What does it mean to be a man? Two surreal Mandarin plays tackle the toxic mindset of masculinity about what it means to be a man today.

Are you any less of a man if you don’t shout, swear, or display an unrelenting libido?Toxic masculinity is placed in the spotlight in W!ld Rice’s double bill of new Mandarin works for this year’s Singapore Theatre Festival, with both plays, interestingly enough, tackling perspectives of what it means to be a Singaporean Chinese male, and taking on distinctly surreal slants in their staging.

招: When The Cold Wind Blows

Written by Neo Hai Bin and directed by Thong Pei Qin, When The Cold Wind Blows is a play that takes us on an introspective journey into the mind of 3SG (NS) Xavier Ong (Joshua Lim), who is about to end his NS obligations with his final year of reservist. But things aren’t as easy as he thinks, as Xavier finds himself waking up in a familiar nightmare where his only companion is a mysterious Man (Joel Low) dressed in army attire. Forced to confront the demons of his past, Xavier’s only way out of this dream is when he comes clean and admits to the guilt that has been haunting him for ten long years. 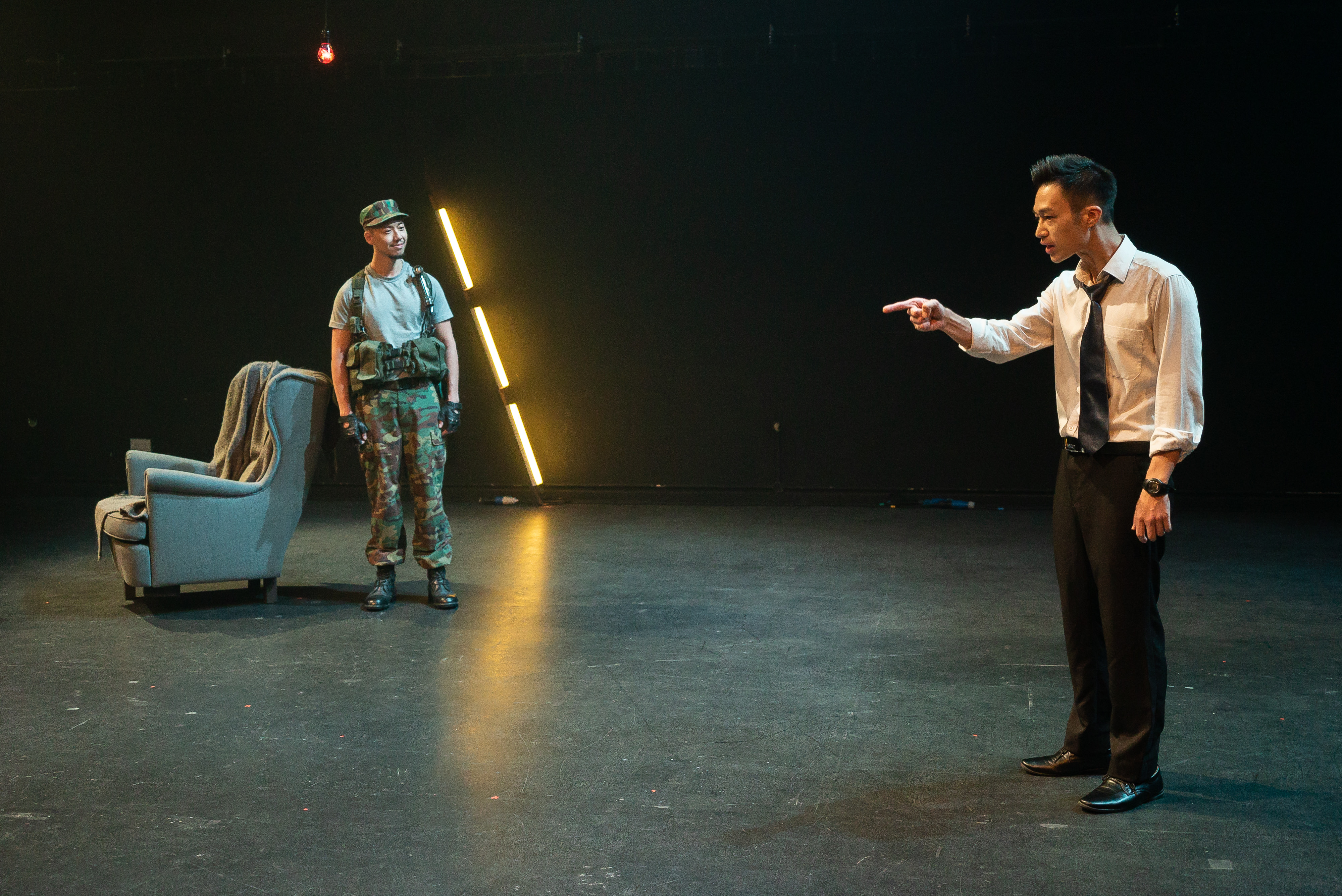 When the Cold Wind Blows shows some interesting ideas up Hai Bin’s sleeve, but as a script, still requires greater clarity, more nuance and better pacing to fully communicate its central narrative and unravel its themes of power and toxic masculinity. Nonetheless, Joshua’s performance brings out a sharpness to Hai Bin’s bold treatment of the subject matter that will leave anyone who’s been through Tekong reeling from the impact. There is the disturbing sense that Xavier is experiencing an almost painful Jekyll and Hyde style transformation each time we see him goaded into admitting his past, highlighting how the army has bred an expectation within him to abuse his power as a commander, leaving him frustrated when he is unable to due to the new ‘safety measures’. One feels palpably disturbed as we hear Joshua Lim yell ‘DOWN’ again and again before he displays an expression of mixed disgust and horror at himself for having re-presented these traumatic memories, shocked at the vestiges of violence and aggression left within him. Although the identity of the Man is never truly revealed, one assumes that he is the manifestation of Xavier’s guilt and resentment towards the army from the last ten years, mentally trapped and physically restricted by a load bearing vest he can never remove. It is only when he realises the monster he became that he can truly let go and ‘ORD’. 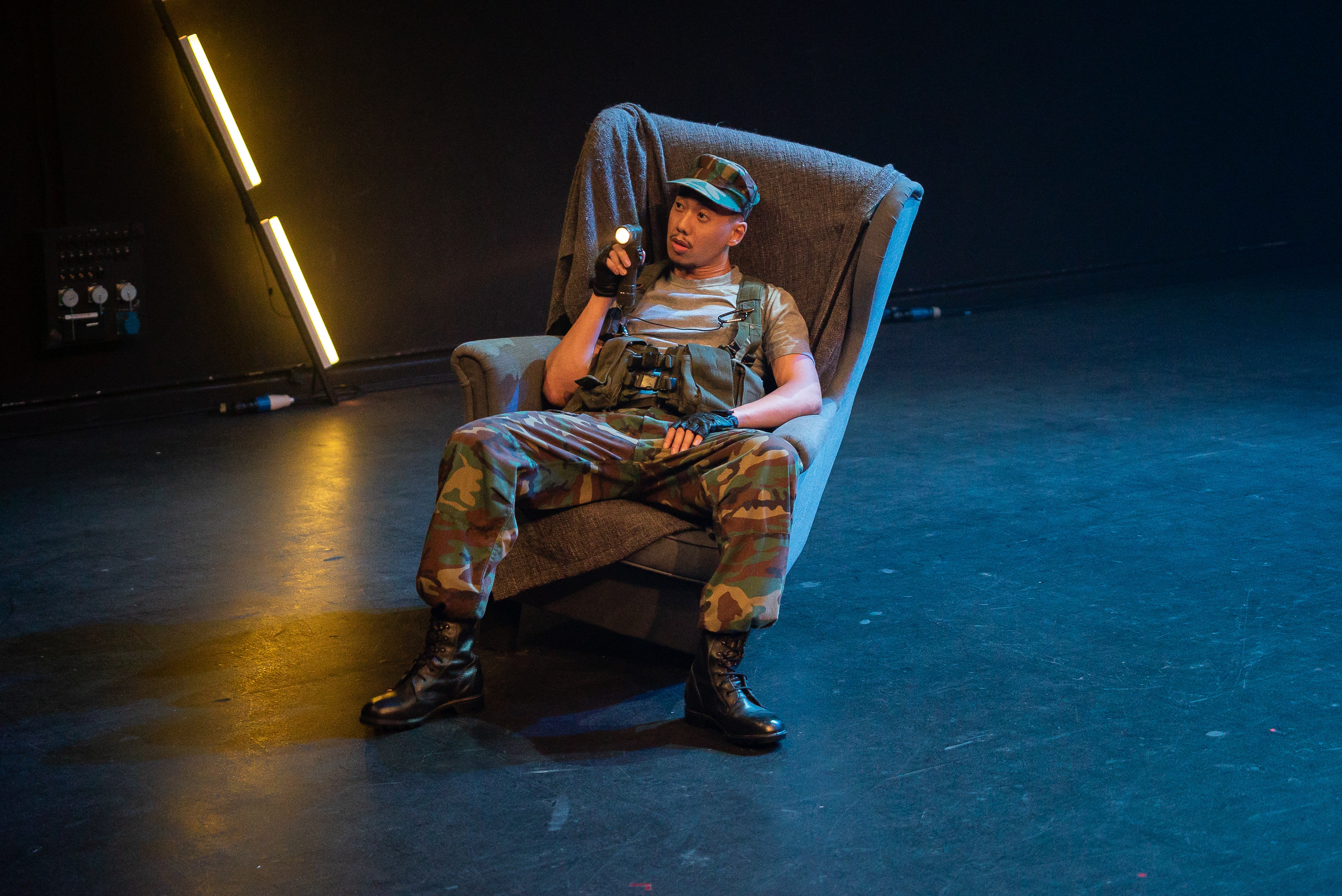 Director Thong Pei Qin makes full use of the Creative Cube to create a sense of entrapment with its high ceilings and almost bare stage that brings out the emptiness of the set (co-ordinated by Deena Shaqinah). This surreal claustrophobia is further brought out when Xavier attempts to escape through all four corners of the stage, failing each time as he comes running back in through another exit, allowing audiences to realise and fear the warped physics of this dream world he’s found himself in. Elements like an unbalanced, three-legged chair, Liu Yonghuay’s eerie and flickering lighting and Daniel Wong’s evocative soundtrack (the sound of waves and a single red light reminiscent of the ferry terminal effectively helps us imagine we’re on Tekong) only add to the uneasy atmosphere felt throughout. 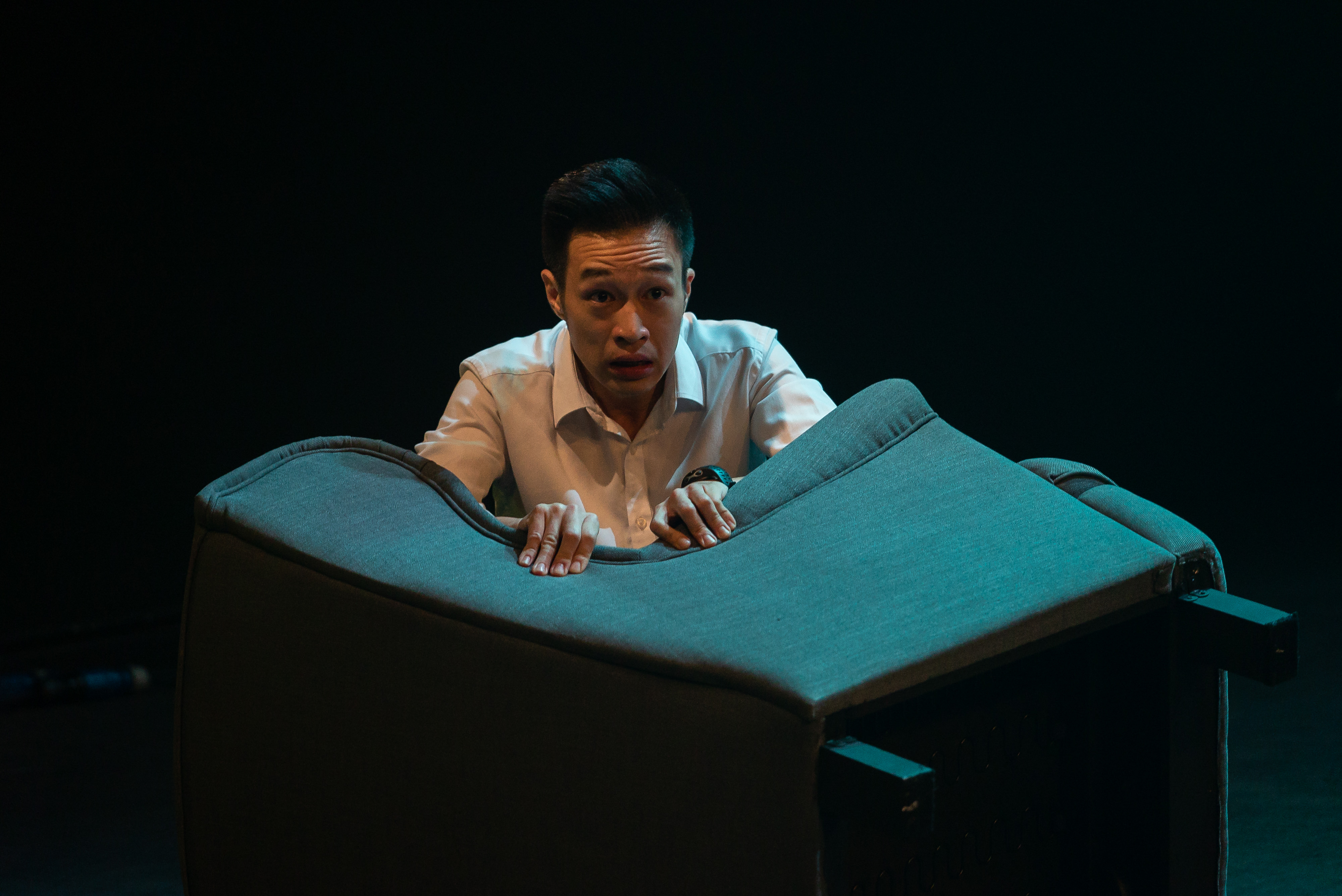 While there is no shortage of Singaporean army plays, what When The Cold Wind Blows offers is a critical look at how our identities, try as we might to hold onto our individuality, are still ultimately shaped by societal pressures as seen through the lens of National Service. Much like its Mandarin title of 招, When The Cold Wind Blows provokes audiences into asking some deep seated questions about the system’s entrenchment of idealised toxic masculinity, manifested through punishment, swear words and obedience to authority. Perhaps then, it is finally time exorcise these anger clouded ghosts of the past, dispelling the monsters we have become, and ushering in a new age of the army where the possession power does not automatically equate abuse.

G.F.E. is probably a term most of us wouldn’t be familiar with, and stands for Girl Friend Experience, a term often used by men to rate how much a prostitute goes above and beyond the sexual act to provide intimacy. Directed by Ric Liu, and written and performed by Chong Woon Yong, G.F.E. is the story of a man who spends a night trawling the streets of Geylang for women. But as the night wears on, no woman seems to suit his tastes, and he begins to recall a string of past failed relationships. 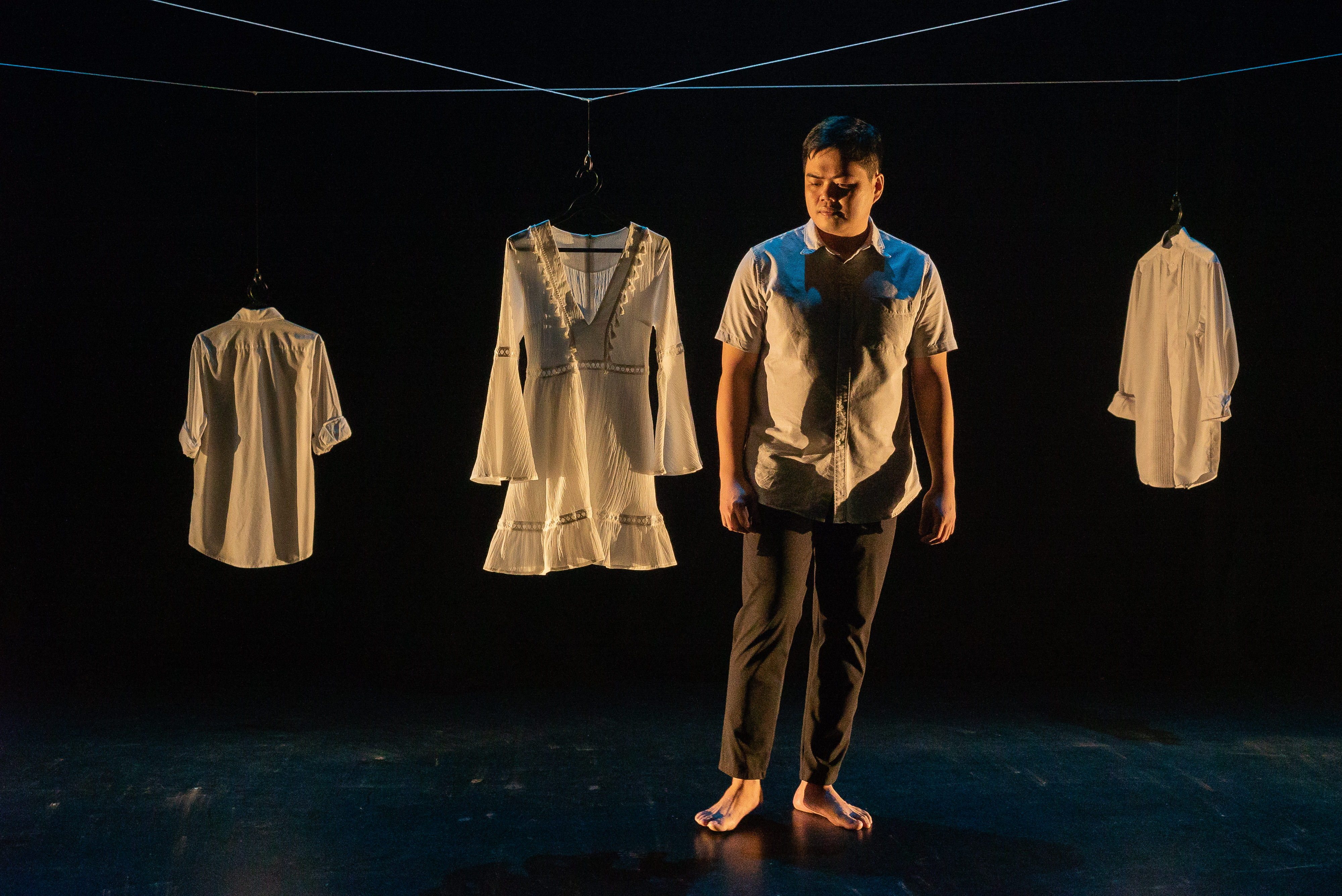 Far lighter in tone than When The Cold Wind Blows, G.F.E. is a play that is essentially by Woon Yong, for Woon Yong. While not necessarily the strongest actor, there is a sincerity and believability to Woon Yong’s performance that allows him to lace the casual language of the play with genuine emotion. But underneath its humorous veneer as he recounts dodgy taxi drivers and girlfriends asking him to ‘fix their computer’, G.F.E. hides a story about an intense loneliness as our protagonist finds himself in solitude at various points throughout his life, unable to forge an emotional connection with the many pale, long haired women he befriends in his life. While sexual pleasure is seen to the be all and end all of a relationship, Woon Yong’s script suggests that the pursuit of something so purely physical can only result in exhaustion, leaving his protagonist waking up to this truth at long last after a sexually futile, but spiritually and emotionally fulfilling night in Geylang. 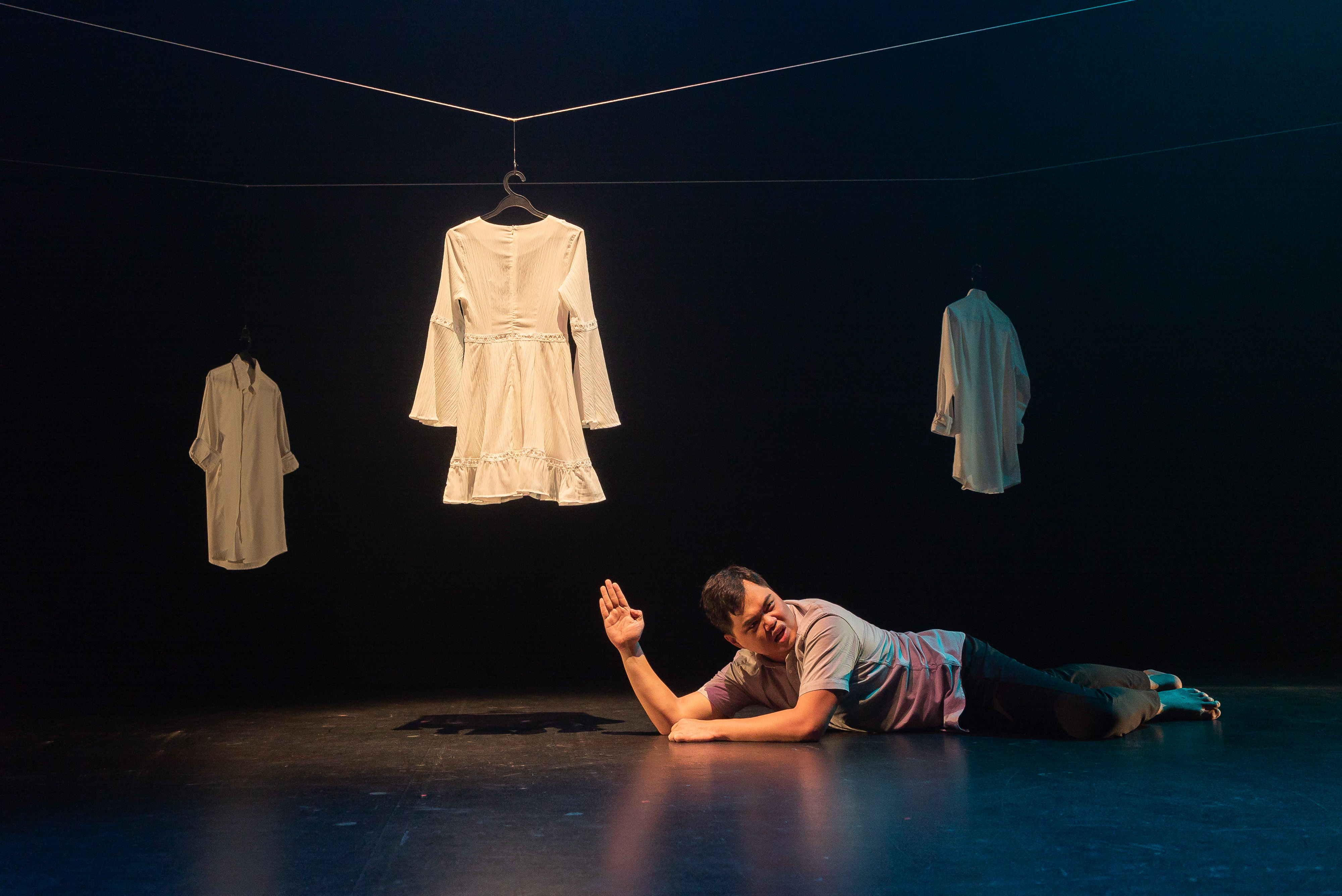 The central storyline of his protagonist’s romp through in Geylang is by far the strongest element of Woon Yong’s script, featuring a strong mix of characters and atmosphere as he describes a mysterious haze that surrounds the district, and a series of both poignant and hilarious events that effectively keep the story entertaining every step of the way. However, the parts of the script deviating from that storyline require further development, with many ‘relationships’ resulting in nothing more than a throwaway line, or are difficult to follow and messy. This results in unclear transitions between timelines, though this is helped somewhat by the carefully programmed lights and sound (also by Liu Yonghuay and Daniel Wong from When The Cold Wind Blows). Ric Liu’s set, comprising various articles of clothing hanging from two clotheslines, brings to mind the back alleys of Geylang, particularly with a single red light in the middle, creating an abstract sense that we are right there with him on his lust-driven adventure. 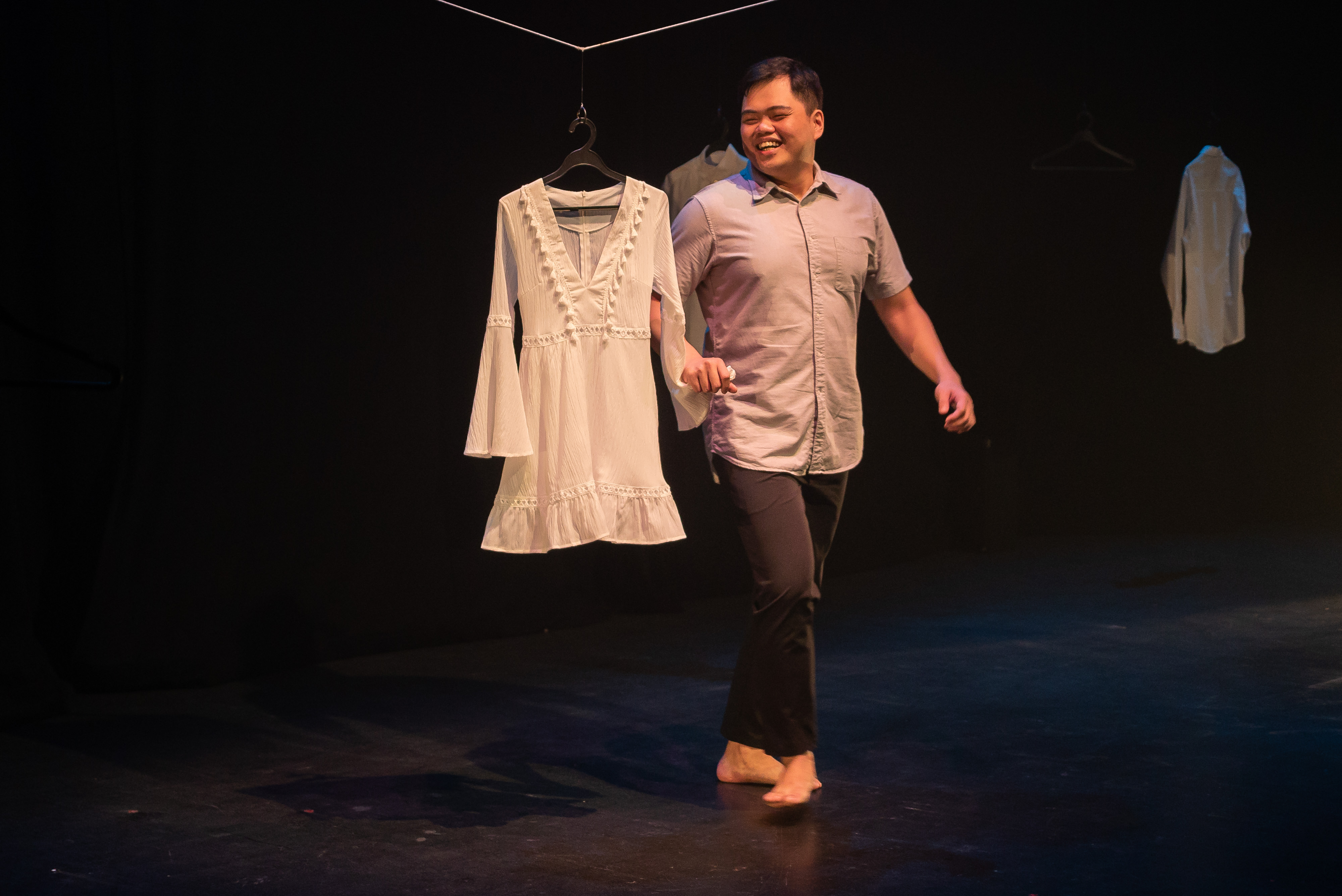 While it gets tangled up in its own narrative structure, at its heart, G.F.E. knows how to tell a simple yet striking story about a man realising that all his life, he’s been looking for love in all the wrong places, and highlights the Singaporean male’s fundamental inability or fear of accessing their emotional core as they obscure it under layers of faux masculinity and chutzpah, at times even bringing out a physical sense of emptiness in our very being. Both 招: When The Cold Wind Blows and G.F.E. still feel like rather raw scripts, requiring tighter structuring and deeper nuance and layering with which they approach their respective subject matter. However, both scripts do show potential to be great if further developed, each showing a contrast in perspectives of life from a straight Chinese male perspective. While each plays deals with completely different challenges of modern manhood, both ultimately reveal the all too real undercurrent of toxic masculinity running through our entire society, leaving us with the question: what does it mean to be a man today?