A brief history of a fictitious communist acts as the starting point for which to deconstruct the very nature of truth itself.

Far too often in the recording of history, tiny details get lost from simple descriptors, to entire accounts of people. The latter in particular is explored in full with Ho Tzu Nyen’s The Mysterious Lai Teck. Based off a former leader of the Malayan Communist Party, The Mysterious Lai Teck comprises a monologue depicting the brief, wondrous life of the titular Lai Teck, if that is even his real name.

Born in Vietnam, Lai Teck is a man of over 30 pseudonyms, enshrouded in a mist of the unknown, the leader of the Malayan Communist Party from 1939 to 1947, and a triple agent for the French, British and Japanese secret police. Over the one hour ‘performance’, we learn of his trials and tribulations going from country to country, and the often morally ambiguous acts he engages in in his rise to the top. 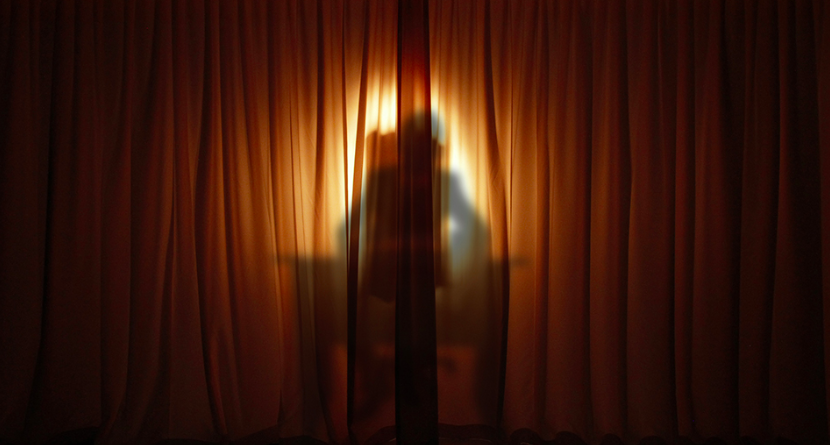 To classify and frame this work as theatre would be a mistake, rather, it is more akin to a visual art piece meets art film, given that no actor performs live, and every element of this show appears to be preprogrammed. The topics of espionage, political intrigue and revolution certainly are interesting ones, but The Mysterious Lai Teck could certainly afford to be more succinct and tight in its execution. The show begins with the sound of Lai Teck’s voice (Tay Kong Hui) as he begins telling his tale, before the curtains parting to reveal even more curtains. These curtains then act as the ‘screen’ for a lengthy sequence of more curtains opening, seemingly endless as they never unveil anything other than more curtains behind.

From time to time, we see a silhouette of Lai Teck behind the curtains, hunched over a desk and writing, before he disappears again, emphasising his mysterious, unknowable nature. On occasion, there is a hint of other figures lurking behind these curtains, while the colours warp and change differ from curtain to curtain to fit the mood of the narrative, along with the unnerving, dramatic score by Black to Comm. One imagines one’s self to be trapped in an endless prelude, a waking nightmare where we are kept on the edge of our seats for the ‘show’ to finally begin, but threatens never to, the truth forever obscured behind these endless curtains.

When the second set of curtains finally part, we see the man himself at last, or, a representation of him at least. Onstage, we see only an animatronic, with a video of Tay Kong Hui mapped onto its face and body, as he continues to tell his tale. Along with how the projections never entirely match the movements, the animatronic finds itself firmly in the realm of the incredibly uncomfortable uncanny valley. What we are left with at the end of the monologue, initially, is a distinct sense of unease once the lights come on, uncertain whether to clap or not, as we see the animatronic in its entirety, unmoving and unliving.

But upon thinking a little deeper on what The Mysterious Lai Teck is trying to achieve, one in fact thinks of how this presentation represents the tip of the iceberg of and even larger fictitious narrative that remains unsaid, with more to be gained from reading between the lines than the script itself. On account of Lai Teck being an animatronic, the entire show encapsulates the idea of constructed narrative, his voiceover an unreliable narrator as we remain unsure if we are to be able to trust him, having heard an account of questionable truth from a voice that may not even ‘be’ him.

One found one’s self reflecting on the ways in which truth has been suppressed across history, wondering about the extent to which our own knowledge base is completely insufficient given our ignorance or lack of critical thinking. With a concept surrounding a controversial figure, likely persecuted due to his associations with unsavoury political parties, this ominous feeling of dread is even more powerfully evoked as we view it in context of new laws with the potential to be abused, that those in power would see fit to shape reality and memory itself in their view. In all, The Mysterious Lai Teck is an oddly prescient, timely work that moves us to question everything we know and believe, one that spurs us to wonder about the authenticity of history itself.

The Mysterious Lai Teck ran from 17th to 19th May 2019 at the SOTA Drama Theatre.