Absurd, dystopian world where thoughts and language are thrown into disarray.

The soundtrack of Mr Sign is fascinating enough as it is, comprising a musical score that takes influences and samples from Tchaikovsky’s Swan Lake and Indonesian gamelan to traditional Korean trot music. The performance begins slow, as Adrian Tan’s single fluorescent light descends from the ceiling to illuminate Brandon Khoo as he dances alone under it, smooth, individualistic and confident, before the other dancers, dressed in black coats and pants, enter the stage, moving at a breakneck pace as they perform in unison. 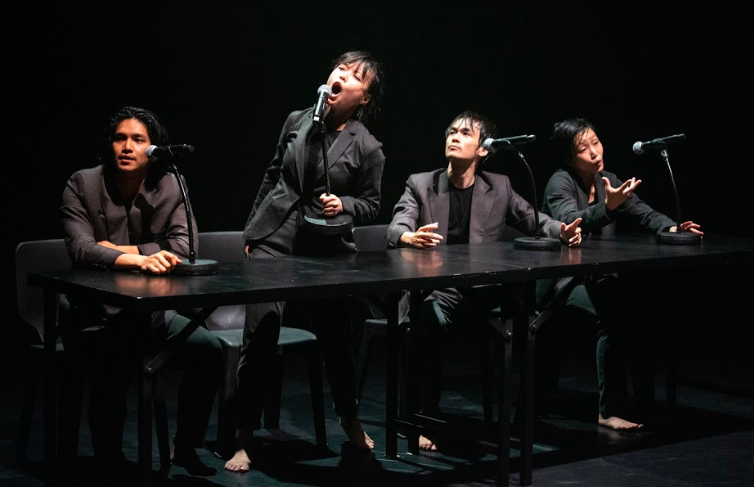 It becomes evident then, that Mr Sign revolves around issues of individual identity and pressure to conform to society’s standards. This is especially interesting once traditional dance and movement are eschewed in the performance to introduce elements of text and speech. A small screen lowers onto the stage, playing footage of a dancer speaking silently, while the others don gas masks behind the screen, struggling to follow and move as one. We think of how their own breathing is mandated by the mask, and their own sense of identity erased by the mask as they are all forced to move the same, feel the same, speak the same. Listening to a version of Tchaikovsky’s Swan Lake here corrupted by construction site-like piston pounding, there is a distinct sense of incongruousness between the elegance of the original track and the image we see before us, like a hellish corps de ballet forced into performing.

The text form is used to great success, especially as the dancers adopt a strange interview panel style set-up – on the left side of the stage, a spotlight on Brandon Khoo as he controls Nah Jieying like a ventriloquist puppet, speaking into a microphone. On the right side – the other four dancers, seated at a long table as they respond and discuss issues with Brandon/Jieying. Very little of this actually makes logical sense, with what results ending up sounding like absurd speech, perhaps a commentary on how it is corrupt politics that comes across as completely nonsensical, even to each other. Breaking away from Brandon, Jieying leaps onto the table and begins to dance furiously, as she rebels and tries to find her voice once again.

We realise then that it is individual actions that are at times even more disturbing than groupthink – when dancers step out of conformity to attempt to express themselves, it is not artistry or beauty they perform, but violence and animalistic movements. We see this as they attempt to strangle the people in the screen out of frustration, or their movements become agitated, forced and explosive as they move about the stage. Society itself is unbearable for these few who cannot conform, but as they are a disruption to this world, they must be culled. What results is a group of conformers as they lay out a table, factory-like as the string of ‘patients’ line-up and one after another, are ‘operated’ on as we hear drilling and hammering, literally ‘fixing’ them so all will be better. 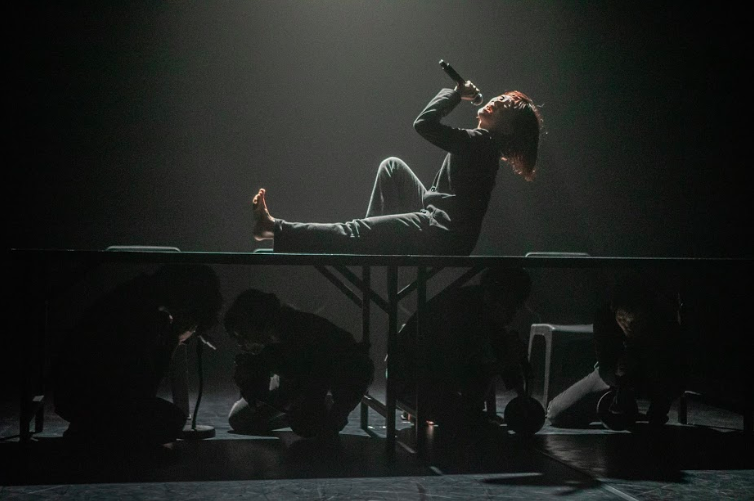 It’s no surprise that with such an enigmatic, haunting, energetic choreography, Kim Jae Duk remains T.H.E’s Resident Choreographer to this day. There are plenty of moments during Mr Sign that are so disturbing and out of this world, we cannot help but giggle at the dark humour that results from the dancers as they speak gibberish, bicker amongst each other over who truly is the legendary and mysterious ‘Mr Sign’, or end up literally carried around. But behind the absurdity is a painful recognition that the Orwellian world Mr Sign takes place in is but an exaggerated mirror of our own society.

As much as we wish to be and express the full extent of ourselves, there are limitations to this as the powers that be dictate the boundaries what we can or cannot be, from our movements right down to our very thoughts. Mr Sign is as relevant now as it was 6 years ago, leaving us only with fear and loathing in our hearts as we return to real life, more keenly aware than ever of the invisible strings that bind us, as we carry on with our daily routine, locked into expectations and unspoken rules to conform to.

Mr Sign played on 19th July 2019 at the Esplanade Theatre Studio as part of the M1 Contact Contemporary Dance Festival 2019.