Cycles of abuse can be a real bitch to break out of in this harrowing, pitch black play.

It’s not often that you leave a play feeling utterly corrupted by how dark it is, and if any company has done it, it’s Taiwan’s M.O.V.E. Theatre. Directed by Fu Hong-Zheng and written by Lin Meng-Huan, A Dog’s House is pitch black in tone, as we enter the home of two siblings (Wally Gau and Wang Yueh-chen) and observe them as their lives are disrupted by the sudden appearance of a long lost older brother (Liu Chia-chi).

But it’s not long before this seemingly innocuous plot of  A Dog’s House goes from quirky exploration of sibling relations to something far more akin to a descent into psychosis. A Dog’s House constantly toes the boundary between man and beast – as its title suggests, one can see the siblings as actual dogs, in addition to reading them as humans. There is always something incredibly animal about them, made obvious by the pet collars they wear. With a strong background in physical theatre, the actors of M.O.V.E. Theatre achieve this viscerally, from nipping at each other when they play with each other, to lapping at bowls of cereal in the absence of utensils, bringing to mind the extremes to which humans can descend to when placed in hostile, uncaring environments. 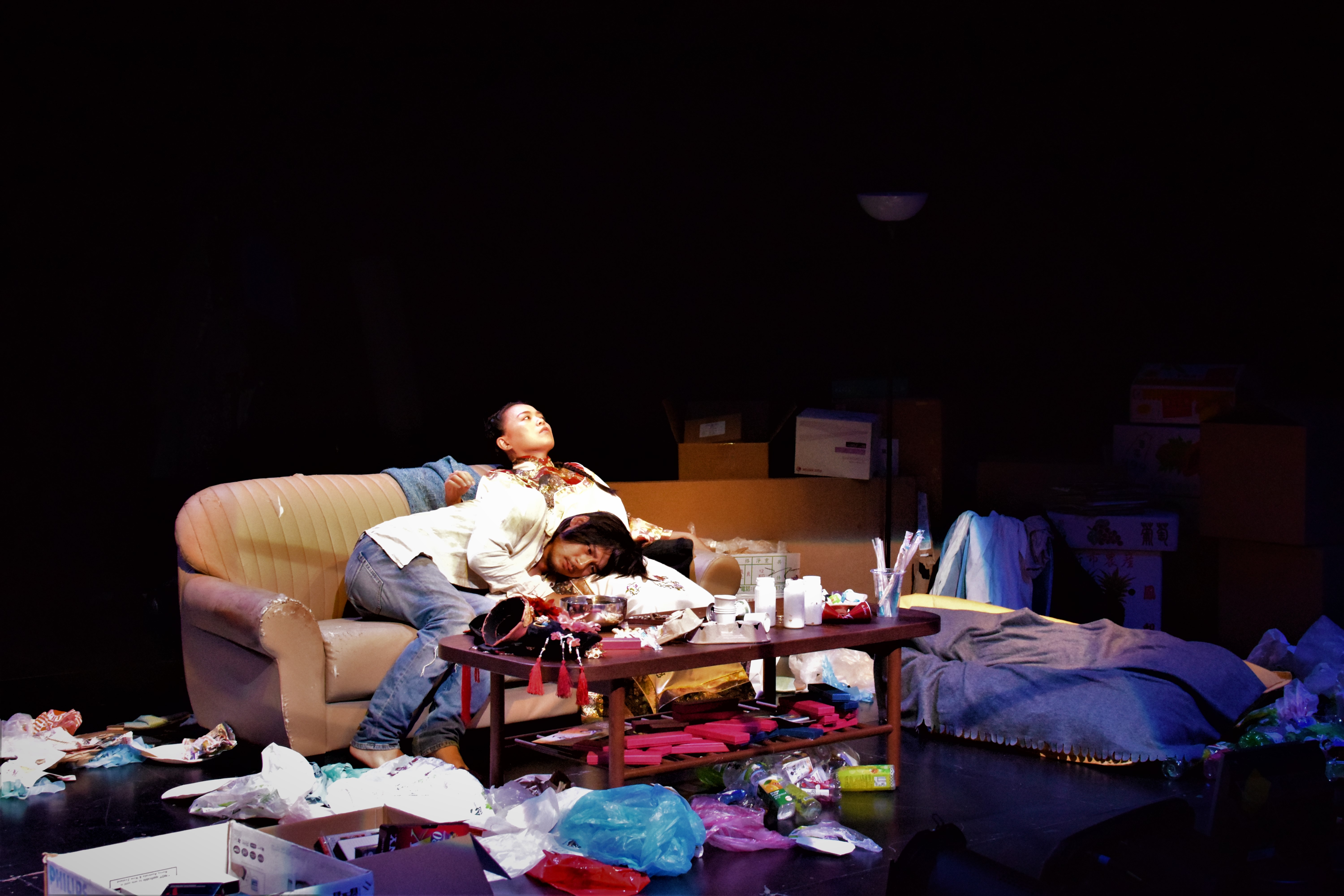 With a home as messy as the one designed by Liao Yin-chiao, it’s no wonder they’re constantly in a fragile state of mind, reflecting the equally messy psyche they’ve been thrust into. The Theatre Practice’s black box space is transformed into a hoarding nightmare, with trash strewn everywhere, cardboard boxes littering the floor and the intensely discomforting feeling of being in a nigh unliveable space. Living quite literally like animals, cups are deemed too dirty to drink out of, while food comes in the form of uncooked instant noodles. There is the sense of crushing ennui and hopelessness that comes out in full with the set’s help, such as how when the younger brother watches television, the lights are dimmed, with only a cold flicker and the sound of random programmes emitting as he gazes, dead-eyed and directly right at us, as if in a hypnotic trance. 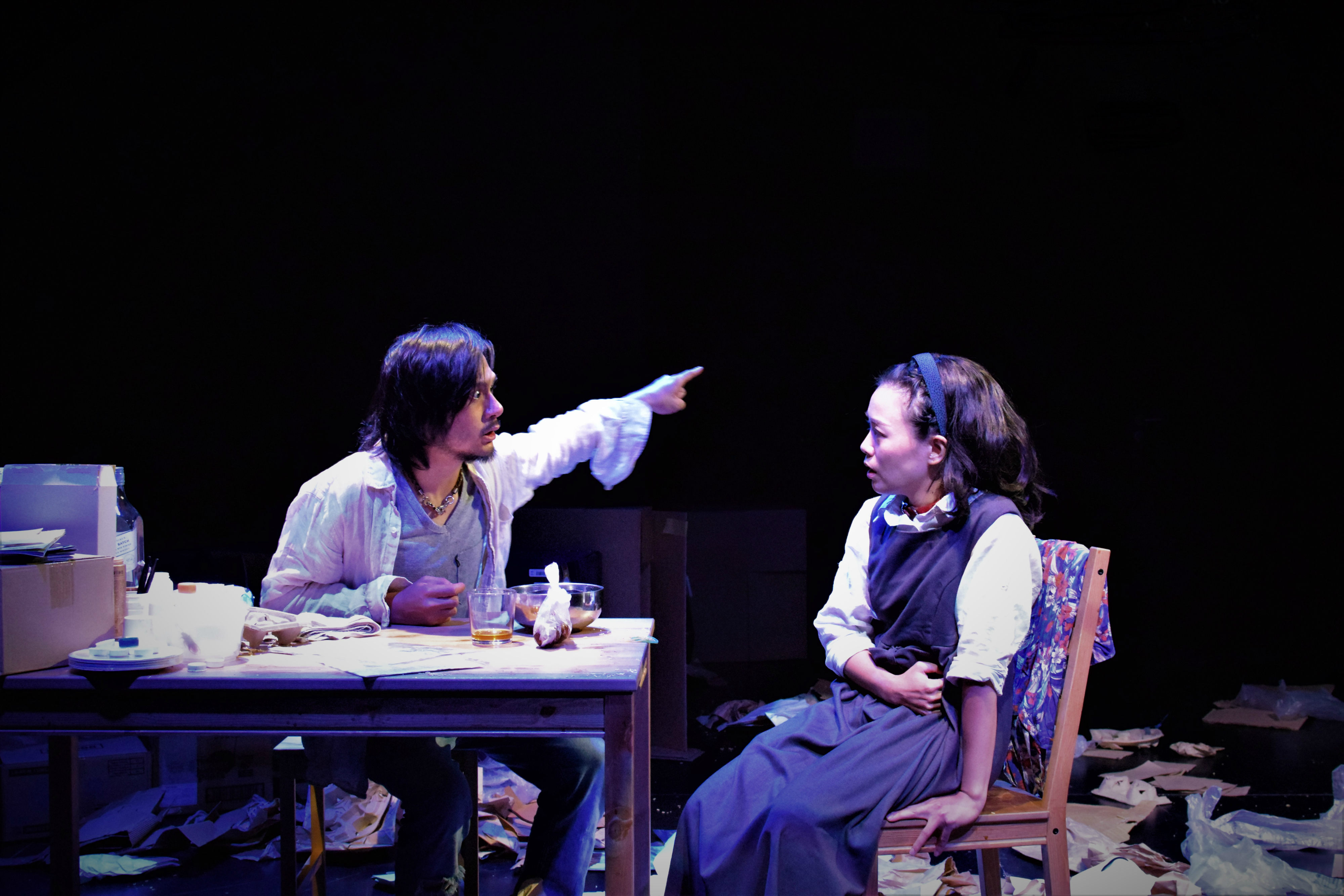 The world of A Dog’s House feels like it teeters on the edge of the absurd, as we experience a sense of entrapment and inescapability throughout the play. The younger brother is onstage in each and every scene – confined to the house, he is unable to leave even when he wants to. Wally Gau does an especially good job of playing the character with a heavy emotional weight, as if in a heady stupor, slouching and on the verge of collapse. The sister enjoys more mobility, but her trips outside are restricted to afternoon teas with their ‘mother’. Often, she’s dressed up for fetish-y theme parties too, dressed in costumes from a Qing Dynasty getup, to a sailor uniform. Their older brother is akin to an invisible ghost that haunts the house, defined by their fractured memories of him and pained shouts from his room. When he finally makes his appearance, he is so far gone in the mind that he is incapable of human speech, rabid and bestial. 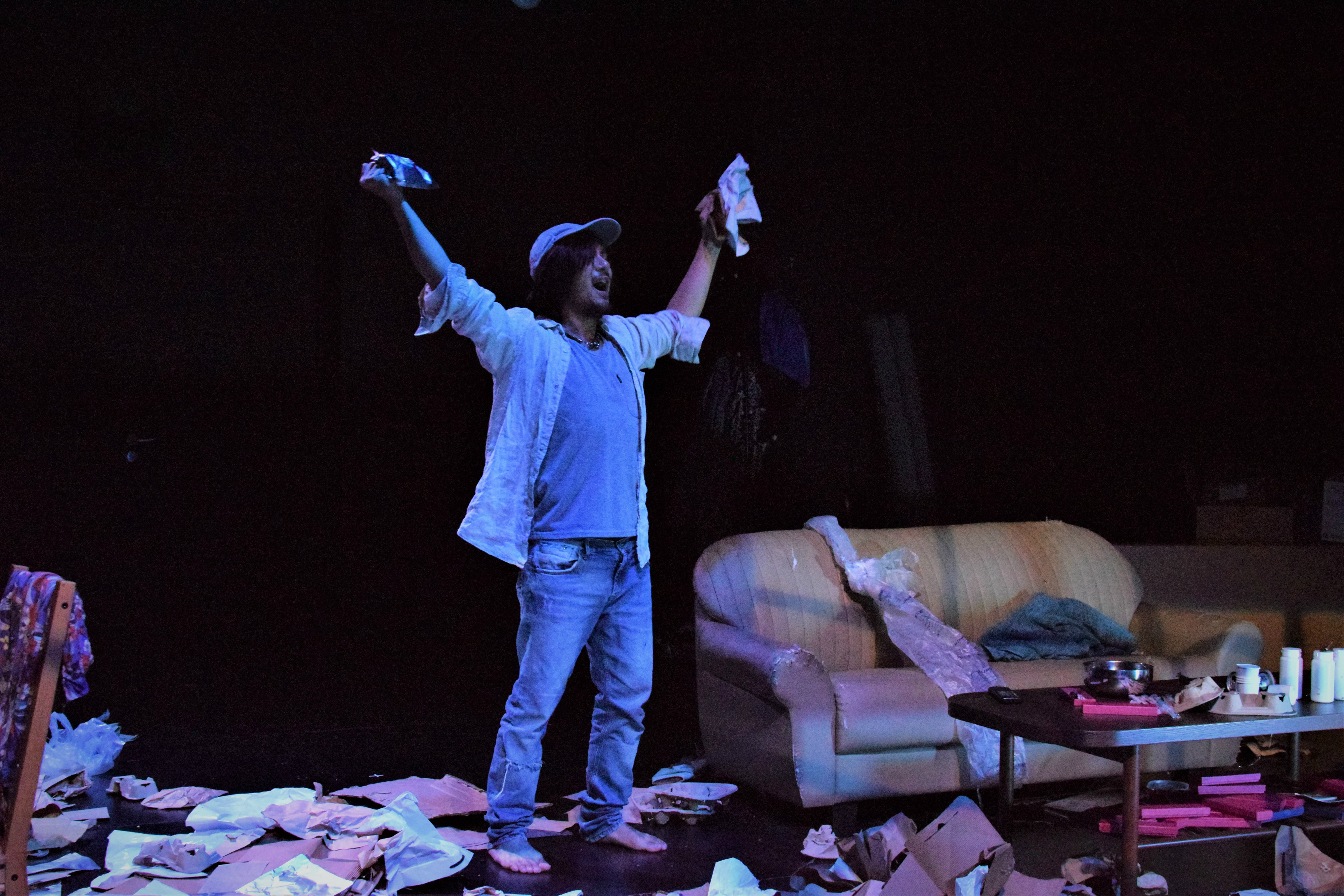 For most of the play, the action is limited to conversations between the two siblings as they discuss their family dynamics and question both past and future. The act of watching A Dog’s House can feel maddeningly slow at times, which only helps audiences understand the existential suffering its characters go through onstage. There is an underlying sense of fear that manifests in uncomfortable silences, where knocks at the door send the siblings jumping, suggesting a far wider-ranging sense of paranoia that affects the house and beyond. As the play goes on, it feels as if it’s constantly competing with itself to outdo the shock factor, going from themes of abandonment to dismemberment, incest to infanticide, dialing up the imagery to the point audiences become numb to it. It’s harrowing to witness scenes of bloodshed and attempted rape, along with traumatic incidents described in graphic detail, and it feels like the siblings have been through so much, they’re left as mere shells of their former selves. 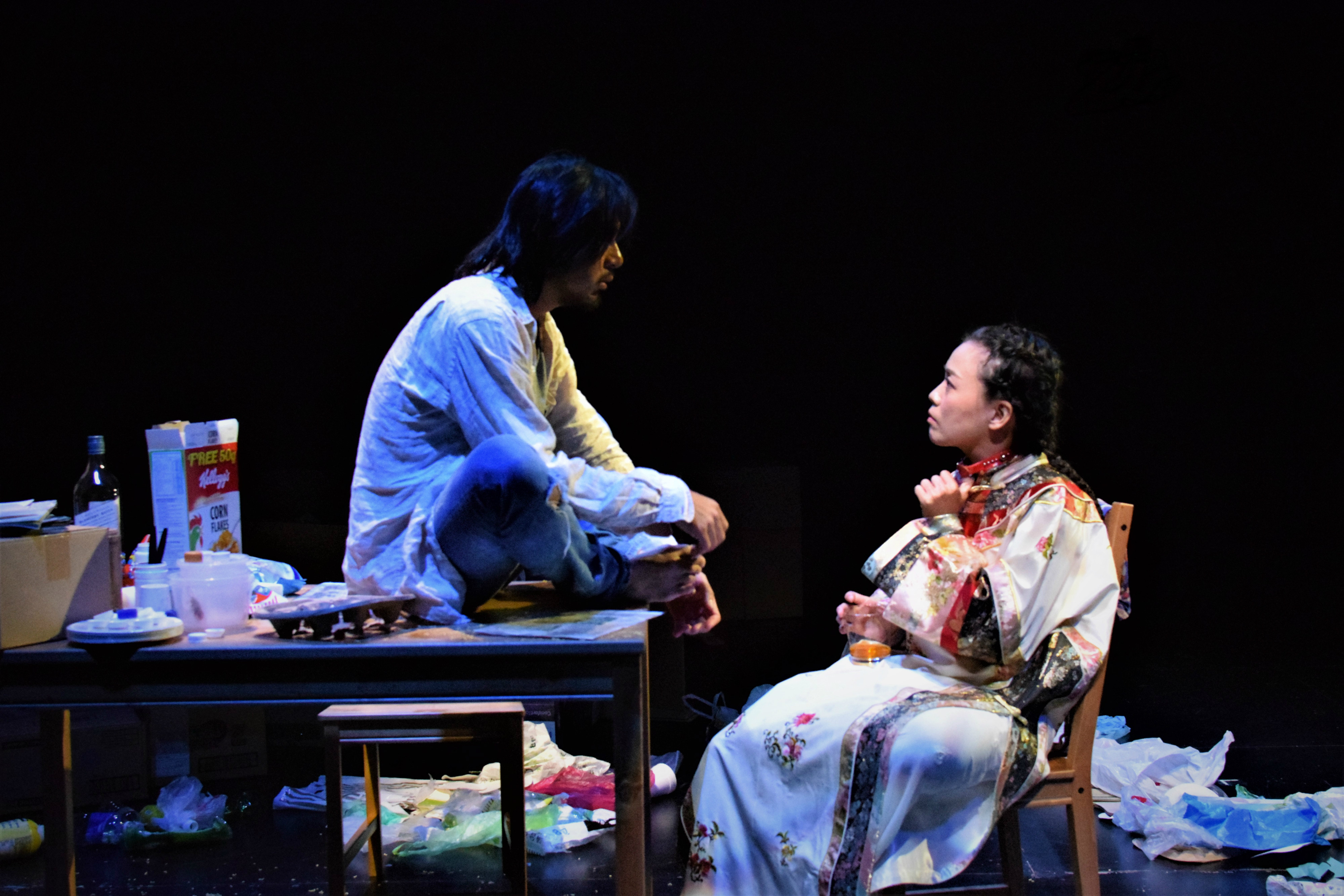 Fundamentally though, one message in particular remains crystal clear. With the sheer amount of physical and psychological suffering all three siblings go through, it becomes clear that as much as they want to escape this tragic life, this is a physical impossibility. Confined to the house both physically and psychologically, the younger brother has long accepted their doom. Meanwhile, his sister, still desperate to run away and better her life, is torn between loyalty to her brother, and her escape plans only end in disappointment. Playing the sister, Wang Yueh-Chen’s portrayal of her downfall from hopeful, spunky individual to complete surrender provokes only despair in audiences. There is little to no comfort offered by the script, and it’s all we can do to grimace in horror as their lives spiral into the inevitably tragic. 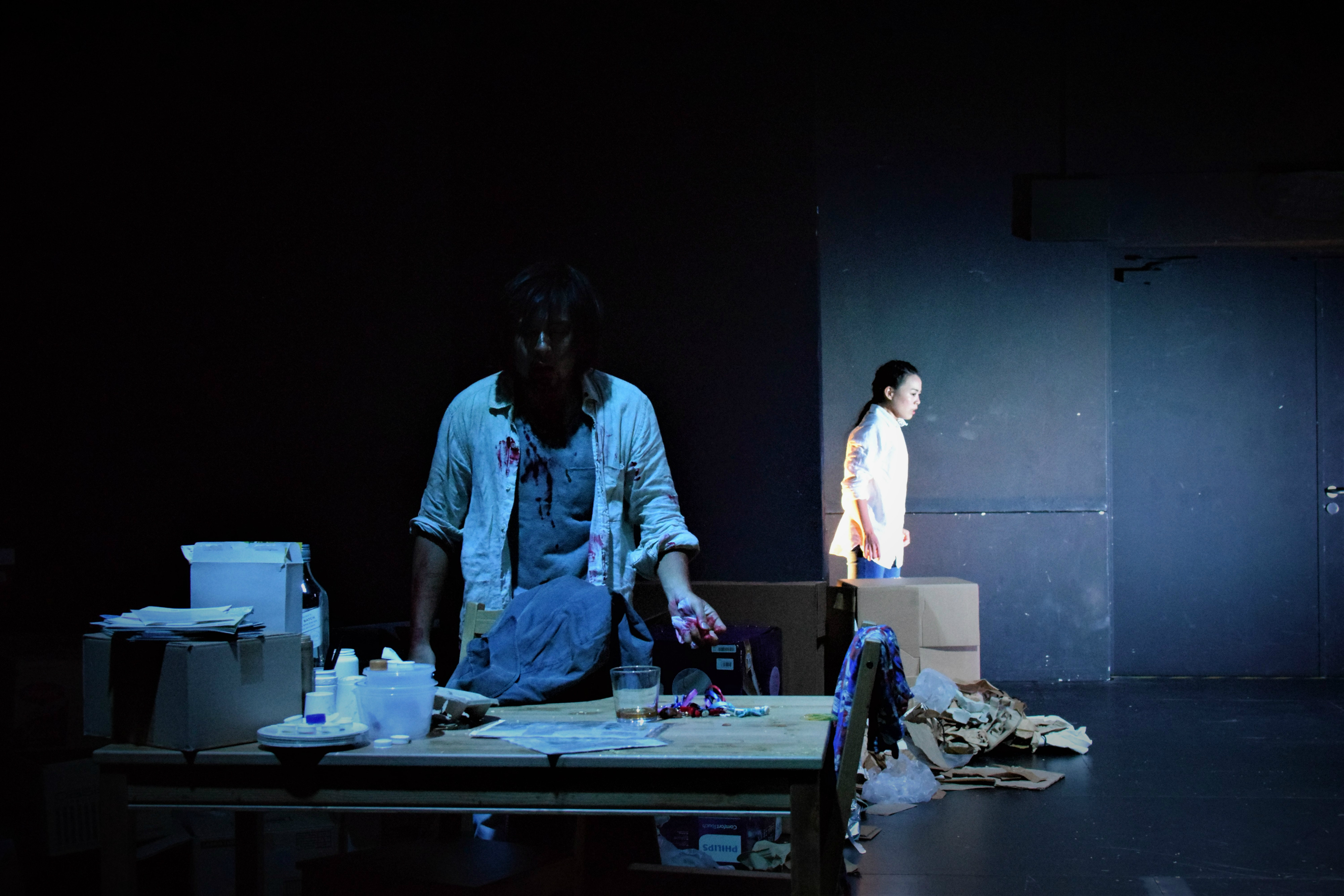 One could even take this message one step further and liken this entrapment to the sense of abandonment and dislocation the current ‘strawberry generation’ feels, as they inherit a world bereft of hope, with little motivation to change the future with an unending air of pessimism, begrudgingly accepting their lot and living out their final days in squalor. A Dog’s House is a play that bears down on its audiences to make them feel the sheer weight of its issues and constant dread for the future. For its characters, death seems to be the only true way out of their suffering once and for all. As the cast takes their final bow, we are left with only a heavy heart and wonder how long it’ll take before we too fall to despair, and let our bestial natures rule instead of facing this cruel world any further.