★★★★☆ (Performance attended 8/1/20)
Docu-drama in the form of a live podcast reminds us how difficult it is to mend deep-set rifts, and the politicised effects these have on the most ordinary of activities.

Part of the joy of Fringe is how it offers a platform to showcase non-traditional theatre forms of all kinds. Of these, it is bluemouth inc.’s Café Sarajevo that plays around with a range of mediums to produce a work of docu-drama that hits surprisingly hard in its portrayal of a woman trying to make sense of the strife that continues plaguing the world. 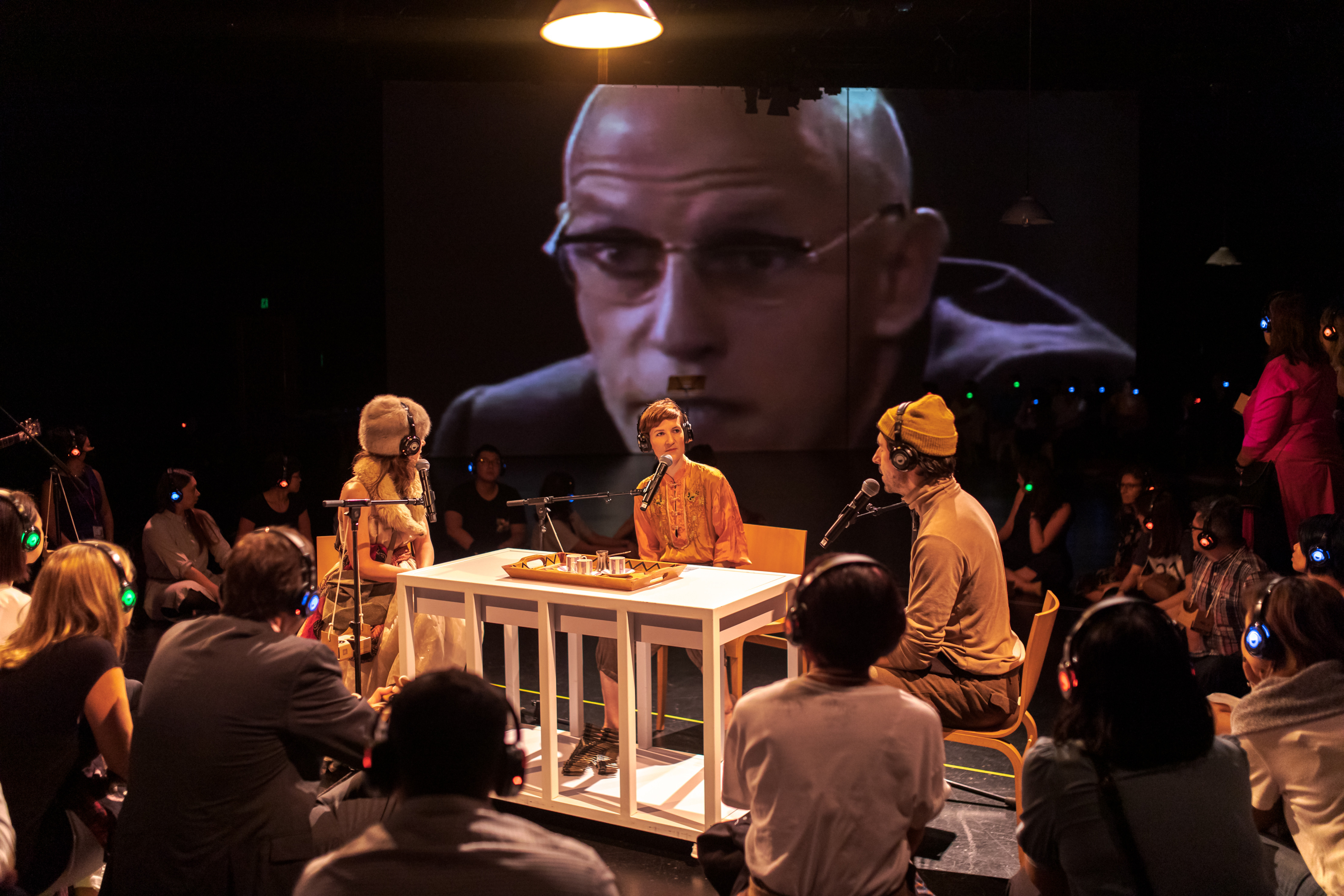 Café Sarajevo was born out of an examination into a historical debate between Noam Chomsky and Michel Foucault from 1970, questioning whether there was a common human nature. Why then do wars and divides continue to persist, if we can all recognise something inherently human that connects us all? With the looming threat of Trump’s inauguration in 2016, Lucy Simic decided to find an escape. That came in the form of a cross-country journey, where she traveled to her father’s birthplace in Bosnia. Café Sarajevo then, charts that journey in the form of a live podcast (complete with table and mics), with Lucy herself and husband Stephen O’Connell as ‘guests’ while hosted by Peter Musante and Mariel Marshall. 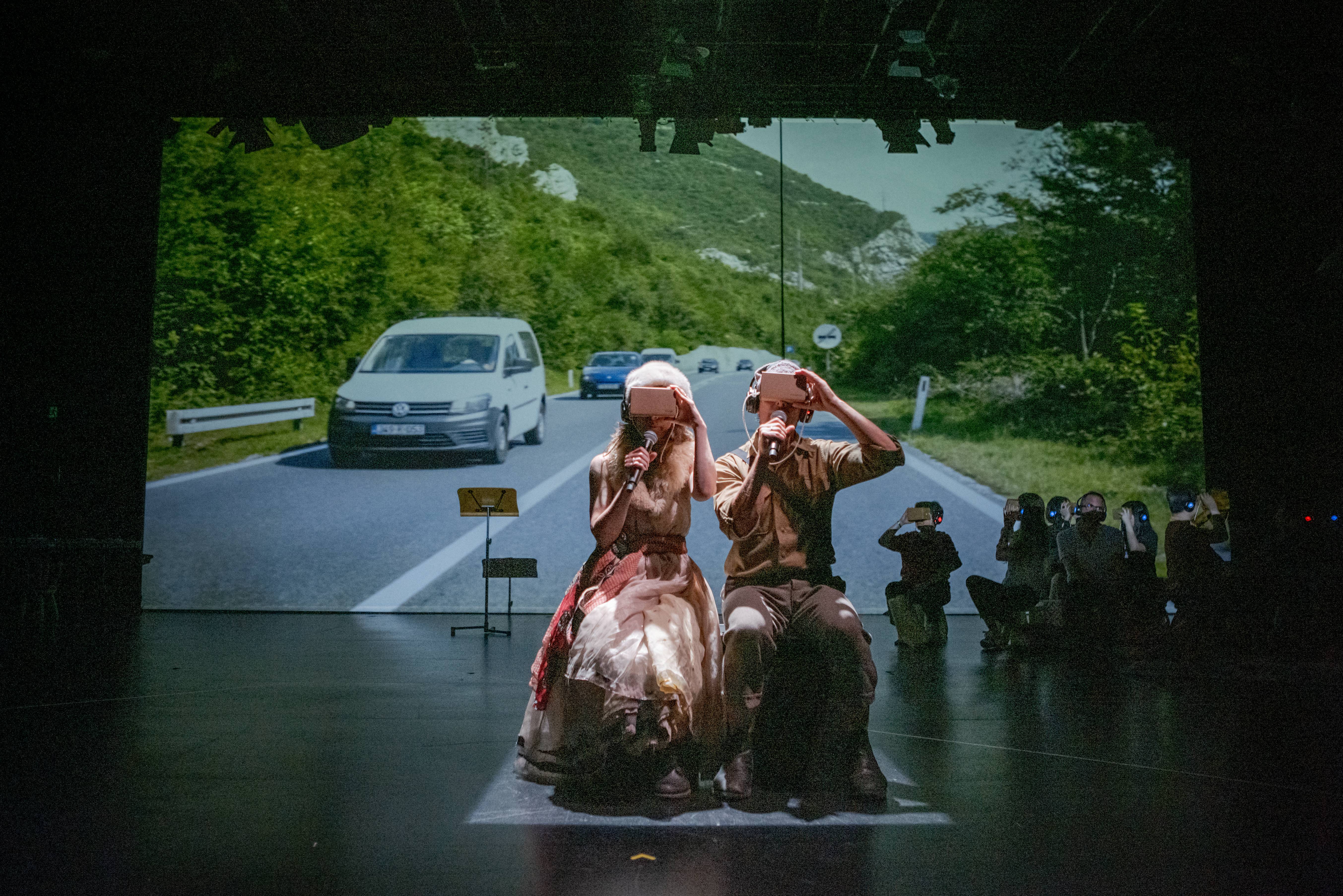 Split into three ‘acts’, audience members are directed and moved around the mostly empty theatre studio as Lucy and Stephen travel from place to place, recounting their experiences and thoughts on each city. Throughout, Café Sarajevo feels like an intimate experience, as if we’re in a tiny studio with our hosts and guests, complete with live music and cues for ‘breaks’. With each of us given a pair of headphones, each time performers speak, their voices are fed directly into our ears, while videos projected on the theatre walls provide the backdrop to various locations. Cardboard goggles offer an even more immersive experience, as audience members glimpse scenes from the couple’s road trip via moments captured via 360° video. The theatre space transforms before our very eyes thanks to the intensity and vivacity of the performances, and we can almost believe that we are taken to these places, on the brink of breathing the air, feeling the road beneath our feet. 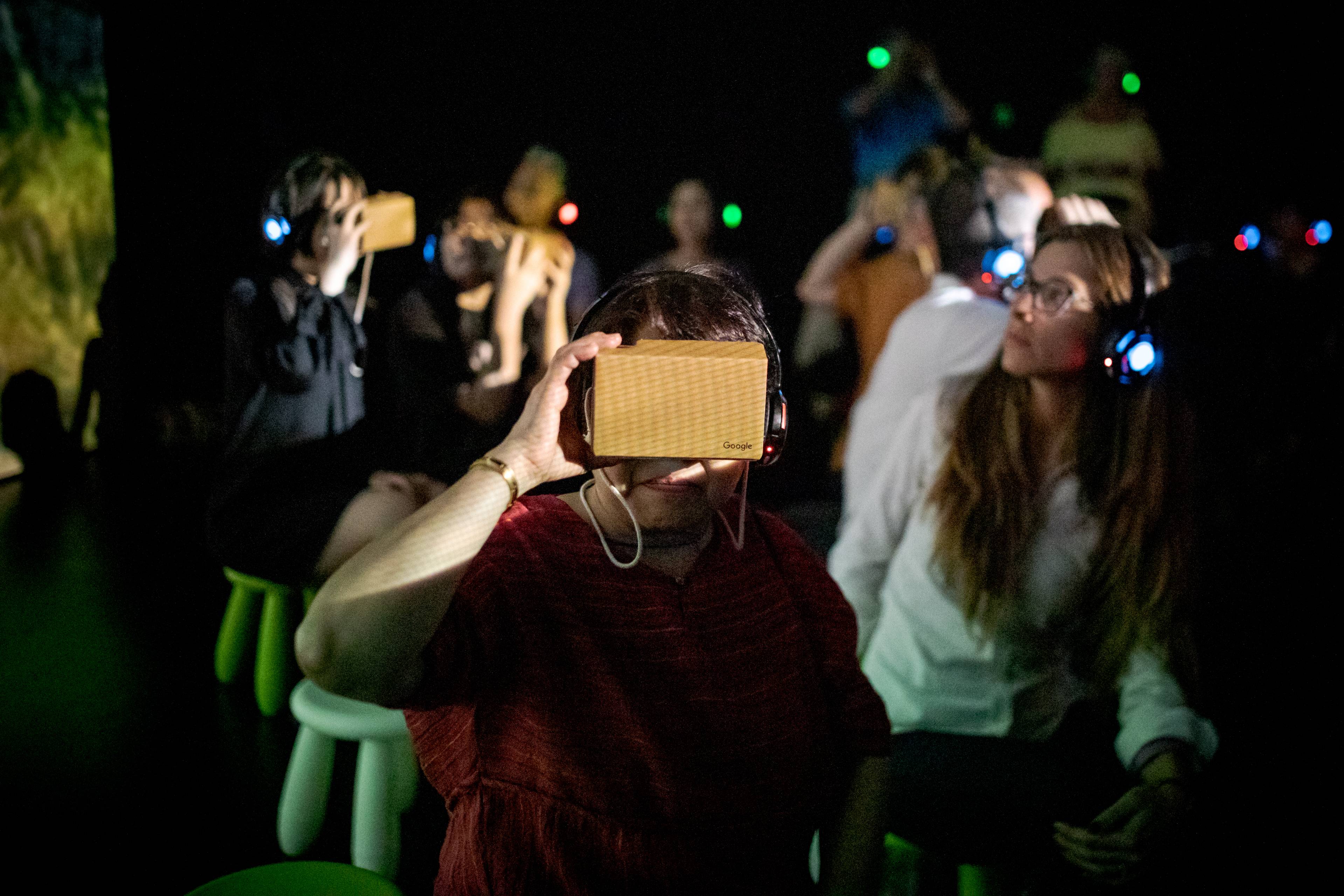 What initially begins as a whimsical cross-country adventure turns into something much more somber and reflective the more the couple acquaints themselves with each city. In Sarajevo, Lucy realises she has made a faux pas when she notes how even the way one refers to the coffee informs of your alliances. Images are visceral and descriptions vivid – the mention of the Sarajevo Rose, a bleak memorial of a bloody ‘flower’ as crafted by pouring red resin into the scars left by mortar shells that have taken lives, hits especially hard, and etches itself into our memory. A tour guide takes the couple on a bumpy ride where they are horrified to see grenades and landmines casually littered on the ground. 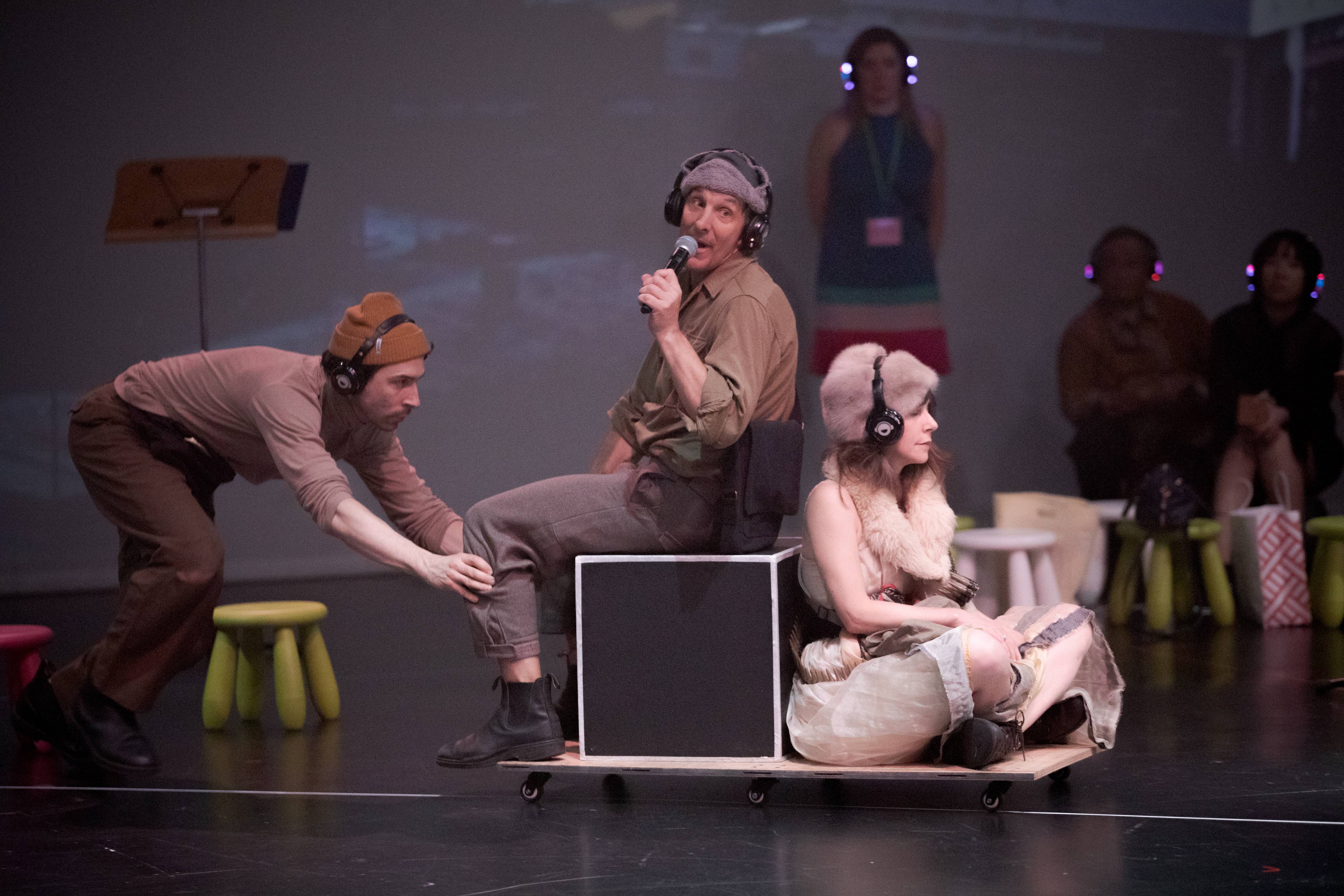 Even in the moments of brief respite, as Lucy and Stephen allow themselves to dance at a club or sing karaoke, these are laced with an undertone of the political. We realise that for cities that have been so traumatised by their history of conflict, it becomes almost impossible to lead a peaceful life. All of this culminates in a soccer match, where the end of the game is marked with the boom of fireworks, mistaken at first for the sound of shells exploding instead. We may take in the natural beauty of their trip, but feel the dull pain of those they encounter, those who live with war on a daily basis, and this trip that Lucy and Stephen go on is less holiday than it is an awakening to how much the world around them has been poisoned by hate. 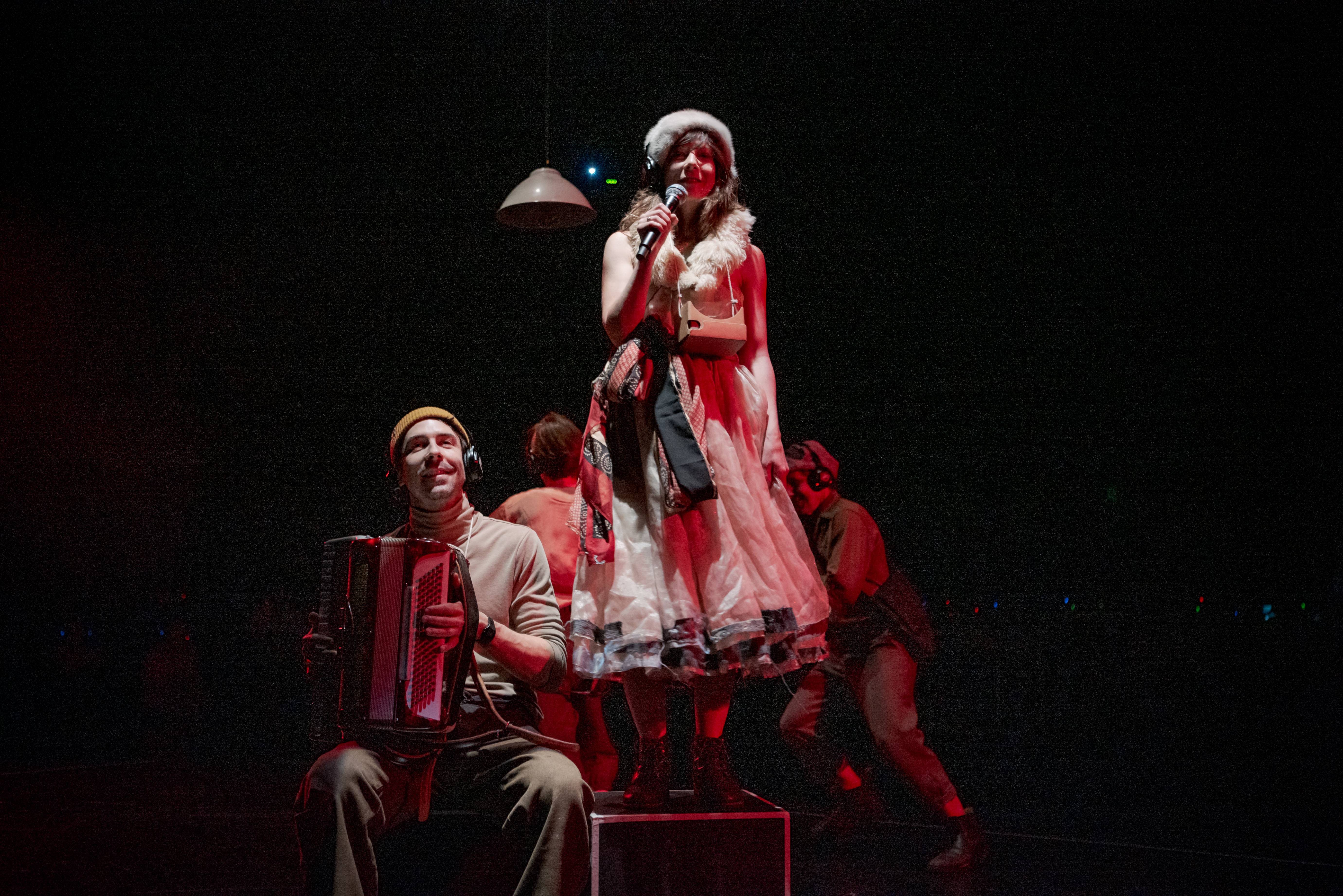 With its live podcast form, audience participation elements, and use of video, performance and technology, there is a level of immersion and involvement on our part that makes us feel as if we are following and discovering just as Lucy and Stephen are, and makes a difficult topic accessible, to feel and understand that deep inside, all these people just want to live as normal a life as possible, yet somehow, cannot set aside their differences. Café Sarajevo’s ultimate message is simple – once war has broken out, it is difficult, nearly impossible to recover from the wounds it leaves behind for generations to come. It serves to offer us a dose of caffeine to wake us up to the realities of these conflicts happening all around us, and wants us to know, through Lucy’s travels, that this is not the future of the world we want to live in.

Café Sarajevo runs from 8th to 12th January 2020 at the Esplanade Theatre Studio as part of the 2020 M1 Singapore Fringe Festival. Tickets available from SISTIC