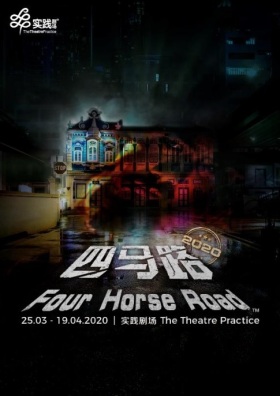 When The Theatre Practice produced Four Horse Road back in 2018, the project was a sprawling, massive undertaking. Taking its cues from immersive theatre and heavily vested in a firm foundation of research of the actual Waterloo Street to do justice to its history, the promenade theatre production was unlike anything the local theatre scene had ever seen before.

Now, they’re bringing the remarkable production back for a second run this March, bigger and better than ever, and promising that even repeat audiences will have something new to look forward to. Taking on 150 years of Waterloo Street’s history, Four Horse Road (also the historical name of Waterloo Street) transforms The Theatre Practice and two other heritage buildings into a time travelling experience, as audiences are led around the buildings and surrounding premises to encounter characters and scenes plucked straight from history, unveiling secrets and unsolved mysteries of the area.

Directed by Kuo Jian Hong, and written by Jonathan Lim, with extensive research from Practice’s researcher Sim Xin Yi, a total of 10 stories were selected to be developed into scenes for the 2018 version. These include brand new scenes and reworked stories to feature in the 2020 production (with all the scenes taking place in The Theatre Practice completely new). Taking on the role of observers or even participants of each of these scenes, audience members will be split across different routes to take on different paths throughout the night, meaning that your experience on one occasion could differ entirely from the next.

Playwright Jonathan Lim has had a long personal history with the street. Once a Catholic High student, Lim studied in the old campus (now 51 Waterloo), served in the army in a camp nearby, and continued to work closely with theatre groups residing in the arts and heritage district today. “I’ve always loved projects that use theatre to excavate the past to illuminate the present. But a historical project about this neighbourhood thrills me even more!” says Lim.

Being such an ambitious project, Four Horse Road also boasts an all-star cast and creative team working on it, with over 60 members collaborating to run 1500 metres of sound and lighting cables across 10 locations within the three buildings, replicating a 1970s bus set, or simply timing coordination from scene to scene, making this one of Practice’s most intricate productions, and one of the largest scale promenade theatre productions in Singapore to date.

A total of 27 cast members from diverse backgrounds will also be featured, including Sugie Phua, Al-Matin Yatim, Dwayne Lau, Grace Kalaiselvi, Goh Guat Kian, Ric Liu, Ethel Yap, Andrew Mowatt and more. Over 10 different languages and Chinese dialects feature in the script, along with various accents tied to each historical era to lend an air of authenticity to each scene.

As for why the history of Waterloo Street warrants enough attention to be made into such a piece, beyond the objectively interesting stories the place’s history contains, Waterloo Street has also been home to Practice for the past 31 years, ever since its origins at Stamford Arts Centre to its current location. “We wanted to do something to connect with this street, and to engage with our neighbours,” says director and Practice Artistic Director Kuo. “Waterloo Street was one of the oldest and most vibrant hotspots of Singapore. People from multifaceted backgrounds left their marks on this street, leaving us a diversity of religions, cultures, and of course, stories. We have been given this unique vantage point to discover our past through different lenses, to create meaning by experiencing how the past connects to our present.”

Waterloo Street then, represents diversity in all its forms, attempting to subvert recorded history’s status as the voice of a single person and re-presenting it as the voice of many, celebrating clashing perspectives, unsolved mysteries and most importantly, the people at the heart of it. Add Kuo: “As Singaporeans, or even people who have chosen to make Singapore their home, we need to know who we are a bit better. There are a lot of missing links in us understanding who we are. We are much more diverse and complex than what our history books have been telling us.”

Besides the show itself, the Practice Tuckshop will also be organising three special editions of their signature Recess Time programme in March and April. Focusing on heritage and intergenerationality, each session will showcase invited chefs and home cooks (Makan Masters) as they put their creative expressions on a plate, while foodies gather over a delicious 3-course meal. In the Four Horse Road editions, the Makan Masters will explore their relationship with the past through their recipes and food, and share their stories with participants.