LONDON – ‘Fair’ is a loaded word, not only referring to issues of justice, but subtly referencing one’s skin tone as well. Winner of the 2019 Pulitzer Prize for Drama, Jackie Sibblies Drury’s Fairview makes its UK premiere at the Young Vic, tackling the black living experience in modern day America, and exposing the racial prejudice and politics that continue to determine the state of the world today. 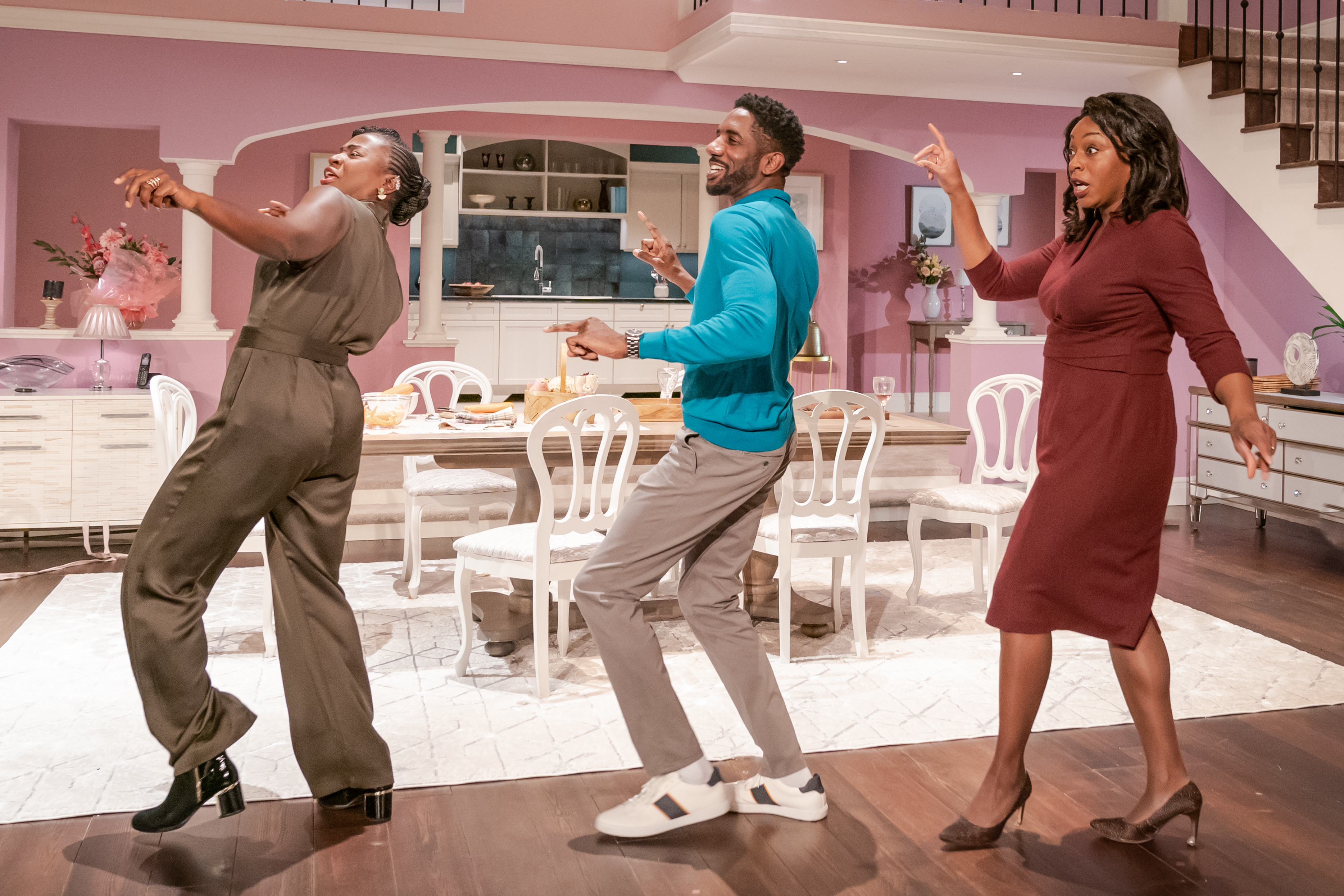 Directed by Nadia Latif, right from its outset, Fairview is positioned as a live television show. Following the African-American Frasier family as they gather to celebrate Grandma’s birthday, the play takes place in a lavish, grand upper-middle class home filled with proper furnishing (designed by Tom Scutt). We see hostess Beverly (Nicola Hughes) nervously cutting carrots in the living room, wanting, needing everything to go smoothly. Her anxiety is so high, even the static on the radio puts her off. 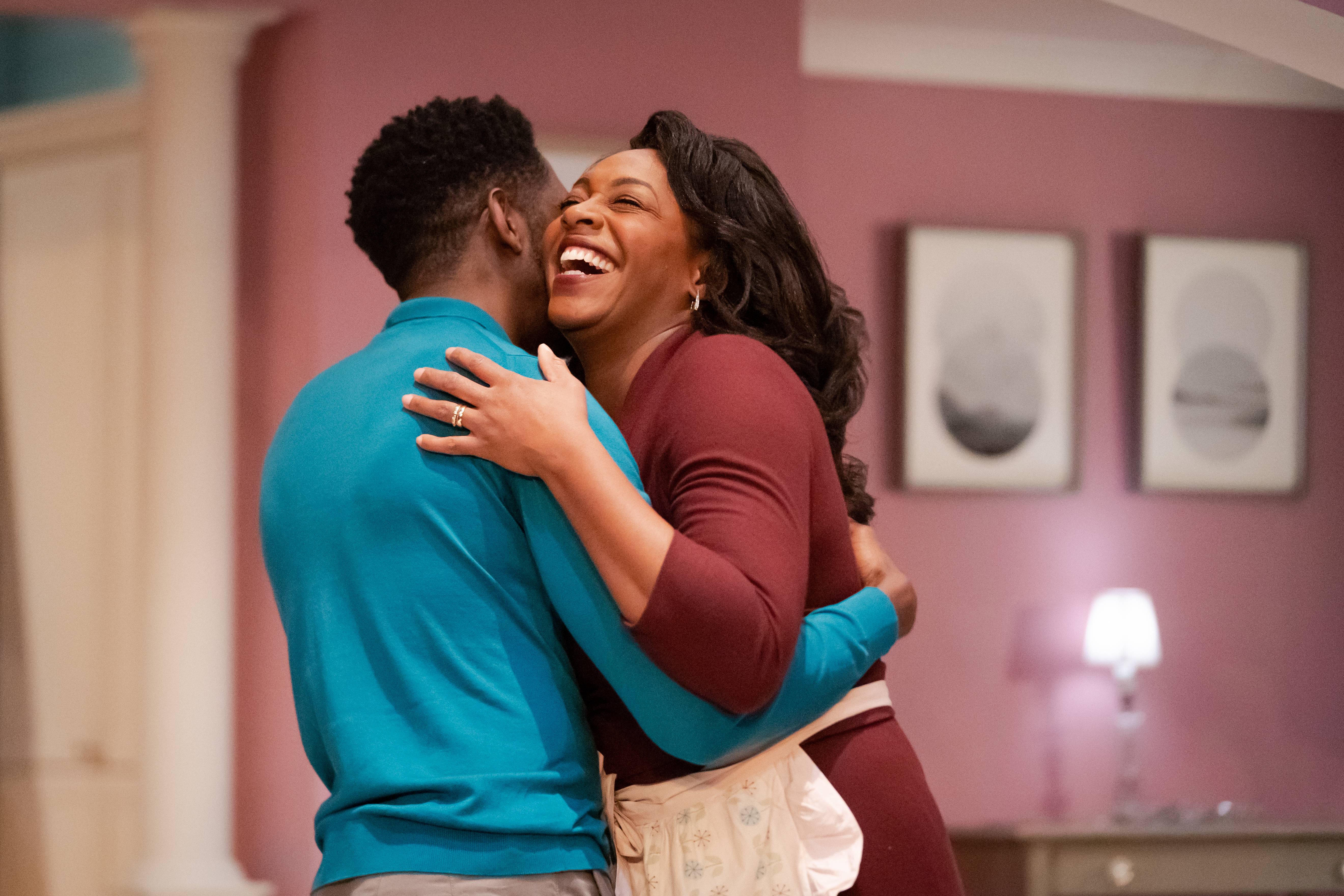 At the heart of Fairview is family. Dayton (Rhashan Stone), Beverly’s husband, attempts to comfort her to no avail, while Beverly’s diva-like sister Jasmine (Naana Agyei-Ampadu) arrives on the scene, sassy, expressive and superior. Jasmine offers her advice as the cool aunt to Beverly’s daughter Keisha (Donna Banya, who shares a secret handshake with her) on a gap year, much to Beverly’s chagrin, and Grandma has managed to lock herself in the bedroom. Things are disastrous, to say the least. 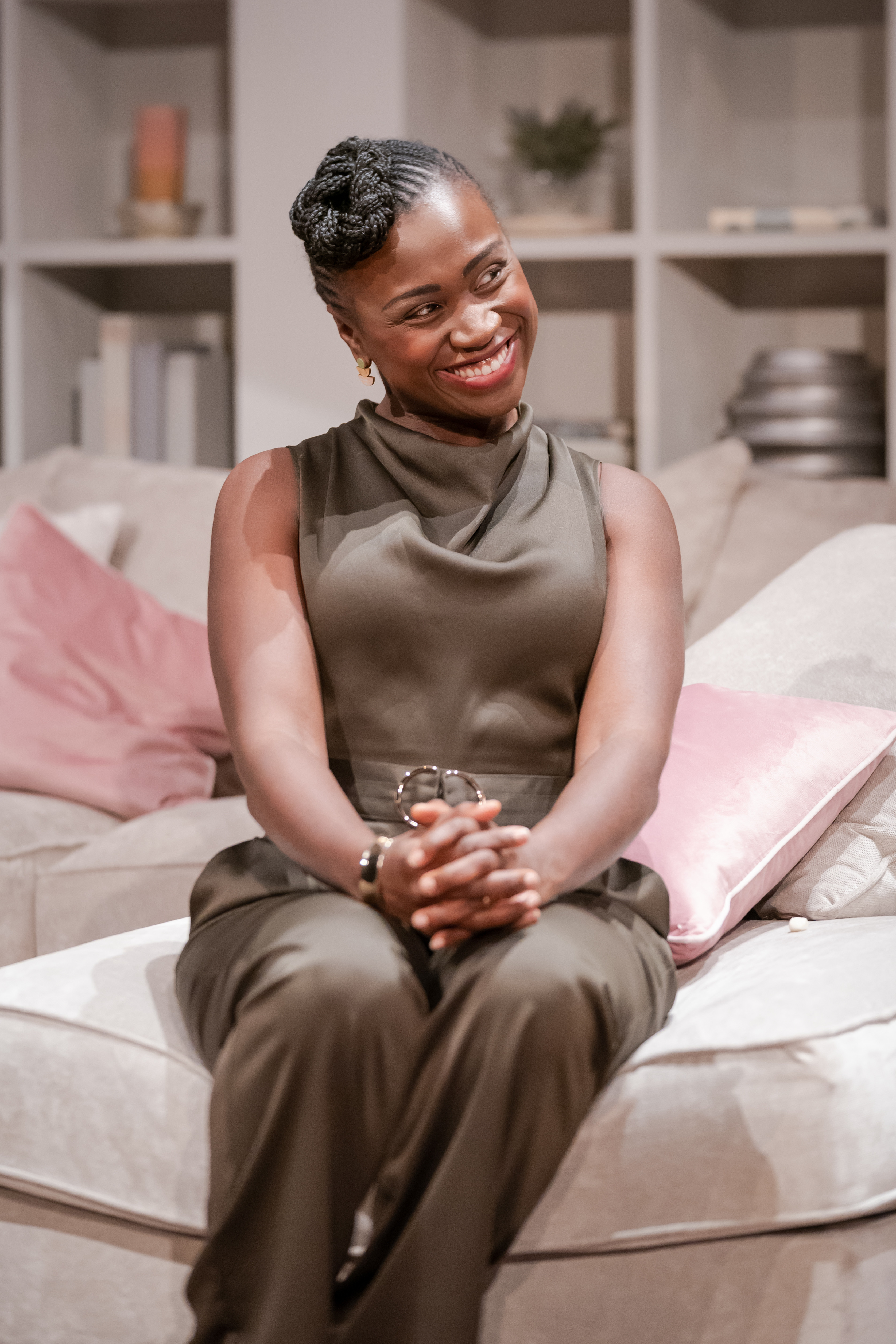 Drury’s script is smart, quirky and warm, bringing out the essence of each family member’s dynamics with the other. While on the surface, Beverly and Jasmine’s relationship seems tenuous, their complicated state of sisterhood is brought out in full when they bond over their shared memory of Grandma’s last birthday (recalling her dressed up in a gown and turban). As Keisha joins them, dancing down the stairs, the sisters find solace in each other once again, reminded of Grandma’s dance moves in her younger days. 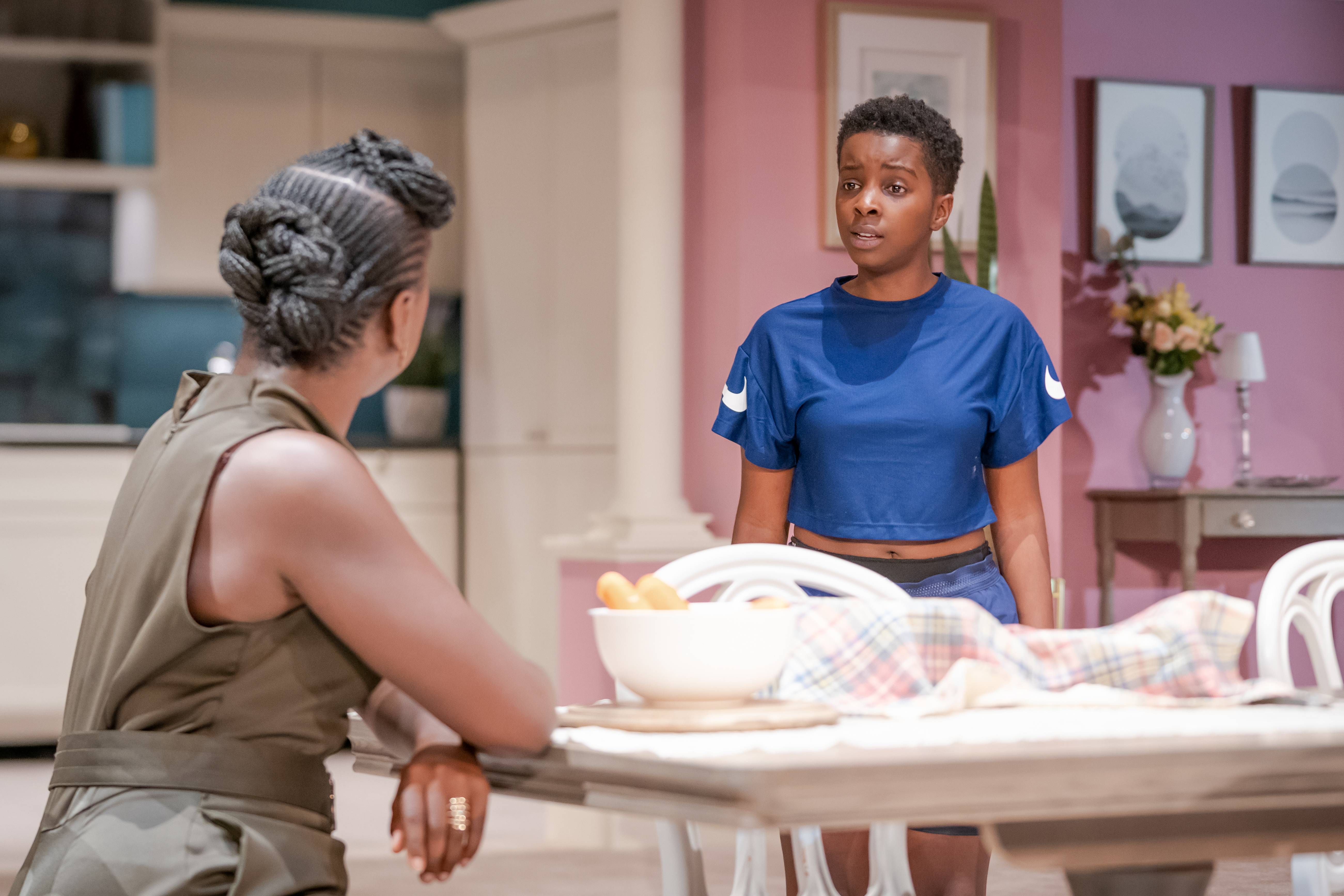 As one disaster after another continues to pile up, from a missed flight to a troubling secret about to be revealed by Keisha, this family reunion gone wrong only has a single outcome: a complete breakdown. Beverly exclaims that everything will be fine before fainting, and the family stands around her. This is a family that has so much pressure mounting on them and are on the brink of total collapse, the chaos threatening to break out being a stark contrast to the pastel-hued interior of their beautiful house. 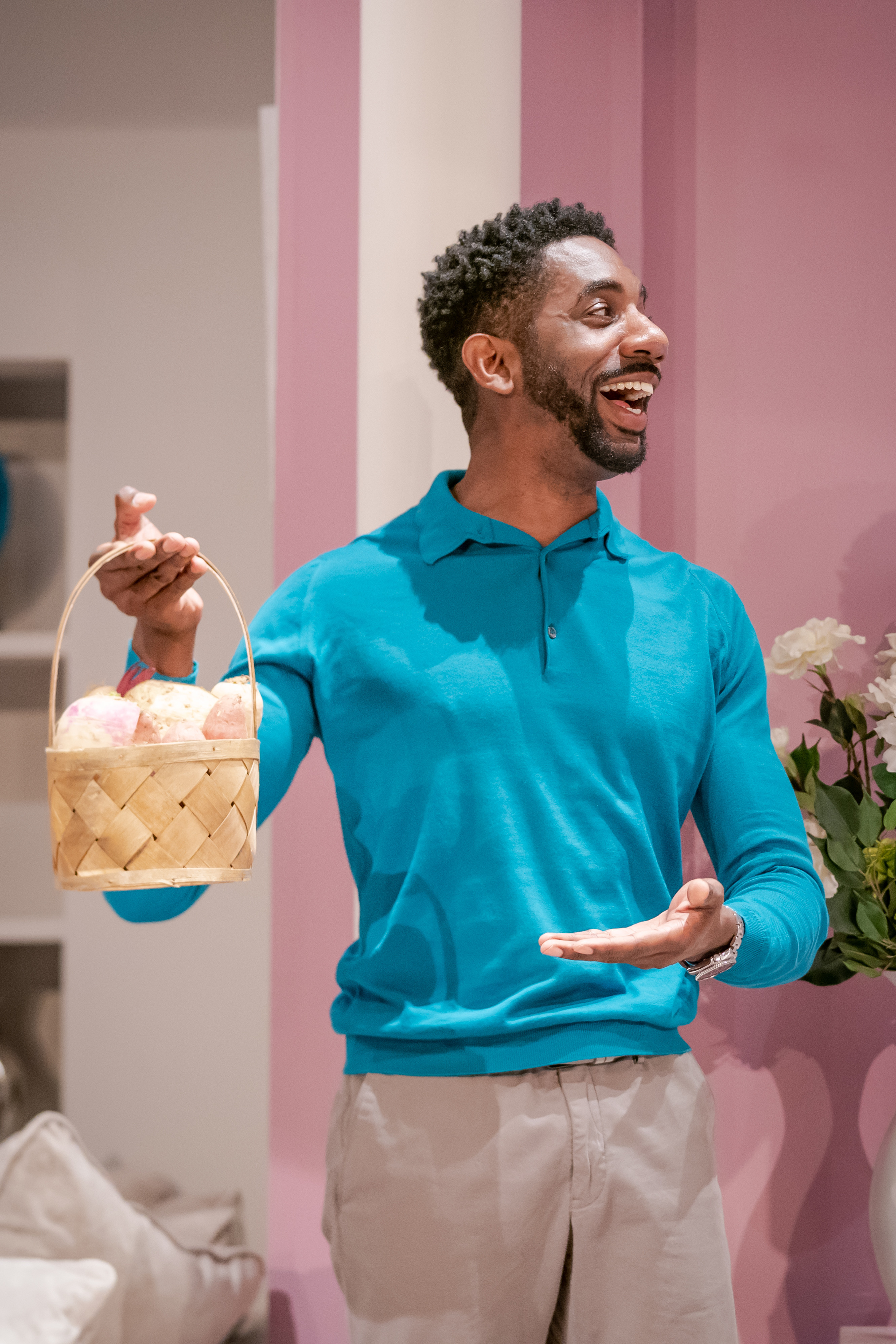 But what happens next is completely unexpected, as instead of the narrative moving forward, actors Esther Smith, Julie Dray, Matthew Needham and David Dawson come into the picture as audio playing over the speakers, white ‘audience’ members offering their own ‘live’ running commentary as the play restarts. The actors mouth the words, but all we hear is the commentators agreeing to disagree, arguing over race, the benefits and disadvantages, attempting to speak for them, and ultimately arriving at no conclusion. In playing these same scenes a second time, we gain the uncanny sense of déjà vu, not just within the play, but as if we’ve experienced all this in real life somewhere before, more often than we like to realise. 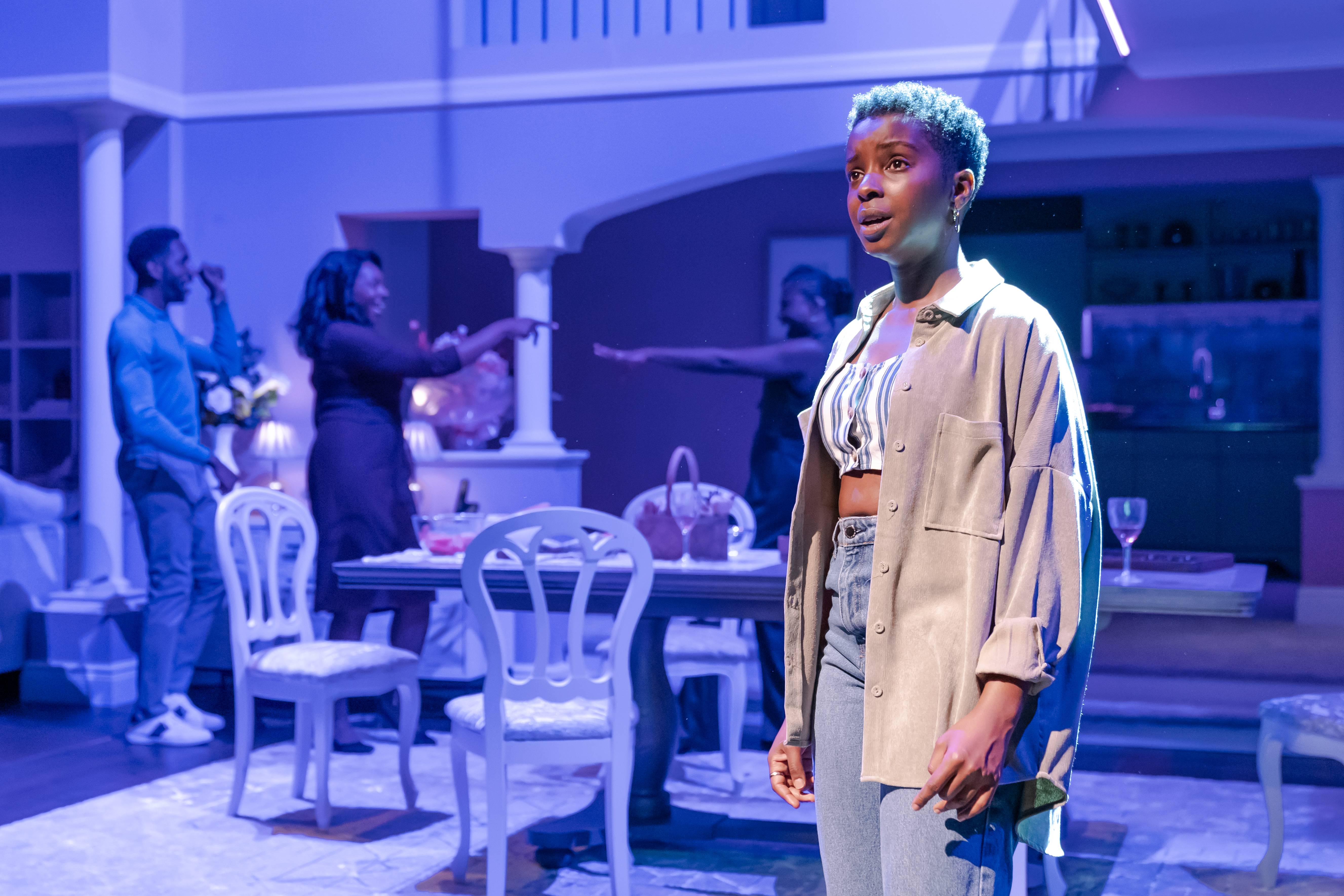 Fairview’s self-reflexive, meta-theatrical format is a sobering revelation at how everything we see is inevitably coloured by race, even when looking at a self-contained, seemingly ordinary drama about a family of a single race. It lays bare the assumptions and stereotypes we associate with such viewing, unable to blind ourselves to them and see things completely objectively. We are reminded to check our privilege and our own viewpoints, constantly questioning if we are fair in our assessment of affairs from our biased, limited points of views, leaving us uneasy in the knowledge that this is something we will never be able to completely erase. This is an uncomfortable play to watch and experience, something that will no doubt put its audience members in the hotseat and force them into questioning and rethinking our world views, and essential viewing for those looking for a hard and fast look at how race has shaped our lives. 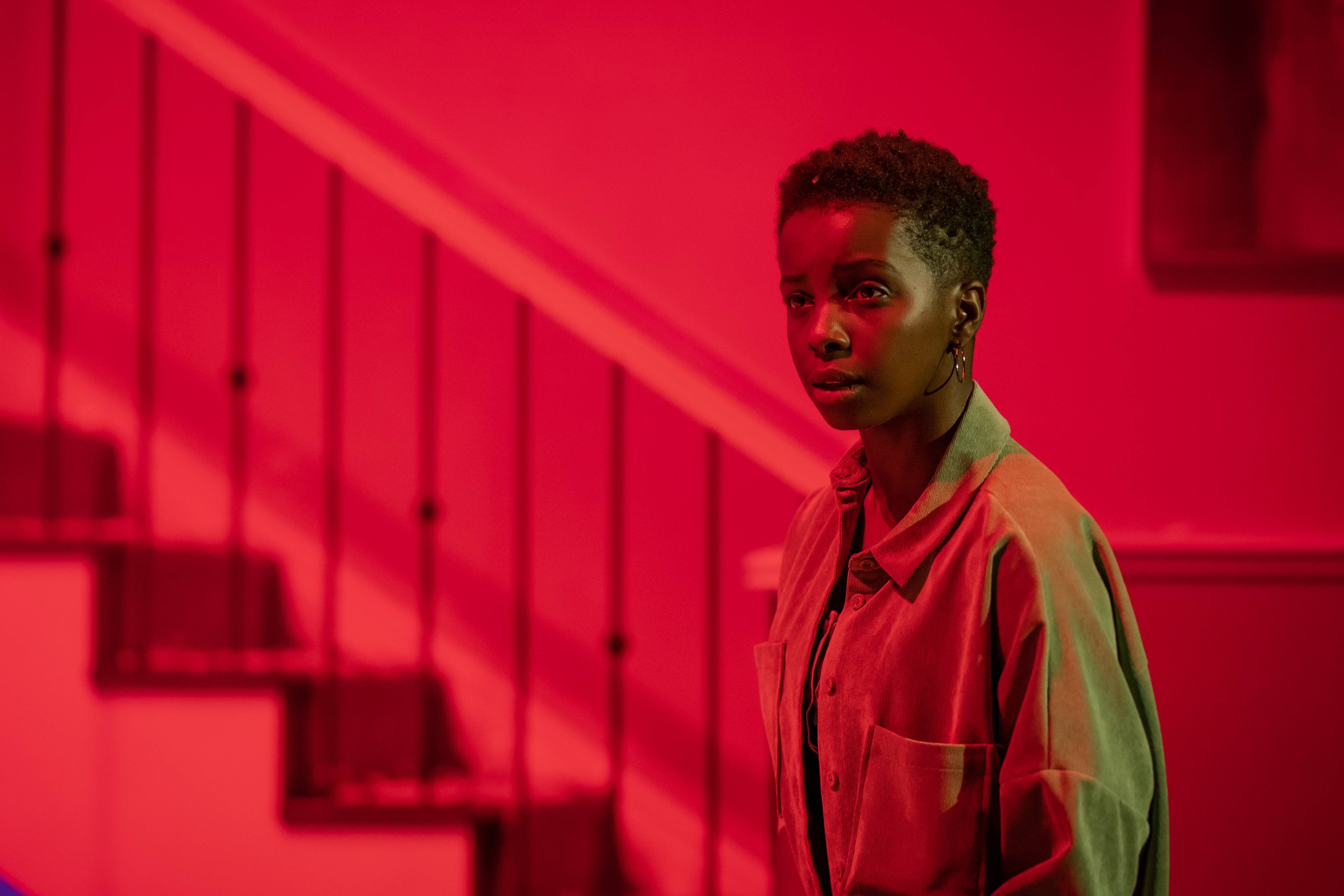