If there’s one industry that’s been hit hard during the pandemic, it’s the fashion industry. Unable to present live runways, faced with the difficulty of organising photoshoots with limited crew, and the drop in sales, the fashion industry has been learning just as much as anyone else how to adapt to the crisis. Over summer, we’ve seen countless fashion shows and launches being cancelled or indefinitely postponed, yet, these brands have continued to persevere, finding new ways to reach out to consumers online, spending time and effort innovating on how best to work their way around the limitations in the new normal.

Naturally, we miss the live events, and the socialising that comes with it. Not just because of the glitz and glamour, but because of the excitement of seeing a well-put together show, the sheer emotion that comes through in a collection on the runway, and to watch the designers brimming with pride at what they’ve created. At the same time, we wish that these were events that weren’t restricted to just the rich, but also accessible to the everyday people around us. The front row of a runway may seem like an unapproachable seat reserved only for the upper crust, but that shouldn’t be the case. In fact, everyone should be given a chance to experience it, instead of reinforcing the stereotype of fashion being seen as too ‘atas’ and unrelatable. 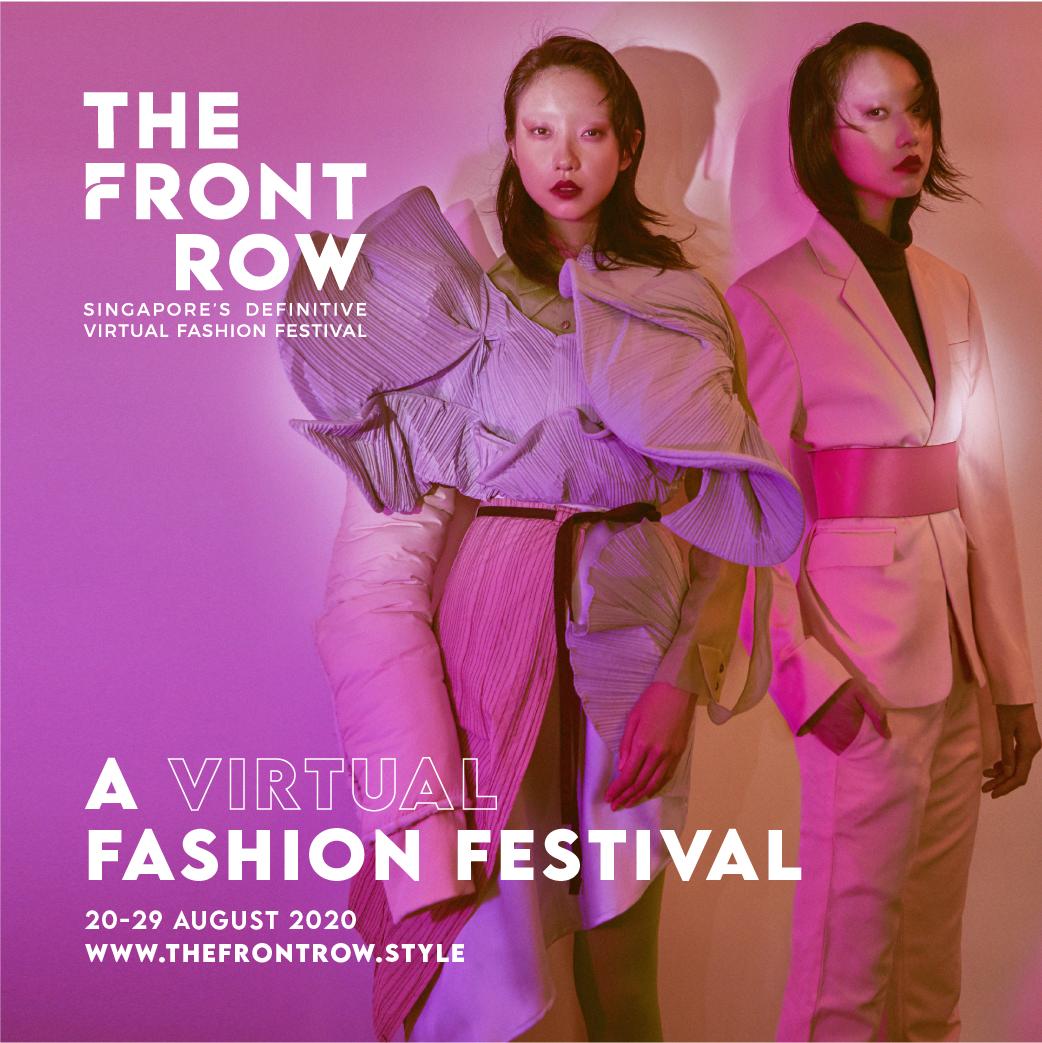 And that’s where The Front Row comes in, Singapore’s first ever online fashion event held in a 360-degree 3D environment. Supported by Enterprise Singapore and produced by Daniel Boey Creatives and AP media, the 10-day festival is fully conceptualised and produced by Singaporeans, and features 31 local and 10 regional labels showcasing their latest collections through virtual runway shows, fashion films and graphic animation. Visitors are encouraged to check out these programmes from the comfort of home, and enjoy the fabulous line-up of events prepared.

“The Front Row is a platform for us to come together to tell our stories, and a means for the participants to show solidarity with each other in this time of crisis,” says Daniel Boey, creative director behind The Front Row. “It’s a way to democratise fashion, not just to give designers a platform to showcase their work, but also to give power and accessibility to fashion to the consumer. Fashion isn’t always about the elites, and should not be about fanning each other’s egos. To that end, The Front Row aims to strip it down, keep it real and let people make their own choices.”

During the circuit breaker, Daniel began podcasting the show Creatively Unscripted With Daniel Boey, and brought on creatives, models and people he’s worked with as guests on each episode. When Daniel had Malaysian producer Adrian Chee as a guest on his podcast, the two decided that once the pandemic was over, they would produce a fashion show as a sign of solidarity. It was then that the idea for The Front Row was first conceived. Not only would it be between Singapore and Malaysia, but it would now see a collaborative effort that would also involve Australia, the Philippines, Thailand, and others from the region. Daniel then sought advice from his fellow creatives on how they could make this happen, with the vision for a digital event that would lift the fashion scene amidst the gloom of COVID-19, showcasing and highlighting the work done by members of the industry.

But as with all new initiatives, getting The Front Row off the ground was no easy feat, with no precedence and essentially, a project that was being conceptualised from scratch. “We had less than 2 months to create The Front Row, and the team really had to put our heads together to figure out how we would get everything put together in time,” says Daniel. “Thankfully, I looked back on my past theatre and film projects, and we knew how to work fast and do a good job of it, even with limited time and resources. But there was still the concern that even though we were all well-versed in the industry, how would we make an impact as a new show, get people to attend this event, and garner sales?”

The solution to that was Daniel and his team assembling some of Singapore and the region’s best and brightest brands to feature in The Front Row, showcasing the sheer diversity of talent and ideas that formed the fashion landscape. The Front Row’s job then, was to curate what would go out, and figure out the best way of highlighting each brand and label’s work. “We gathered and invited a wide range of brands, and wanted to arrange them in shows that would appeal to their target demographic, whether it was presentation via runway, fashion documentaries or short films,” says Daniel. “Above all, this was not going to be a normal fashion week.”

Look out for the likes of TRIA The Label, ITT Swim, MAX.TAN, IKV, Tube Gallery, Q Menswear and more showcasing their latest collections during the festival. Amongst the guests, look out for South Korean designer Minju Kim, who shot to stardom after winning the first season of Netflix’s Next In Fashion. Kim will be appearing in a live podcast, as she talks about how Asian labels can continue to stand out even within the pandemic. Other featured personalities include ‘Green is the New Black’ founder Stephanie Dickson, Malaysian Couturier Carven Ong, and Melbourne-based Singaporean designer Jude Ng. They will be discussing topics such as sustainability in fashion, fashion education in the age of COVID-19, and the digitisation of fashion. Daniel himself will be hosting these conversations and podcasts, as he chats with creatives, designers and models to give viewers a proper conclusion and understanding of the themes and ideas at the end of each day.

“To draw in guests, I knew the designers I picked had to be compelling, and that our presentations had to keep viewers engaged,” says Daniel, commenting on the programme lineup. “Think of each show like a fashion spread come to life, like how our swimwear show is a homage to ’80s electronic music. On Friday night, the ‘lux night’, we’re featuring brands such as TRIA The Label and Q Menswear, while on the weekends, which tend to be the strongest shopping days, we’ve got programmes running throughout the afternoon, with themes like ‘A Story In Print’ or ‘Shaken, Not Stirred’, all with the intent to bring shoppers together.”

“We want people watch these shows and be inspired,” he continues. “And what’s more, we’re making it convenient to purchase the pieces they see on the runway immediately after the show by simply clicking through to the 24/7 retail portal. What’s important is that at the end of the day, The Front Row provides a support system for the designers, to help increase awareness and understanding of these brands, boost sales, and benefit the scene.”

As a business, sales are obviously important in the world of fashion, but Daniel also believes that The Front Row is an opportunity to attract even those who simply wish to spectate, giving them a chance to take away something new and benefit in their own way. One example of this could be say, getting ideas about styling and accessorising they can apply in their daily life after watching the runway shows. “The Front Row is a platform for consumers to be entertained, to be educated, and a chance to listen to all these different points of view from our designers and guests,” he says.

“One thing you’ll see at The Front Row is how much inclusivity and range there is in our shows, such as how we’re featuring both classic models and younger, up-and-coming models,” he continues, something he and  Donna Chua did when they came together to produce a fashion show for Robinsons’ 160th anniversary in 2018, garnering overwhelmingly positive praise from both the public and industry members. “With The Front Row, we wanted to carry on this legacy with how we’re featuring even plus-sized models and classic models, not for the sake of diversity, but because they look good in the clothes they’re modelling.”

All events will take place across a first-of-its-kind virtual fashion village featuring some of our sunny island’s most iconic sights and landmarks, from Gardens by the Bay to the Straits Clan, to of course, the Merlion. Held across several zones, visitors to the event can explore The Runway Room, where they will experience the fashion shows; The Gallery, which features a photography exhibition by local fashion photographers Rui Liang and illustrator Gary Goh; The Coffeeshop, which offers guests a space to listen to live podcasts and panel discussions, as well as participate in workshops; and the Designer Hall, the aforementioned one-stop shopping portal for all your fashion needs.

In collaboration with Raffles City Shopping Centre, The Front Row will be offering a series of interactive workshops touching on themes such as Virtual Fashion Essentials and Fashions For Fall. Sustainability and eco-friendliness will also feature strongly, with The Kang conducting a sustainability fashion workshop, where guests can learn how he creates his signature ‘reptile skin’ accessories by upcycling everyday materials like plastic bags, while ethically-conscious brands such as OliveAnkara and Maisha Concept will also be featured as part of the lineup.

As a dog lover, Daniel also involved his own fur-kid Leia and other canine models as part of the line-up, having them dressed up in Binary Style, OliveAnkara, Maisha Concept and IKV. Thailand’s show will also be featuring two dogs, so be sure to look out for them. “We’re featuring four Singapore Special street dogs who were rescued from the back alleys, each with their own story to tell,” he adds. “Dogs aren’t just props; they’re models in their own right.”

If anything, The Front Row is here to show that even in these tumultuous times, fashion is here to stay, and ready to make a statement. It remains strong despite the challenges, and paves the way forward with a vision that will put Asian designers at the forefront while closing the distance between consumer and label, a simultaneous celebration of creativity, possibilities and joys that fashion brings. 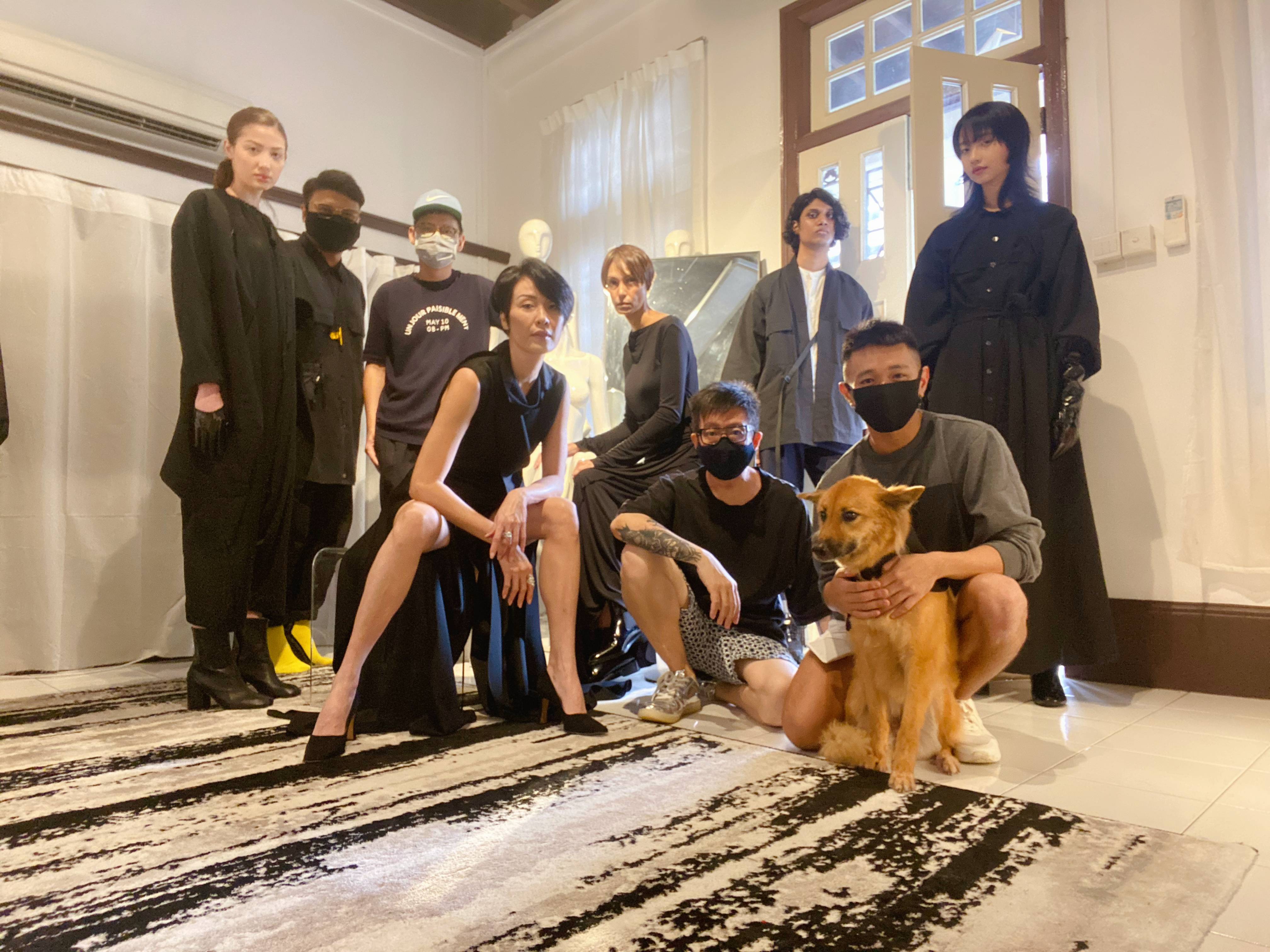 “The best ideas are developed under the harshest and most difficult circumstances,” Daniel concludes. “It’s a steep learning curve, but my team has managed to pull through, newly armed with more experience and the ability to organise a digital fashion festival. Ultimately, The Front Row for us, is an immediate solution is to help the industry tide through these difficult times. To collaborate, strengthen friendship, build the community, and bring fashion forward to the front row.”

0 comments on “Fashion Forward: Up close and personal at The Front Row”