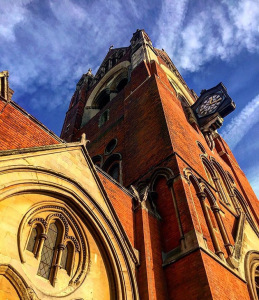 I’ll be honest here: I haven’t been keeping up with Night Vale after listening to the first 40 or so episodes. So I know the basic gist of the show and major developments (all the way up to Desert Bluffs and the major developments in Carlos and Cecil’s relationship), but already forgot most of the details.

So you would understand why it was with some trepidation that I stepped up to the (very perfect location) Union Chapel before the show afraid that it would be heavily reliant on the fanbase’s rabid knowledge of the show, up to date. Already I was beginning to worry when I showed up in a black hoodie and jeans, my usual attire as compared to the throngs of purple haired, purple socked fans decked out in official merchandise. The best costume of the night was probably a guy dressed up as the Glow Cloud, swathed in cottony material, with lights pulsating eerily from underneath.

For the uninitiated, Night Vale exploded onto the internet via Tumblr (as all good things do, alongside awful memes). It’s a podcast set in the fictitious American town of Night Vale, where strange things happen every day and no one bats an eye. The podcast is narrated by community radio DJ Cecil (Cecil Baldwin), who talks about the town’s happenings, such as mayoral elections, varsity, traffic, and the weather. There’s a twist though – Night Vale has floating cats, four headed dragons, hypnotic glow clouds and a whole cast of other supernatural characters. It’s simultaneously laugh out loud and scary as hell, and above all, extremely smart.

It’s hard to imagine a podcast doing better on stage than on the airwaves, after all, the soundwaves were its original medium of choice. And yet, Night Vale surprised me yet again, and put all my fears mentioned above to rest. Audience members needed only a minimal amount of knowledge about the show to truly enjoy it – i.e. The brief summary I gave above, and with a few tidbits in between for the more hardcore fans. 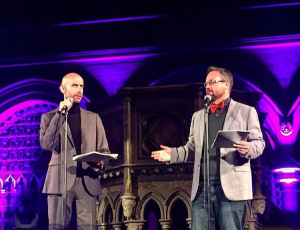 The show opened with opening act Jason Webley (who later on appears as a guest on the show), showcasing a very different kind of music, what with his foot stomping and mad vocals. Webley joked that the audience could voice their displeasure that this was not what they paid for (Said Webley: “You can yell ‘This is an outrage!’”) and started off the night on the right note. The plot of this year’s tour follows the discovery of a murderer in the midst of Night Vale, and the government has decided to solve it by putting all citizens into the rec center for a murder mystery dinner theatre, save for Cecil, who has an alibi by being in the radio booth at the time of the murders. Along the way, guests tunnel in, appear mysteriously and die offscreen (technically speaking), and involves minimal, completely voluntary audience participation, making for a very fun night.

I won’t spoil too much of the show for you, but suffice to say, Night Vale Live exceeded all my expectations, and truly showed what a live performance can do to improve a show. It’s that human contact that makes all the difference, and an absolute joy to see the faces of the actors one is so used to just hearing, making meta-jokes and with priceless expressions (so much love for Cecil Baldwin). If Night Vale’s in town, do yourself a favour and get a ticket. Just be prepared to queue early for front row seats, and an unforgettable experience.