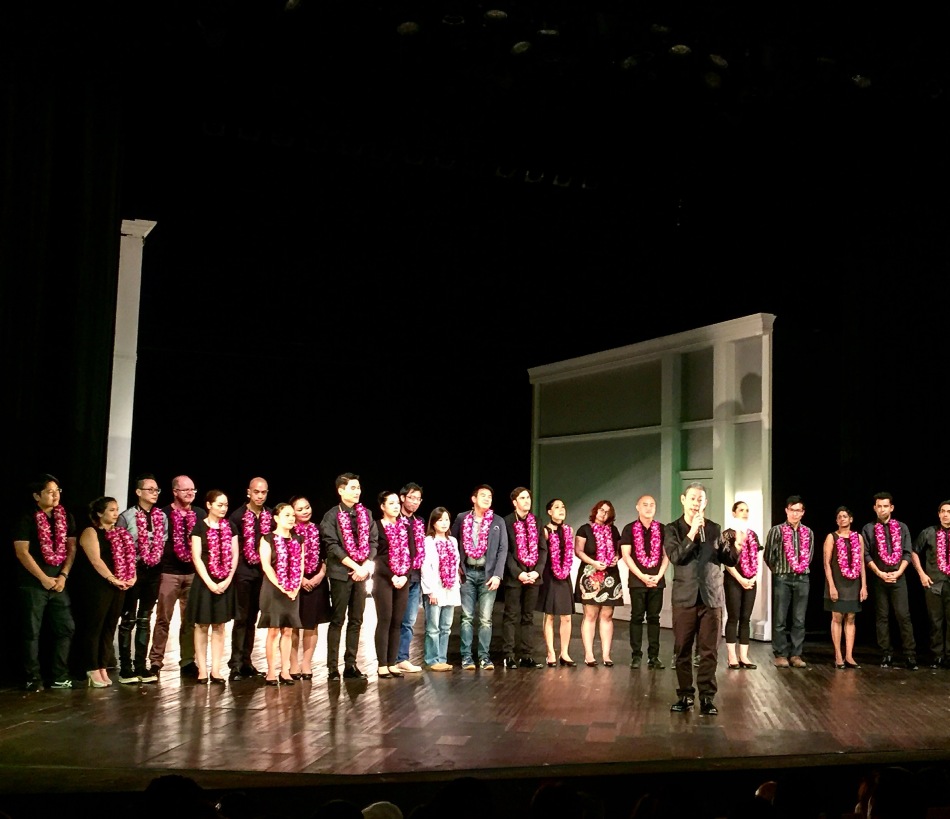 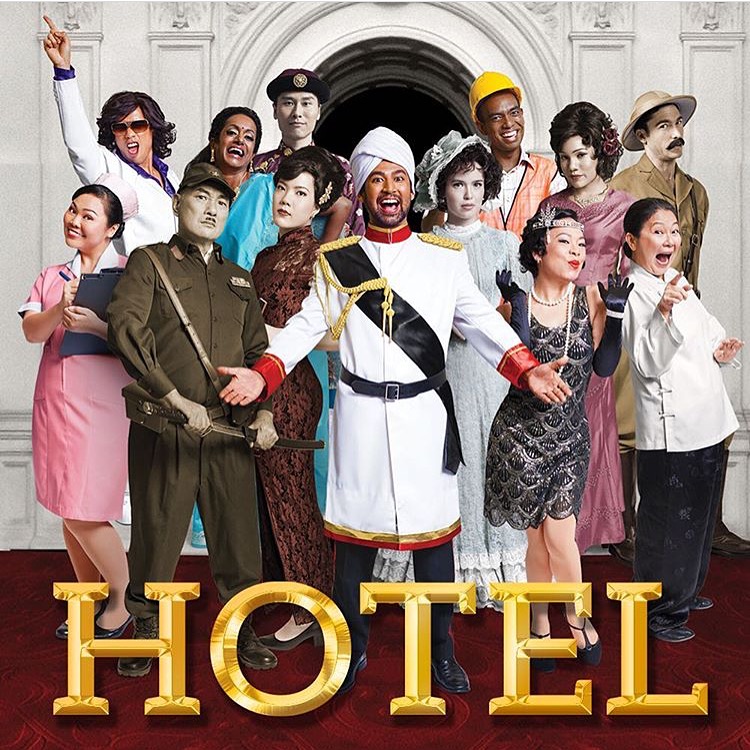 Hotels are strange places. They’re transitory, temporal spaces for people to live, many of which happen to be foreigners in a new country. People come and go, and leave traces of the past behind the same rooms that get cleaned up each day, in an almost spectral manner. Each room contains a rich history.

W!ld Rice’s epic Hotel traces the hundred year history of a grand unnamed hotel in Singapore playing host to a smorgasbord of guests. Hotel presents 11 sketches spanning 1915-2015, over 10 year gaps. Along the way, guests of all backgrounds occupy a single suite, revealing stories that are at times funny, and others deeply resonant with the present. The room changes as the years go by, from its wallpaper (projected onto a screen), to its purposes and inhabitants. It’s one heck of a journey, and you’d be surprised just how much drama, humour and madness can take place in one hotel room. 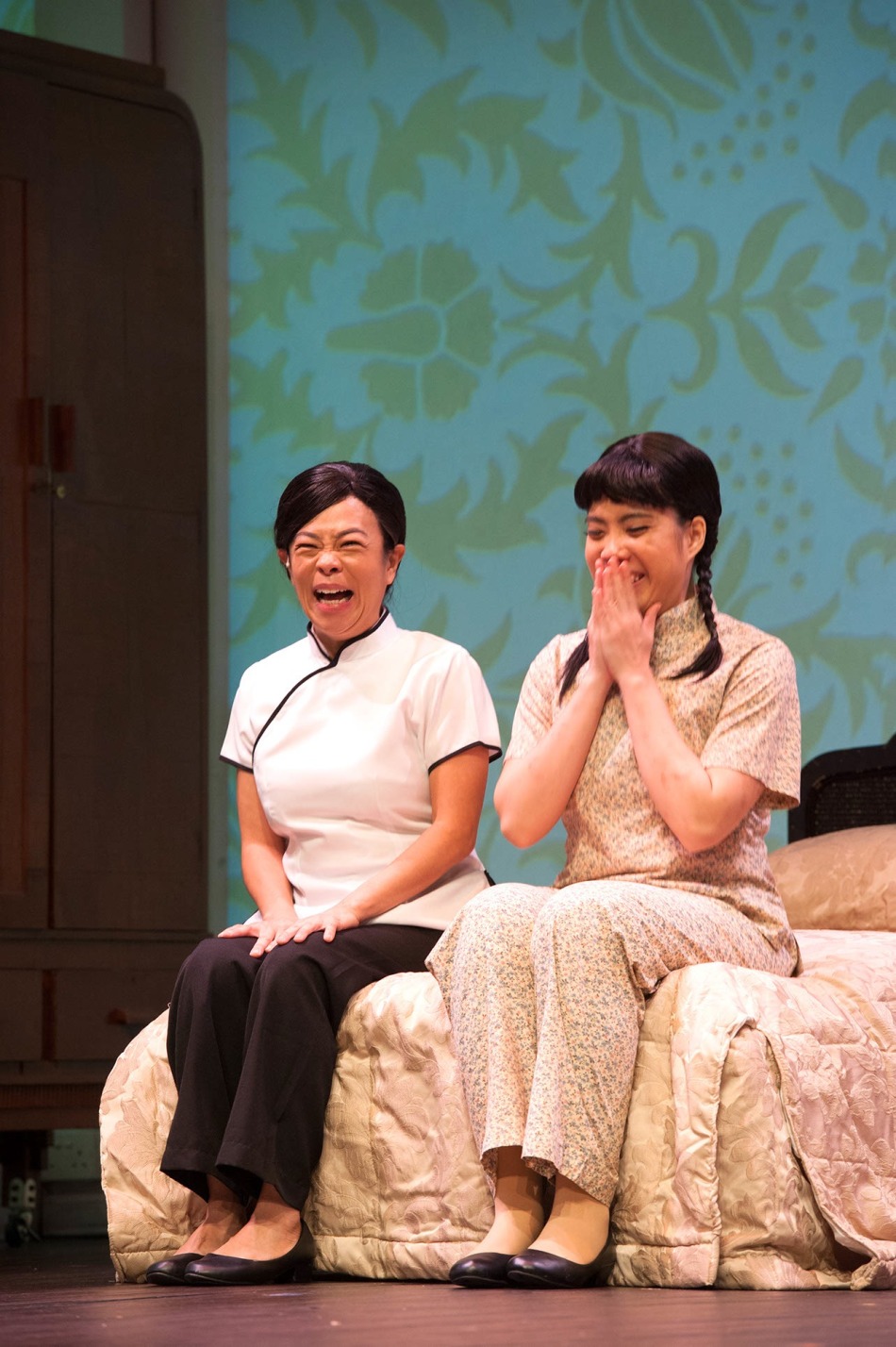 Hotel is an important play for a number of reasons. Firstly, Hotel is in many ways a magical, perennial and timeless piece, at once relevant and nostalgic, and more importantly, brings our own history to the fore. In the scene from 1965, Pam Oei and Brendon Fernandez play a hotel manager and technician who engage in occasional sexual trysts, and their relationship parallels the separation of Singapore from Malaya. The hotel staff also shed light on how nerve wracking the separation must have been for citizens at the time, giving what is usually just another event in our social studies textbooks an immediacy and emotional slant. In other scenes in the first half, a Sepoy rebellion alludes to the 2013 Little India riots, and a maid reveals that she is abused by her employer, both issues that seem to be a part of history, but in reality, are really just as relevant today as they were then. As the saying goes, “the more things change, the more they stay the same”, and Hotel riffs on that saying very much, with race issues being particularly pertinent throughout the play, whether it’s the resistance P Ramlee(Ghafir Akbar) meets with when he dreams of directing a Malay film with a Malay cast, or an Eurasian transvestite (Brendon Fernandez) who compares their ‘chap cheng’ gender with their rojak ancestry, questioning why a person should be boxed into specific categories when they meet Lee Kuan Yew himself (played by Ivan Heng) in a drug addled dream. These are insightful, thought-provoking observations that were well presented onstage.

In that same vein, Hotel’s epic length allows for it to set up characters and events early on that have a profound impact in the years that follow. There are In 1945, Sharda Harrison plays a Malay comfort woman saved by a Japanese soldier, and what follows is an intensely emotional breakup sequence. It’s also worth noting that Harrison speaks both Malay and Japanese in this scene, which impressed this reviewer to no end. 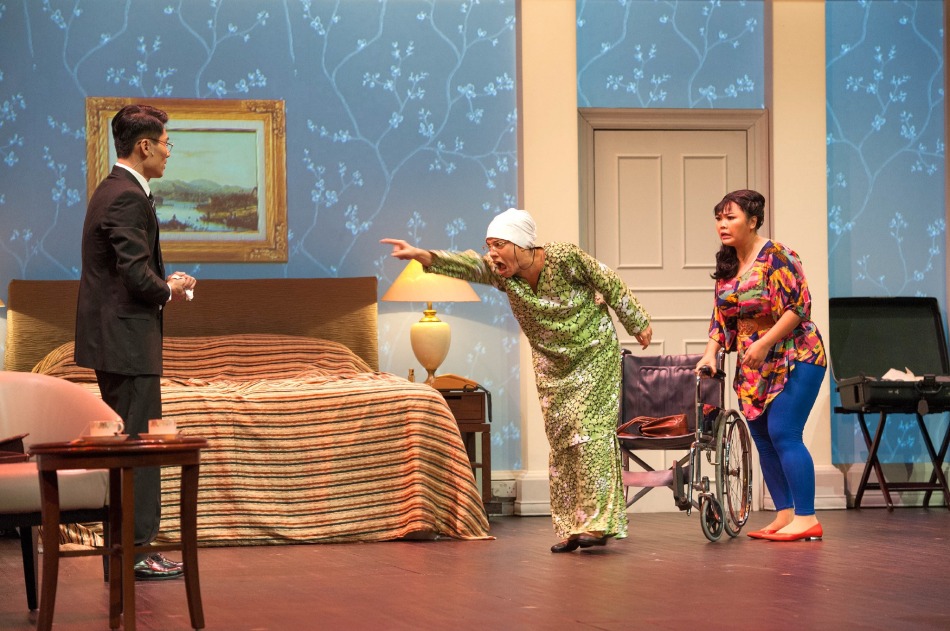 The true emotional payoff however, comes in 1985, when she plays an older version of the same character, and a strained reunion ends up breaking hearts across the theatre. Harrison could practically give Neo Swee Lin, master of sad grandmother characters, a run for her money. 2005’s scene features a woman (Siti K) visiting Singapore after last having worked with P Ramlee in 1955, and appears cheery at first, but quickly delves into a matter of terrorism and paranoia.

Hotel is full of huge moments that draw links between the past and present, from minor characters that make a reappearance later on, to family heirlooms that make you marvel at just how much attention to detail was put into this play. It’s all these little details that formulate Hotel’s rich history and make the audience feel like they’re a part of something much bigger, and allows itself to unfold

Finally, Hotel is quite simply a brilliant piece of theatre that showcases the absolute best that our local thespians have to offer. Alfian Sa’at and Marcia Vanderstraaten’s script is fast paced, witty, and hits hard, not to mention challenges the cast linguistically and dramatically, and it’s amazing just how many scenes pay homage to big productions, such as a seance in 1935 referencing Noel Coward’s Blithe Spirit, or 1975 being highly reminiscent of Sa’at’s version of Strindberg’s Dreamplay. Yet, these scenes are not parodies of these established productions, and it’s not necessary to know of or have watched them to fully appreciate the scenes. Rather, each scene is only framed and inspired by these plays, but on their own strength and characters, drawing out deeply affecting issues that resonate with many Singaporeans alive in 2016. Whether it’s an interracial wedding or irreverent musical, the sheer number of genres, issues and languages tackled in Hotel are testament to just how rich our local history is, and the effectiveness of the theatre medium and the capable cast of thirteen to tackle it.

Directors Ivan Heng and Glen Goei have done a spectacular job easing the actors into their role, and every line feels diegetically natural, despite the audience knowing that it’s very much scripted. The script itself was refined slightly since last year’s edition, and with more time to rehearse and more shows, the cast had more time to get into their characters and really feel their roles.

It’s easy to see how Hotel swept the Life! Theatre Awards last year. There are few theatre companies that attempt to tell a country’s entire history and succeed at being simultaneously accurate, entertaining and emotional gripping. W!ld Rice has always pushed political and artistic boundaries, but Hotel is almost certainly one of the absolute best they’ve produced so far. If anyone’s looking for a quintessential Singaporean play, it’s this, and kudos to the entire team for creating a work that will remain in audience members’ minds for years to come.

Hotel is part of W!ld Rice’s Singapore Theatre Festival and plays over two parts at the Singapore Airlines Theatre, LaSalle College of the Arts at 1 McNally Street until 24 July. Tickets available from SISTIC