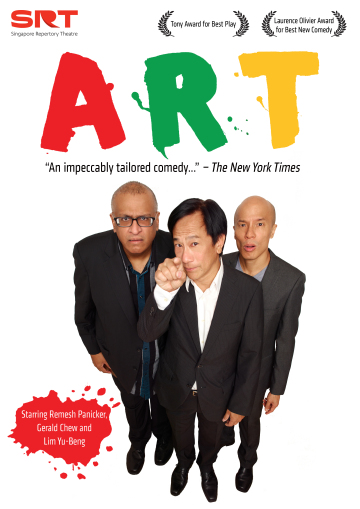 Have you ever been to an art gallery and questioned your presence there? Or looked at a painting and wondered why people call it art? Ever wondered how such a seemingly “basic” piece can reach such a significant amount of money? Then SRT’s ART is for you.

We took a while to navigate the National Gallery but eventually managed to find the performance space (apparently my art appreciation skills are much better than reading the seemingly complicated gallery maps and tickets. Tip: Simply take the elevator from the City Hall Wing to Level 3 and you are there). Before the performance, we were reminded that there would be no re-entry and that the performance would be a full 90 minutes with no intermission – so use the bathrooms first ladies and gentlemen! 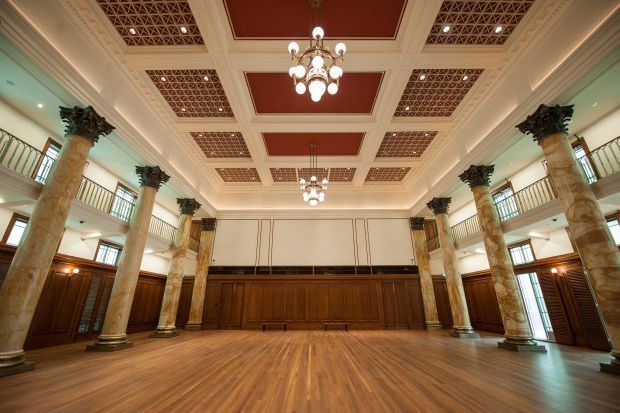 I’ve visited the gallery a few times before, but never to the City Hall Chamber, which is of great historical significance, being the place that Mr Lee Kuan Yew was sworn in as Singapore’s first Prime Minister on Jun 5, 1959. It’s a grand room that was transformed into an intimate theatre for this play.

Once the doors to the full house were opened, we were ushered through and greeted by a simple stage with a living room scene set up, providing the setting for the entire play. 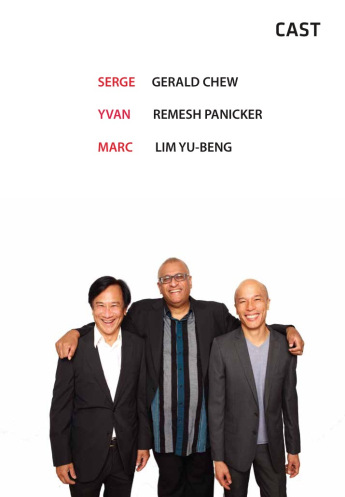 It was great to see three veteran actors performing on stage together. The cast: Gerald Chew, who plays Serge, has appeared in many local and international TV series, including Netflix’s Marco Polo, and of course SRT’s very own Shakespeare in the Park (Othello and Merchant of Venice). Lim Yu-Beng, who plays Marc, won Best Actor in 2005 for the Lover and The Dumb Waiter and is known for his work in Singapore television, including Do Not Disturb and 9 Lives as well as local films such as Singapore Dreaming. Remesh Panicker, who plays Yvan, has over 40 years acting experience, and has played the same role twice before. He has been nominated 5 times for ST Life! Theatre Awards, winning 1 award for Best Actor and 2 for Best Supporting Actor. He was last see on screen on MediaCorp 5 TV drama series The Hush.

Before the play even started, the scene was set by the housekeeping and sponsors announcement to the audience, cleverly written and read out as a poem, which had us laughing and smiling before the show even began.

The play starts with Serge showing Marc his new (purchased) painting. The first few moments consist only of silence and the actors’ facial expressions, the latter of which spoke louder than any words could – from the outset, it is clear that the cast is experienced, and they have great onstage chemistry. Serge and Marc clearly have different opinions on Serge’s purchase, and when the tension between the two men rises, the characters launch into their own internal monologues to show what each of the men is thinking beneath the surface. The monologues highlighted how what we say and do is not always what we mean, something we can all relate to, and also act as a lovely reminder to the audience of the sometimes fragile nature of friendships and add comic value to the play, making the audience feel involved in a “we know what you are really thinking” way.

Yvan is introduced later and is a character the audience immediately falls for; 6 years in therapy, a simple, loveable man with a low income, and a heart of gold; a stark contrast to his two friends, who clearly do well for themselves and appear to “have it all” Remesh plays the role of Yvan well and is a character I wanted to root for and support.

I personally felt the “argument” returning back to the painting over and over again might have been a bit overdone, especially hearing the almost audible groans from the audience when it was brought up again and again. Yet, this is reality – a real life example of how something so petty can affect our entire relationship and friendship we have with our loved ones. I also wonder how, if at all the translation from French has affected the content of the script.

Overall though, I enjoyed the show and thought the simple set used a clever combination of lighting and short sound clips to effectively transition between scenes and the script left me laughing out loud and silent in contemplation in all the right places. 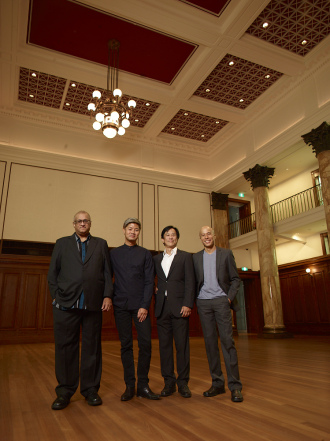 ART is a great production to not only get you talking about art, but also about the value we put on our relationships. Laugh and all will be well.

ART plays at the National Gallery until 30th September. Tickets available from SISTIC

This piece is written by Anthony for Bakchormeeboy.