Labels, UK-based Worklight Theatre’s multi-award winning show, made its Asian debut as one of the festival highlights of this year’s M1 Singapore Fringe Festival. Written and performed by Worklight co-founder Joe Sellman-Leava, this one-man autobiographical show presents a funny and touching look at Sellman-Leava’s childhood growing up in 90s rural England against the radically shifting political landscapes of Britain today.  Using the overarching theme of labels, the play explores the way we view racial otherness, inflamed by the growing trend of “political incorrectness”, and the thin line between the labels assigned out of curiosity and those assigned out of hatred.

Labels is also Sellman-Leava’s love letter to his family, tracing its stories from his father, a Ugandan-born Indian who fled to Britain upon facing racial persecution under Idi Amin, to his mother, a British woman navigating racism as part of a mixed-race couple. In a particularly heartbreaking segment, Sellman-Leava explained his family’s surname change, from the Indian “Patel” to the distinctively more European sounding “Sellman-Leava”, after his father overhears recruiters mocking his surname at a job interview. As a man constantly forced to adapt and compromise his dreams, his father’s response to this painful erasure of his identity and history is hopeful- he suggests that they should take pride that the “Sellman-Leava” label belongs only to their family, and that new memories and histories can be created in association with this label.

Sellman-Leava goes on to detail his own experiences with racism- slurs used by oblivious family friends growing up, innocuous “but where are you really from?” questions during his university orientation, and even racist Tinder dates (hilariously retold with the help of an audience member assuming the character of his Tinder match). These stories are juxtaposed against soundbites and statistics from the London Riots and the current refugee crisis, conveyed through Sellman-Leava’s gleeful impersonations of former party leaders David Cameron, Ed Milliband and Nigel Farage, TV personality Katie Hopkins (who infamously once compared migrants to cockroaches), among others. He later compares these comments (through more impersonations) to speeches made by Ugandan Dictator Idi Amin and US President-elect Donald Trump. At the play’s moving climax, to a soundtrack of breaking waves, Sellman-Leava flings a handful of literal labels into the air, each with a statistic written on them, and implores for the audience to remember that each number, each body bag pulled from the Mediterranean is a human being with their own stories. 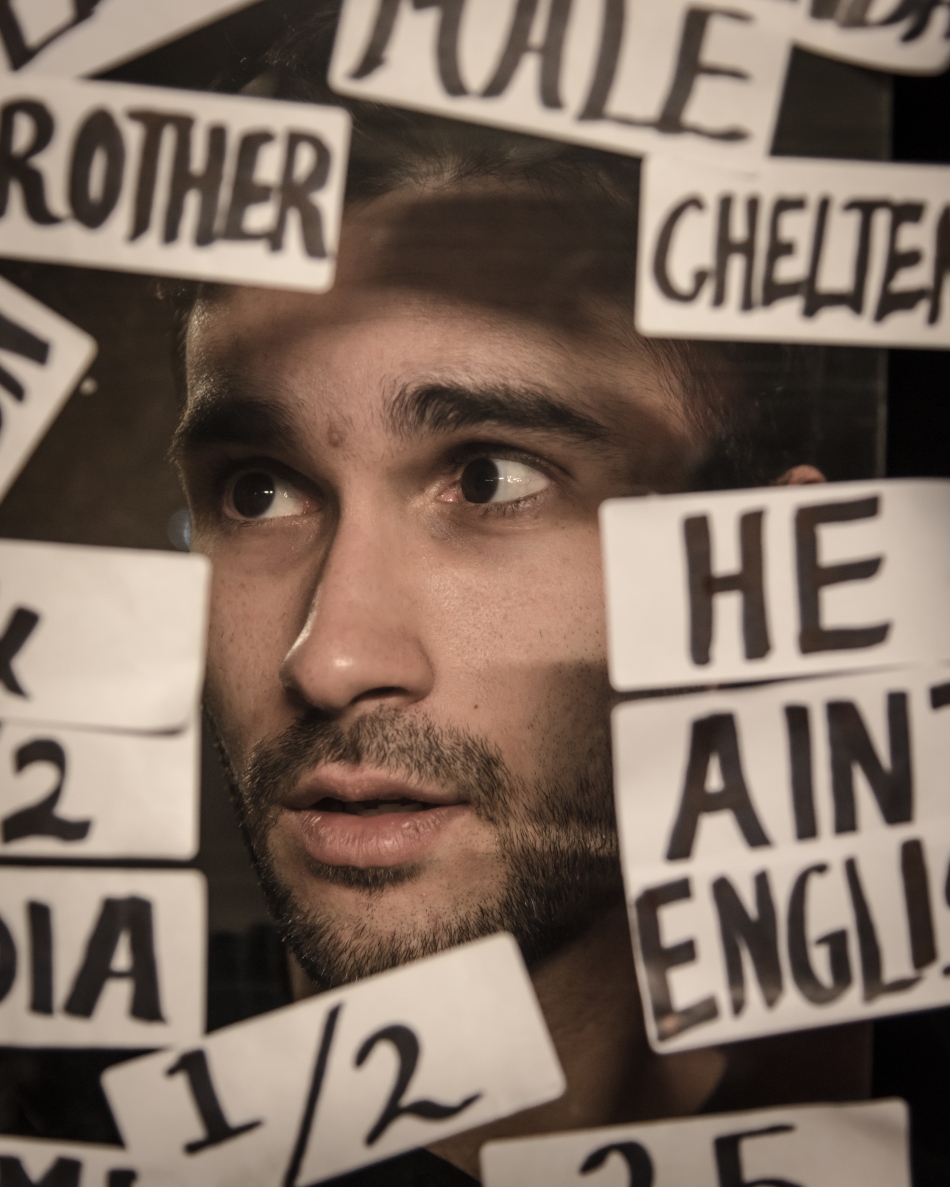 With just its cast of one, minimal sets and props consisting some truly quirky devices, Labels is a wonderful example of fringe theatre done right. Sellman-Leava is likable and charismatic, and is more than capable of helming the 1-hour production. The continued use of stickered labels, first to plaster himself with his various identities (ascribed both by him and by others), is a clever and powerful gimmick and when later used as a metaphor for the migrant-crisis refugees, makes for one of the strongest images from the whole play. While the play’s effectiveness is hindered slightly by cultural barriers between the British theatre company and the mostly Singaporean audience (a healthy understanding of the 2015 UK General Elections and British pop-culture definitely helps for this), the overall themes of racism and immigration remain crucially and painfully relevant, especially in modern-day Singapore. Alternately thought provoking and side-splittingly hilarious, Labels is, at its heart, a beautiful human story and an absolute must-watch.

By Sim Xin Yi for Bakchormeeboy.com