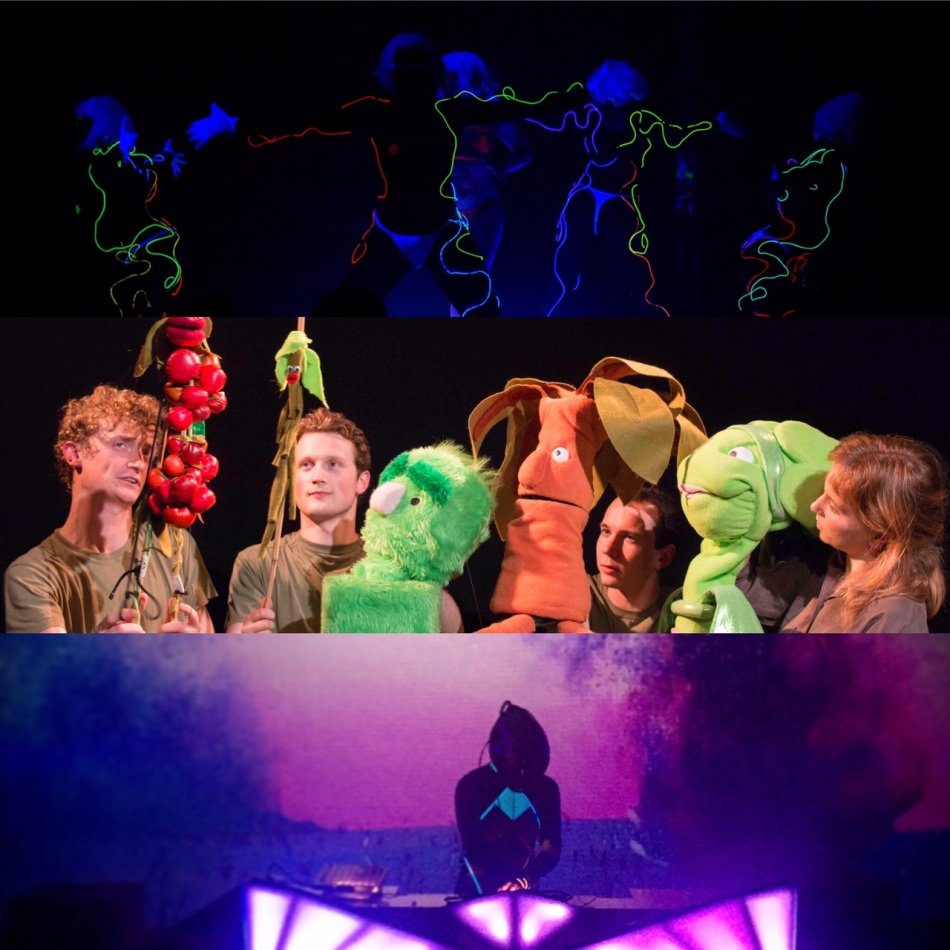 In the second half of our reviews for the VAULT Festival this week, we check out some non-traditional performances with the clever, sultry House of Burlesque led by Tempest Rose, irreverent adult puppet humour in Cicada Studios’ Blood & Bone, and a Daft Punk-style visual music experience from Sartory with her performance of ANDRODES. 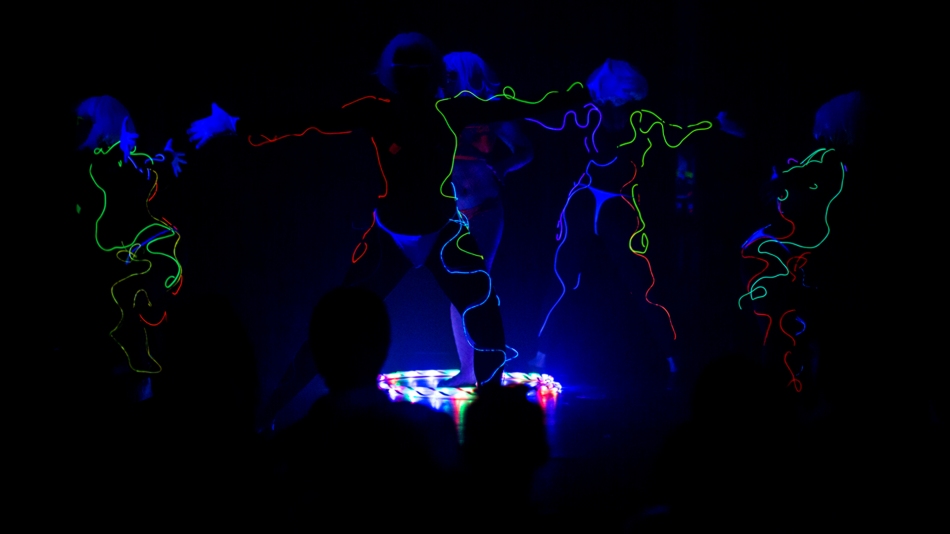 As these ladies would have you know. burlesque combines a milieu of performance forms from acrobatics, gymnastics, dance, comedy and clowning, and the people who perform burlesque are anything but strippers. They’re artists, and House of Burlesque 2.0 is all the proof you need that it’s one of the most exciting mediums alive.

Led by international performer Tempest Rose, this troupe of girls has talent in spades and their revue is one of the most exciting, creative expressions I’ve seen in a while, and even comes with a side of politics. Tempest Rose herself is something of an expert, performing the most numbers throughout the show, from a number set to Selena Gomez’s Hands To Myself while clad in a lacy, skintight suit while interacting with projector displays, to a surprisingly sexy reverse-strip routine, in which she struggles to put on a tight pair of jeans. Rose has essentially mastered the art of play, in every sense of the word. It’s clear that she’s having a ball out on stage, while she’s in full control of how much pleasure she wants to dish out to the audience (answer: a lot).

It’s hard to leave out any of the other performers from the review. All of them are extremely well rehearsed and choreographed, their movements sharp and precise, their costumes indicative of their intent to dress (or undress) to kill. Each one’s gimmick is unique and interesting enough to warrant a mention here – Bettsie Bon Bon’s seductive Purple Rain act, a routine that involved several of the girls clad in glow in the dark lipstick, wigs and suits, and a very invigorating hula hoop act, a tearaway newspaper dress act, a bedazzled skeleton lamenting the intrusive nature of adverts, Debbie Noire showcasing her feats of flexibility while dressed only in a skirt of bananas and very little else (offering an interesting potential phallic symbol analysis)…the list goes on. Bonnie Knockers even went so far as to base her act around an extended period joke, refraining from using her teeth to pull off her bloodied gloves, and managing to insert a political slant about the universally hated ‘tampon tax’ in the UK.

Time really flew by with the nonstop entertainment these girls were giving. By the time we reached the explosive final act, with the girls clad in military attire and armed with batons, the theatre was on the edge of their seat with awe and yells, bowled over by the hour of wonder. The women of House of Burlesque are skilled professionals and aren’t afraid to leave a lasting impression, whether it’s from their outrageous acts or the sly smile they leave behind before exiting. I have a newfound respect and discovery for the art of burlesque watching these confident, capable women perform, and if you want to know where all the burlesque talent is, well, you’ll find a ton of it right here.

I like puppets. Growing up with shows like Sesame Street and Bear In The Big Blue House has endeared them to a special place in my heart. So it comes as no surprise that I loved the irreverent humour of Blood & Bone and their willingness to completely annihilate the sacred position puppets hold on my childhood.

Blood & Bone is framed as a story within a story. Opening with the Wallace and Gromit theme song, we’re transported to a pub where three strange characters, including a talking daffodil and a lusty patio chair meet and tell a story of a young fern named Ash (played by Liam Steward George) who attempts to escape the greenhouse to seek out the flower who deflowered him, and finds himself constantly at risk of facing certain doom.

Bringing to mind recent ‘adult’ themed puppet shows like Hand to God and Don’t Hug Me I’m Scared, Blood & Bone plays out like a warped version of Alice in Wonderland, with a memorable cast of foul-mouthed and depraved characters, from coprophilic, gimp-masked fungi (or ‘fun guys’) to even newly inaugurated President Donald Stump of the United Gardens. Cicada Studios’ script never takes itself too seriously, and works this to their advantage by taking each moment to extremes, delivering over the top performances and caricatures only possible when you’re puppeteering talking vegetation, designs courtesy of Oliver Smart.

Of the cast, Tea Poldevaart tends to get the juiciest of lines, whether it’s as the cantankerous war veteran shovel or the sultry, Hispanic, ‘big budded’ rose. Poldevaart shines brightest when he’s playing accents, king during the extended sex scene between his rose character and Ash, which almost certainly counts as a form of puppet pornography. Despite the crass nature, there’s something fascinating about the way Rebecca Blake’s direction manages to weave in concepts of transcending the boundaries between puppet and puppeteer in the scene’s post-coital comedown even after a somewhat distressing and wet climax scene, where Ash’s erect root continually brushes against pupeteer Liam Steward George’s face, much to his annoyance. That’s certainly not to say that the other actors don’t mine their characters for laughs either, and Miles Sloman and Ella Cook’s peripheral characters manage to deliver exaggerated, larger than life performances to great comical effect. Whether it’s a pseudo music video set to Celine Dion’s All By Myself or getting high on ‘fertilizer’, our unusual protagonists’ surreal antics and plant puns brought the house down, and the humour works precisely because each puppet completely indulges in their own instinctive id, while oddly enough, references real world problems and people.

At the heart of it all, Blood & Bone is a story about growing up and coming of age, along with the perils that come with it. There’s something devilishly delightful in watching what should be an innocent, moralistic story come asunder with its completely inappropriate content, subverting the puppet genre, and I found myself laughing even when the script leaned in and plucked the low hanging fruit, marveling at how transfixed my eyes were on the deft puppet play. Leave all your manners at home or prepare to be shocked if you’re coming to see Blood & Bone, and allow yourself to become a part of this agricultural society – you won’t regret it one bit. Just take care not to soil yourself laughing.

Blood & Bone plays at the Studio (The Vaults) till 19 Feb. Tickets available here. You can keep up with Cicada Studios on their website and follow them on Twitter @Cicada_Studios

Stepping into the Cavern, we’re greeted by a truly futuristic scene: a slim, android like figure clad in a silvery skintight suit, complete with a helmet with a digital display. This is Sartory, our host and DJ for the night, and she’s assisted with a gigantic machine that flashes with tiny LED lights and multi-hued panels. This is her instrument and soundboard, which Sartory manipulates as if it were an extension of her own body, fluidly tapping buttons and touching dials while wielding lighted drumsticks she strikes, as the entire machine flares to life in time with her music.

Channeling similar visual artists such as Daft Punk, especially from their Tron: Legacy era as well as the visual medium of bands like Kraftwerk, Sartory stands in front of a giant screen that spans the height of the ceiling and the width of the floor, playing a video projection of an odyssey-like journey to a digital world inhabited by robots. Size is key here, and the screen keeps audience members hypnotised and their eyes glued to the spectacular visuals playing out before them in time to the loud, catchy beats from the speakers surrounding them. Sartory is by no means dwarfed by the mass of information from all fronts though, and manages to remain our focal point as all the elements come together to form a mesmerising, orchestral one-android set.

The story loosely follows the life of Ani, a robot that has gained sentience and undergoes a test before being rebooted, and Sartory’s music and visuals heavily reference Japan’s obsession with technology, even inserting a conversation between Ani and its ‘creator’ in Japanese into her songs. There’s little time for applause in between as each song segues into the next, much like being in an actual club and being faced with a constant sensory overload from all fronts. It’s a lot to take in, but in being so vast and epic, it easily creates a sci-fi world around the audience, making the immersion into it that much easier by literally surrounding them in everything that makes it up.

A pity Sartory hasn’t uploaded individual tracks onto her Soundcloud or other music hosting sites, because these are some sick beats and would do well to make the circuit around the London or even international club scene, where I imagine more familiarity with the tunes might make attendees even more excited when their favourite tracks come up, like a full blown concert. Androdes is the kind of show that would go over particularly well in clubbier settings, particularly themed parties where people might be a little more loosened up and willing to dance and rave to the fantastic music, or even on a big music festival stage at night. The bigger and louder a work like Androdes becomes, the more effective it is at immersion, and this is certainly one world we’d like to get lost in a little longer.

P.S. For some reason it was a strangely awkward experience standing around and watching Sartory perform. Something felt off, like people should actually be rocking out to these great tunes. So if you do come on down to catch this amazing android, do try to dance a little more and really get in the mood to enjoy yourself!

ANDRODES plays at the Cavern (The Vaults) till 19 Feb. Tickets available here. You can keep up with Sartory on her website and follow her on Twitter @ANDRODESLIVE

That’s all from us for VAULT Festival this week, but be sure to check out all these shows and the rest that the festival has to offer, most of which run till Sunday 19 February! We’ll be back again with more coverage of the amazing amazing VAULT Festival next week.