Essentially our last day in Kuching (our flight was an early morning one the next day), we decided to spend our last day trip taking in the sights and culture. Yes, that meant eating our way through Kuching before attending the concert that officially kicked off the Rainforest Fringe Festival later in the evening!

Finally getting some free time to ourselves, we decided to explore the area around the Waterfront Hotel. We couldn’t possibly have visited Sarawak without trying their speciality, so we started off the food trail with Kim Joo Kolo Mee on Carpenter Street. Kim Joo opens at 6:30am, so we were afraid that they’d have sold out by the time we reached it at 11am. Thankfully, there were still plenty of bowls left for us! Each bowl of kolo mee was served with char siew, minced meat and pig organs, and although simple, was a delight to have as our first meal of the day. We completely understand why it’s such a staple meal in Sarawak.

But one bowl of kolo mee can’t possibly satisfy our tummies for a Sunday brunch. Along Carpenter Street, in front of a temple, is the aptly named Temple Food Court, where a food paradise awaited us. Along with some friends, we ended up ordering satay and fishball soup, coupled with a saccharine sweet Teh C Special and refreshing Kedongdong fruit juice (better known as the Balonglong fruit in some parts). The highlight of our meal though was definitely the kway chap, which we’re pretty sure was the tastiest we’ve ever had. The best part? We couldn’t believe that we were paying only a fraction of the price we would have in Singapore, and each bite we took was heavenly. Later on, we even returned for dinner here to try the kway chap stall’s black bean fish and fish soup, which they only served after 4.30pm. 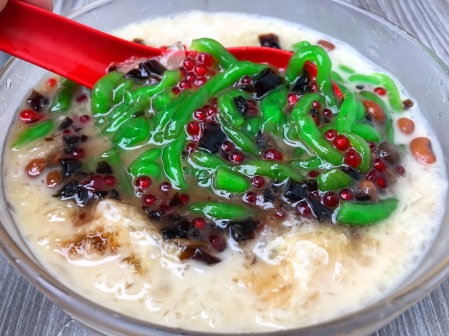 Walking back to the hotel, we decided to take a walk along and search for Ah Yong ABC Ice Kantong food stand, which was said to serve amazing chendol – perfect for dessert. We found it just off a small lane along the Kuching Waterfront, and were not disappointed. There was something very special about the chendol itself, which was springier than usual, and topped off with the gula melaka, was a bowl straight from paradise.

At this point, as caffeine monsters, we were dying for a good coffee. We heard that Black Bean Coffee on Wayang Street was good, and the perfect place for an Instagram-worthy shot, but unfortunately was closed today. We headed out a little further to Earthlings Coffee Workshop on Jalan Wan Alwi, a quaint little joint that felt like a log cabin with its lacquered wood floors and walls. Roasting their own beans, this was an exceptional alternative to Black Bean, with a cosy, relaxing space we could practically have hung out at all afternoon.

Come evening, we headed down to the Kuching Amphitheater to attend Sada Kamek: Music of Sarawak, a free concert featuring a lineup of musicians who originated from Sarawak, from traditional music to chart topping modern singers.  Upon arrival, we were impressed with the turnout from the public who came to support their favourite artists, and the entire amphitheatre was filled.

Sada Kamek translates to ‘Our Music’ in the Iban language, and was hosted by actor and singer Tony Eusoff. Starting off the show with traditional music were Sape experts Matthew Ngau and young Alena Murang, a rare female prodigy in the instrument, as they played a couple of evocative love songs. The traditional music soon gave way to a hypnotic fusion of past and present as Nadine Rhapsody took to the stage with a haunting modern rendition of a traditional song to summon nature deities for blessings.

The biggest discovery of the night had to be singer Pete Kallang, who we’d never heard prior to tonight. His plain outfit was a mere foil for his soulful, powerhouse vocals that rang forth from the stage, emoting the songs’ lyrics like a force of nature. His setlist was a fun mix of love ballads and upbeat, dance-able songs, both of which allowed his voice to shine. Kallang also has an incredibly infectious personality, and easily charmed the audience into getting up and dancing along.

Much like how yesterday’s Theatre of Clothes nimbly incorporated Sarawak’s traditions into its fashion scene, Sada Kamek was a showcase of how Sarawak had it all in the music scene, a place to accommodate and nurture the old, the new and everything in between. and nimbly able to combine the past with the present. As the official opening event for the Rainforest Fringe Festival, Sada Kamek effectively highlighted the many music talents that Sarawak had produced over the years, and ushers in the promise that there’s plenty more where that came from. 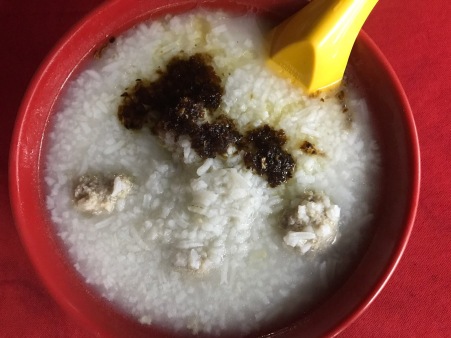 On a side note, the food journey wasn’t over yet, and we still managed to find time for supper! Right behind the hotel was the Open Air Market, and we had a taste of their Pork Porridge with Century Egg, along with a uniquely Borneo vegetable – the leafy ‘superfood’ sayur manis, fried with egg. We even fit in one last bowl of Red Kolo Mee as well! A tasty end to our day of what felt like non-stop eating, with only a break for the concert.

Right now, we’re back in Singapore to bring you your regular arts and lifestyle coverage and reviews, but we’re already missing Kuching. The Rainforest Fringe Festival continues to take place all the way till 16th July with more activities to participate in, so there’s still time to check it out! If you need a weekend away to explore a different part of Malaysia that’s still full of the rustic past, fabulous street and wall art, amazing food, and of course, countless cats, then Kuching is the perfect city for you to visit in the near future. 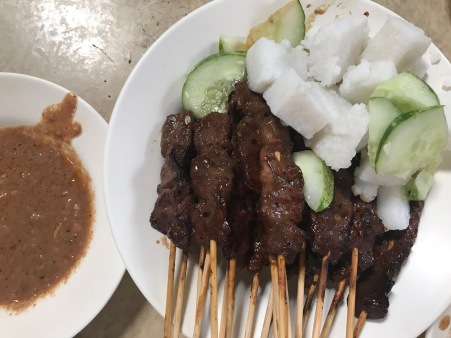 The inaugural Rainforest Fringe Festival takes place in Kuching, Sarawak from 7th to 16th July 2017. For more information and the full programme, check out their website here