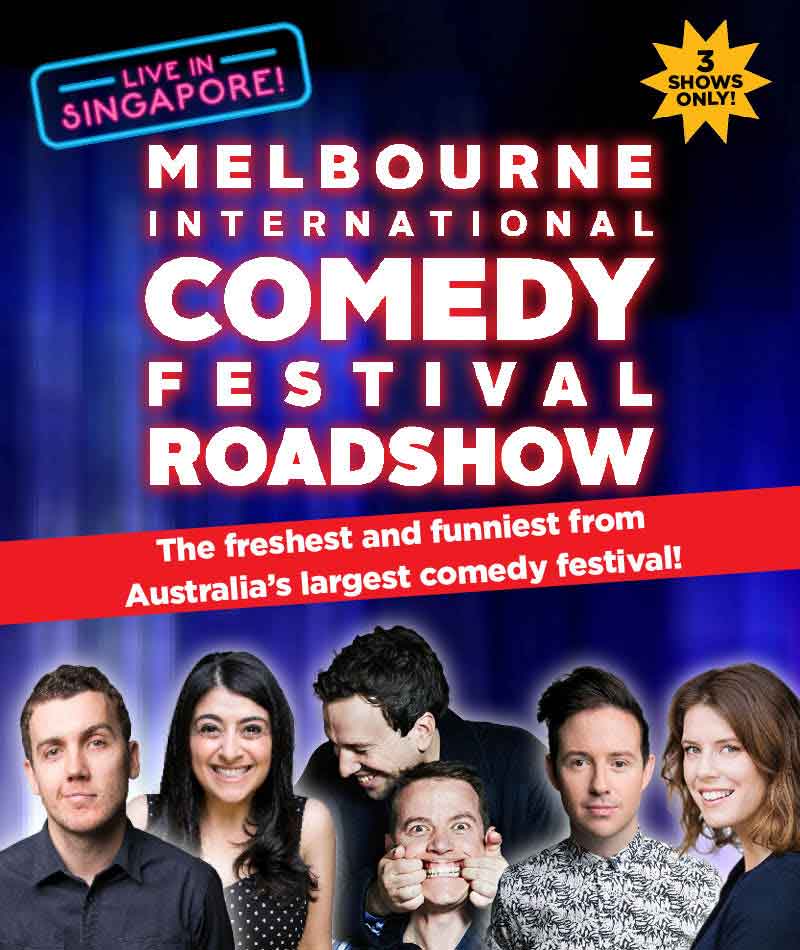 It never ceases to amaze us how time and time again, Australia is able to produce a seemingly endless supply of good comedians each year when the Melbourne International Comedy Festival (MICF) Roadshow rolls around.

Perhaps it has something to do with that cheeky Aussie spirit, where anything goes and no subject goes unturned without being a potential punchline. That spirit, accompanied by a general open-ness and friendly outlook, it what made this year’s lineup so successful.

This year’s MICF Roadshow was emceed by comedian Susie Youssef, whose constant smile was a source of comfort and joy throughout the show. There’s a genuine quality to her self-deprecating jokes that balances out with a sharp wit that makes just about all of her jokes land with ease. As an emcee, Youssef did a great job of warming up the crowd each time she came out onstage and always brought the energy up to welcome in the next act, easily drumming up hype and bringing the audience into her rhythm. Look out for her unforgettable ‘shortest relationship in the world’ sketch – literally just a one liner that left us guffawing.

Much like Youssef, the first act of the night was the brilliant Nath Valvo, whose sassy humour and relatable stories went over easily with the crowd. Despite going back to the usual topics of growing up and relationships, Valvo’s keen energy infuses these topics with a freshness as he lets loose with some honest truths about the people in his life, alongside big, exaggerated movements that really brought the jokes home. At one point, Valvo even brings out an old oversized school uniform for the sake of a single punchline (‘In my hand carry!’) and it’s effort like this that goes a long way towards liking him as a comedian and loving his jokes.

Speaking of props, Penny Greenhalgh was next up in line, and she performed a double character act. Coming out onstage as ’17-Michelin star Chef Claudine’, she poked fun at the Australian and French food scenes with her stiff, heavily accented French character, focusing on making food that was as ridiculous and inedible as possible, including a live ‘cooking’ demonstration. In her next bit though, Greenhalgh did a quick costume change and transformed into a budding ice skating star. Donning a pair of roller skates, Greenhalgh grabbed a volunteer from the audience to assist her with her outrageous slapstick choreography (on skates) to Beyonce’s Halo, leaving the entire audience open mouthed with how over the top the entire sequence was. Greenhalgh commits entirely to her acts, and that in itself is already powerful enough to create humour, not to mention how genuinely funny they are.

Prior to the break, guest star and local comedian Jinx Yeo also did a shorter segment with a few humorous anecdotes. Most of Jinx’s jokes take a while to land and a longer time to build up, and we thought we’ve seen better material from Jinx before. Nevertheless, when his jokes do land, they led to a couple of chuckles, and perhaps it just took a different frame of mind to appreciate his material tonight.

Even following the break, the energy of the comedians never let up. Daniel Connell started the second half with his extremely conversational style of comedy, His delivery calm, slow and deliberate, it’s easy to get lulled into a sense of relaxation before Connell circles around and comes back with a surprise punchline in the middle of it all. In an extended anecdote about a friend’s overseas wedding in Fiji, Connell successfully milks it for multiple payoffs, and was an easy segue into the second half of the show.

Ending off the show with a bang were headliners and Melbourne International Comedy Festival winners of Most Outstanding Show the Pajama Men, hailing from Albuquerque, New Mexico. Despite recycling a couple of stock jokes, the improv segments of the pajama clad lads were well done. Taking the premise of a news show, the improv segments came in the form of ‘guests stars’ that the men played, from a bumbling ‘animal expert’ with strange pets in tow, to a two headed alien from outer space who invited the audience to ask questions as they responded simultaneously, to some truly inventive results from their struggle to synchronise their speech and thoughts.

These comedians truly work hard, and this year’s MICF Roadshow lineup has been one of the most consistently funny ones yet. Easy to watch, with jokes and sketches that came hard, fast and dangerously comic, there’s no other show each year that quite assures you of a smorgasbord of quality funnymen and women. The roadshow heads over to Hong Kong and Kuala Lumpur next, so if you didn’t get a chance to catch them in Singapore, or you know friends who would appreciate a good comedy night, then you know where to go!