National Monuments can be a handful – walking past them, it’s easy to become immediately overwhelmed by how dwarfed we feel in their majesty and architectural brilliance. But what if one could see them from a different point of view, one that would let you observe them from all angles with almost all the details still intact?

National Heritage Board’s (NHB) latest touring exhibition does exactly that with Building History: Monuments in Bricks and Blocks, having commissioned local company My Little Brick Shop to design and craft scale miniature models of eight of our most recognizable National Monuments.The eight monuments featured in the exhibition are namely: Central Fire Station, the Former Nanyang University Library and Administration Building, the Former Tanjong Pagar Railway Station, Jurong Town Hall, the National Museum of Singapore, St Andrew’s Cathedral, Thian Hock Keng temple and Sultan Mosque. The exhibition has taken up temporary residence in the National Library’s basement for the month of June, before continuing its tour around other regional libraries in Singapore.

Says Ian Lee, assistant manager for the Preservation of Sites and Monuments division of the NHB: “Our final eight monuments were designed to showcase the differences in architectural style across our National Monuments – you’ve got the Neo-Gothic style of St Andrew’s Cathedral all the way to the brutalism seen in Jurong Town Hall, as well as highlight the structures that haven’t received as much media attention recently. We hope visitors can come away with a newfound appreciation for our national monuments, and with this chance to see them from a different perspective, perhaps they’ll gain more insight to explore them once again and take a closer look next time.” 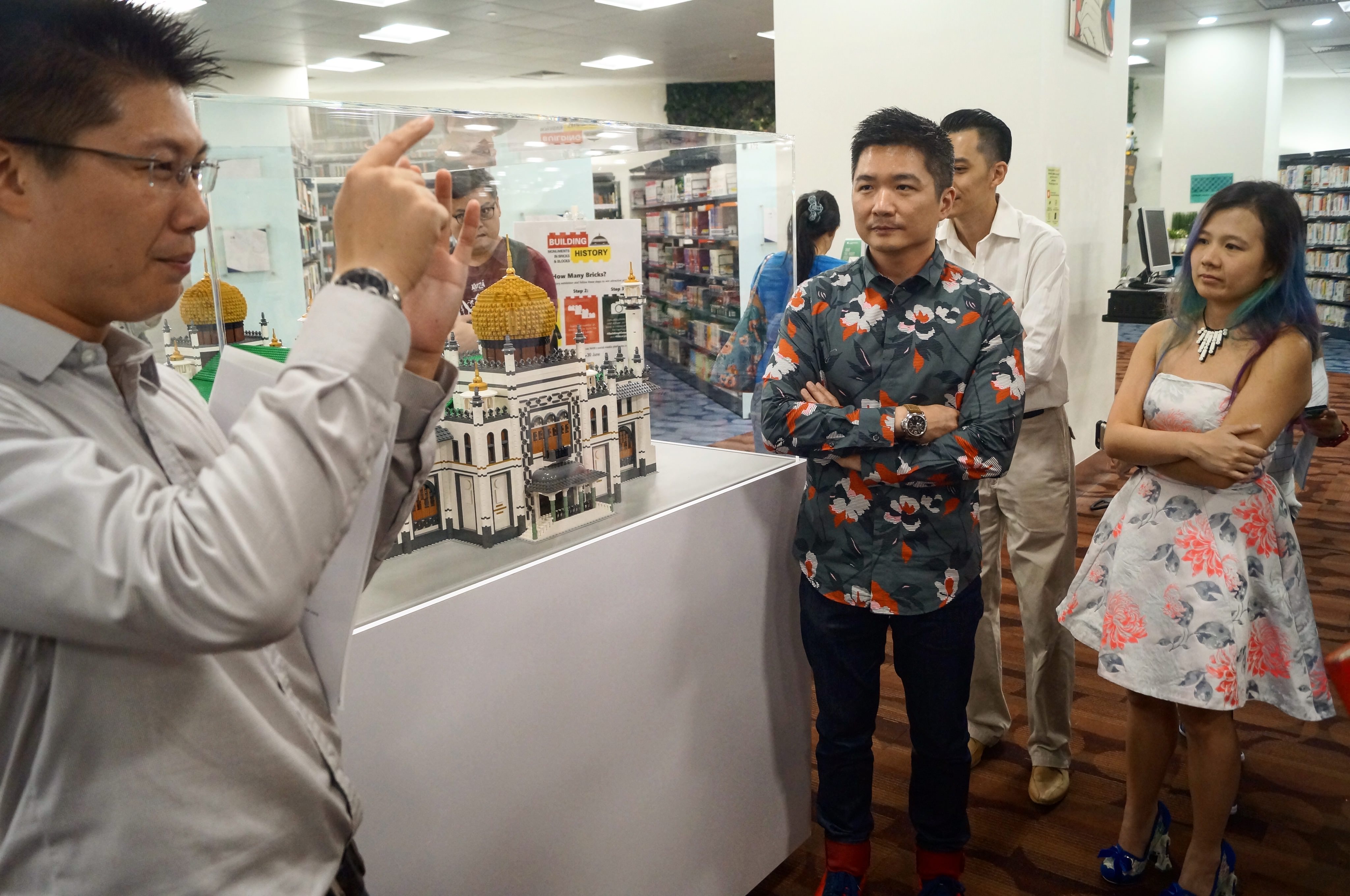 Over 110,000 toy bricks have been used to craft all eight monuments, which took over seven months to design and build. No effort has been spared to get all the details of each monument just right, from the stained glass windows of St Andrew’s Cathedral, to the mosaic flooring and altars in Thian Hock Keng, to the detailing of the minarets in Sultan Mosque. Each of these monuments fully use component parts from pre-existing toy-brick sets, i.e. no parts were specially made for the project.

Visitors also stand a chance to win attractive LEGO sets when they guess the closest number of bricks Sultan Mosque comprises of, and upload a photo onto Facebook or Instagram with the hashtags #BuildingHistorySG and #librarysg by 30th June 2018. A hint: 1,511 gold pieces are used for each dome, and of the eight monuments Sultan Mosque uses the most number of bricks, measuring at 1.38m by 1.3m and weighing in at more than 40kg.

Says Eugene Tan, part of the team that designed and constructed the monuments,: “In most of the buildings, we start from the most intricate point of the structure, usually the window, to figure out how small we can go without losing detail, and how large we can make it without being overwhelmed by its sheer size.”

Xylvie Wong, another member of the team explains how the design process was at times a difficult one, being given old guidelines and floor plans that did not necessarily reflect the final monument, while also expressing the challenge of capturing the essence of each building with the limitations of the bricks. Says Xylvie: “Our company actually focuses heavily on architecture projects, and the physical shop was more a means for us to showcase our work within a ‘gallery’ space, selling brick sets to offset the rental cost. Alvin Tan from NHB first came across us two years ago when we were doing a similar project for a Tiong Bahru heritage exhibition, and impressed, commissioned us to embark on this project.”

When asked if there was a monument she wish had been included, she answers: “I wish we were asked to construct Victoria Theatre and Concert Hall, because it has a lot of meaning for me personally. Back in my secondary school days, I was involved in theatre, and the school would rent out the whole place so we’d have free rein to run around and explore the whole building. I think based on memory alone, I could probably build it from the inside out.”

As part of NHB’s educational and outreach efforts, visitors to the exhibition can find out more about each featured monument on the ROOTS website after the exhibition sparks off their interest. Building History is a perfect way to ease a new generation into loving our own national history and the diversity of our architecture, coming in during the NHB’s Children’s Season and appealing to both actual children, and the child within us who played with toy bricks as we grew up.

Building History: Monuments in Bricks and Blocks runs at the Central Pubic Library (Basement 1) till 30th June 2018, before touring other libraries – Marine Parade in July, Jurong in August, Tampines in September, Ang Mo Kio in October, Sengkang in November and Choa Chu Kang in December. Admission is free.