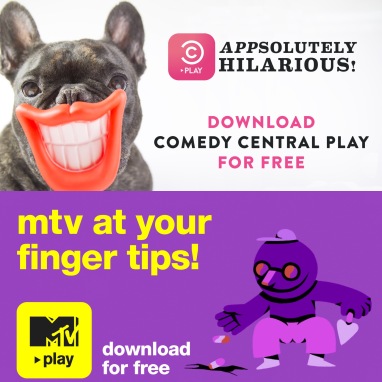 Both mobile apps are available for free download from the Apple App Store and Google Play store and can be accessed via the “Variety Plus Pack” of Singtel’s CAST, offering Singtel customers access to the best of MTV’s music, entertainment, reality and short-form content and an array of comedic entertainment including stand-up, talk shows, scripted and short-form content on Comedy Central.

While both MTV Play and Comedy Central Play are available with a selection of free content upfront upon download, access to premium content for both apps requires a subscription to “Variety Plus Pack” on Singtel’s CAST starting from $12.90 a month (with a 12-month contract) or $14.90 per month (without a contract).

The MTV Play app has features such as Play the Music, which allows for free access to the MTV curated music experience, from MTV World Stage events and MTV Unplugged features around the world, while users can even get exclusive priority to features such as MTV Play Firsts, where content will premiere on MTV Play before any other platforms in Singapore, including The Challenge: Vendettas, Million Dollar Baby1 and Just Tattoo of Us Season 22.

Last year, Apple named the MTV Play product to its Best Developers category on its App Store Best of 2017 list in the U.S. MTV Play, which is already available in 26 international markets, has been installed nearly 10 million times and has served more than 325 million MTV content streams. For music and laughs on the go, head to your app store now and download MTV Play and Comedy Central Play today.