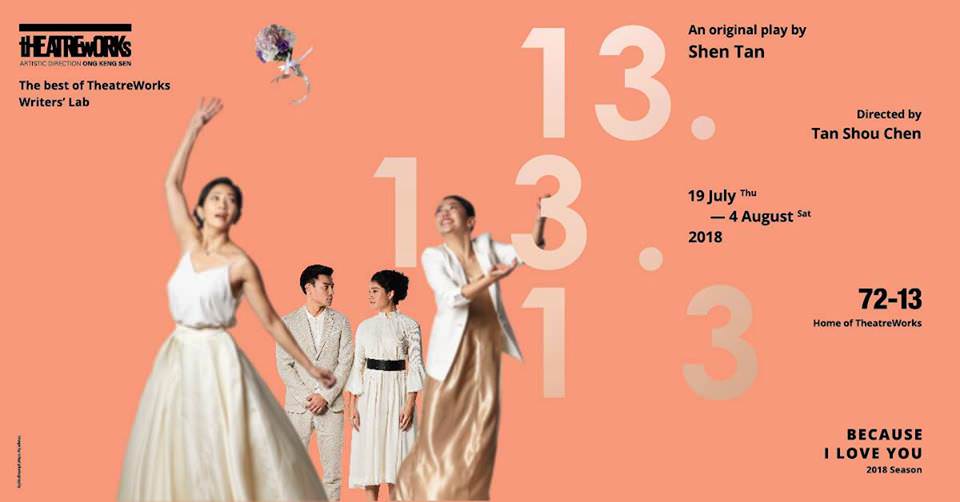 New writing in the Singapore theatre scene is always welcome, and to see Theatreworks provide a platform and continue to champion it is incredibly encouraging. To round off July’s Writers Lab month, Theatreworks then presents the professional debut of playwright Shen Tan, with her play 13.13.13. 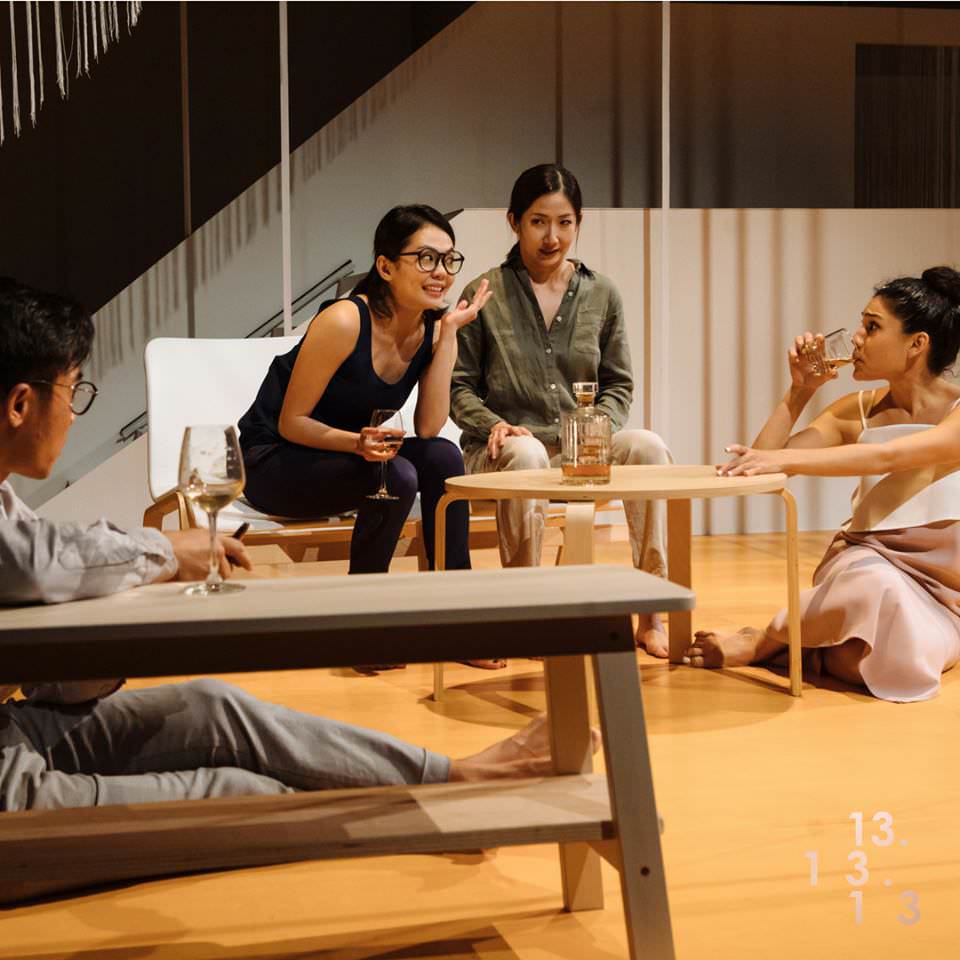 Directed by Tan Shou Chen, 13.13.13 follows William and Samantha (Thomas Pang and Sharda Harrison), a couple living in unmarried, childless bliss. Contrast that with William’s best friend Lynn (Jo Tan), who wants to get married to her partner Kate (Chanel Chan) and bear their own children, but legally cannot do so. When William tries to help them out, he and Samantha’s fragile existence as a couple begins to crack as clandestine secrets and decisions threaten to tear all four lives apart. 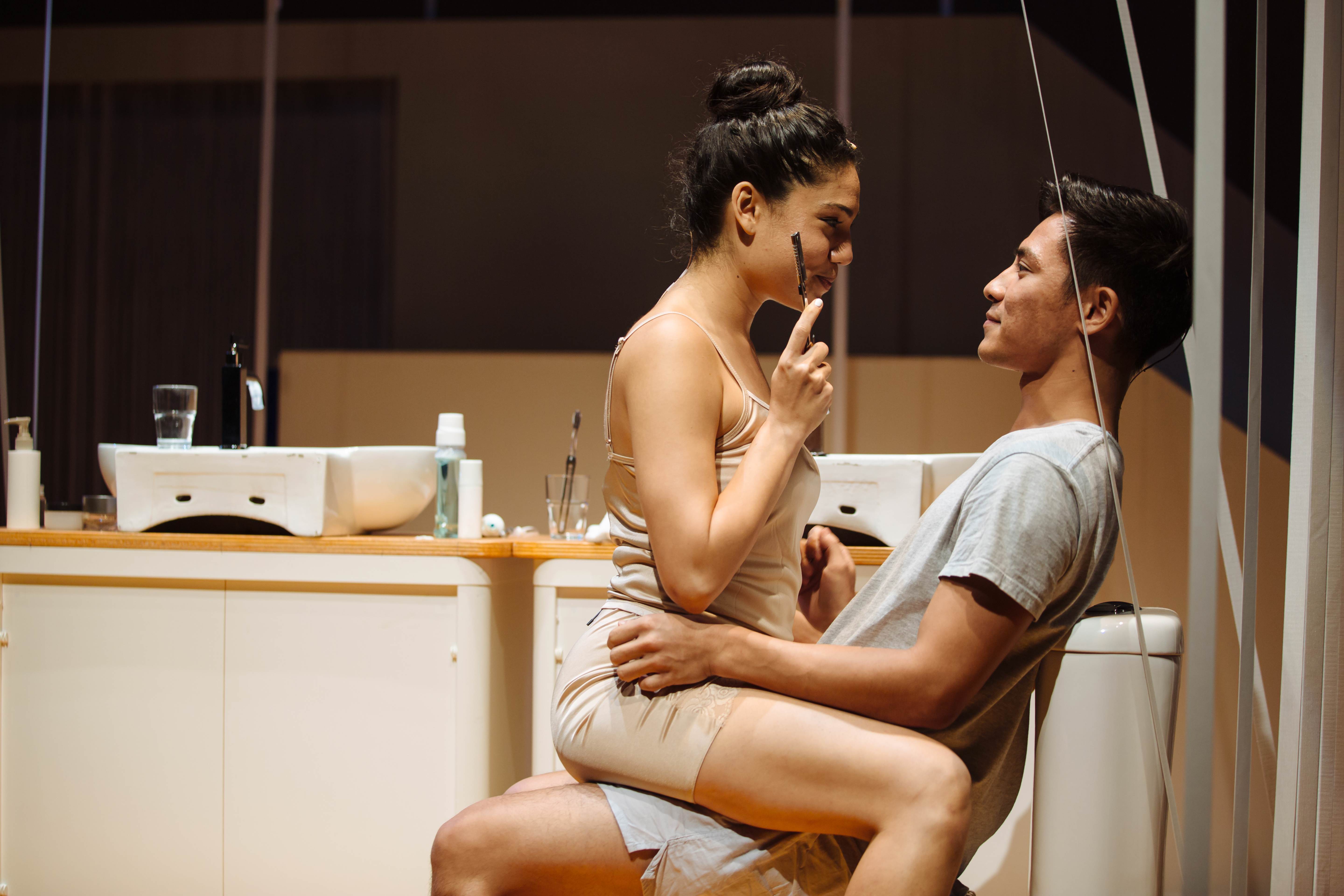 Conceptually, 13.13.13 is an ambitious play that attempts to provide commentary on modern love and its complications. Shen Tan has plenty of ideas up her sleeve, and it’s evident how many issues she intends to cover over the course of the play, ranging from the failure of traditional love, to LGBTQ issues, to death. There is a good effort in trying to endear each of its four characters to the audience, ranging from Lynn and Kate’s first meet-cute at a club (Jo Tan delivers her signature brand of awkward humour here), to the secret bathroom rituals between William and Samantha to showcase their closeness. 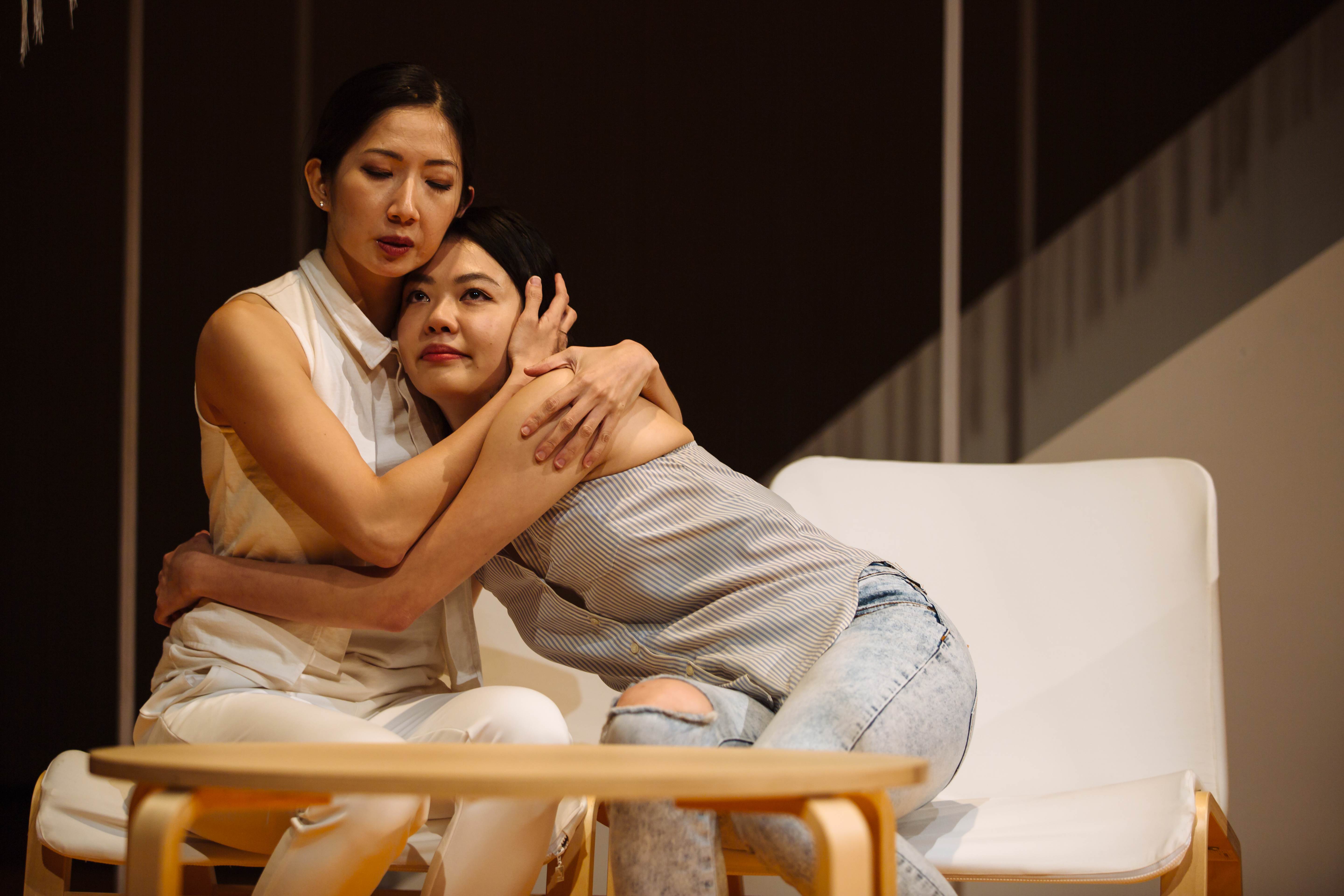 Shen Tan has plenty of promising ideas embedded in her script, with the domestic chaos within it escalating quickly over the course of the play to unimaginably tragic extents. An issue we had was the difficulty we found in connecting with the characters, with lengthy lines of conversation that felt a little unnatural, leaving us unable to fully appreciate the emotional arcs each individual goes through. That’s not to say the acting was bad; Sharda Harrison in particular, tries her best to infuse each scene with a sharp intake of emotion, bringing palpable anger, sadness and joy to her appearances. However, one wishes each character was more fleshed out emotionally, and that actors had stronger chemistry onstage to better feel and bring out their romance and subsequent falling outs. 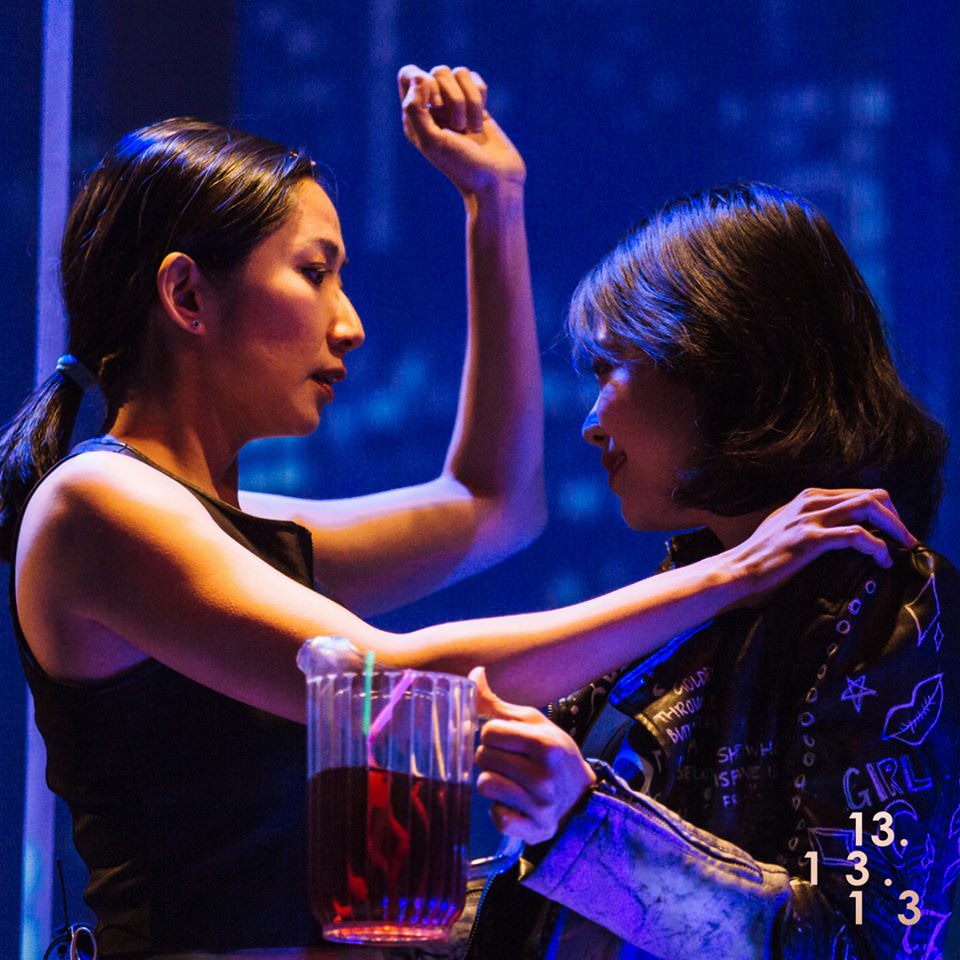 For all its domesticity and natural setting, 13.13.13’s staging goes surprisingly abstract at times. Visually, there is a lot going on, as Chan Silei’s set evoking the domestic setting of a living room and a bathroom, with white, elastic ribbons all around, reminiscent of wedding streamers. These ribbons act as visual ‘doors’ and ‘curtains’ for actors to pull aside in each scene, and could be interpreted as the many unseen lines of connection and the tangled webs we weave amongst each other in our daily lives.

The space however, is mostly underutilised, with the majority of the action happening in only two ‘rooms’ and leaving the rest of the set bereft of drama. While little details such as utilising actual Australian currency while the characters are in Australia are appreciated, Brian Gothong Tan’s video work feels extraneous for the most part, most effective when it is used to evoke the sense of place (a shot of an HDB block clearly localises the play). 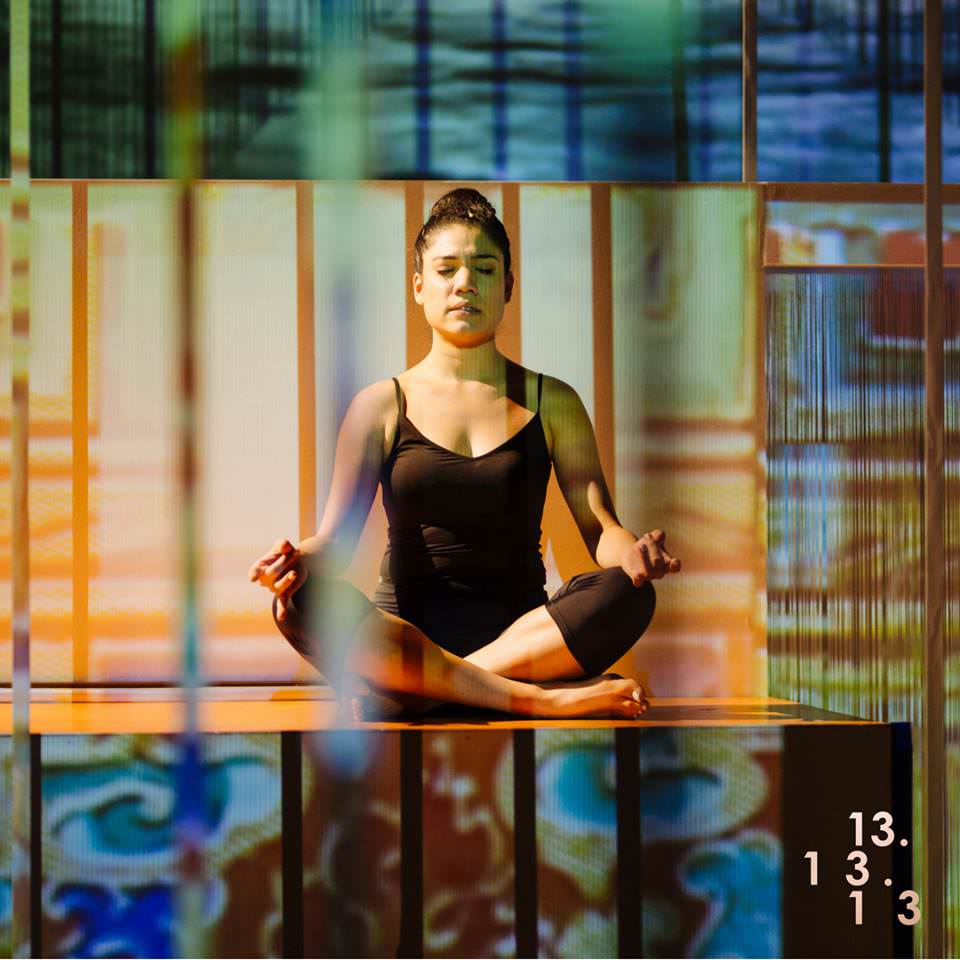 13.13.13 is an off-kilter look at the extremities of modern love, and the pitfalls that come with it. There are some strong ideas embedded in the script, and its rawness and structure might be tempered with further incubation and edits. Still, there are occasional moments of brilliance that flash by from time to time, bordering on pure art, 13.13.13 can be revisited and tap on those strengths to come out and become the great show it has potential to be. 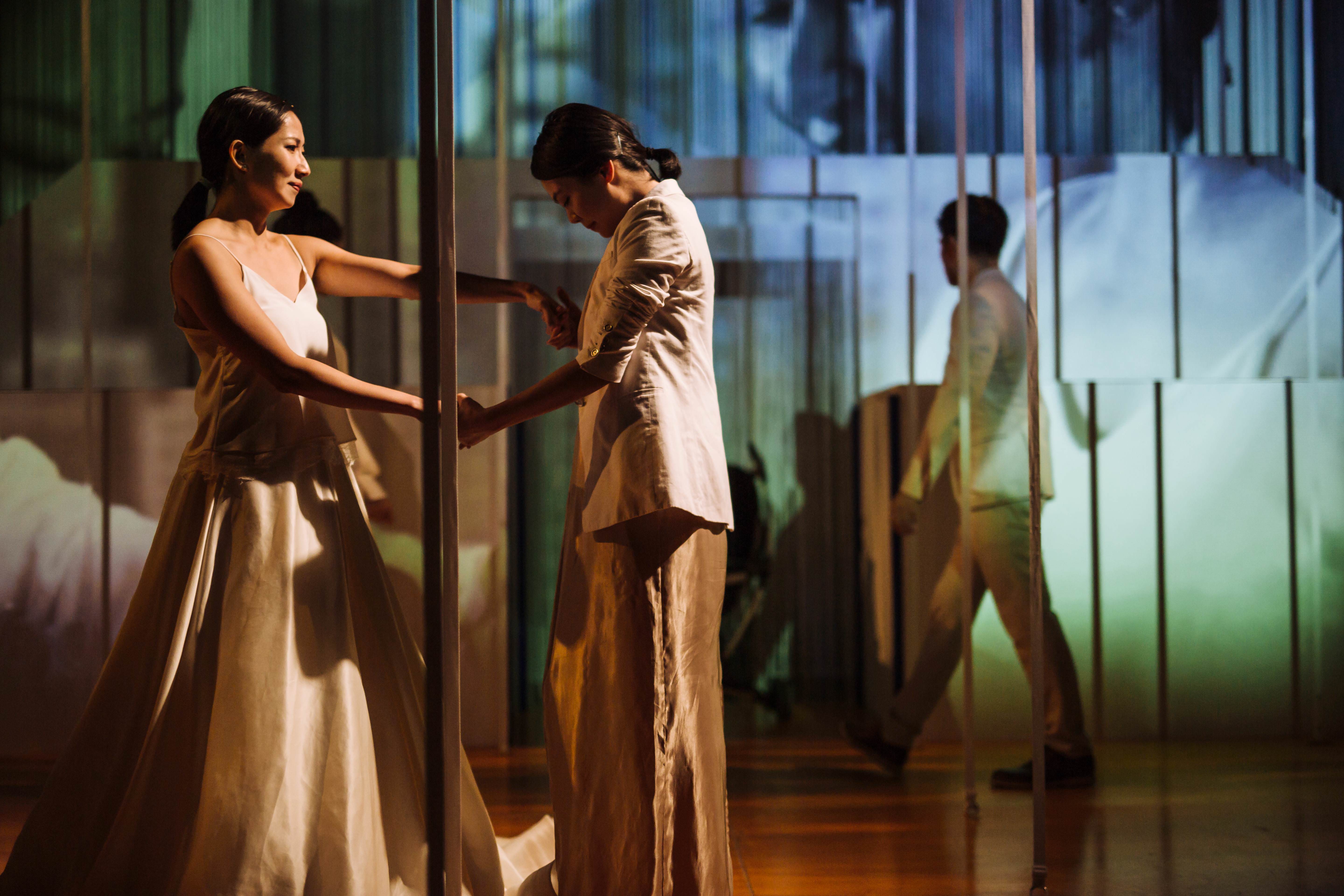