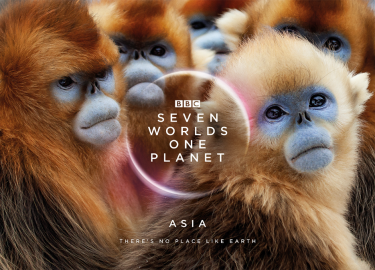 Seven Worlds, One Planet, from BBC Studios’ iconic Natural History Unit, marks the first time it has explored all the planet’s continents in a single series – and the filmmakers have employed new technology, including boundary-defining drone techniques, to capture unique perspectives, new species, and animal behaviour never before seen.

As well as showing where humankind is negatively and positively impacting the health of the planet, viewers will witness sequences such as: the world’s most bizarre predator in the Iranian desert; grave-robbing hamsters in Austria; one of the largest and rarest animals on the very brink of extinction in Kenya; and polar bears using a never before seen hunting strategy to catch beluga whales in North America’s Hudson Bay.

Says presenter Sir David Attenborough: “I’m thrilled that we’re about to share this incredible series with the world, which has been four years in the making by more than 1500 dedicated people, on every continent. Seven Worlds, One Planet celebrates biodiversity and the variety of life on our planet whilst also shining a spotlight on its challenges.”

Seven Worlds, One Planet premieres on Monday, 4th November 2019, 9.00pm on BBC Earth (StarHub channel 407). Download and watch the series on BBC Player, available as an app on both Apple and Google Play stores, and at www.bbcplayer.com