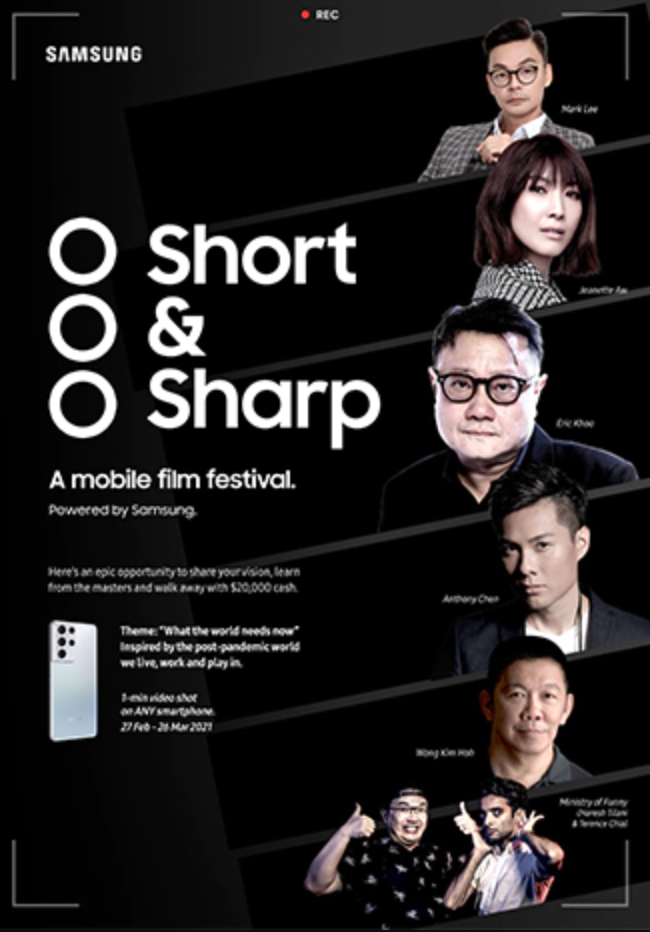 Ahead of the Festival in May, Samsung is commencing a call for entries starting from 27 February for aspiring storytellers and serious content makers to submit a 1-minute short film shot on any mobile phone based on the theme “What the World Needs Now” –inspired by the new world we live, work and play where the pandemic has moved us to express our hope, joy, compassion and humanity in new ways.

15 shortlisted finalists will get to work with the who’s who of the local film and content industry, with the winner walking away with a cash prize of $20,000, Samsung products and an opportunity to produce Samsung-branded video content in 2022. They will create content using the Samsung Galaxy S21 Ultra 5G while working with luminaries such as award-winning filmmaker Eric Khoo, three-time Golden Horse Award-winning director Anthony Chen, veteran performer and King Kong Media Productions founder Mark Lee, actress and founder of Picturesque Films Jeanette Aw, Ministry of Funny’s Haresh Tilani and Terence Chia, and The Straits Times Life! Deputy Editor and screenwriter Wong Kim Hoh.

“If not for short films, I doubt I would be making features today. Working on my early short films provided me with the best training and preparation for my big dive into features,” says Eric Khoo. “I believe very strongly in the importance of short film competitions as that was the platform by which I started my own career. Not only that but over the years, I have also discovered many promising and talented directors through these competitions.

“I am moved that Samsung has organised its own short film competition and I eagerly anticipate the discovery of new gems! Definitely, technology has made film making much more affordable for budding directors. I think it would be fantastic if we could all create something wonderful together combining the love of storytelling with an incredible new device!”

“Some of the best films that have left an indelible impression on me have been short films. It is a medium close to my heart as it is by making short films that I honed my craft. Many might remember Ilo Ilo winning at the Cannes Film Festival, but it was through a short film (Ah Ma) where I won my first award in Cannes,” adds Anthony Chen. “It is wonderful to see Samsung embark on this endeavour to nurture young filmmaking voices through ‘Short and Sharp’. I am thrilled to be part of this journey and can’t wait to discover a new generation of film talents and present them to the world.”

All co-created content from the finalists and the participating auteurs will be showcased at the Short & Sharp Film Festival. More details will be announced at a later date.

“We’ve seen the rise of digital content creators in recent times and new consumer habits influenced by the pandemic has also driven the consumption of digital content. Technology now plays an important role in fulfilling a content creator’s vision in telling stories that matter. With the inaugural Samsung Short & Sharp Film Festival, we want to put the power of our smartphones in the hands of budding filmmakers so that they can leverage on our advanced camera features to tell stories that relate,” said Sarah Chua, Vice President, IT & Mobile, Samsung Electronics Singapore.

The top-of-range Galaxy S21 Ultra 5G features a 108-megapixel camera to capture details and depth that are critical in emotive storytelling. It also supports 8K video recording, as well as Super Steady feature for action-cam-like quality in which AI stabilisation delivers gimbal-smooth video – even as you capture fast-moving action. All new videography innovations such as the Director’s View and Enhanced Single Take offer new tools and ways for storytelling, so that users can choose the best output to suit their storyline.

Theme: “What the World Needs Now”

Format: A short film shot on any mobile phone

Grand Prize: Cash prize of $20,000, Samsung products (including a Samsung Galaxy S21 Ultra 5G smartphone). Winner will also have an opportunity to shoot video content in partnership with Samsung in 2022.