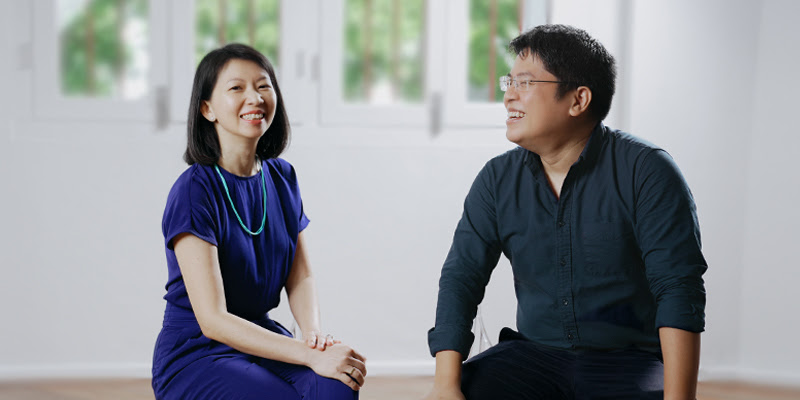 Led by Artistic Director Dr. Ong Keng Sen, T:>Works continues to expand its mission of pioneering thought leadership in the arts in 2021. No longer just an institution that produces new work and exhibitions, T:>Works will introduce a fellowship platform that cuts across silos, disciplines and fields. Supported by a seed fund, T:>Works is committing one million dollars over three years to kickstart a fellowship programme, which will support knowledge production, research, and contextualised practice from April 2021 to March 2024. Further funds will be progressively raised in these three years to sustain the fellowship programme.

T:>Works will welcome two members joining the team as part of its regeneration and integration of a younger generation of creative individuals: Traslin Ong and Brian Gothong Tan. Collaborating on multiple occasions with the organisation over the past three decades, Traslin and Brian will bring a synergistic slant to the organisation’s futures-oriented vision.

Established arts administrator Traslin Ong is known for her decade-long engagements with esteemed institutions in New York such as the Brooklyn Museum and the Museum of Chinese in America after her graduate studies in New York University. Building on her experience as a manager at T:>Works from 1999 to 2004, Traslin will take on the custodianship role of Executive Director, encompassing the areas of strategic partnership and legacy-building, as well as, charting the future direction of T:>Works.

“Buoyed by years of working in cultural institutions in the U.S. that shaped how I work with artists and engage with communities, I now return to T:>Works, and a Singapore arts landscape, both of which have changed vastly from 20 years ago. For me, that’s an exciting place to be in, both artistically and operationally,” says Traslin. “I am now charged to effect change and steer T:>Works towards the next phase of its artistic journey. I look forward to asking questions and formulating plans on how to support and sustain artistic endeavours for T:>Works, as well as extending care to create an inclusive, safe space for the next generation of arts practitioners.”

“I’m inspired to push the boundaries of both visual and performing arts, something that came from my time in New York, where there was so much cutting-edge work in a vibrant and thriving independent arts landscape that fed into the energy of the city,” Traslin adds. “And in Singapore, it’s so gratifying to see so many new arts groups and artists, and I’m excited to be in a position to nurture and sustain that, listening to them to better support them. It is important to maintain our voice in this international landscape, to contribute to the richness and diversity of art inside and out of Singapore. I am happy to steer T:>Works towards the next phase of its artistic journey, finding opportunities to create a safe space for the next generation of artists, and how T:>Works is committed to constantly boundaries, develop new creative processes cutting across disciplines and fields, and evolve as powerhouse of thought leadership.”

Having worked with T:>Works on projects since 2007, multimedia artist Brian Gothong Tan will direct an artistic atelier within T:>Works for the next three years, following the third instalment of theatre artist Noorlinah Mohamed’s three-year residency helming the Festival of Women N.O.W. (not ordinary work). Brian’s first new work with T:>Works will premiere in October 2021. Titled 100 Microfilms, the work is a seven hour long immersive, site-specific experience driven by the sleep-dream cycle, with more details to be released soon. Plans are in the making to apply for permits to film in Thailand, while Brian’s follow-up works are set to be more physical in nature, including a grand finale in 2023 where it will all conclude with a durational, site-specific work.

“I’m very excited to work with my new T:>Works family, especially in these strange times, where we are saying goodbye to the old world order and watching a new one being born right in front of us,” says Brian. “I think it is a blessing to have this window to articulate and redefine the world that we live in. T:>Works is one of those rare companies that has evolved and transformed radically over the years and I am energised to push boundaries and contribute to this body of work.”

“There’s so much instability in the world, and my own life, and I’ve spent a lot of the pandemic doing soul searching and reflecting on my own practice. Having started in visual arts, then theatre and film, I feel like all my work over last few years has always been challenging forms,” says Brian. “This atelier is a way of formalising my body of work after creating non-stop. Dr Ong Keng Sen has influenced some of my artmaking in terms of thought leadership, to resist the negative effects of globalisation and identity politics, something that’s lacking in Singapore, which is much more focused on thought policing. This space is important for us to imagine, and for new ideas to arise for creators in Singapore.”

Dr. Ong Keng Sen, Artistic Director of T:>Works, says: “This is a pivotal time of stepping into the new decade beyond the pandemic. We believe in and support the thought leadership of artists. We align ourselves to their vision rather than just their artworks and hopefully they align themselves to our vision. We seek to foster a flat landscape of horizontal thought leaderships, rather than vertical hierarchies. We also intend to redefine arts management as a field of arts care, and move away from a model of efficiency and productivity above all else. Carrying out our mission requires the right team, and it is gratifying to welcome both Traslin and Brian back into the team, as we collaboratively write a new chapter for T:>Works.”

Galvanised by the upheavals dominating the new decade, T:>Works is doubling down on its mission and vision of pioneering thought leadership focused on transdisciplinary, transcultural, and inclusive processes in the arts. In particular, beyond the pandemic, T:>Works will be focused on translocal practices, as a new dimension of the transforming international landscape.

A new fellowship platform by T:>Works will open to situated practice in the diverse local contexts around the world. The Fellow may be based in another localised context, and knowledge as well as research produced there will be digitally shared with the publics in Singapore and internationally. The fellowship is open to collaborative ventures between artists, scientists, writers, curators, activators, creative communities, amongst others.

To this end, T:>Works is particularly attuned to the making of potential futures that speak to the ethical interconnections between cultures, humans, species, and other forces that animate our physical world. From advancing cultural development in the new millennium in The Flying Circus Project, an alternative university and a nomadic artist residency of international artists engaging with local contexts, to spotlighting intersectional solidarity and alliance for projects created and developed by women making positive change in local communities with N.O.W., ethics light up the trajectory of T:>Works.

In this new decade, T:>Works seeks to develop knowledge production in hopes of sustaining futures on a planetary level, beyond cultural, geographical, ideological and national borders. “As humans, we produce knowledge on a daily basis. But how often do we think about the implications of our knowledge production?” asks Dr Ong. “Knowledge can be used to connect and bridge. It has also been used to divide and conquer. By threading ethics throughout T:>Works’ journey from the ‘90s till today, T:>Works, as an independent arts organisation and a thought leader, brings with us a new way of being and acting – guided by care and, hopefully, repair – into this new decade.”

Remaining true to its mission of providing educational perspectives through research and discourse situated within Southeast Asia, T:>Works has named this fellowship platform, PerForm, which is centred around the idea of leaving nobody and nothing behind. Initiated by Dr. Ong, PerForm harnesses the contexts of multiple ‘locals’, such as situated knowledge, local practices, or a fellow’s sustained engagement with local communities around the world. PerForm brings the audience of this fellowship programme back to the basics of acting in our personal capacities and performing one’s personal responsibilities to create liveable societies.

The first six fellows of PerForm 2021 are: Ho Rui An, Jerrine Tan, Munirah Mansoor, Nurul Huda Rashid, Shubigi Rao, and Wong Bing Hao, with more fellows from the Global South to be released in the later half of 2021.

“Possible futures are already happening close to home or in diverse contexts in the Global South,” says Dr Ong. “It may involve knowledge which has been forgotten, left behind, or even repressed. We need to listen differently to other voices, not just speak differently. PerForm zooms into these local, situated projects, and posits the question: How do we, as common custodians of this planet, continue life for everyone and everything? Using knowledge production as a vehicle at PerForm, T:>Works seizes upon the same ethical urge, felt in both the ‘90s and in the new millennium, to transform the world, and to perform our responsibility to sustain the planet. It is imperative that we perform differently from just making art. We need to learn and figure out how to live together, once again.”

In the coming months, members of the public can also look forward to a new digital production in May, a digital lecture in May, and the upcoming third edition of Festival of Women N.O.W. (not ordinary work), a three-week interdisciplinary event spotlighting women creators and changemakers led by theatre artist Noorlinah Mohamed in July, themed around transgression, fear and intimacy. This will also include the 2021 edition of the 24 Hour Playwriting Competition, before Brian Gothong Tan presents 100 Microfilms in October. The year will close with the 2021 edition of How To Break A Window, showcasing the winning pieces of the 2021 edition of the 24 Hour Playwriting Competition.