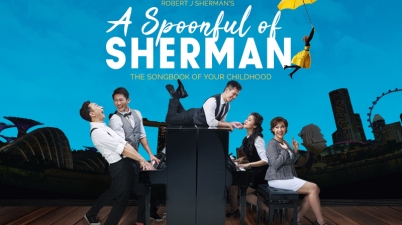 Sing’theatre’s A Spoonful of Sherman: An Interview with Sing’theatre Artistic Director Nathalie Ribette

Sing’theatre has been around for a long time – since 2007 in fact, and each year, they’ve only been upping their game with bigger production value, better performances and always […]

Preview: A Spoonful of Sherman by Sing’theatre

Brand new musical revue A Spoonful of Sherman by Robert J. Sherman is coming to Singapore, in its Asian premiere this November! Featuring songs from Oscar-winning brothers Richard M. Sherman and […]

An intimate production that hits the right notes.  There are few opera singers quite as infamous as Florence Foster Jenkins. Known precisely for her inability to sing, Souvenir recounts the unlikely friendship […]

This September, Sing’theatre returns with an all new production of Souvenir! Based off the life of opera singer Florence Foster Jenkins, famed for her inability to sing, Souvenir! promises a show that will fill […]

Preview: Souvenir – A Fantasia on the Life of Florence Foster Jenkins by Sing’theatre

Meryl Streep may have popularised the story in a 2016 film, but this year, watch the story of infamous tone deaf opera singer Florence Foster Jenkins come to life onstage with […]

If you think there’s nothing to look forward to but retirement and CPF after becoming a senior citizen, think again, as Sing’theatre presents their 10th anniversary production this October […]