Review: The Sewing Group by The Royal Court Theatre

It’s hard to pin down what exactly the latest play from E.V. Crowe is about. The Sewing Group starts off set in the 1600s, when a young woman (Fiona Glascott) is newly introduced to a village who seems to do nothing but sew. In a series of scenes, she speaks cryptically to her group, consisting of two other women (Sarah Niles and Jane Hazlegrove) on sewing, and over the course of the play, it’s revealed that she’s been sent to the village to live with her aunt (Nancy Crane) and uncle.

Things begin to move once said woman begins to assert her authority though, and attempts to take control of the situation and group, bringing in a new member (Alison O’ Donnell), and slowly becoming more paranoid, aggressive, attempting to assert power and leadership, to the point she accuses the new member of stealing her watch and obsessing over the minute details in each patchwork quilt created, deducing complete histories from the opaque black cloths the audience members see, observing semen stains and blood.

The audience is only ever privy to the claustrophobic, limited space of the wooden walls, the women clad all in black, almost like a coven of witches preparing some kind of heathen spell, and one almost feels like peering in to some kind of arcane ritual, perhaps brought on by some kind of cabin fever. For all its seriousness, there are moments of comic relief, such as our protagonist’s declaration that she is ‘gluten-free’ when offered some bread, or the revelation of one woman’s husband’s death by runaway bullock: ridiculous yet strangely compelling. 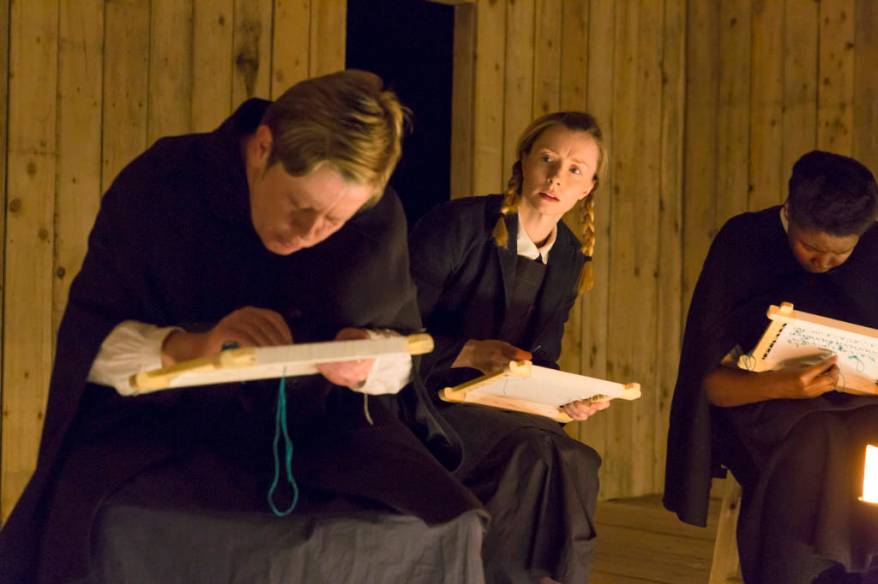 Just about nothing happens at all, and almost none of this makes sense, until our protagonist breaks the spell. It is revealed that she is in fact, undergoing a test of some sort, being assigned an arbitrary score by the village chief (John McKay) based on her (terrible) performance, almost cast out for her abusive language and non-conformity. Although we expect a Wicker Man type twist at this stage, our protagonist instead strips away her black clothing to reveal a scarlet dress underneath, begging for another chance to make amends, as the others begin to shed their outer layer of clothing too. Although unexpected at first, all is revealed once the walls come fully crumbling down on this ‘simple life’, and the tiny clues leading up to it all make sense.

The Sewing Group is a strange piece that disturbs as much as it confounds, breaking scenes with complete darkness and rooms lit seemingly only by candle light. The wooden cabin automatically creates a sense of tightness, with the women hunched over their sewing kits, darning and talking only as necessary, and we are constantly tense, awaiting for something to happen and break the monotony, much as the protagonist eventually succumbs to. The concept is interesting by far, taking inspiration from various other ’15 mintues into the future’ type narratives, a la Westworld or Black Mirror, though not quite as successful, due to spending far too long building up its world only to suddenly pull the rug from under it, which almost feels like a twist by M. Night Shyamalan.

What it does succeed at however, is its exploration into a possible future in which we begin to privilege the nostalgia of the past more and more, to the point we have to escape to it entirely, a primitive world of ‘no phones’ and endless mundanity, if only to leave behind this modern life of endless bombardment of information and responsibilities. But The Sewing Group reveals that no matter how far back we try to fly, there are simply inescapable responsibilities of the present, and even the mundanity of the simple life can lead to complications. The simple life may seem like a great escape, but the truth is, it could well be a prison. With its esoteric language and puzzle like unveil, this latest play from Crowe will leave you thinking about its core themes of escapism and dealing with guilt long after you leave the theatre.