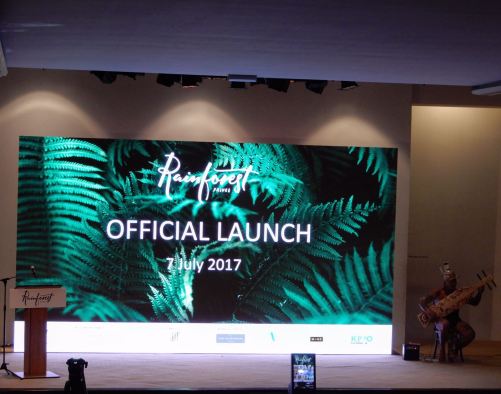 Big news: Bakchormeeboy is on location this weekend! From 7th-10th July, we’ll be in Kuching, Sarawak providing coverage of the opening weekend of the very first Rainforest Fringe Festival (RFF). Be sure to follow us on Instagram as well @bakchormeeboy so you don’t miss a single minute of the action!

Organized by Joe Sidek Productions, the same brains behind the wildly successful George Town Festival in Penang, the Rainforest Fringe Festival acts as a precursor to the annual Rainforest World Music Festival, also held in Kuching. But don’t be fooled into thinking it’s just a pre-event; in fact, the Fringe Festival is a full length festival in itself, with everything from art exhibitions, film screenings, fashion galas and music concerts, all celebrating Sarawak’s unique culture and heritage.

Stepping into Kuching for the first time, we weren’t entirely sure what to expect. The main thing we looked forward to of course, was trying some of the famous kolo mee. But as we sat on a bus on the way to our accommodation at the Waterfront Hotel (a self-coined art-rageous hotel), we fell in love with the countless old shophouses that lined the streets, and the meeting between historical and modern in this charming city, the ideal location to hold the RFF where past meets present.  Kuching also means ‘cat’ in Bahasa Melayu, and we even ran into a few of the adorable critters as we explored the area. Perhaps this was a sign of good fortune that we were about to discover something truly amazing and forge fond new memories over the rest of the weekend.

At the opening ceremony today, RFF director Joe Sidek himself was present to address the crowd, commenting on the similarities between Penang and Sarawak in their fierce pride in their state identities, always willing to stand up and defend it. In that sense then, the RFF acts as the perfect platform to showcase Sarawakian culture, offering an opportunity to show the world what Sarawak is all about, whether it’s in the unique batik prints, or in its delicious food. Today’s opening ceremony was officiated by guest of honour YB Datuk Haji Abdul Karim Rahman Hamzah, Minister of Tourism, Arts, Culture, Youth and Sports Sarawak, who expressed the government’s strong support and enthusiasm of the festival, paving the way towards putting Sarawak on the map as a future arts and cultural destination.

As the festival opened, visitors were invited on a guided tour around the various art and photo exhibitions set up in rooms around the rustic Old Courthouse. The two exhibitions we were looking forward to most did not disappoint. We were enchanted by photojournalist Jimmy Nelson’s stunning collection documenting the various indigenous communities he met on a five-year journey across Europe, Asia, Africa, South America and the South Pacific. Each photograph captured the dynamism and beauty in each community’s culture, every one of them worthy of a centrespread. In a similar vein, Sarawakian native K.F. Wong’s unique black and white documentation of local tribes using only a Rolleiflex camera acts as a blast to the past, capturing the tribes’ essence and the intricacies of their tradition.

Aside from those exhibitions, the Berawan 1955 exhibition (held in the Kopi C cafe) also caught our eye, featuring high quality prints from a selection of painted panels that survived from 1955, originally designed by six designers from Long Jegan. These panels were initially used for the ceiling of the Court House, and can easily be imagined as splendid prints and motifs applicable to textiles and design today. Alena Murang’s haunting images of nature and locals continued to remain in our memory long into the night, the expressions of her subjects realistic and revealing.

Towards the evening, we headed over to the Telang Usan hotel to experience some of Sarawak’s traditional music, alongside trying a dinner that utilised natural ingredients sourced from nature, appropriately titled ‘Harvesting the Wild’. One of the most interesting dishes was the Midin kerabu – fiddle head jungle ferns marinated in lime and ginger, that was served as an appetizer. One wouldn’t usually imagine these ferns as edible as you see them growing in the wild, but they possessed a unique taste and texture, like a mix between okra and spinach. They say the best way to experience another’s culture is to consume it, and consume we did, as we were also introduced to several traditional Sarawak dishes. The appropriately named umai-umai appetizer was a Sarawakian parallel to the Spanish ceviche, marinating raw fish in a mixture of onions, chillies, salt and lime juice.

The dessert counter was also a huge source of interest, with Sarawak kueh lapis and fruits such as purple dragonfruit which most Singaporeans would already be familiar with. But there were also a few mystery snacks that were completely new to us, such as the Tabaloi and Kuih Cincin, two very different biscuit-type snacks that we couldn’t get enough of. 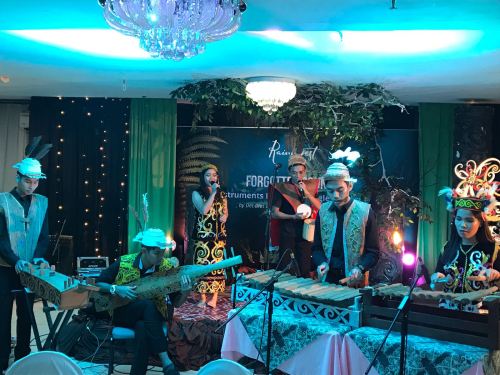 As we tasted our way through Sarawak’s culture, there was a simultaneous feast for our eyes and ears going on too, where a performance was taking place on the stage in front. Titled ‘Forgotten Sounds’, we were treated to various groups performing traditional Sarawak music and Kenyah river songs with unique wood and bamboo instruments. The ethnic music was a perfect accompaniment to our meal, and we loved the enthusiasm from the youthful but talented performers from the Det Diet Ensemble and the Borneo Bamboo Band.

Thus ended Day 1 of our introduction to Kuching (Sarawak) and its traditions, a belly full of good food and a head full of amazing sights and sounds, an indubitably promising start to the RFF. Armed with a newfound interest in Sarawak’s culture scene, we can’t wait till tomorrow when we’ll actually get to take a piece of Sarawak back home with us at the Craft and Vintage Market, and to check out how tradition informs modern design in the fashion gala in the evening. Watch this space for our coverage of tomorrow’s events, and if you want to be even more kiasu and know exactly what we’re doing, give us a follow on Instagram too!

The inaugural Rainforest Fringe Festival takes place in Kuching, Sarawak from 7th to 16th July 2017. For more information and the full programme, check out their website here