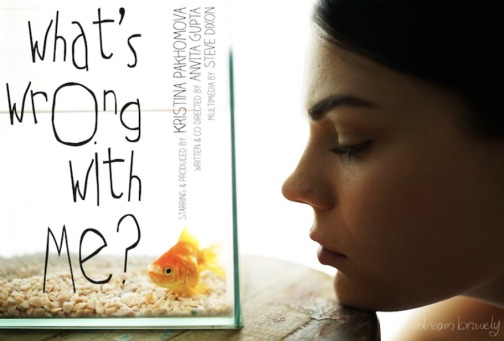 Written by Anvita Gupta and produced and performed by Kristina Pakhomova, What’s Wrong With Me? is a solo comedy piece about a woman named Fey, who is unaware that she has been diagnosed with Asperger’s syndrome, alongside a whole concoction of other symptoms. In this play, Fey invites the audience to find out what exactly is wrong with her as she shares stories from her everyday life and the awkward moments that arise from her interactions with other people.

What immediately stood out from the play’s synopsis was its description – “a comedy on mental illness” – which left me curious about how Pakhomova and Gupta would explore such a sensitive topic via the medium of comedy and reconcile two seemingly incongruous entities.

As the play opens, Fey (Pakhomova) tentatively walks onto the stage. It soon becomes clear that she is in a clinic when the projection screen lights up with pre-recorded footage of a nurse (Elizabeth Gunawan), who tells her to take a seat and wait for the doctor. Fey, however, does the precise opposite of what she has been told; she shuffles around the waiting room nervously, rearranges the display pieces, and even strikes up a conversation with a goldfish she names Bubbles. In speaking to Bubbles, she recounts various unusual incidences that have occurred recently, including an uncomfortable conversation with her husband (Shalen De-Siva) about her friend’s home-made sex toy and “George Washington’s dildo” as well as her neighbour (Steve Dixon), who taxidermied her dead cat.

Pakhomova delivers a compelling performance of Fey and all her behavioural quirks. While the character is seen fidgeting constantly and laughing awkwardly throughout the play, these nervous habits never feel forced nor do they interrupt the flow of her monologue. Additionally, Fey’s obliviousness to social cues and courtesies is carefully handled and adds a delightfully funny touch to the play. Praise must also be given to Gupta’s script, which strikes a delicate balance by creating a humourous yet relatable character without reducing her to a caricature. Gupta’s script also effectively applies witty wordplay (such as a “pussy playing with a toy vagina” and “sleeping soundly but not soundlessly”), injecting comic relief into potentially taboo discussions.

The use of multimedia projection is also an unconventional but effective decision as it allows for the introduction of secondary characters without having them physically appear on stage. This also adds a layer of depth and imbues the play with a more dynamic energy as the audience can watch Fey interact with other characters instead of simply seeing her sit in isolation.

Towards the end of the play, the doctor (Carina McWhinnie) finally arrives and tells Fey that she’d like to hear her story, reassuring her that a “lack of empathy, social skills, and awkwardness describes every human being [she] knows”. These punchlines not only underscore the importance of giving mental health patients a platform to share their story, but also bring the play’s key question of “what is normal?” to the fore.

What’s Wrong With Me has a runtime of only twenty minutes, ending slightly abruptly with Fey leaving the clinic before talking to the doctor, leaving me wanting more. However, during the post-show Q&A, Pakhomova and Gupta explained that they were keen to develop the story further. What’s Wrong With Me? is a promising play with great potential and I am excited to see how it will evolve.

During the Q&A, an audience member with Asperger’s commented that Fey is a “very realistic character” which he could relate to entirely – especially her tendency to arrange things when waiting for the doctor – and thanked Pakhomova and Gupta for portraying the community in a sensitive and light-hearted way. This, for me, was a testament to their success. Ultimately, What’s Wrong With Me? is a short but powerful play which reminds us that people with mental illnesses are human beings too who happen to be suffering, but whose suffering does not define who they are.

Written by Alicia Chong for Bakchormeeboy

What’s Wrong With Me? plays at the Centre 42 Blackbox on 8th and 9th July. Tickets available from Peatix

0 comments on “Review: What’s Wrong With Me by Kristina Pakhomova”