The annual Singapore Night Festival turns TEN this August and with it comes an all new edition that’s bigger and better than ever! Whether you’re completely new to Singapore’s biggest outdoor performing arts festival, or have already forged countless magical memories over the past decade, expect to be dazzled and delighted by the many installations and performance art all around the Bras Basah.Bugis precinct this August, with both the return of previous collaborators and plenty of new works featured.

At a recent media preview prior to its official opening, we were introduced to some of the light installations that visitors could look forward to over the course of the entire festival. This year’s exhibitions were mostly small scale affairs, with plenty of focus on visitor interaction with the installations and crafting their own unique experience at each exhibit.
Error
This video doesn’t exist

Starting off at the very front of the National Museum, visitors can expect to see the biggest and most exhilarating installation of this year’s Night Festival. French artists EZ3kiel have utilized the facade of the National Museum as their very own projection screen to present Convolutions, where carefully mapped projection, laser lights and eclectic music come together to create a gorgeous light show that will warp and transform the National Museum into a site for strange creatures and epic landscapes to form. 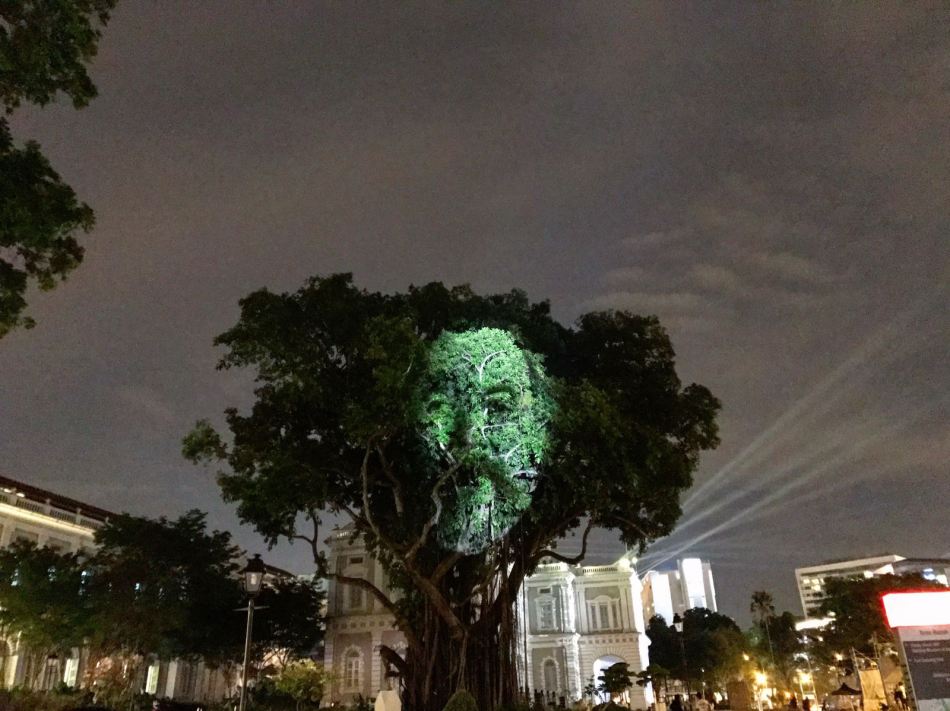 Just beside Convolutions, visitors might notice a strange light aimed at the hundred year old Banyan tree. Position yourself just right, and you’ll be able to see UK artist Karel Bata’s The Tree That Blinked, which features a series of moving portraits (including his own face) projected into the branches of the Banyan tree. First shown at London’s 286 Gallery in 2013, this unique projection mapping piece adds new layers and textures to the faces, a depth that lends a sense of reality and imbues them with life, and the longer you look, the more these portraits morph and meld into the next face, almost as if they were spirits of nature manifesting in reality, attempting to communicate with viewers.

Head into the National Museum, at Gallery 10, and before you even step in, you might already be able to smell the next installation. Titled Nostos: Records of the Self, skin care brand Aesop has created a truly unique exhibit which centres around a unique scent specially created just for the occasion, also nicely coinciding with their own 30th anniversary. Pools of water are heated by incandescent lightbulbs all around the gallery, activating the droplets of essential oils floating in the water. As the oils fill the entire gallery with a soothing aroma, visitors will feel incredibly relaxed as for once, their nose gets a chance to lead them through.

Over at the Singapore Art Museum, visitors might be a little creeped out by the army of eerie mannequins standing guard in front of the entrance. But don’t be afraid, in fact, try getting closer and listen to what they have to say, and if you wish to, start a conversation with them!

These mannequins are in fact part of French artists AADN’s Les Hommes Debout (The Standing Man) and as visitors get close and interact with these mannequins, they will react accordingly, changing colour and showcasing different patterns, coming to life at the sound of your voice.

After that, pop over to the National Design Centre to check out UK artists’ KMA’s Flock. Flock features a short musical excerpt from Tchaikovsky’s famous ballet, Swan Lake. Utilizing light, sound, projection and live motion tracking technology, KMA creates an interactive space where visitors can play with the projections on the floor and see Swan Lake from a completely different point of view – as the ballerina yourself! Speaking to both Kit and Tom from KMA, we found out that Flock actually first premiered in London’s Trafalgar Square way back in 2002, going through multiple changes since then as new technology continued to develop. Guess these guys really were well ahead of their time! 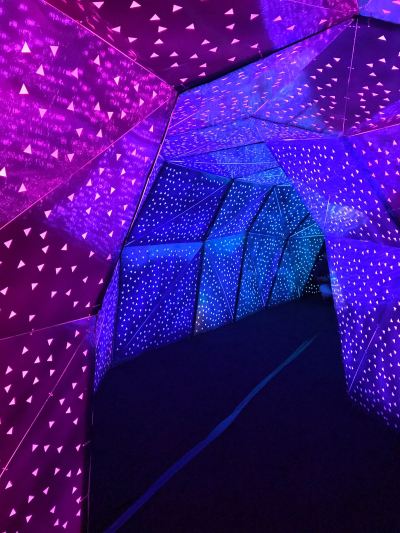 Just behind Flock, also in the National Design Centre, SUTD third year students and art collective Praxis+ have set up a beautiful tunnel of sparkling lights with their work Phosphene. Inspired by the history of the Night Festival, Praxis+ wanted visitors to go on an unexpected journey full of twists, turns and wonder. While the cave walls appear to be made of sheets of metal, they’re actually of a much lighter material, and Praxis+ have cleverly created the illusion that one has stepped into a completely different world upon entering the twinkling cavern.

Besides these works, there’s still plenty more to gawp at and of course, take photos of as you tour the entire precinct, with a surprise on every corner waiting for you during the 10th Singapore Night Festival. We know we’ll be back to revisit these works, and can’t wait for the festival to really go into full swing on Friday so we can experience it in all its glory!

Singapore Night Festival
When: 18th – 26th August, 7.30pm-12am daily.
Where: Bras Basah/Bugis Precinct
For more details and the full lineup of events and exhibitions, check out their website here
Stay tuned for Part 2 of our preview next week when we bring you highlights of both the food market, as well as live performances starting from 24th August!