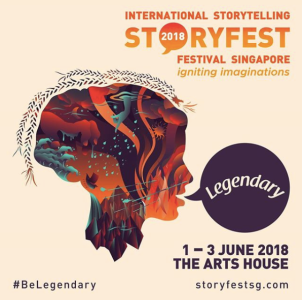 When I think of stories, one of the first things I immediately associate them with is Ovid’s Metamorphoses. Besides being a collection of stories of the Greek gods and goddesses, I also think about the title itself, and how the act of storytelling is one that allows for metamorphosis. Deceptively simple, storytelling requires the storyteller to weave and transform their words, their body, their voice with each story, all eyes and responsibility on them to leave listeners rapt with attention as they hang on to every word. There’s an intricacy and charm storytelling that requires so much skill from the teller to engage fully with audiences at all times, making it a truly unique and demanding art form.

Held at the Arts House last weekend, That power of change was on full display at Storyfest 2018, with local storyteller Kamini Ramachandran at the helm as Creative Producer, co-organised by The Storytelling Centre Limited and The Arts House. Storyfest 2018 has seen overwhelmingly positive response, reporting a 95.8% sold out programme. Barely a couple of weeks after acting as the Festival House for the Singapore International Festival of the Arts, the Arts House once again underwent a mini-makeover over the weekend as it became a bastion of stories, imbued with an invisible energy that seethed through its very walls with stories in both the minds and mouths of all who entered.

As one approached the building, there was already the sense that the space was different. Parked on the front lawn was Big Tiny’s Story House, the miniature mobile house having turned into a playground for children to gather, arms raised and completely engaged as they listened to tales of talking animals and legendary heroes. Set up right beside it was mslatenightjam’s Story Cloth, initially a monochrome tapestry, but awash in paint by Sunday, depicting the characters and themes that lived in the stories told across the weekend, an instrument that now had the potential to immediately transport listeners visually to these distant lands upon seeing it.

Enter the building and you’ll sense an unmistakable crackle excitement in the air as storytellers both local and international prepared for full scale performances in the Blue Room and Play Den. As a tradition as old as history itself, storytelling has had plenty of time over the years to grow, develop and branch out into alternate forms, clearly seen in the Be Legendary Singapore Showcase on Saturday with multiple storytelling organisations showing the evolution of storytelling from improv to dramatic monologues.

Even more impressive perhaps, were the young storytellers featured in A Caravan of Stories on Sunday. Each of the five storytellers impressed with their skill despite their youth. A Caravan of Stories opened on a strong note with Jeremy Leong’s tale of The Honest Man as he took on the persona of a palace servant witnessing the events unfold firsthand. Weaving in and out of the audience as he traipsed, exasperated, between ‘palace’ to ‘marketplace’ at the King’s behest, Jeremy effectively engaged the audience with his antics and annoyance at his tasks.

But of the five, the biggest revelation of all was Daisy Mitchell, a cut above the rest as she told the Persian story of The Magic Horse. Displaying high energy while effortlessly wielding a foldable fan, Daisy left us constantly on the edge of our seats as she shifted seamlessly from one character to another, and had us anticipating and savouring every chance we got to participate, leaving us wanting when she ended on a cliffhanger. To see the tradition live on so strongly in these young performers and their sheer enthusiasm as they each brought us to this land of greedy sultans and cunning commoners gives us hope that these stories will find a way to continue being told and heard in the years still to come, for generations after.

Beyond these afternoon activities, the highlight of Storyfest would be the three international storytelling acts invited to perform each night. Each performer is a master of the craft in their own right, and to witness them in action is both a joy and privilege. Storyfest’s adult performances began with Jesper la Cour Andersen and Troels Kirk Ejsing of Denmark’s The Telling Theatre taking audiences on a journey as they told the Nordic legend of Beowulf. Equipped only with their bodies and a strange wind instrument cobbled from a watering can, both Andersen and Ejsing’s voices and music filled the Play Den with an almost palpable vision of the heroic Beowulf’s epic battle against the monstrous Grendel and its mother. Emotions ran high as we felt every swing of his sword, every wound inflicted in our mind’s eye as both tellers immersed us completely in this ancient world, and was a perfect example of a legend told in the best way possible.

On the second night, Nairobi-based Maimouna Jallow adapted Lola Shoneyin’s The Secret Lives of Baba Segi’s Wives for performance, telling a tale of modern Africa equal parts laugh out loud funny and devastatingly tragic, as the best stories are. There is a natural charm to Maimouna that extends to the characters she depicts onstage. A simple set giving the impression of an African household was all she needed to begin this story of a chauvinist man attempting to unravel the mystery of his fourth wife’s infertility. What is perhaps most surprising of all is how the initial framing story opens itself up like a puzzle box, a type of Arabian Nights that sees Maimouna literally invoking the spirit of each of the four wives in turn. Maimouna differentiates between them simply with her physicality and her voice, each one unforgettable and lovable in their own way. When Maimouna describes the first time one of the wives experiences an orgasm, she performs with her entire body, her voice aching with pleasure and satisfaction. There is wit, there is humour and there is so much pain in this treasure trove of tales as Maimouna glides from one life to another, showcasing the ongoing gender inequality and prejudices that still exist in Africa today through a heartbreaking and fiercely relevant modern tale.

And finally, ending off Storyfest on Sunday night was a performance by storyteller Mara Menzies. Taking inspiration from her life and history in both Kenya and Scotland, Mara told three stories originating from both countries, harking back to a much more traditional form and structure of performance. As diverse as the tale of The Changeling was from the Kikuyu tale of The Woman who wanted to Eat Meat, Mara expertly handled both stories, mischievously chiding audiences along the way as she brought them onstage to play various characters while adapting her tone and body language to suit the differing moods (one feels pure joy emanating forth as she depicts protagonist Washu tasting meat for the very first time).

Mara’s final story began with a framing device that encapsulated everything storytelling aspires to be, a lesson on how stories possess some kind of magic, appearing when they are needed most. This was the ‘lost story’ of Ochosi of the Orisha, the African pantheon of gods, framed as a story within a story as it gives a slave girl strength, wisdom and hope as she ran away. Above all then, perhaps the biggest example of metamorphoses of all was not from the storytellers’ performances, but the audiences themselves as their imaginations were ignited with every tale, themselves transformed from within. Mara took the opportunity to leave us with a message that extended to every event that had happened over the weekend: to listen, listen some more, and then take on that role of storyteller, and pass these stories on, never knowing when they could be the key to saving a life.

Attending the various events, despite seeing plenty of familiar faces each day, it was a welcome sight to see multiple new audience members at every performance as well from every age, race, and background, from friends coming to offer support and votes of confidence, to curious adults attending on a whim, their own eyes widening as they surprised themselves with how much they enjoyed each performance. For those who were witnessing storytelling for the very first time, doubtless they made a silent vow to themselves to come back again and make a full weekend of when Storyfest next returns, allowing them to once again enter this incredible, inimitable world of endless wonder and transformation that the spoken word and oral tradition unlocks in us all.

Storyfest 2018 took place at the Arts House from 1st – 3rd June. For more information and to keep up with The Storytelling Centre’s activities, visit their website here

0 comments on “Storyfest 2018: A Treasury of Transformative Tales”