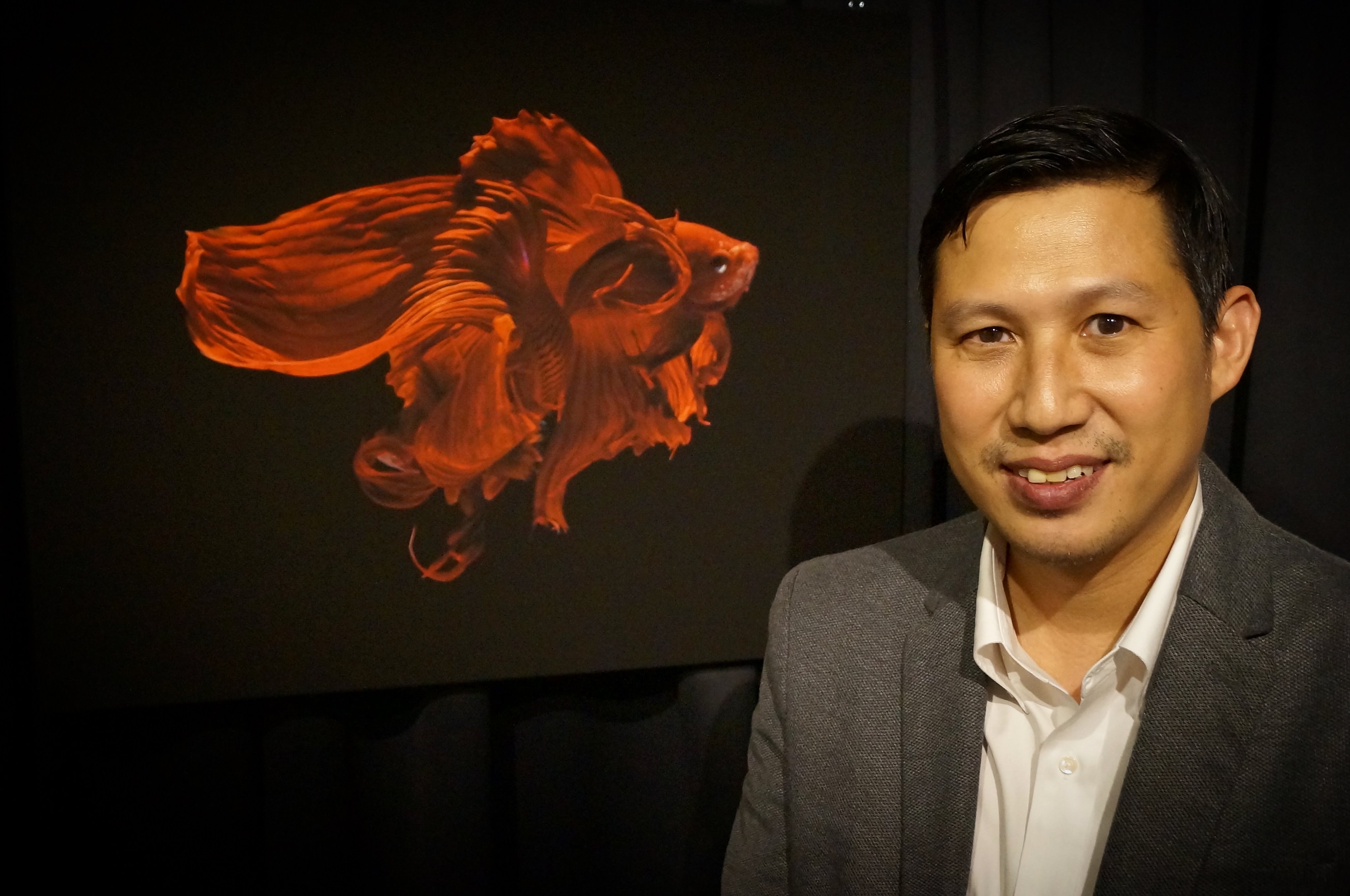 If you didn’t know any better, the subjects in Thai photographer Visarute Angkatavanich’s exhibition at the Sun Yat Sen Nanyang Memorial Hall may appear completely enigmatic. It can be difficult to tell what exactly these glorious, silk-like creatures are in these photographs, as they dance gracefully in the light, taking on watery shapes that bend and fold to become anything from flowers to fashion. But as it turns out, these are in fact, “bettas” or fighting fish.

Beauty of Bettas marks Angkatavanich’s first solo exhibition in Singapore, and opened last weekend in conjunction with the Sun Yat Sen Nanyang Memorial Hall’s Dragonboat Festival celebrations, in line with a number of other fish-themed activities and displays. By day a commercial photographer, Visarute began shooting bettas and other fish around seven years ago, when he became enamoured with their spectrum of colours and the way their tails swished and flicked in the water. 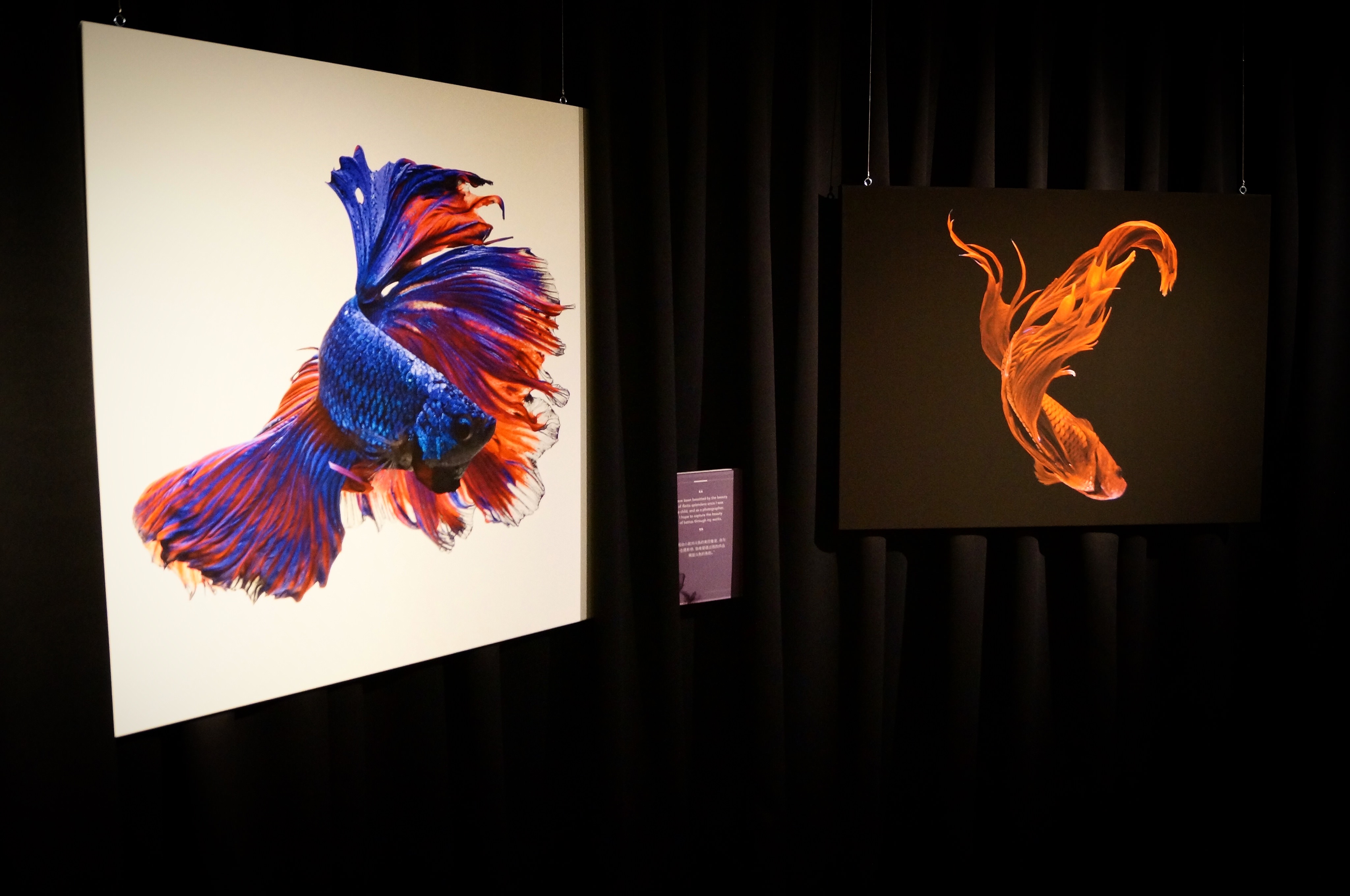 But even before that, Visarute has always had a keen relationship with fish in his childhood. Says the Bangkok based photographer: “Growing up, we weren’t allowed to have cats or dogs, so instead, my parents gave me fish as pets. I’ve always felt a connection to these fish, and growing up, I continued to enjoy going to the aquarium, going scuba diving, or even just seeing fish at the market.” 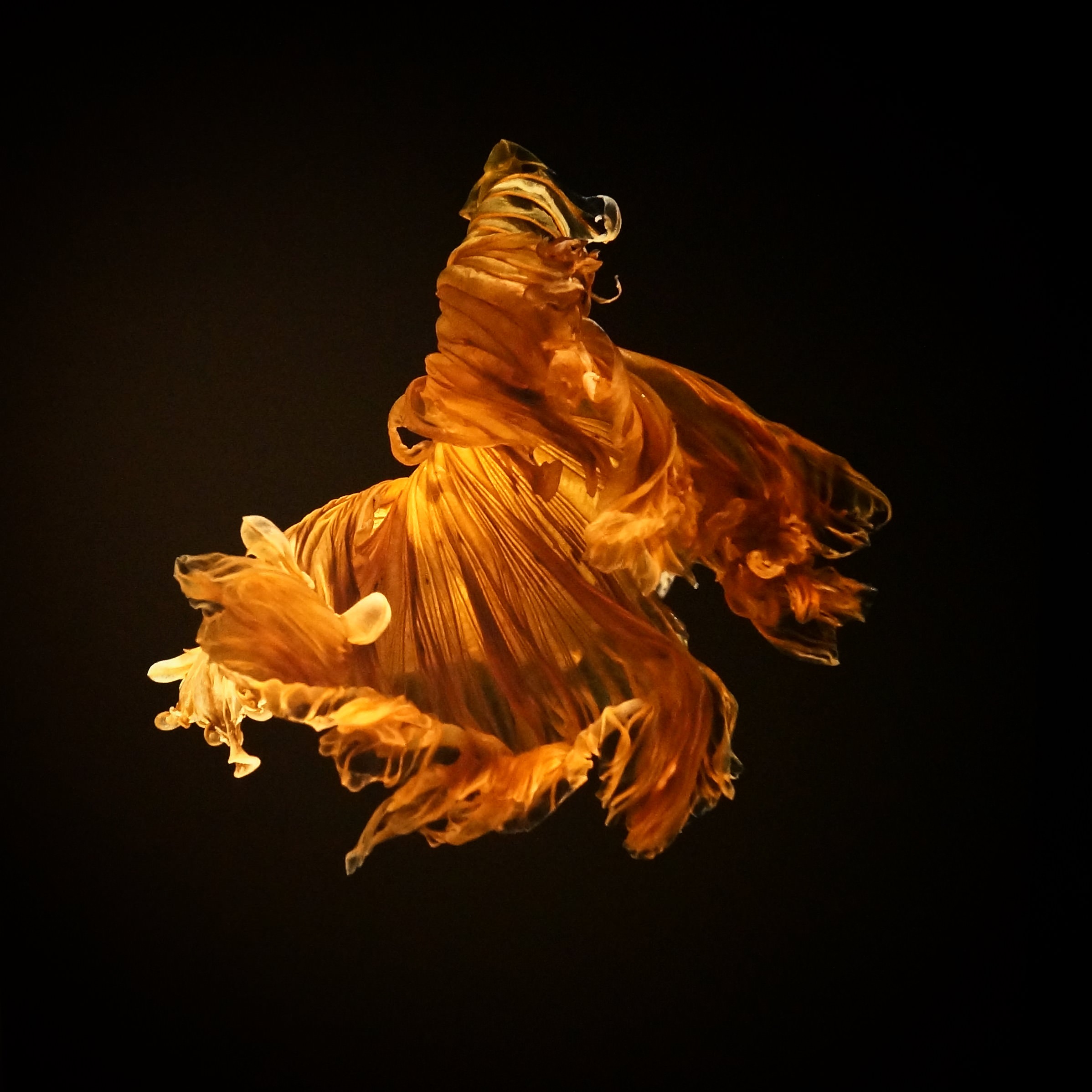 Singapore itself has a strong history with the bettas, considered exotic fish and continually imported and exported internationally. For many growing up in previous generations, “fish fighting” was also a common past-time, fishing them out from longkangs and rivers to compete with other fish. Says Visarute: “I don’t necessarily choose the high-grade, ‘beautiful’ fish. Only about 5-10% of the 200 or so hatchlings from each batch are considered ‘beautiful’, so what I find are those with potential to be photogenic, and their energy in possibly posing well for you.” 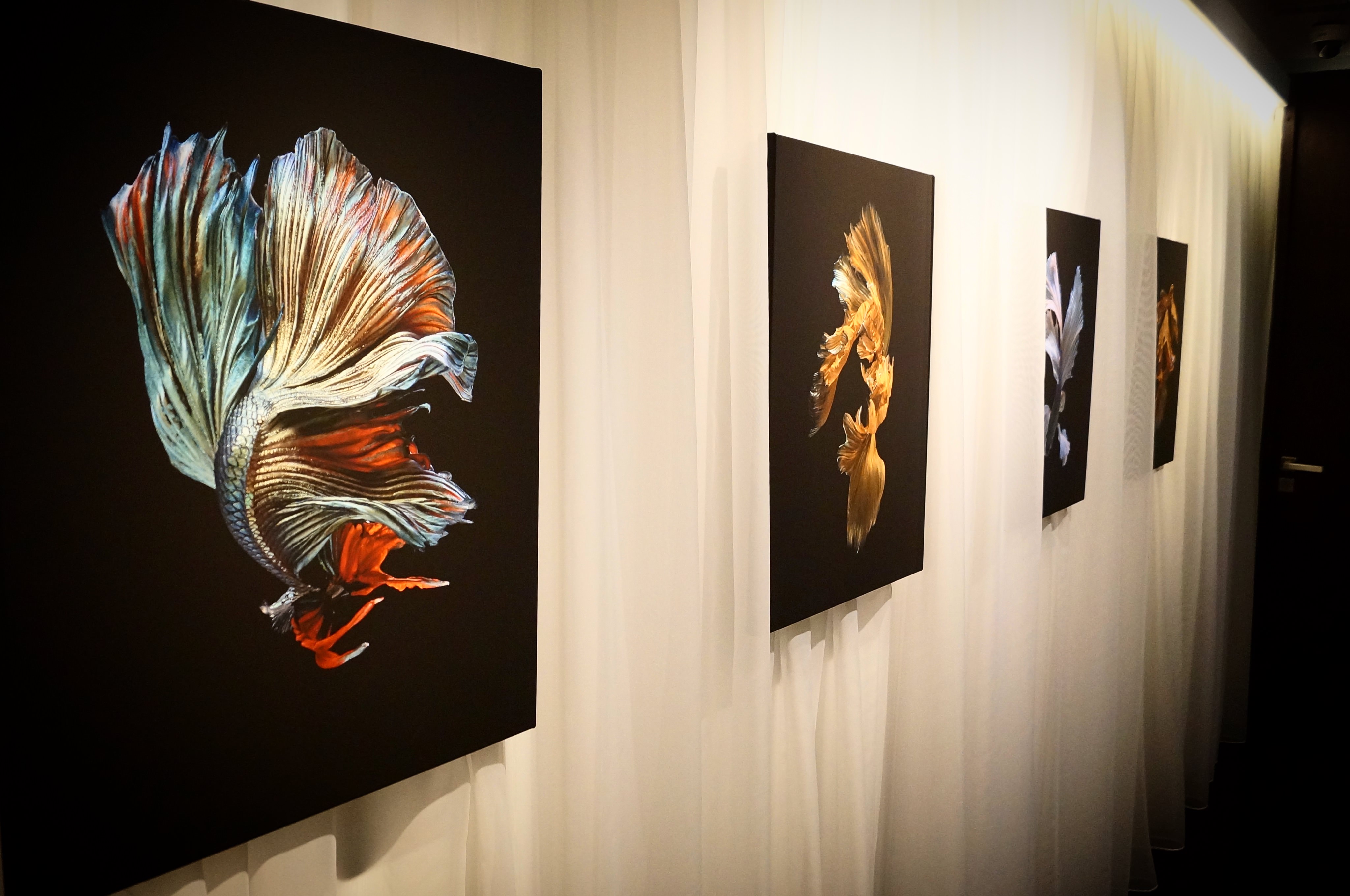 All of Visarute’s fish are found from pet shops in Thailand, and has up to 30 or 40 fish at a time in his care at his condominium. Says Visarute: “Most people shoot fish for sale to collectors and competitors, so they take note of the details such as capturing the full length of the tail or fin. But for me, I wanted to be a bit more abstract, and have people use their imagination to interpret these creatures, capturing their mystery and beauty in their dynamic movements to tell a unique story.” 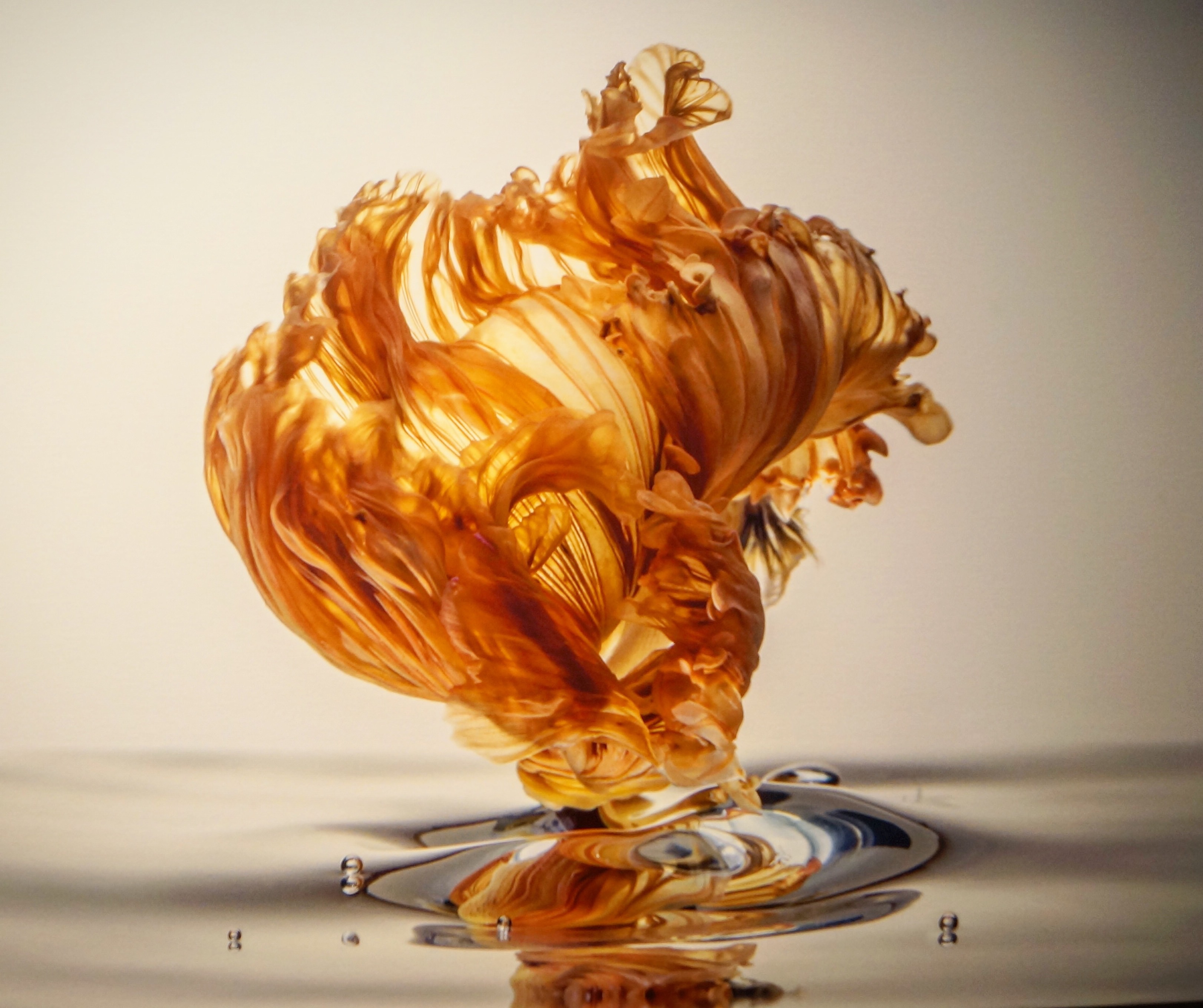 The photos are crystal clear, and most of the time, the fish appear to be suspended in midair, an alien presence in a black or white void revelling in their intricate beauty for all to see. Says Visarute, who uses a Nikon D850: “It’s actually very simple – I use a clear glass, and filtered water with no visible particles. After that, it’s a matter of waiting to capture the right pose. You can’t just order fish around, and when working with them, you need to spend time talking to them and playing the right music for them. A shot can take up to 4-5 hours to capture.”

When asked how he might continue to develop his craft in future, Visarute concludes: “Of all the fish I’ve taken photos of, I’ve never really tried to capture Japanese koi. I might try to do that in future!”

0 comments on “Beauty of Bettas: An Interview with Photographer Visarute Angkatavanich”