For years now, Base Entertainment Asia has been known for working closely with the Sands Theatre at Marina Bay Sands, bringing in some of the world’s biggest musicals and shows to Singapore throughout the year, from The Lion King to Mamma Mia!, to even Crazy Horse Paris and Mandarin musical The Secret. But with plenty of audiences in the world still unable to get a chance to catch these amazing shows, Base Entertainment Asia is taking things one step further, expanding their reach to the region and bringing these productions to developing markets.

Considering it’s been over 20 years since a musical of this scale has toured to Malaysia, for Base Entertainment Asia to bring in Andrew Lloyd Webber’s The Phantom of the Opera to Kuala Lumpure is nothing short of phenomenal, and as we travelled up to see it staged at the Istana Budaya, we caught up with Base Entertainment Asia CEO Chantal Prudhomme, and found out a little more about her time at Base, her plans for the company, and her love for theatre.

A veteran of the entertainment industry with over 25 years experience under her belt, Chantal had humble beginnings as a producer, with her own independent production company called Prudhomme Productions. Specialising in talent management, live broadcasts, concerts, music videos and special events, Chantal eventually moved on in the early 2000s, working for Endemol Asia, a global content creator, producer and distributor of reality television programs, as the executive producer responsible for the localisation of reality shows such as Fear Factor, Big Brother and Wipeout.

From there, Chantal took on a key opportunity that would bring her to MTV Japan in 2004, before coming to Singapore 2 years later, developing programming, creative and content, marketing and sales for MTV Asia, working on projects such as the MTV Asia Awards, Japan Awards, Australia and India Awards. Joining the Base team in 2011 as Head of Operations, she eventually received her promotion in 2015 to CEO, where she continues to head the company. 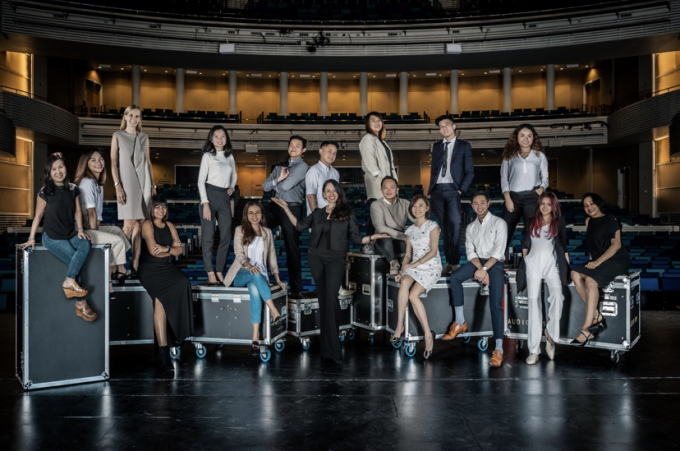 Says Chantal: “I work with such an amazing team, and we’ve got all these great big plans ahead of us to expand and keep improving the Asian entertainment scene. We want to offer Asia the same level of content and quality you find on West End and Broadway. People shouldn’t have to travel halfway across the world to see great shows, and we’re already planning our 2020 and 2021 seasons as we talk to IP owners around the world and figure out what’s available to us.”

She adds: “Every show we do is so different, and selecting which shows to bring in is sort of like a jigsaw puzzle in terms of scheduling. My goal is to bring in three good musicals a year, and because of touring schedules and availability, we have to plan in a way that they don’t clash, and still make sure they fit into time periods that are optimum. Once you have these three productions to anchor the programme for the year, we then plan the smaller shows with shorter runs to put in between these shows.”

On why the decision to bring Phantom to Malaysia, Chantal explains”We thought about how musicals always go to the same markets, and of all these places, they haven’t been coming to Malaysia, and other emerging markets. Besides bringing in shows, we do have a long term vision of improving Asia as a must visit destination, and with Malaysia as our neighbour, from a logistics point of view, it’s easy to just truck Phantom over, as opposed to packing everything into a crate and shipping it via sea for a month. It helps that this is a market that seems very keen on developing further, and that it’s been such a big wish for the Istana Budaya to do Phantom for such a long time. And while it’s been a desire for over 20 years, we were already in the talks to bring it in some years ago. With some modifications to the theatre, it’s finally happening, and now everything is coming together to make it all work. All of this helps make Base as a company stronger as we extend our reach and scope, and become known as a company that brings excellent content to the entire region.”

On the philosophy behind Base, Chantal explains: “When you think about it, theatre has been around forever, and people need entertainment to forget about their everyday troubles, and be amazed by beautiful music and beautiful performances. For 2 hours, you can escape, feel happy, and want to come back for more. And in my line of work, I’m always keeping my eyes and ears open for the next show to bring in. I travel a lot just to watch as much as I can, and I will never bring in a show I haven’t already seen. I’m also aware of how the needs of Singapore ar every different from let’s say, New York. I still remain very brand-oriented, and try to focus on family-friendly shows with good reputations that people would immediately recognize, as sure bets. And even then, I still need the help of my team to discuss and figure out if my perception may be limited, so they can give me their perspective and filter the best shows to select, review and book for the theatre.”

She adds: “It’s still all about diversity, and there are certain to be people who like musicals, and people who might prefer circus or magic. We want to give audiences a little bit of everything, so Base is constantly diversifying our offerings to avoid fatigue. We also hope that people might be encouraged to try different things in our lineup, and develop an appreciation for other art forms apart from those that they already are comfortable with, because essentially, we’re producing amazing entertainment, plain and simple.”

“Certainly, we’ve received our fair share of criticism,” she continues. “And I always listen to feedback to help me decide on the next show to bring in. But at the end of the day, there’s a reason why some of the biggest entertainers in the world are still as big as they are today, and it’s because they’re recognised globally as good. Take U2 for example, and how their tickets for their upcoming concert in Singapore have been selling so well. They always give their best, and audiences know them for good, top notch quality shows. We always want to remain attentive to audiences, and deliver what people want.”

As to why she does what she does, Chantal smiles and says: “What keeps me going each day, plain and simple, is passion. I get up every morning excited to come to work, and yes, it’s hard work, but you have to love this job. I always believe in how you should choose to do something in life you’re really passionate about, and considering how much time we spend at work, it has to be exciting for me. And for shows like Phantom, even though I’ve seen it so many times, to me, it’s really all about the people and the audience who are watching it, and seeing how much they enjoy it, that in itself still gives me goosebumps about the power of a great show.”

She concludes: “The most important thing I want to leave behind as my legacy is a blueprint that people of Asia, of Singapore, can use to grow their own scene, and to believe in how the content of touring shows can and does match the quality of that on West End and Broadway with each production.”

For more information about Base Entertainment Asia, visit their website here

The Phantom of the Opera plays from 15th June to 7th July 2019 at the Istana Budaya, Kuala Lumpur. Tickets available here

0 comments on “An Interview with Chantal Prudhomme, CEO of Base Entertainment Asia”