Musical perfection is hard to argue against.

As one of the world’s most famous musicals, Andrew Lloyd Webber’s The Phantom of the Opera needs little to no introduction for anyone with even a little knowledge of musical theatre. From the West End to Broadway, to numerous international tours all around the world, The Phantom of the Opera has stunned and enchanted an infinitum of audience members across the last 32 years with its unforgettable scenic design, snatches of theatre magic that continue to impress, and flawed, timeless characters whose arcs and development resonate even today, a black mirror to society animated by Webber’s darkly orchestrated score featuring some of musical theatre’s best songs of all time. 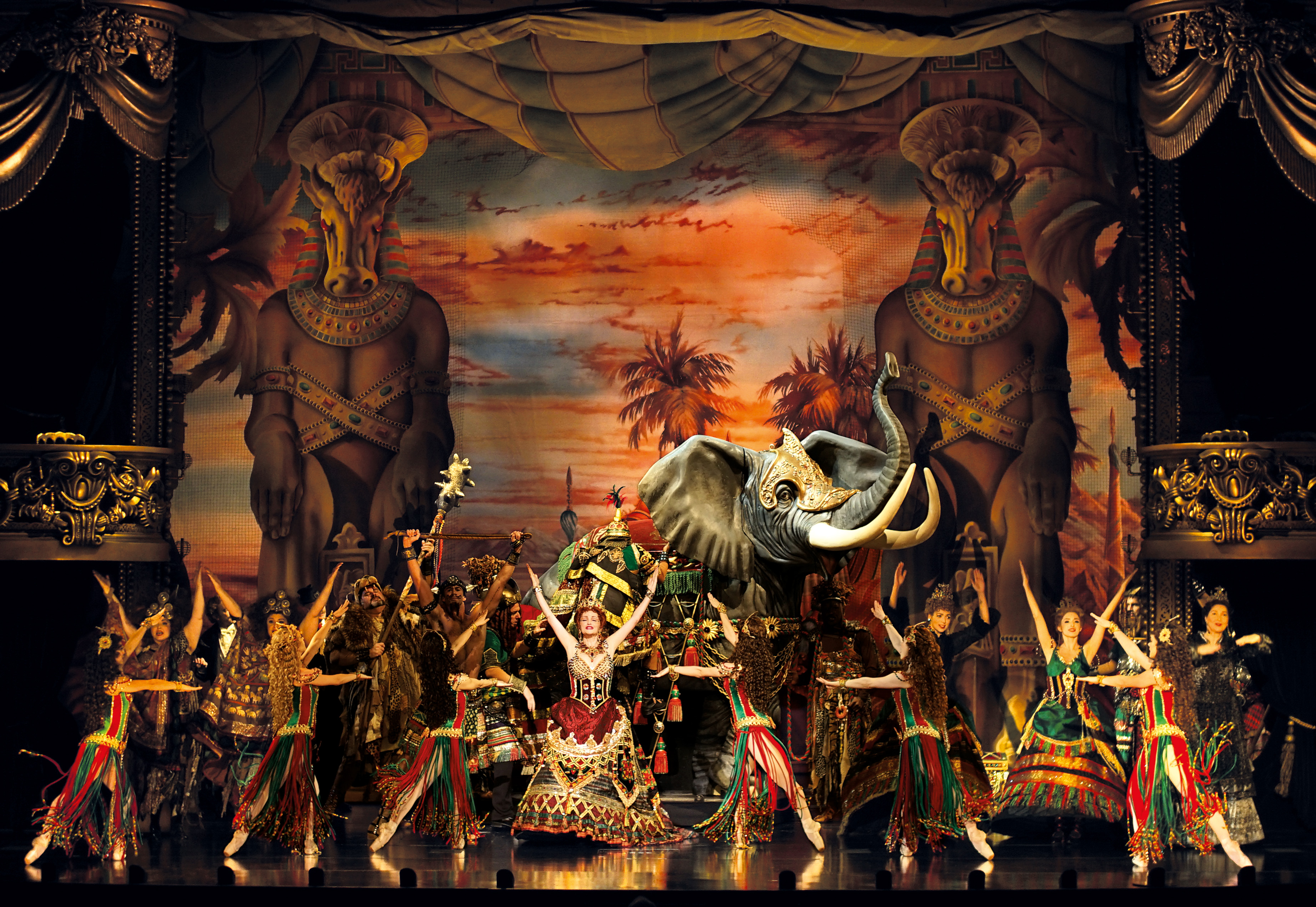 Suffice to say, it’s close to musical perfection, and leaves a legacy and tall order for any future production to live up to, ever since its 1986 debut with musical legends Michael Crawford and Sarah Brightman as the Phantom and Christine respectively. In this new international tour of the show, Jonathan Roxmouth stars as the eponymous Phantom (returning to Singapore since his last appearance as Che in Evita), opposite Meghan Picerno as Christine (whose audition panel for the role included Andrew Lloyd Webber himself), with Matt Leisy completing the trinity as the Phantom’s romantic rival Raoul. 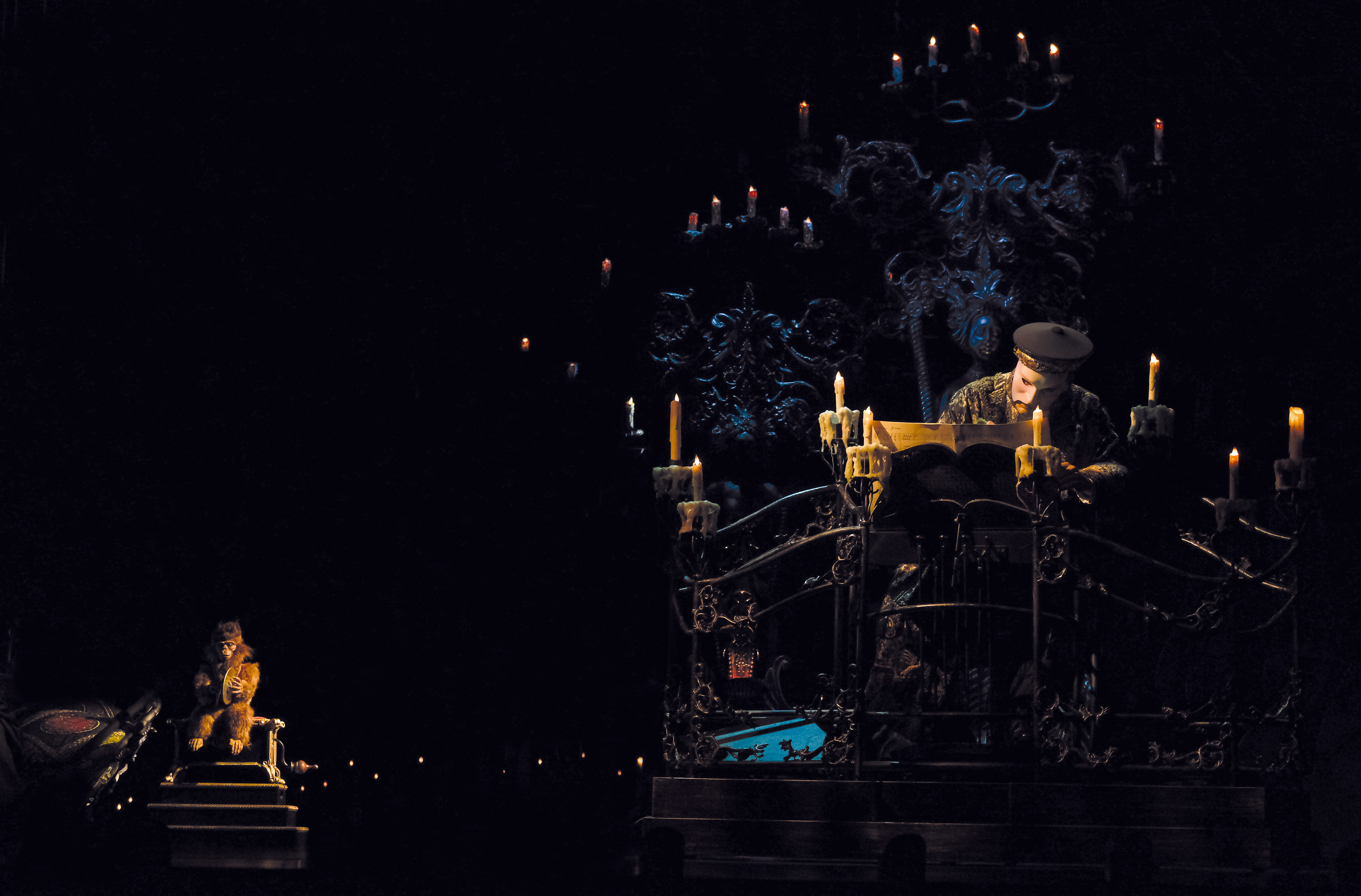 The Phantom of the Opera has long been regarded as a triumph of theatre, particularly for its inconceivably sleek stage and set design. At the Sands Theatre, one feels transported directly to the Paris Opera House itself with an opulent proscenium arch overlain over the stage, with gilded gold angels and a precariously hanging chandelier lifted on high. Scenic, painted backdrops and heavy stage curtains hang down from the ceiling to fill the space with their magnificence, the fly bars all programmed perfectly to transition between scenes without a hitch, alongside gigantic set pieces from a towering staircase to a massive golden statue only add to the grandeur of the production. It takes an army backstage to make sure that the show runs smoothly, from quick changes to managing the countless costumes, paying attention to all the details, from every tiny prop to every massive set piece to make sure it all runs seamlessly, regular as clockwork. Couple that with the stage lighting, and one gets the impression of an actual play-within-a-play happening onstage during the various opera scenes. 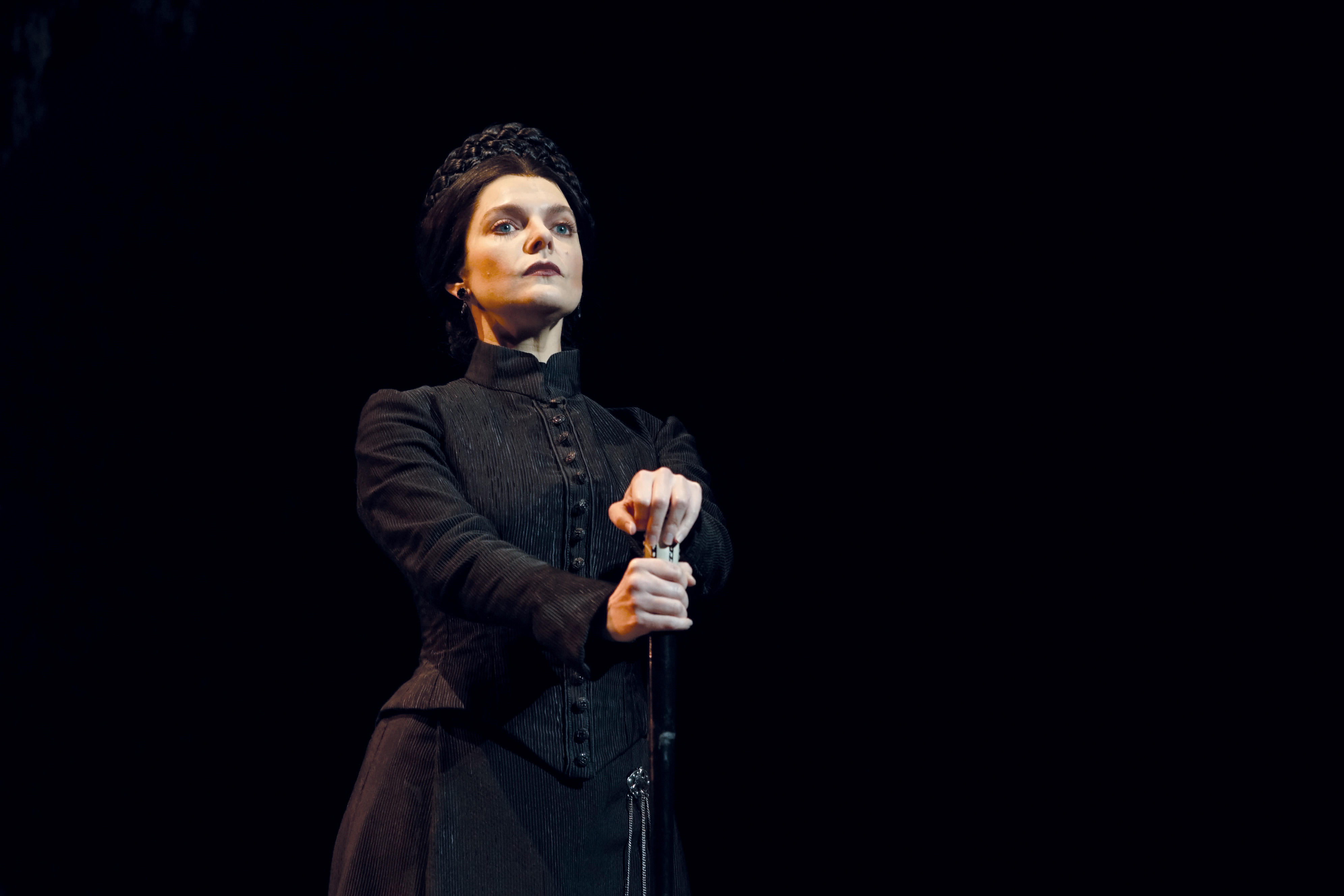 Meanwhile the dark descent into the Phantom’s lair midway through Act 1 remains a delight, no matter how many times one has seen the show (scored to the show’s breathtakingly epic title song). The mechanics remain brilliant as always, seamlessly transforming the opera house into a pitch black dungeon lit by ‘candlelight’, fully bringing out the creepy, Gothic elements of the show. Kudos also to musical director David Andrew Rogers for making the orchestra soar with their live rendition of the score, a constant presence in this almost sung-through musical. Act 2 opened to much fanfare and marvel with’Masquerade’, with a full-sized staircase onstage as performers dressed in colourful, show stopping costumes and masques descended with grace, thanks to resident choreographer Jee Hyun Noh’s direction. 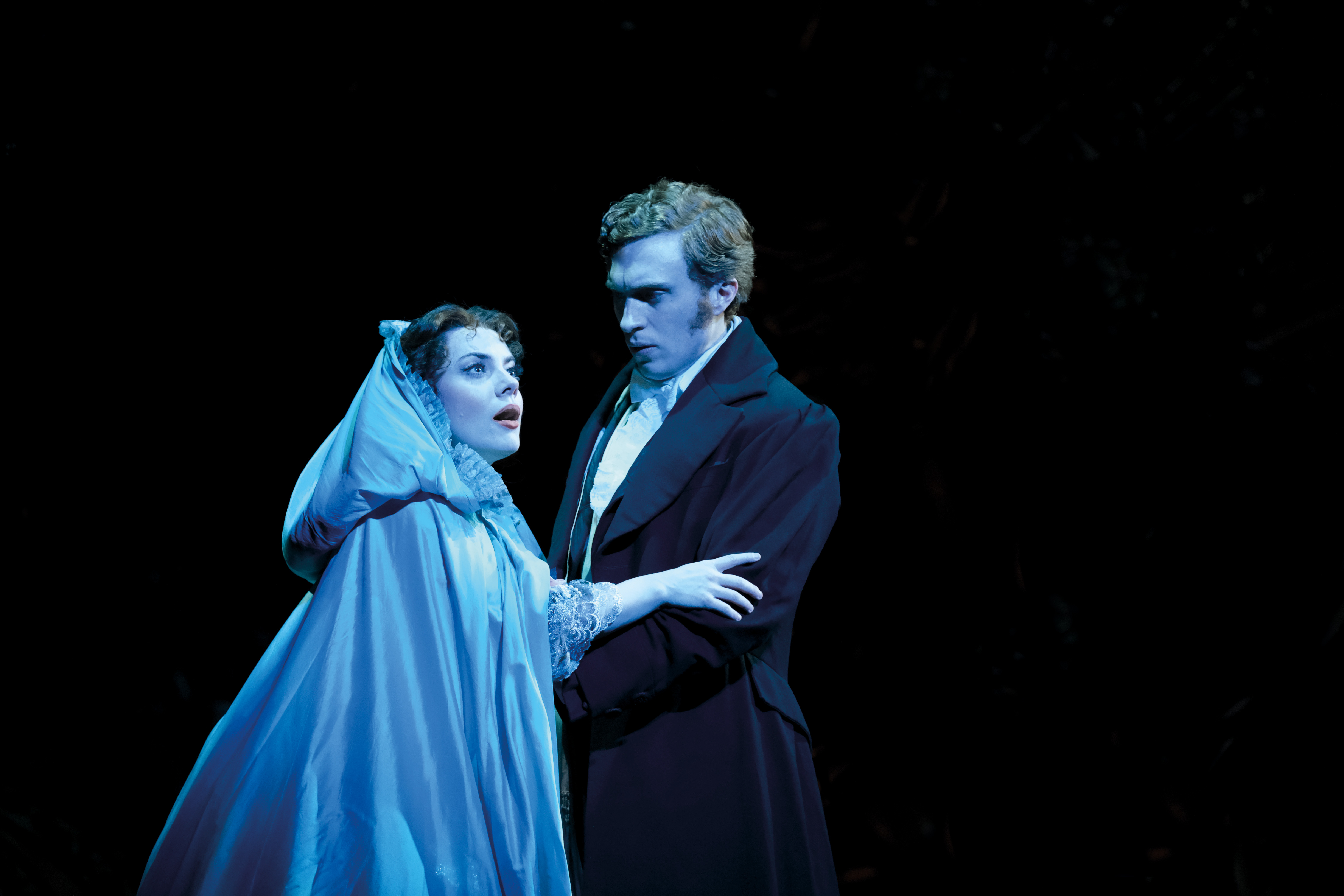 This production of The Phantom of the Opera is also buoyed by capable performers, with James Borthwick and Curt Olds providing comic relief as theatre managers Monsieur Firmin and Monsieur Andre respectively, while Beverly Chiat nimbly steals each of her scenes as diva Carlotta and her larger than life personality. But when it comes down to it, the success of The Phantom of the Opera ultimately hinges on the performances of the three primary cast members and the believability of their tangled love triangle. Each of the actors are skilled in their own right, with Meghan Picerno by far the strongest singer of the three, her opera training clearly coming across in challenging numbers such as “Think of Me”. Between the three protagonists, it’s not hard at all to root for her throughout based on her strength of will alone, her ingenue character a foil to a ferocious courage beneath, and one Picerno embodies well, playing he role with gusto. 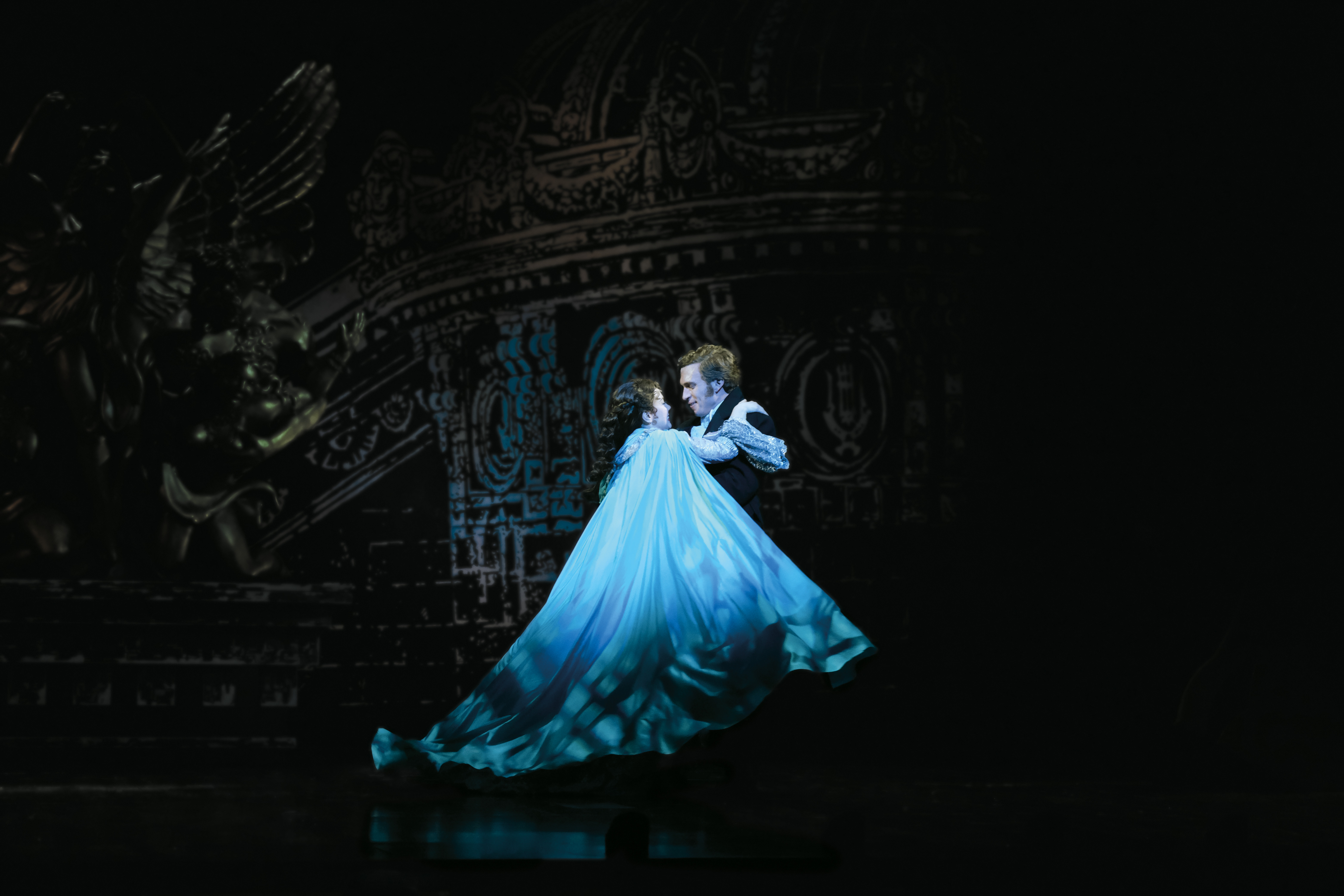 For Matt Leisy, his performance as Raoul results in what is a believable romance between himself and Christine, coming to fruition in Act 1 closing number “All I Ask of You”. But of course, it is Jonathan Roxmouth as the Phantom who has the most expectations thrust upon him, as a self-admitted ‘custodian’ of the musical’s legacy. Having played the iconic role prior to this production, Roxmouth is no stranger to the role, and in fact, holds the entire musical in the highest regard, taking the responsibility upon himself to deliver the best performance he can to this current generation of audience members, as his forebears have done prior to him. 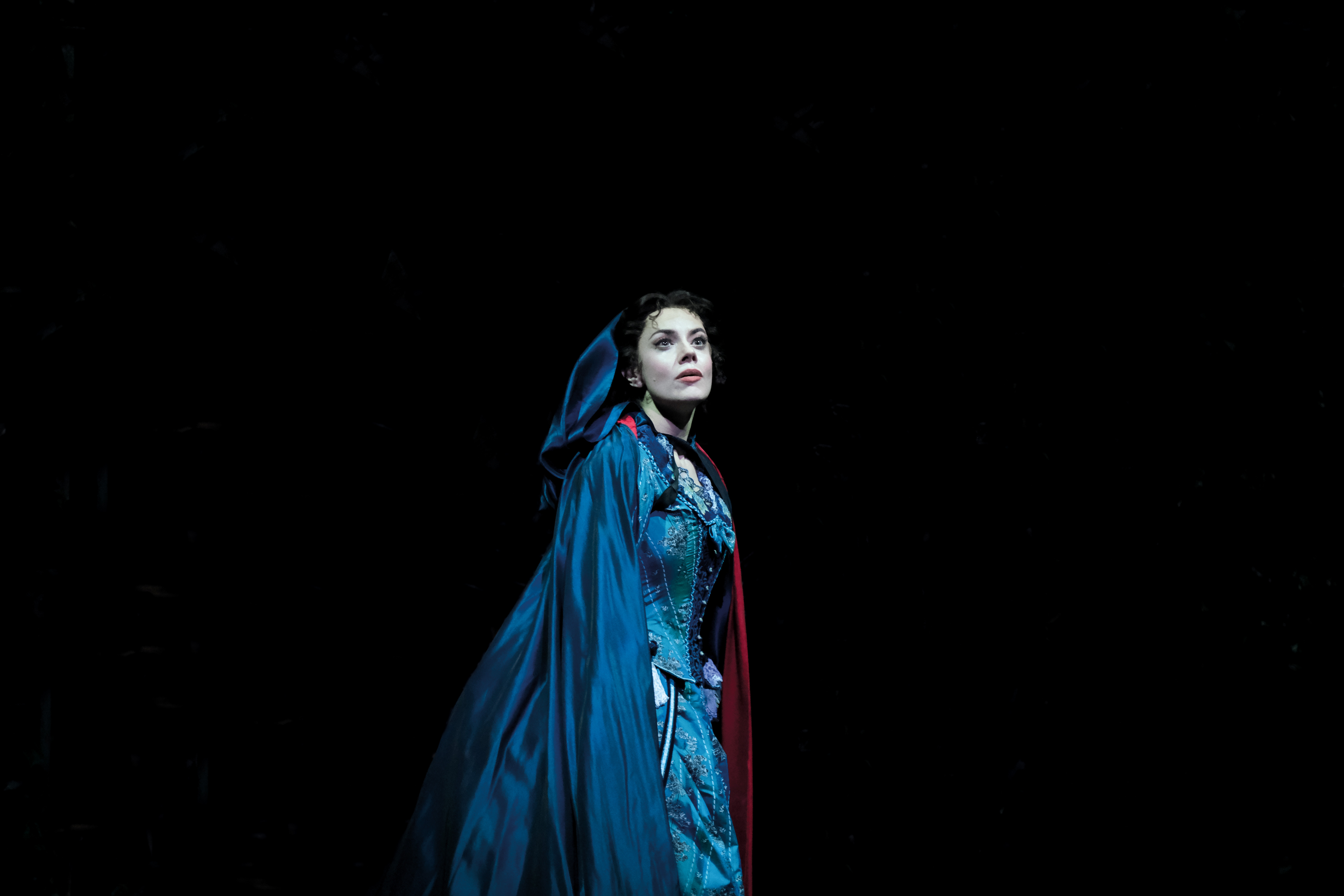 In an interview with Roxmouth we have during the media call prior to the show, we find out that Roxmouth feels extremely strongly for his role, even calling into question previous actors who’ve attempted to put their own spin on the role, defending the ‘foolproof show’ that it doesn’t need any help or deliberate reinterpretations on actors’ parts. Says Roxmouth: “The Phantom is such a multi-layered character, and I’m confident because I know this musical inside out, as one of its biggest fans. It’s part of the tapestry of my family, and it means so much to me, and when I hear the chandelier lift after the prologue, I let the show tell me what to do, where to go, and everything just happens naturally from there.” 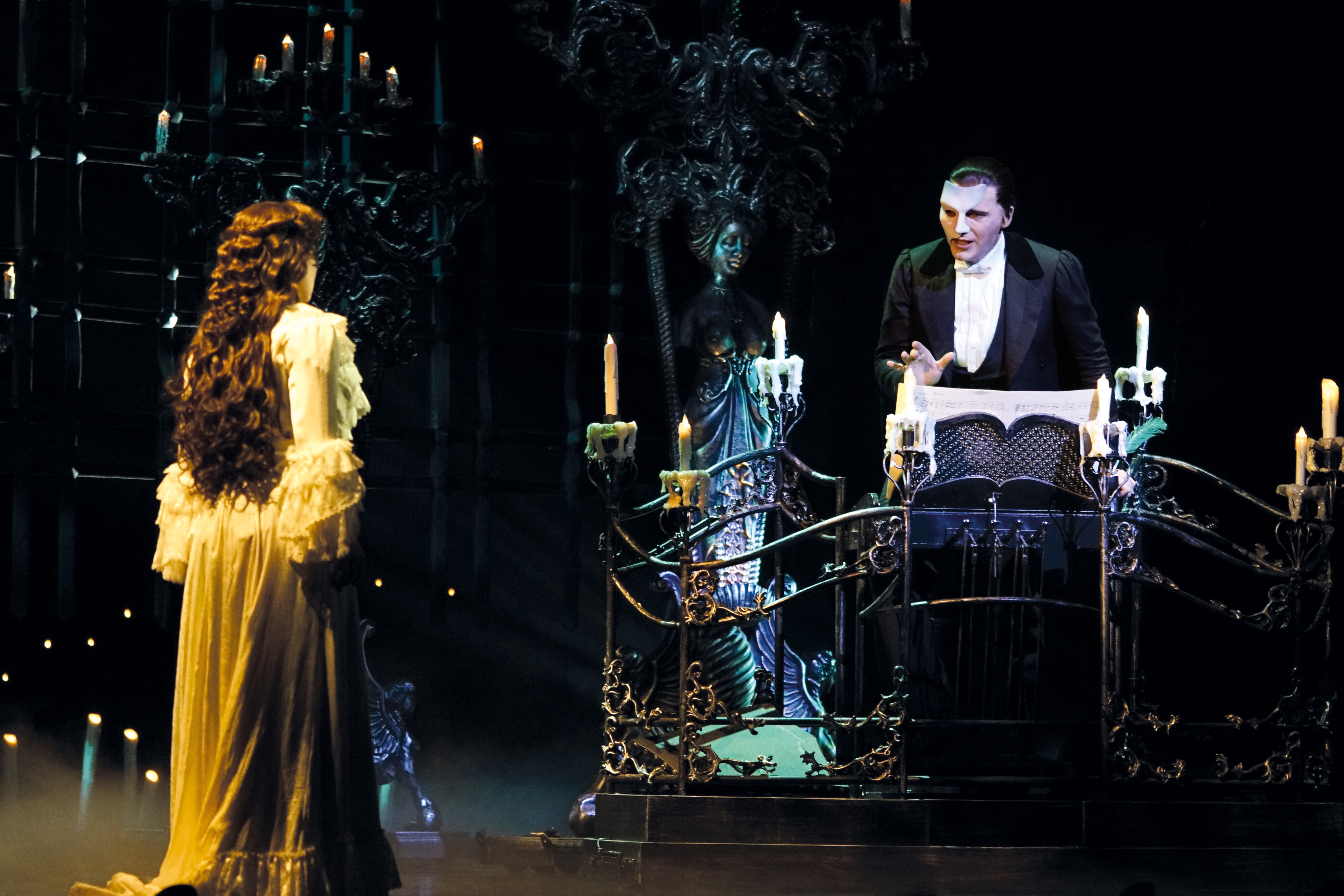 Roxmouth’s performance itself is deep enough that it brings forth a beautiful darkness when he sings, particularly with the Phantom’s solo number “Music of the Night”, where we cannot help but be charmed by his mastery of music, and his enigmatic identity all the more intriguing. There are times this gives way to something far more pure and innocent, bereft of the darkness the lyrics otherwise implies, and it is these tiny rays of light that allow us to see both sides of this outcast of society. A creature of duality, both threatening with his madness and desirous with lust for Christine, the final moment between he and Christine in “The Point of No Return” feels genuine as she allows herself to see past his imperfections and physicality to allow him an ounce of love, a lingering, emotional pain hanging in the air as he is left alone in his own darkness before the show draws to a close. 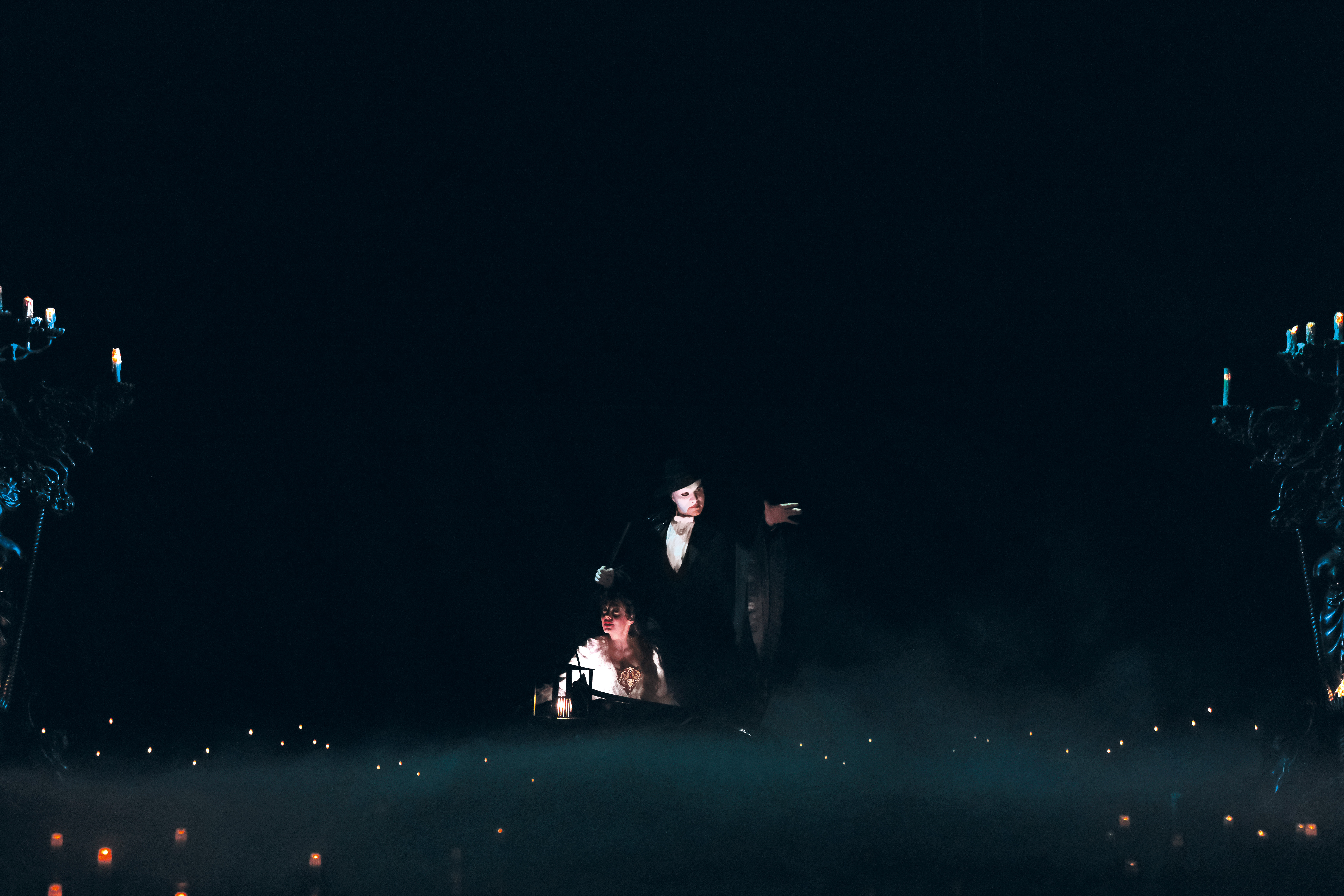 As Roxmouth puts it, the musical is not a matter of whether the Phantom is a hero or villain, but clear that he is a victim of societal prejudice, and all it takes is a moment of human kindness and bonding for him to realise that not all is lost, oddly relevant in today’s time where discrimination and hate continues to run rampant across the world. Says Roxmouth: “Regardless of language, culture or background, The Phantom of the Opera is a show that speaks to everyone on a human level, and every show gets the same response, the only one I’ve been in that’s done so.” 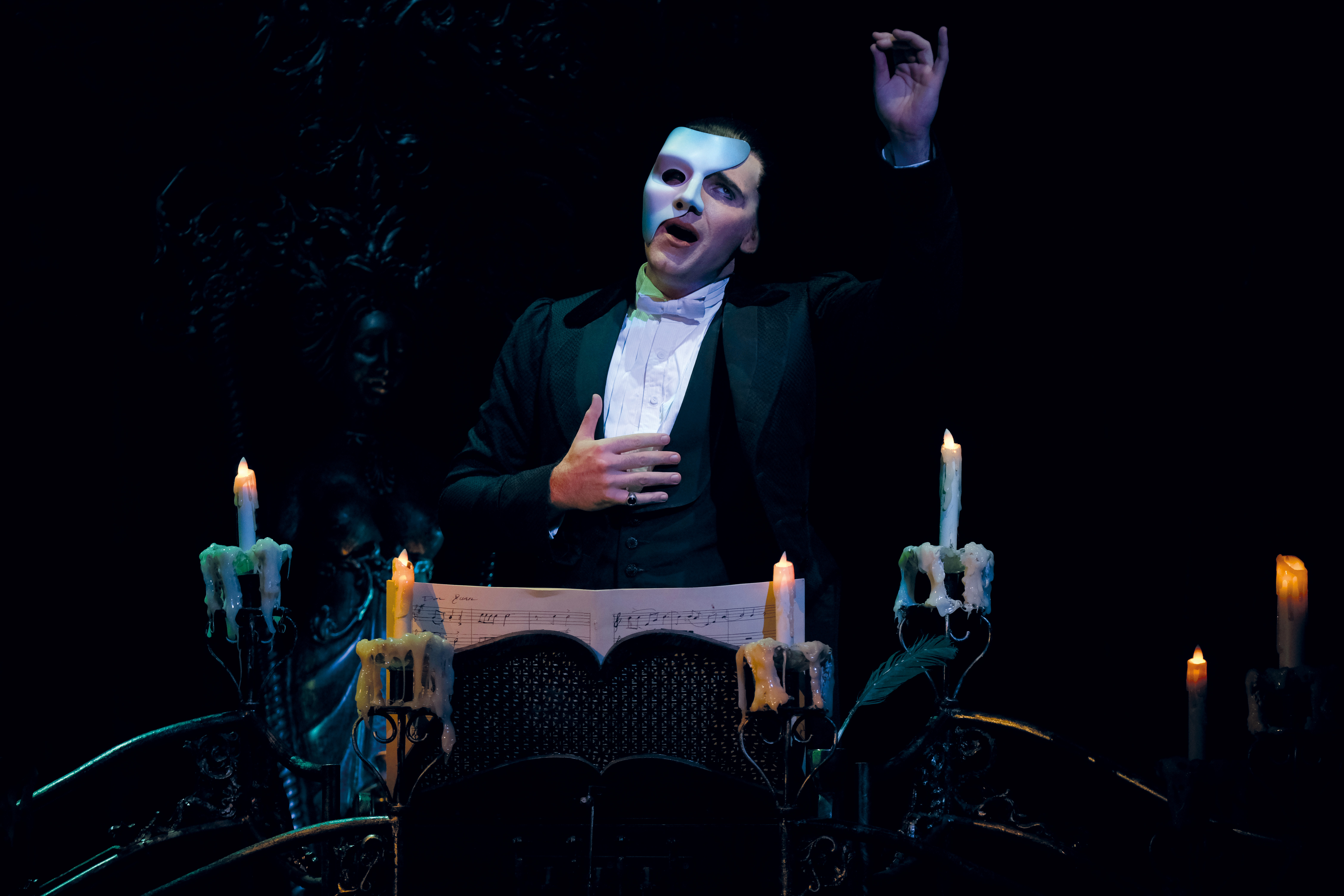 “Having been part of the Manila premiere back in 2012, the audience there didn’t know the tricks, the stunts and the magic, and they clapped so hard everytime. There’s something extra special about that I sometimes wish I could go back to, and experience falling in love with this musical all over again for the first time. It’s a musical you never forget, and when I saw it in South Africa, I immediately knew and recognized it as one of the best musicals of all time,” Roxmouth concludes. 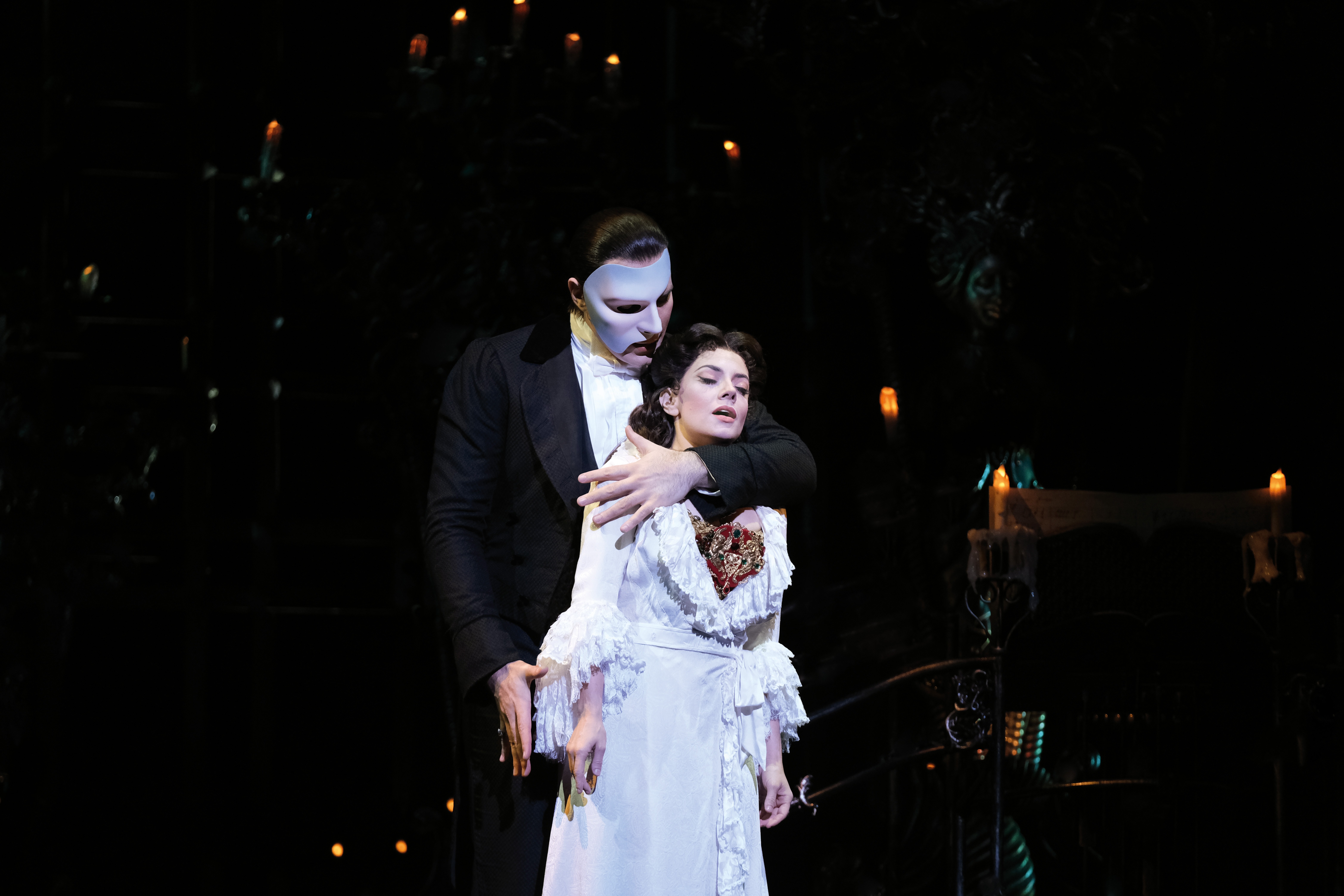 Even if this is the third time the musical has come to Singapore, you feel the enthusiasm and emotions emanating from the audience experiencing it. Whether it’s the first, third, or umpteenth time they’re catching it, we are left enthralled by the power of Andrew Lloyd Webber’s unforgettable songs, still impressed by the inimitable design elements and moved by its central story of a man who is saved from the darkness by love, and hope that society can and will learn to see the light in all of us. Hope shines through as the Phantom’s love allows Christine and Raoul a happily ever after at his expense, and we are left only with the hauntingly beautiful music of the night.

Photo Credit: The Phantom of the Opera World Tour

The Phantom of the Opera plays at the Sands Theatre at Marina Bay Sands from 24th April to 8th June 2019. Tickets available from SISTIC

0 comments on “Review: The Phantom of the Opera presented by BASE Entertainment Asia”