In a world ravaged by militant and/or corrupt authorities, how do we, as ordinary citizens, learn to take a step in the right direction in the hopes of a better future? In Jason Wee’s Quora Fora: A Rehearsal, the local artist poses this question to the audience in attendance with a performance art piece combining opera, poetry and architecture.

Playing at the Ngee Ann Kongsi Theatre at Funan as part of the 2019 Singapore Biennale, the 30-minute performance seeks to examine the notions and ideals of ‘the quorum’, referring to the minimum number of members necessary to proceed with parliamentary proceedings within a deliberative assembly. The performance comprises singers Ng Wei Yi, Kok Leong Ong and Wilson Goh dressed in black, standing in a row as they perform a libretto by Wee to music composed by Li-Chuan Chong. 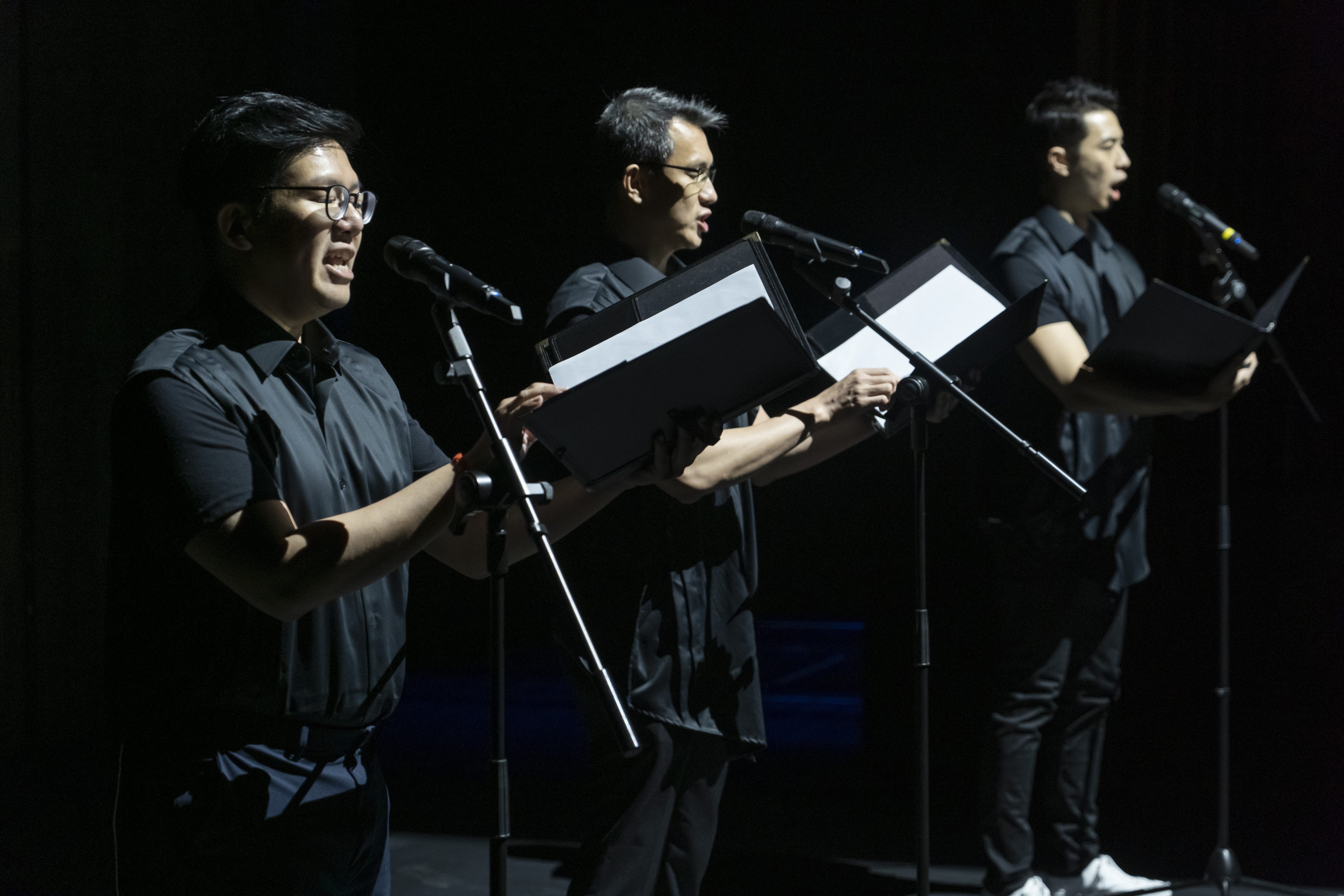 The piano-driven music itself feels menacing, often fierce and forceful as the singers layer lyrics upon lyrics on each other. There are moments one can make out individual words or phrases, but for the most part, it feels like an organised cacophony of anger directed at the audience. In between, Jason Wee walks around a heavy mirrored cube in the centre of the stage, unfurling long coloured flags that stretch down from the circles, and affixing them to the cube, occasionally pausing to speak lines such as ‘We the citizens’. After the performance, audience members are allowed to come up onstage to get a better glimpse of the installation, or head up to the upper floors to read the words printed on the flags, such as “How can you spell authoritarianism without Asia?”

With so many components to it, its form alone suggests an intricacy and technicality that may go over those not as well-versed in music or literature. For most people, one can only appreciate certain aspects of it at first, and require a second viewing or more thought and imagination to go into it to get the point it is trying to make. Certainly, our own interpretation of it were more to do with the immediate, visceral reactions towards it rather than the many layers it possesses. We think of the singers as a form of authority, assaulting us with words that make sense when read, yet chaotic when arranged as such. The sheer height of the piece only adds to how we feel small in the face of such questions and statements printed on the flags, and we wonder to ourselves how we are to react in the face of such an overwhelming piece, in both sound and stature. 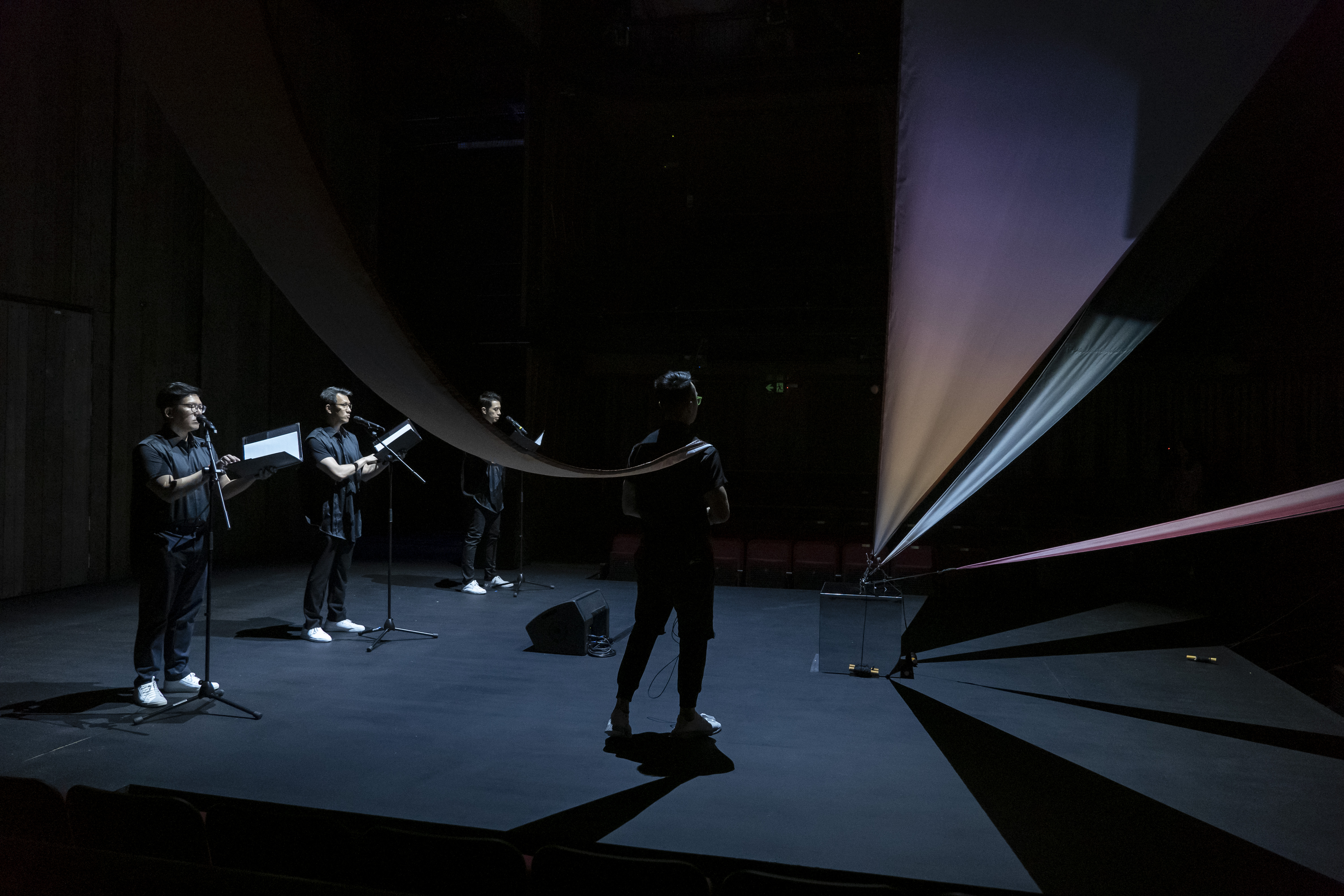 In speaking to Jason, he tells us of the projects’ origins, starting as a result of writing multiple haikus while working on a book about artist Lee Wen. “I thought a lot about the fixed structure of haikus, and the extended, collaborative form of the renga,” says Jason. “That’s something that could literally go on for hundred of instances, but it would always feature 17 syllables, in the 5-7-5 format.”

“It started to feel like a conversation with myself, and I ended up writing haikus for a manuscript that revolved around thinking about the future of Asia. Much of this came about from my increasing preoccupation with the state of politics, from the Indonesian elections, to Thailand being unable to get certain constitutions passed because of the military regime, and more recently, the Hong Kong riots, fears of Taiwan returning to Kuomintang rule, and I started to wonder about Asia’s fascination with such strongman regimes.” 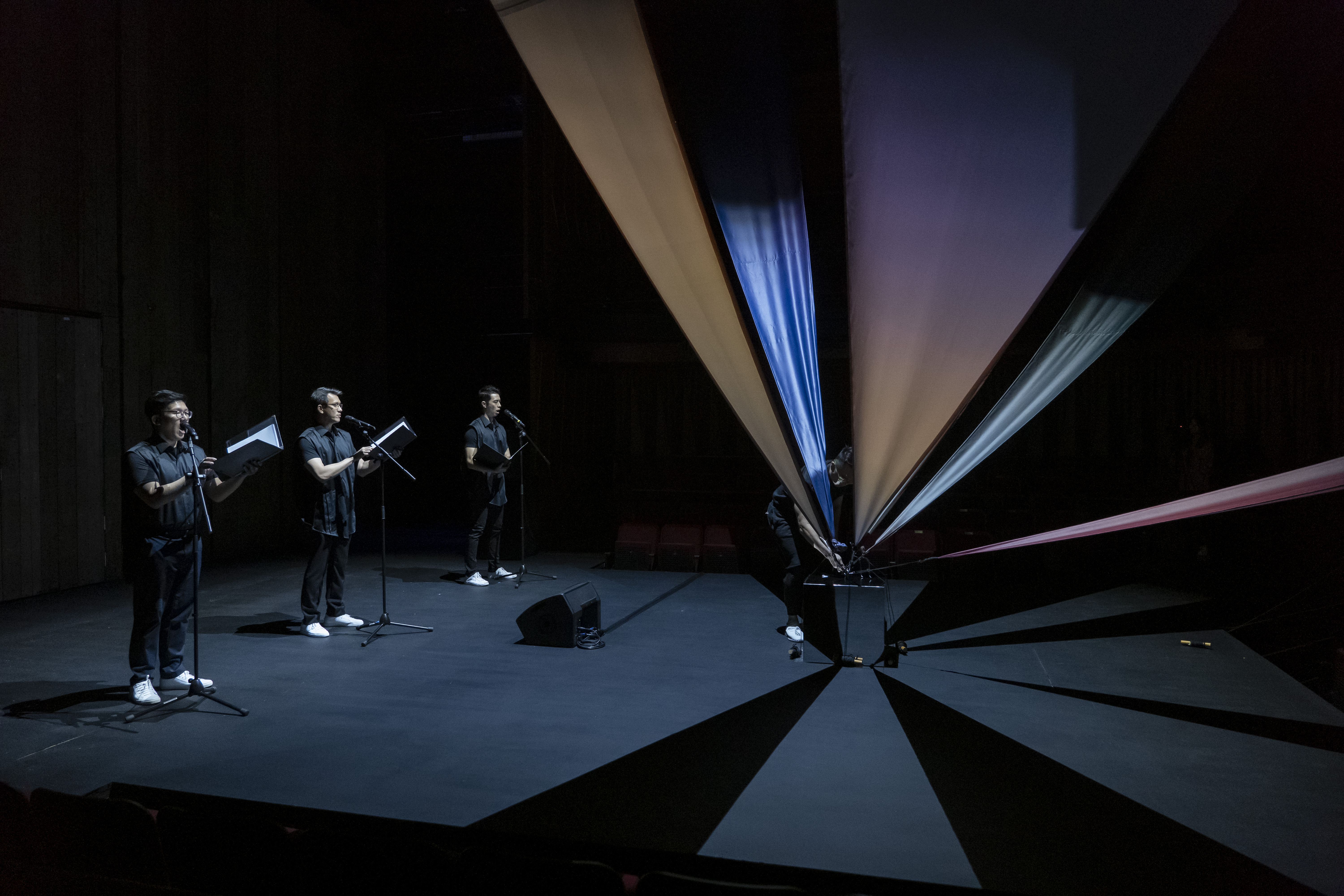 Jason goes on to talk about how that eventually led to the words printed on the flags, raising questions about authoritarianism, politics and belief systems, before linking it to a greater, historical idea of how these systems even originated in the first place. “I started wondering about an assembly producing different possibilities, and what are some of the questions we’d be asking,” says Jason. “I went back to the very architectural design of the quorum, and thought about how back in Greece, the forum was a theatre. There were a lot of parallels between the voting assembly and theatre space, and it was interesting how even the Greek chorus came into play.”

While still in its fledgling stages at that point, when a Biennale curator approached Jason to find out what he was working on at the moment, he decided to develop that idea into a full work, turning words into concept into performance. “I decided that I was going to incorporate music into it, and that it would be staged as a theatrical performance,” says Jason. “It was quite challenging to find a space, and there was a lot of competition for spaces we wanted, such as initially wanting the National Museum’s rotunda space. I also didn’t want a single level or square theatre, because then the effect would be lost. Eventually, I spoke to Ivan (Heng) from W!ld Rice, and they’ve been very supportive of the work, which also doubles as a way to help them test the space and its acoustics after the recent refurbishments.” 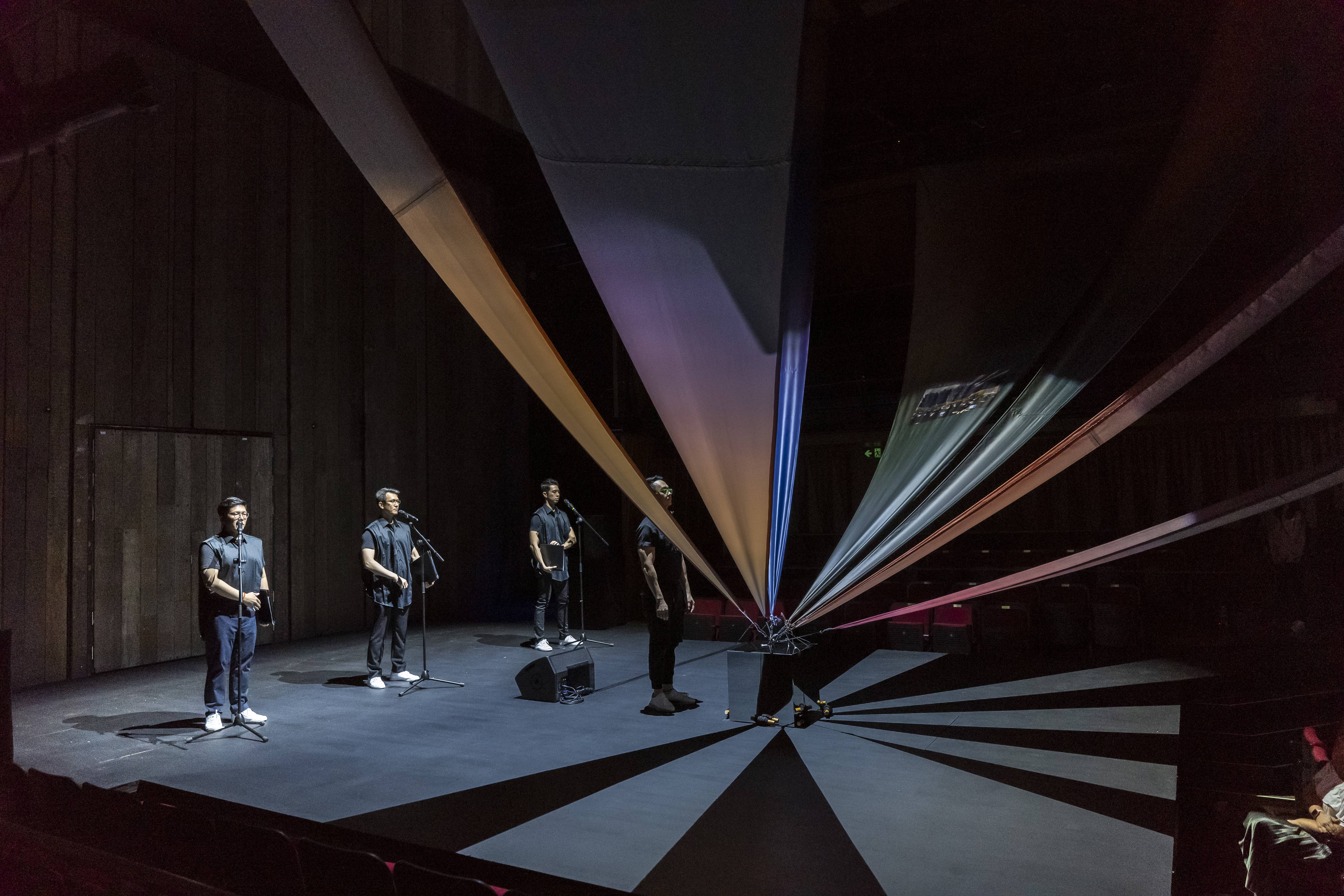 Jason acknowledges the intricacies of the piece and how it becomes a chimaera of an art piece, neither housed in a typical museum space nor conforming to a specific medium. “Something I appreciate about the piece is how different people can really come in and take away different things about it, depending on their backgrounds and what they notice,” he says. “We’ve had people from the literary scene who focus more on the words, and people from the music scene who really enjoyed the composition, and how they’ve all had varying interpretations.”

“The music, for example, was very much composed in accordance with the words I had written, such as becoming more forceful at the words ‘a statement is true if it contains truth, in whole or in part’. That’s related to POFMA phrasing, where they speak vaguely about what constitutes a falsehood, yet never fully defines it. Li-Chuan picked up a lot on these nuances in the language, and made those parts particularly grim. Even I didn’t notice it at first, but the more I listened, the more I saw how it all came together, like how when they hit the same note over and over again, like a dirge, you can tell when there’s a sudden change in key.” 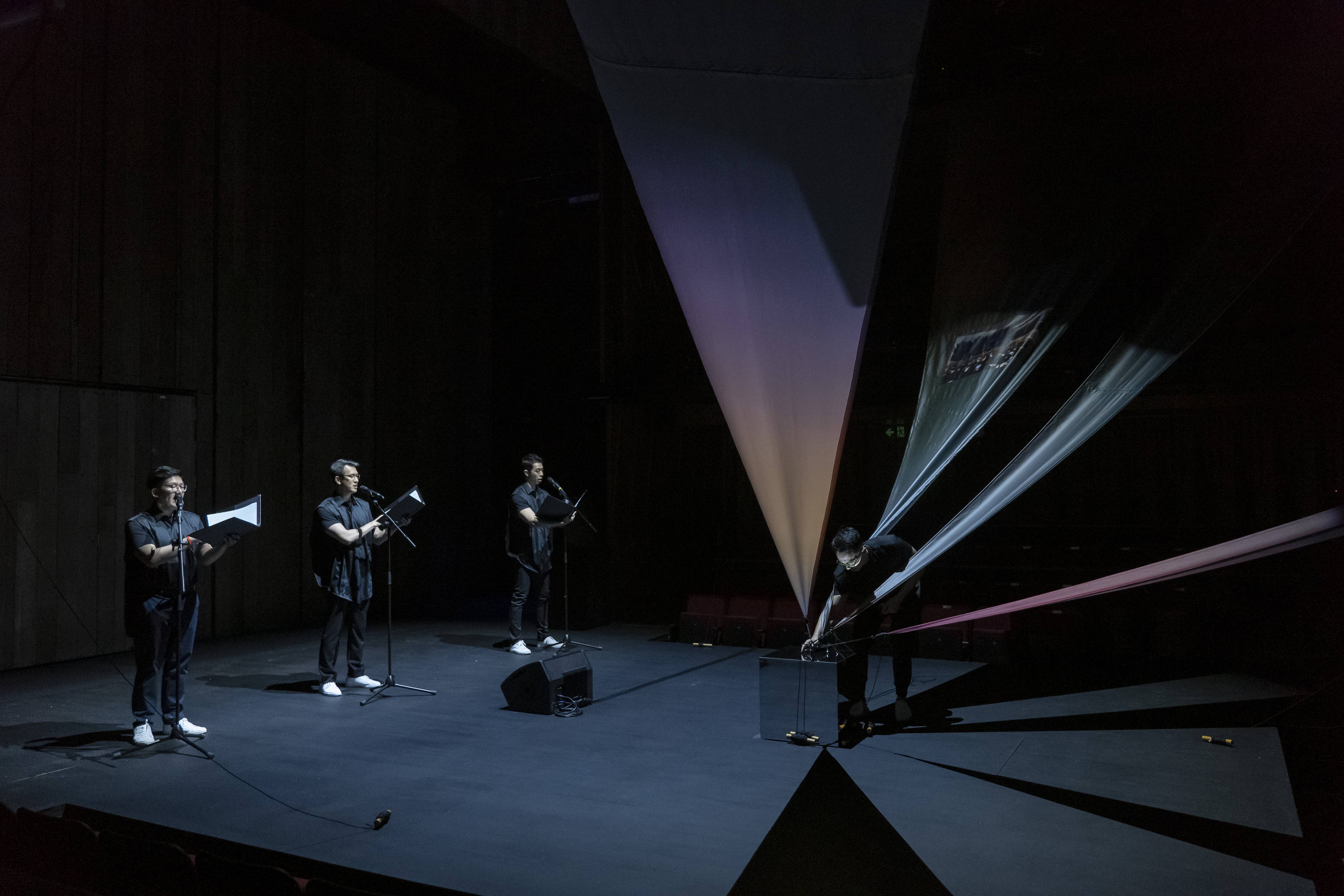 On the subtitle ‘A Rehearsal’, Jason comments that it will never not be one, as a work that spans plenty of possibilities, and how the whole idea is a rehearsal for both the performers and audience, preparing them in a sense, for a future they cannot predict. “We’re thinking about how the afterlife of this work will feature more choreography and different compositions to bring out the words and change the meaning each time,” he explains. “Over the course of its development, we changed a lot about who would perform what or who might make an appearance – I wasn’t even supposed to be onstage initially. There’s the idea that anything can happen, and I was even thinking of how it could be a durational performance if we ever shifted to a museum space, and have people watch it at different times of the day and perhaps garner different reactions.”

“The rehearsal also refers to how people make a choice as to how to approach the work by the end of the performance and interact with the installation. It was interesting to watch how many people hesitated before coming up, or how long it took for the first person to go up and observe the installation. Every one has free reign to roam and observe, but if you don’t go up to say level 1 or 2, there are certain nuances that you’ll miss if you don’t read the words on the flags. But at the same time, I don’t want to tell that to people directly, and hope that people will do that of their own accord instead, maybe if the ushers gently nudge them that they can.” 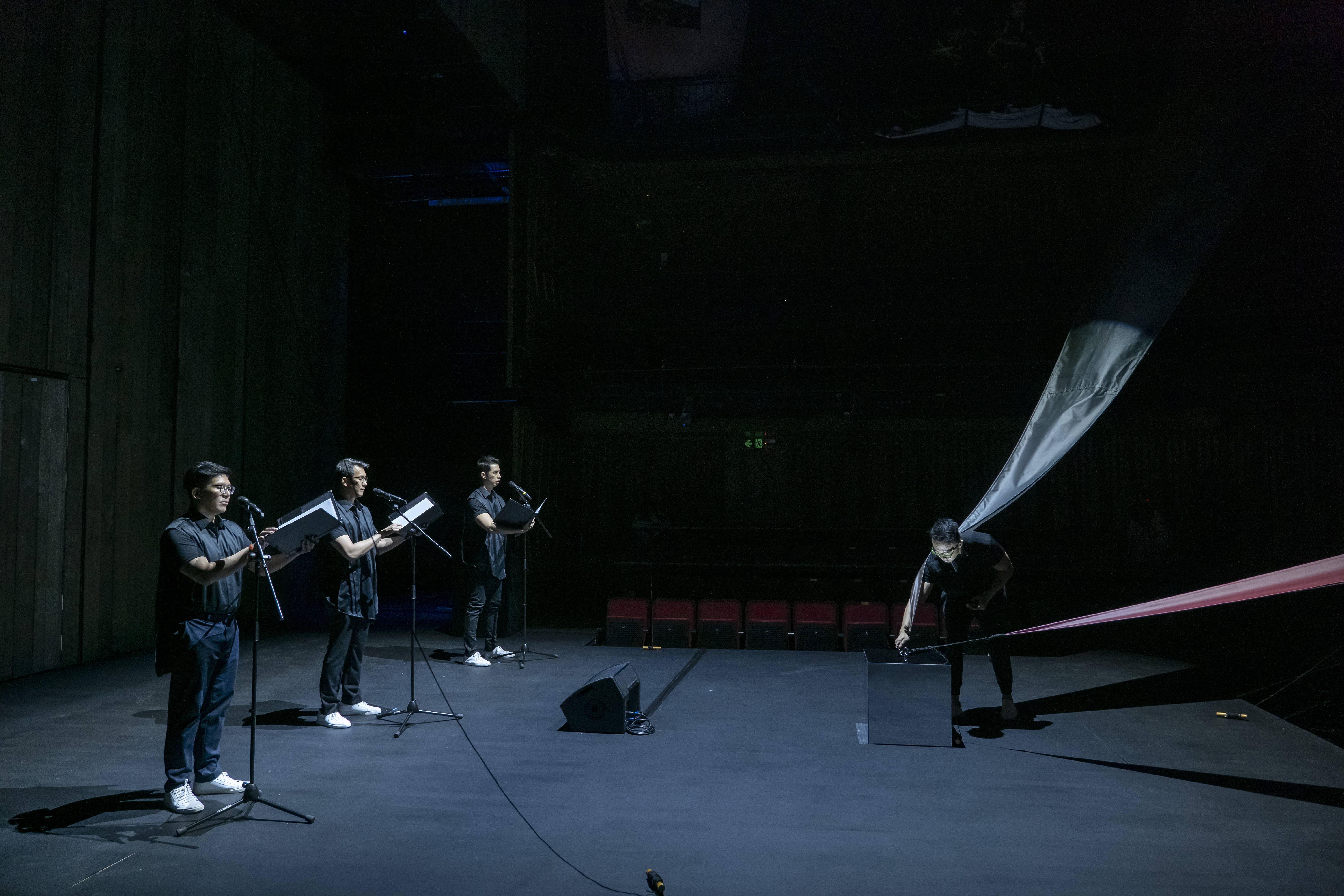 “At the end of the performance, I really just wanted to leave people with an experience that would end with them having more questions than answers, and wondering to themselves what steps they can take in the face of authoritarianism,” says Jason. “I’ve talked to friends about the Hong Kong riots, and there is a lot of debate about how the protesters should have worked together, but there really are many different ways it could have turned out, and no one right way of doing it. If this happens to be your way then it is your way, and in some way, every step is the right direction.” 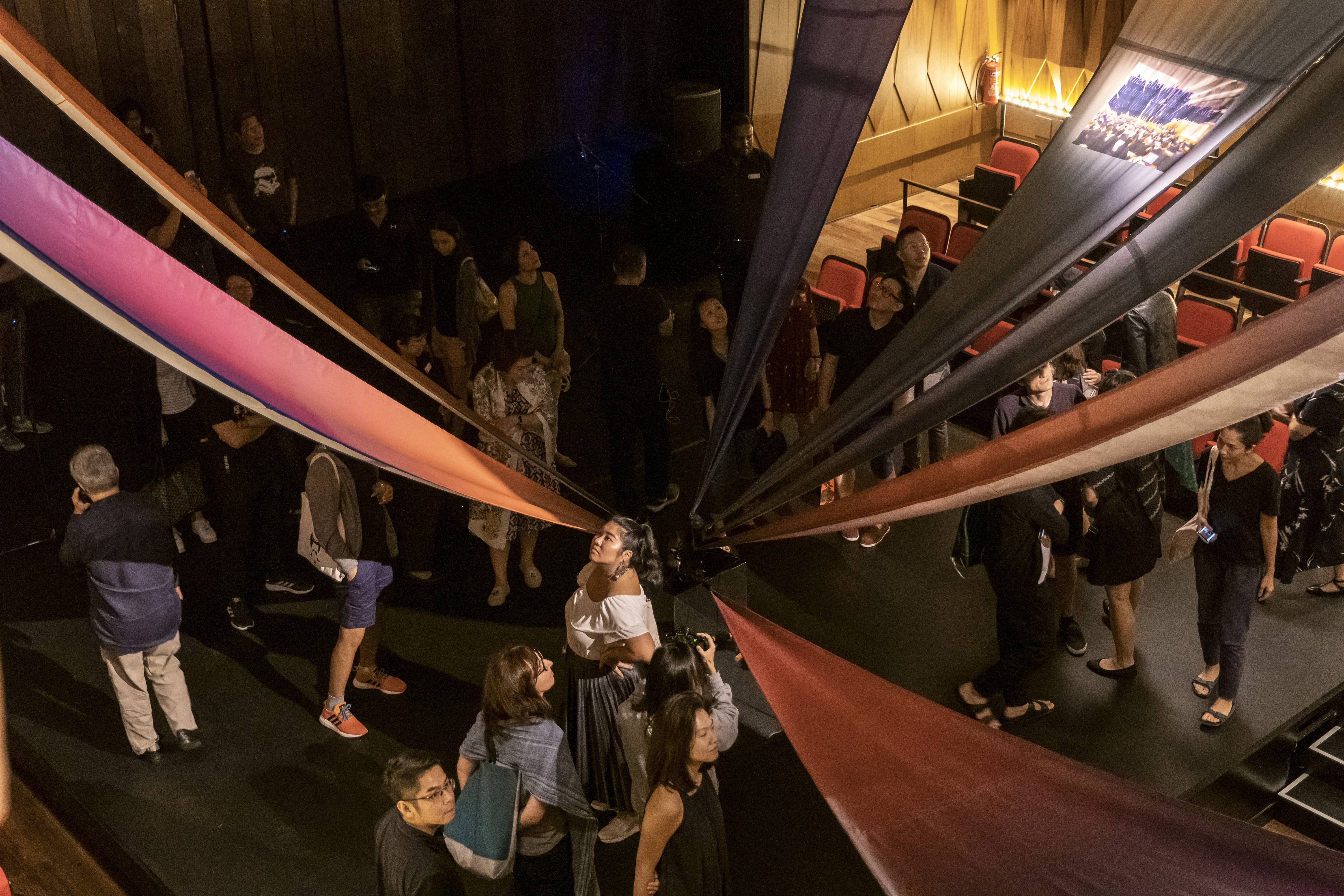 By the end of Quora Fora: A Rehearsal, we may not yet know what exactly it takes to make a successful assembly, but we are left curious about how, if the current state of ‘democracy’ isn’t working out all that well for citizens, what is the ideal we should be working towards eventually. “As regular citizens, we really don’t know what exactly the authorities or the Big G wants to do with their policies, but I did want audiences to leave thinking about their own responsibilities as individuals,” Jason concludes. “Given the space, would they be able to step forward and ask questions? If they ever had the platform, would they be able to speak up?”

Quora Fora: A Rehearsal plays again on 16th March 2020 at the Ngee Ann Kongsi Theatre at Funan. Admission is free via registration on Peatix

Singapore Biennale 2019: Every Step in the Right Direction runs from 22nd November 2019 to 22nd March 2020 across 11 venues in Singapore. Visit singaporebiennale.org for more information.