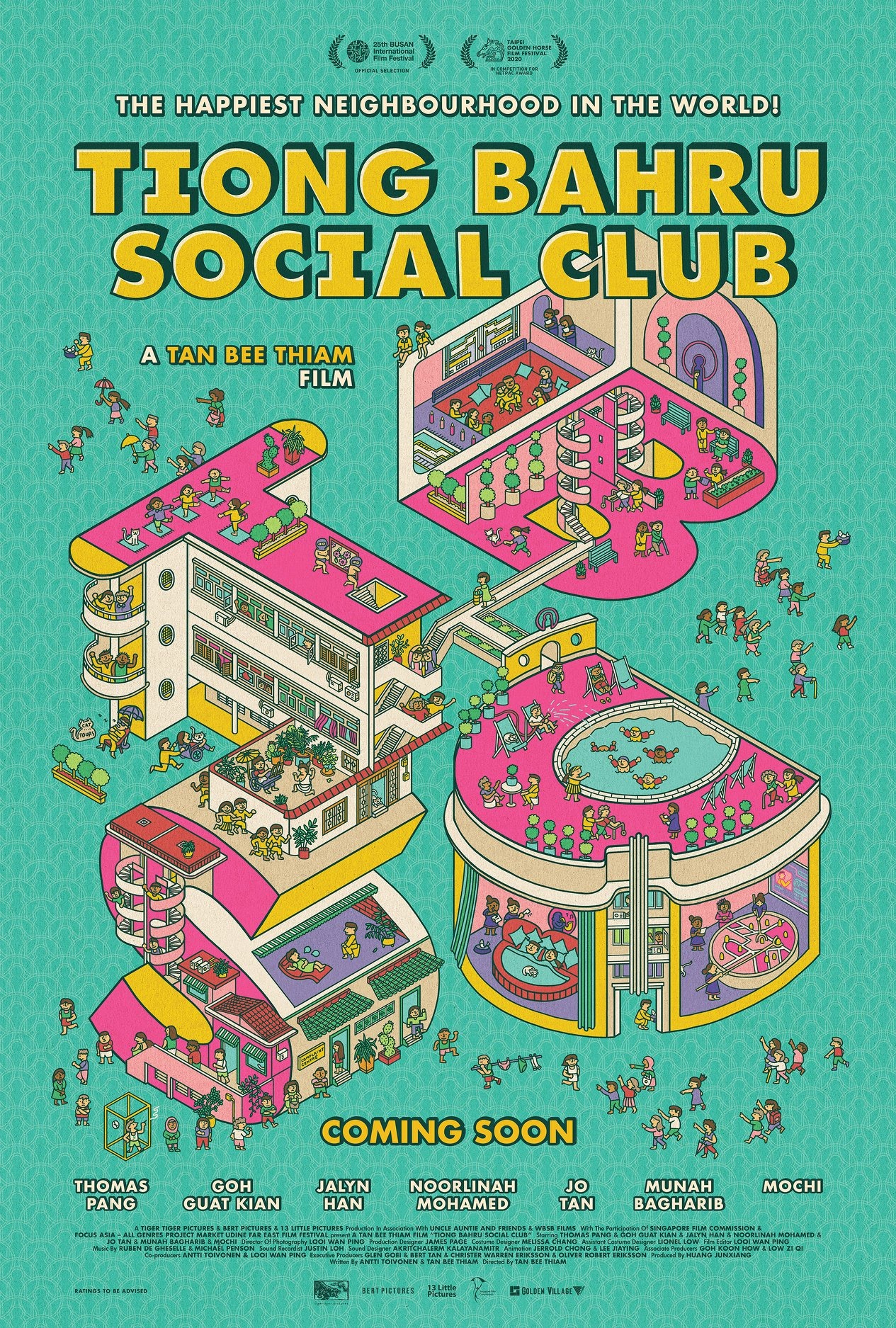 The absurd idea of controlling happiness is lost in this manmade pastel utopia.

Touted as ‘Wes Anderson meets Black Mirror’, Tan Bee Thiam’s Tiong Bahru Social Club is a decidedly bolder film, both aesthetically and ideologically, compared to the usual Singaporean fare we’re used to seeing. Set in an alternate reality Singapore, the film’s title refers to a new initiative transforming the gentrified neighbourhood of Tiong Bahru into a glorified retirement home. With the goal of creating the ‘happiest neighbourhood in the world’, Ah Bee (Thomas Pang), the club’s newest hire, dives into the pastel-hued, data-driven world they’ve created, and slowly uncovers the absurdity of artificially generating happiness.

As a film, Tiong Bahru Social Club is rife with good ideas and potential. The very basis of the club seems like a prime source for social commentary, all surrounding Singapore’s idea that happiness can be distilled to a formula (and failing at it). From the dissatisfaction and emptiness experienced by the club’s employees, to the mechanisation of something that should be as natural as a hug or laughter, Tiong Bahru Social Club hides a swathe of criticism underneath the Instagram-ready aesthetics and the forced smiles. 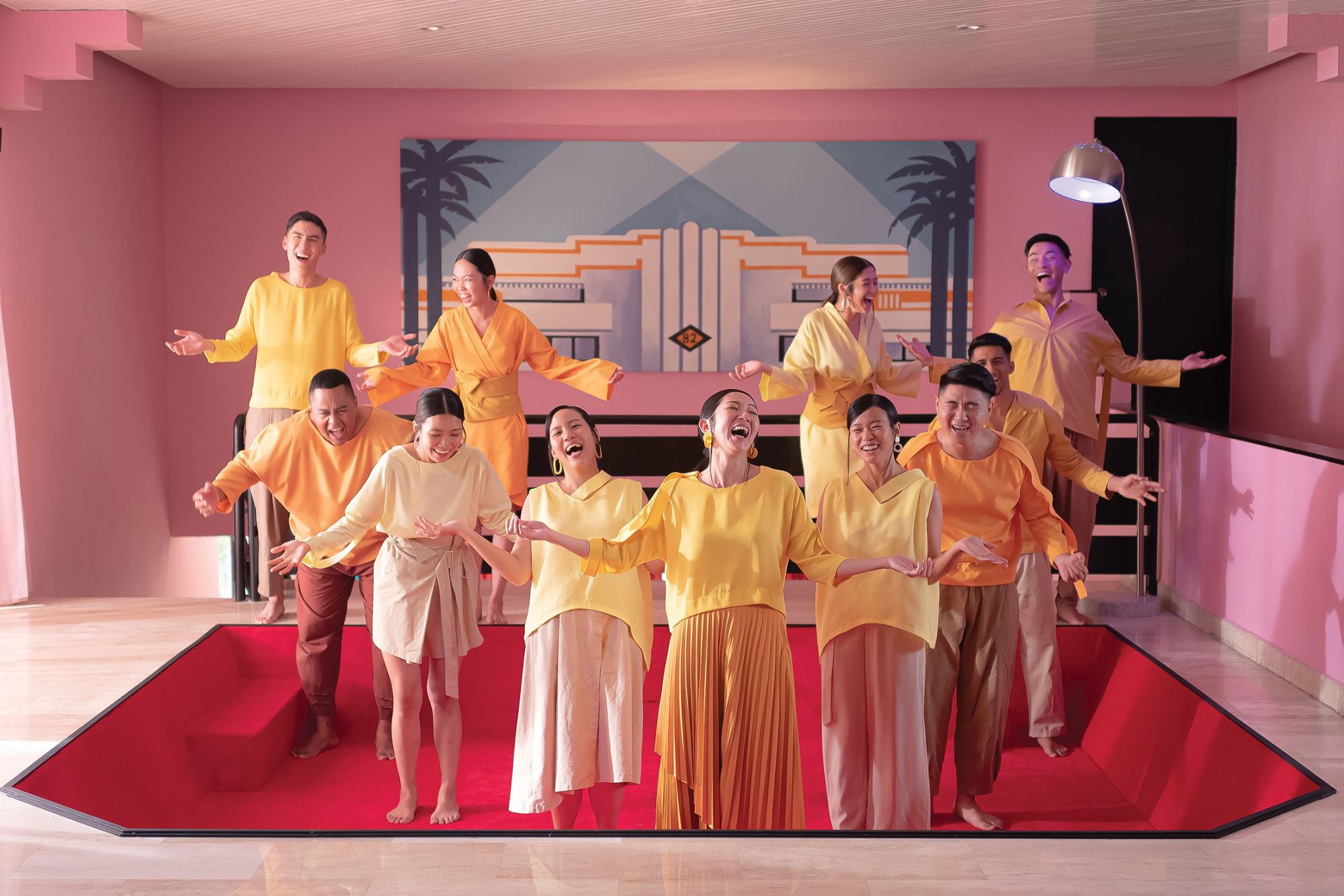 Tiong Bahru Social Club has a keen sense of comic timing, whether it’s from misinterpretation or dramatic pauses. From Bee making a laugh out loud social faux pas during a game of ‘shoot, shag marry’, to the audacious, devil-may-care attitude of his cat-obsessed ward Ms Wee (Jalyn Han, milking what is certainly the best role in the film), audiences are likely to be left tickled by characters breaking social convention, with the film itself finding joy in its willingness to take things to their absurd extremes, such as the ridiculous way characters chant ‘very good very good yay’ at the end of every training exercise. 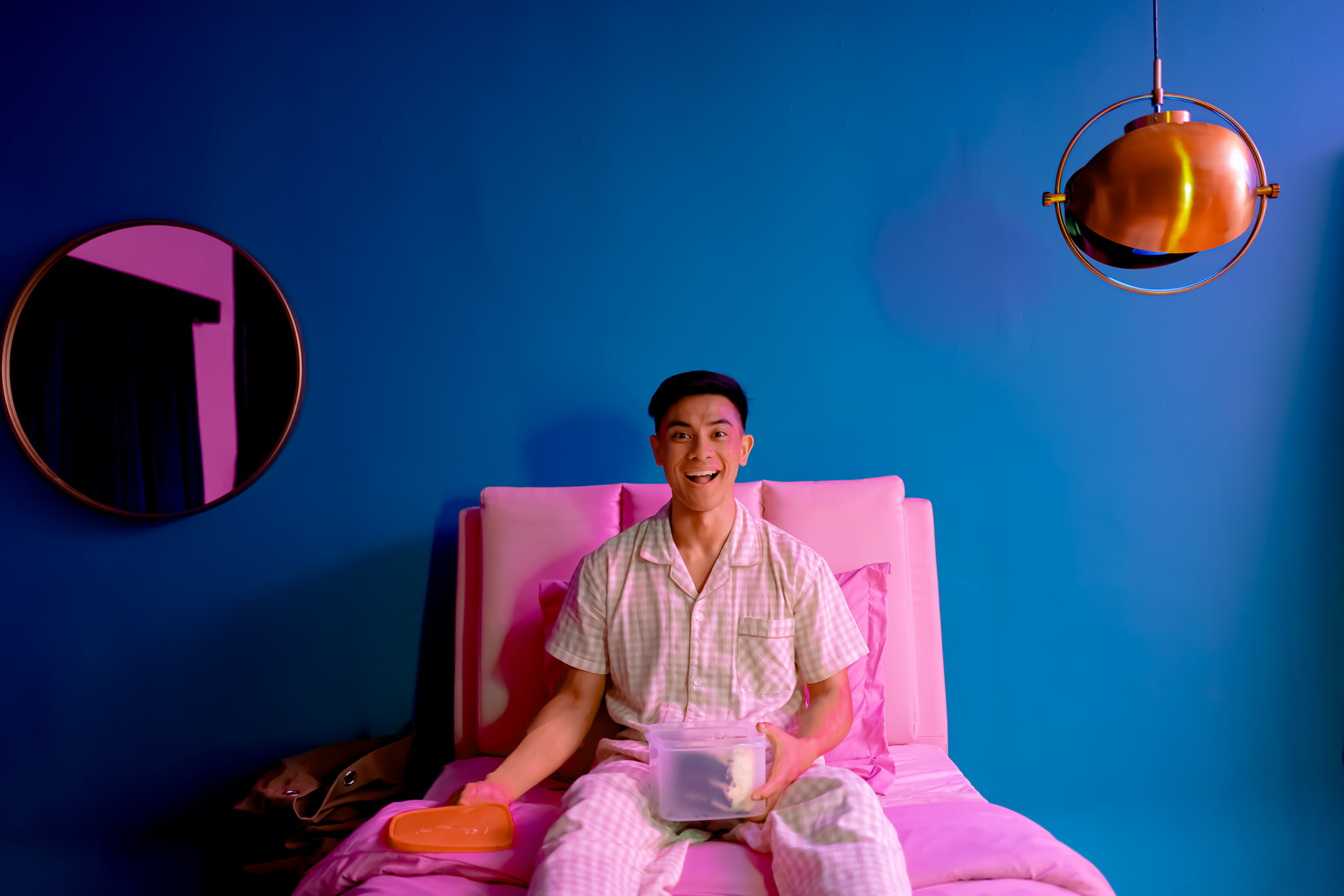 One also appreciates how director Tan Bee Thiam pays such close attention to his cinematography, with strong framing in his shots for dramatic and aesthetic effect. Particularly impressive is a sequence where Bee is looking for his lost cat, and an angry mob somehow ends up following him to aid in his search, with the sheer number of extras involved making for a memorable scene. Elsewhere, we see good use of colour, set design and lighting to heighten the sense of artificiality and construction, and further enhances the alienation and distancing the club has on us. The creepy AI BRAVO60 helps highlight our over reliance on technology, and emphasises our increased social distance in a time where the digital is king. 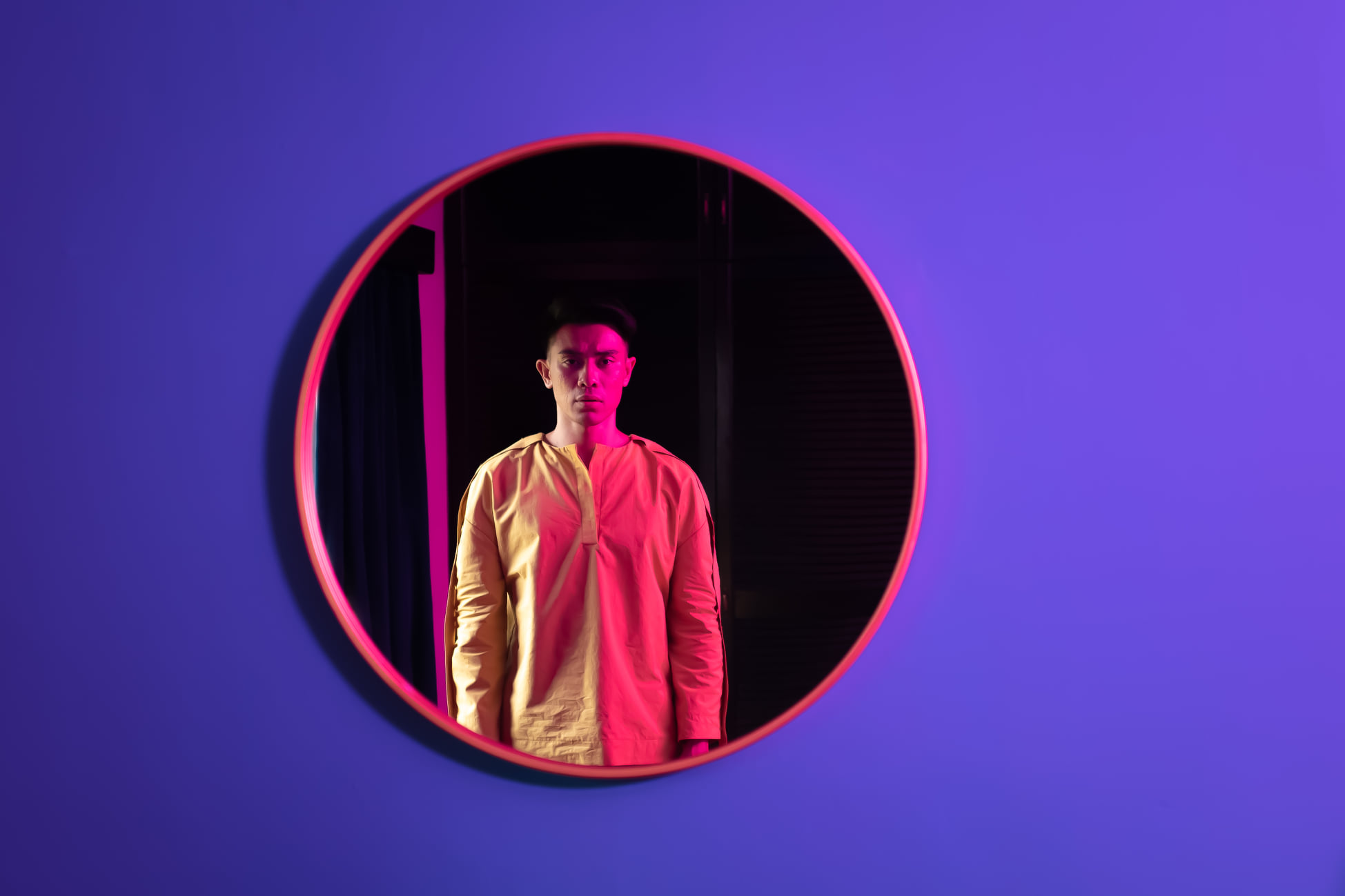 But much like how it seems to be commenting on the emptiness of an existence predicated on conforming to rules to maximise happiness, it is almost ironic how little heart the film displays, with virtually no plot or driving force to anchor us to the film, almost threatening to fall apart by how thin its scenes are threaded. Most characters have potential to have greater storylines, but many disappointingly stop short of being explored further. For example, Jo Tan as top employee Geok works hard, but reveals that most of her interactions are merely facades, hiding a deep-seated insecurity about the fear of being alone that never gets explained. 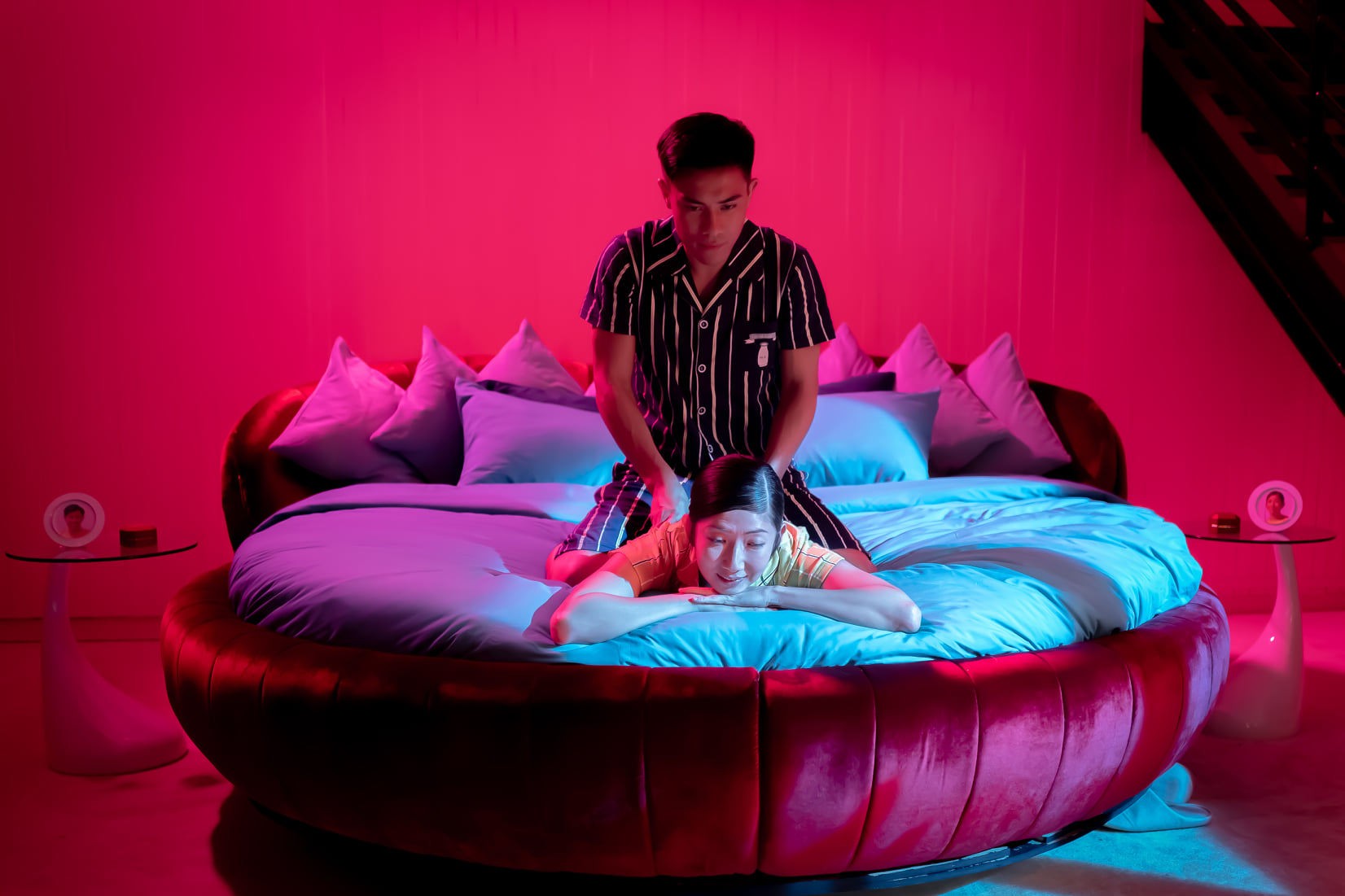 With such a strong cast, most of the actors are underutilised, and their potential unfulfilled. Noorlinah Mohamed, as club manager Haslinna, plays the facetious role well, but her sinister undercurrent (and mysterious boss played by Anita Kapoor) is never played up or looked into. Despite her star billing, cast as Bee’s mother, Goh Guat Kian is never given enough to plumb for emotions, while Thomas Pang, as Bee himself, is given close to zero lines throughout the show, and his talent is undermined by being reduced to an almost deadpan character with few expressions. By the end of the film, we have no idea about who Bee is as a character, besides being someone who puts others’ happiness before his own, but never reaching a situation where he makes it a point to live for himself or where it lands him in a dire situation. 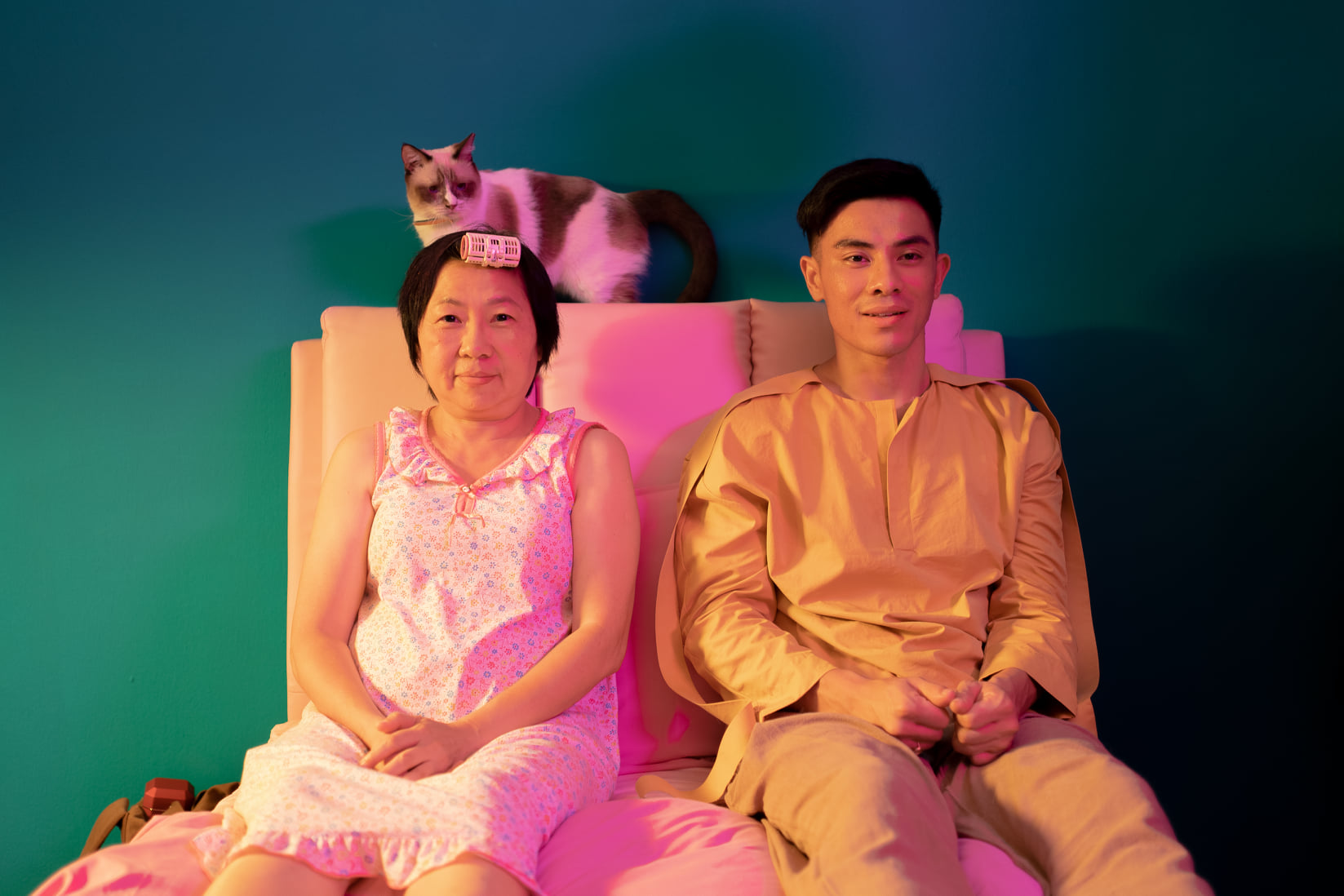 Tiong Bahru Social Club also seems confused by the message it ultimately wants to put across. Having Bee and his mother originally living at the (now-destroyed) Pearl Bank apartments suggests themes of loss in the face of progress, but are never expounded upon (further complicated by its residents preferring the money from the en bloc than fighting for conservation). The social club eventually expands, taking over Pearl Bank, and by the end of the film, it seems that nothing and no one has changed, the pursuit of happiness both within and without the club continues, and the film’s version of Singapore remains as beautiful but emotionless as before. Bee quotes Lao Tzu, stating how it is the emptiness inside a pot that gives it value. While we revel in the pastel and celebrate the ideas that Tiong Bahru Social Club possesses, at the end of the day, we just wish there was more to it than just a hollow pastiche.

Tiong Bahru Social Club releases on 10th December 2020 at Golden Village and other cinemas across Singapore.