For anyone who’s had a brush with Sir Terry Pratchett’s Discworld series of novels, you’re likely to have encountered stories surrounding The City Watch. With the largest number of books centering around the motley crew of misfit guards and policemen, The City Watch has almost certainly emerged as some of Pratchett’s most enduring and beloved characters, as they live on in fans’ memories and imagination protecting the capital city of Ankh-Morpork from dragons, trolls, guns and even…auditors.

And while various other characters have received adaptations in the form of television specials and animation, for the first time ever, BBC America is finally bringing The City Watch to the screen, as The Watch arrives on television this January. ‘Inspired by’ Pratchett’s writing and characters, the first season of The Watch already thrusts viewers into a fantastic fantasy world of action, as Captain Sam Vimes leads his team of werewolves, dwarves, trolls and dragons against an evil, apocalyptic plot.

Much of the first season loosely follows plot elements from Guards! Guards! and Night Watch, with familiar characters from both novels playing significant roles over the eight episodes, something eagle-eyed viewers familiar with the novels would immediately be able to tease out. But for lead actor Richard Dormer, who plays Captain Sam Vimes, much of the show was viewed through brand new eyes, as someone who was essentially encountering the Watch’s stories for the first time in a long while.

“I read the first few Discworld novels back in my teens, when I was going through drama school,” says the 51-year old Northern Irish actor. “When it came down to Guards! Guards!, I ended up passing my copy to a classmate, and ended up never finishing it! But when I came onboard this project and read the script, it felt like I was coming back to a fantasy world I knew.”

With his unsullied, untouched image of Sam Vimes, Richard was able to fully invest in the script (led by lead writer and executive producer Simon Allen), and become this character without pre-conceived notions. “I was blown away by the originality of it all, and how it could really leap from one style to another in one extraordinarily chaotic world,” says Richard. “I never got introduced to Sam all those years ago, and I was just so drawn to his humanity. He’s a poor guy, where the world really hasn’t dealt him a good hand of cards, but still remains heroic, even if he doesn’t quite know it. What I did was really to stick to the soul of the man, which is rooted in fortitude, having a good heart, and being quick-minded (but frazzled).”

“At the start, we find him at his lowest ebb. He’s broken, dissolute and hates himself. Then he brings together a bunch of people who have been discarded by society and feel wretched. Together, they start to feel strong. It’s a very hopeful story. I hate to use the word, but it’s redemptive,” he adds. “He is the last person you’d expect to be a hero, and he is equally surprised to find himself in that role. His superpower is that he brings people together. On his own, he is absolutely useless and is prone to giving up. But together, The Watch are very powerful.” 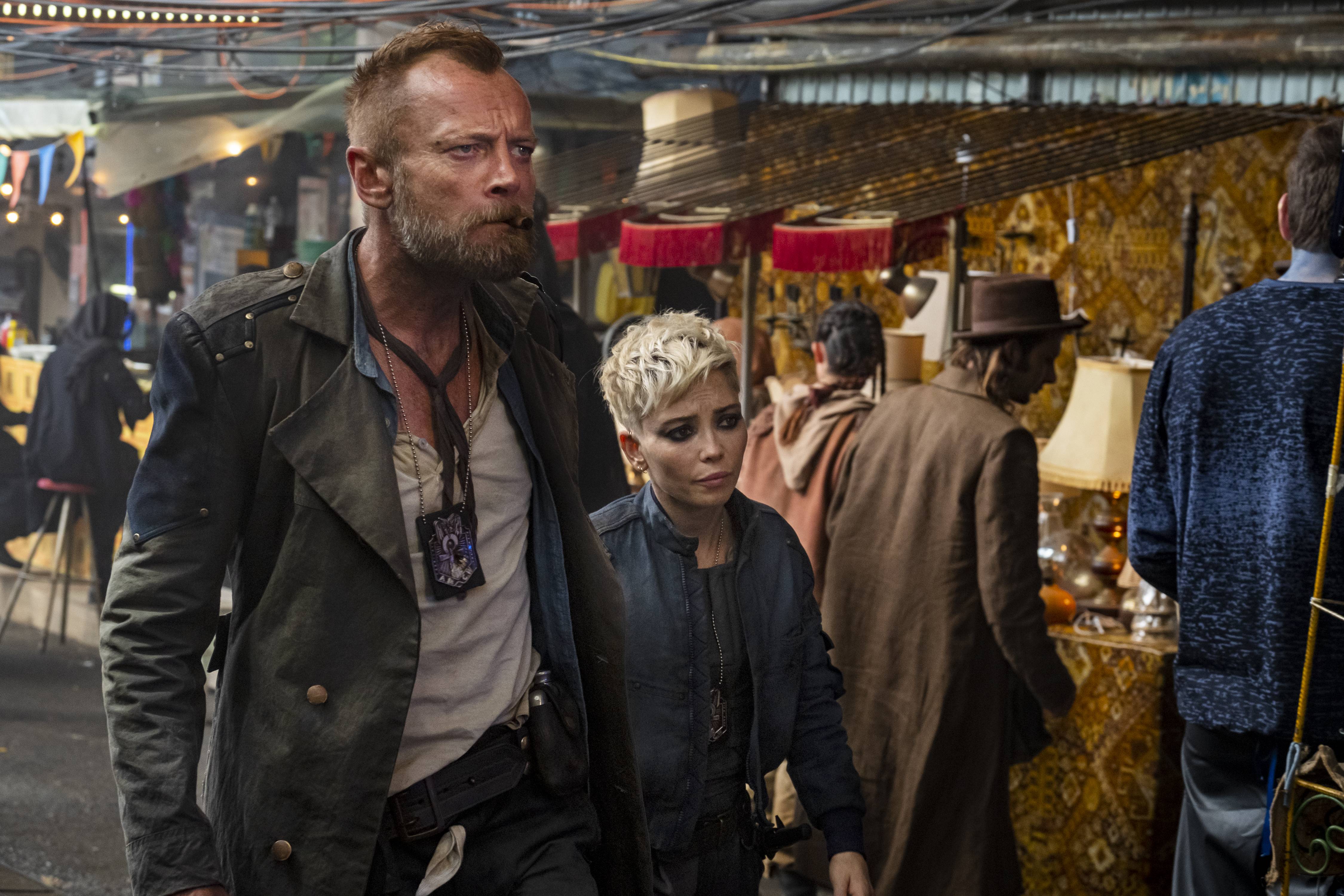 The Watch certainly wouldn’t be the first high-profile fantasy series that Richard has been a part of though, and fans of HBO’s Game of Thrones are likely to recognise him as Beric Dondarrion in the series’ later seasons. “I choose parts because of the character, not whether it’s a sword-wielding fantasy show with immortals, or a realistic show set on a remote island on the Scottish coast,’ says Richard. “But the thing about fantasy and sci-fi is that it’s a lot of fun to work on these shows. It’s a little removed from reality, and you have this chance to be bolder and more enigmatic on set. It’s sort of like being in play school, and the actors are like big kids rolling around.”

Much of the immersion was thanks to the production team and how realistic they made the world of Ankh-Morpork, with very little CGI involved. “Even the trolls and the goblins, most of them are portrayed via animatronics or actors in prosthetics, so the world did feel very much real,” says Richard. “And it was amazing filming on location, with places like actual mountains and deserts, or how in Cape Town, we ended up in this old concrete market on the street that the production team spent months transforming into what you see onscreen. It’s very Terry Gilliam, Blade Runner-esque, and otherworldly, and it really was a joy just going to work and letting yourself just believe in this crazy world, where all these wizards and werewolves are walking around like it’s just another day.”

Of course it also helps to have a good cast working alongside him, such as Lara Rossi, who plays the vigilante Lady Sybil. “As there is no law in Ankh-Morpork, at first Sam merely protects people out of habit rather than passion. Then Lady Sybil comes into his life and shakes him up,” says Richard. “He needs her, and she needs him. They are drawn together because they’re both orphans. They’re both adrift and trying to fix the world. By fixing others, they are trying to fix themselves. They complete and inspire each other. They are the most unlikely, weirdest pairing, but they fall in love. That’s why this story is so unique. That love between them is divine, pure and simple. That’s something we all need.”

“Working with Lara was magical; it’s rare to look into another actor’s eyes and immediately trust them, and I’ve never trusted another actor like Lara,” he adds. “And for the rest of the characters, they’re this dysfunctional functional family; they all bicker, but ultimately they’re stronger together and they love each other. And it was very easy to work with my cast mates, because there’s an element of their characters in each of them. They were all ready to hit the ground running when they came on set, and there was always a great camaraderie between us.” 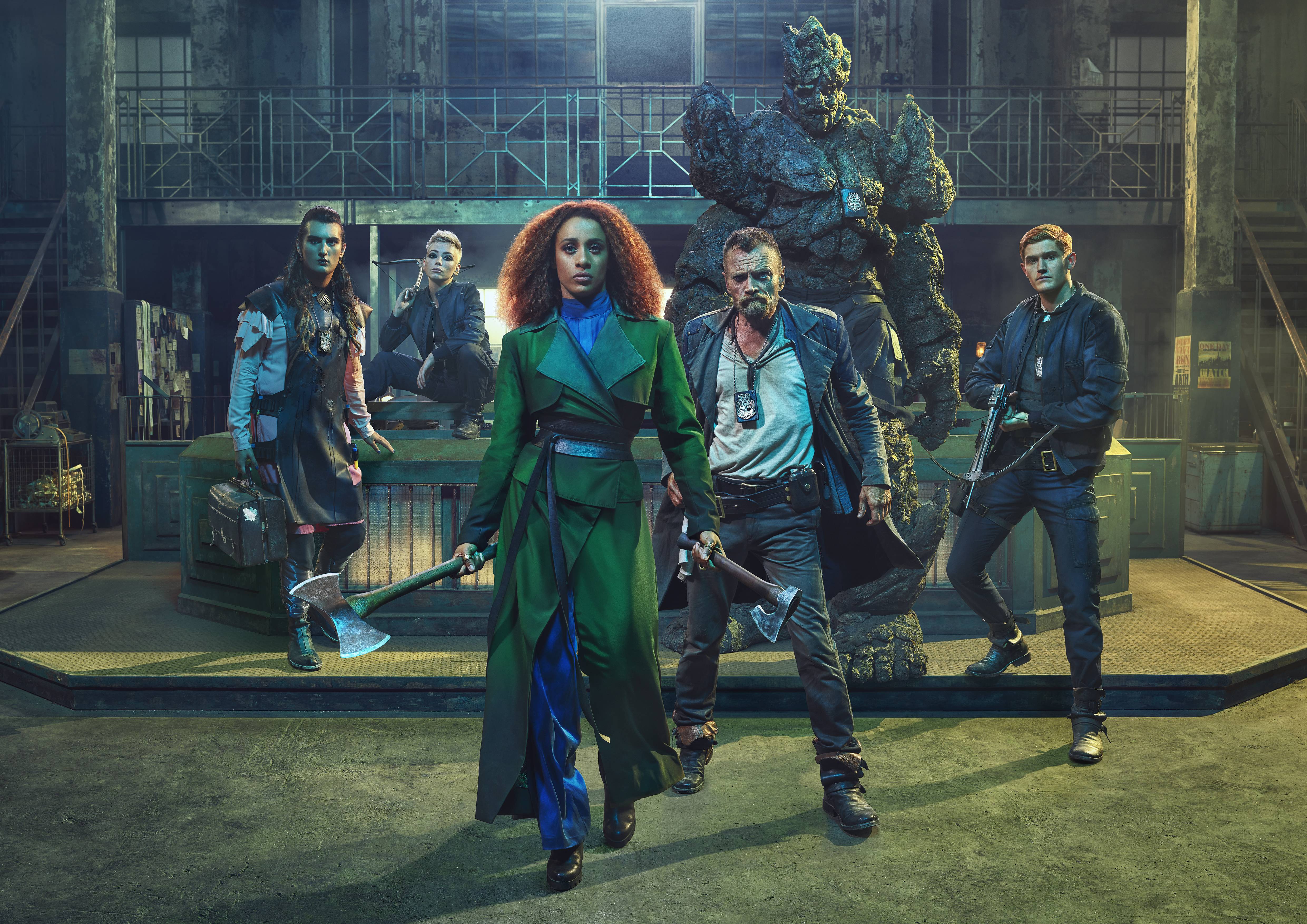 While production started around September 2019, filming had to take a break for about five months due to the coronavirus, before the team returned in September 2020 to wrap up filming in London. As a professional, Richard found it relatively easy to get back into character and finish up, even with the break, and the future at least, still looks pretty bright for Richard, who’s currently working on the second season of Sky One’s political drama series COBRA. “We had a break over Christmas and New Year, and right now, things are still pretty vigorous, and we’re always under strict health and safety rules, such as wearing masks and being tested for COVID-19 every two days,” says Richard. “But for now at least, I’ve got two lovely fireplaces I keep lit every day, while I snuggle up with some hot chocolate watching black and white movies over the holiday season.”

As for how he hopes viewers receive The Watch, Richard is nothing but optimistic about the show being able to strike a chord with everyone, regardless of whether they’re already fans of Pratchett’s work, or complete newcomers hearing about Ankh-Morpork for the first time. “It’s like how when Guardians of the Galaxy came out, most people hadn’t heard of them, but has gone down so well,” says Richard. “So for The Watch, I hope the public sit back, relax, and view it with open arms, and if you’ve read the books, then that’s a bonus. But you really don’t need to know the rules and laws of the world to enjoy it, and just let it wash over you.”

“The Watch reflects the world today, where there’s too many people simply watching, instead of speaking up and banishing the darkness around us. There’s so much injustice these days, and it’s debatable whether things are getting better, but I like to think that with so many people starting to speak out about things, it’s the latter,” he continues. “I hope that viewers end up watching this show with a huge smile on their face and a tear in their eye, because it’s a show that dares to be optimistic, and it’s got a lot of love in it. Much like how we see this family of misfits who come together and realise that they’re much stronger as a team, I hope viewers realise that no matter how dark and bad things get, so long as you stick together can get through anything, where the sky’s the limit.”

The Watch premiered on Monday, 4th January, express from the US. Available on BBC First (StarHub Channel 502) and BBC Player.

0 comments on “Television Time: An Interview with Richard Dormer, star of BBC’s The Watch”