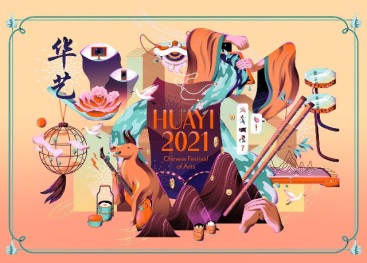 As we say goodbye to the Year of the Rat, we say hello to the Year of the Ox. And to celebrate it in true Esplanade fashion, Huayi – Chinese Festival of the Arts returns this Chinese New Year with a slew of programmes showcasing the diversity of Chinese art forms, even in the new normal.

All the World is One’s Stage

Now in its 19th edition, the Esplanade has commissioned six new works to be presented in Huayi 2021. Of these, be sure to look out for Toy Factory Productions’ All the World is One’s Stage featuring four Singapore theatre veterans. Directed by Toy Factory artistic director Goh Boon Teck, watch as Yong Ser Pin, Liow Shi Suen, Johnny Ng and Ong Teck Lian wrestle with their dreams and struggles onstage as they tell their stories, alongside supporting cast members Timothy Wan, Neo Hai Bin, Jodi Chan and Liew Li Ting, in this powerful, celebratory performance.

Still on the music front, contemporary Chinese music group MUSA The Collective presents Reflections: An Interdisciplinary Concert, as they invite audiences to reflect on the human experience through eight musical movements in one multi-sensory evening of inspiration, realising that everything in it is ultimately impermanent. Featuring life stories, the intimate and paradoxical nuances of our lives are captured and put on display, illuminating a complex truth that is interwoven with contrasts and contradictions.

Paper Monkey Theatre’s The Universe According to Niu is the perfect show for families this ‘Niu’ (ox) year, as they bring the story of a bright young man using his intelligence to save a kingdom to life with their signature puppetry performance (with both modern and traditional puppetry). With life lessons about courage, resilience and the importance of doing the right thing at the right time, kids will also be able to learn all about ‘niu’-related Chinese idioms.

RAW Moves founder Ricky Sim presents Interspace, an immersive installation work that considers the spaces in between as we learn to navigate a socially distanced world. With how we’ve been living in a new reality with a heightened awareness of space for the past year, along with an increased sense of isolation, how do we adapt and go through our daily lives that have been changed fundamentally? In Interspace, participants are invited to enter a hypnotic space of awareness, discovery and assurance, meeting a lone socially distanced performer along the way, and free to experience the interplay in their own way and time, coming to terms and building trust with an unfamiliar environment.

The Finger Players will also finally stage Citizen X, after being forced to cancel the premiere due to the circuit breaker measures last year. Directed by Oliver Chong and starring Liu Xiaoyi, follow a hundred-year history of the great migration towards Nanyang from the 1920s, spanning tumultuous events in China’s history, including the war with Japan, the Civil War, Cultural Revolution and the eventual economic reforms and opening up of the country, all coming together with the story of a family.

Other highlights include a collaboration between chamber music ensembles re: mix and ACSO String Ensemble where they perform celebrated Chinese composer Huang Ruo’s A Dust In Time, which was written as a response to the ongoing pandemic. Tapping on technology and the digital capabilities the Esplanade has been developing over the last few months, Hong Kong sound artist GayBird will be virtually performing live with Singapore’s music ensemble Concordia Quartet in Not Only Music in Anticlockwise, a work which responds to the sounds of this era with dynamic images, music, space and installations. Finally, Singapore Mandopop duo The Freshman (Carrie Yeo and Chen Diya) have also created new material during this break for their first ever full-fledged concert That Escalated Quickly at the Esplanade Concert Hall.

This Chinese New Year, find joy and new things to celebrate and be hopeful for, as Huayi returns to fill your calendar with quality Chinese arts performances, live and digital, to wash away the old and welcome the Year of the Ox.

0 comments on “Preview: Huayi Festival 2021 by Esplanade – Theatres on the Bay”