In November 2020, Russian composer Vladimir Martynov’s Utopia Symphony made history as the first Singaporean-commissioned symphony to be recorded by the London Philharmonic Orchestra under their LPO label. Launched on major online music streaming services such as Spotify and iTunes, while in March 2021, the symphony is set to receive a live performance by the Metropolitan Festival Orchestra at the Esplanade.

First premiering in 2005 in Moscow, besides being the first recording of the symphony, this also marks a turning point for producers Michael Tay, director/founder of The Foundation for The Arts and Social Enterprise, who incubated and commissioned the project, and shows how venture capitalists can find a viable space in Singapore’s arts space. The symphony is also planned to evolve into a movement, “one million for Utopia”, as listeners are invited to rethink what it means to truly live in happiness, and how the arts can help achieve that.

Michael has also said that reviving it again is about promoting Martynov’s music, about promoting a piece of music that captures the strivings of many countries, or many peoples.  “In commissioning Vladimir Martynov to compose a symphony in 2004, I could not have foreseen a trajectory leading to this recording by the London Philharmonic Orchestra at the Abbey Road Studios. It was a leap of faith.” says Michael, who is also former Ambassador from the Republic of Singapore to the Russian Federation.

Conducted by Vladimir Jurowski, featuring soloist Jun Hong Loh on violin and the London Philharmonic Choir, Martynov was inspired after invited by Michael to visit Singapore for the first time, noting that “Singapore was a small country but a big idea”, and takes its text from Lao Tzu’s Tao Te Ching. Believing how the modern world leaves us ‘only with a childish faith in the magical power of repetition’, Michael also explains how despite its overarching spiritual, church-like feel, there are many modern elements to it as well, rich in history and beautiful in tonality. 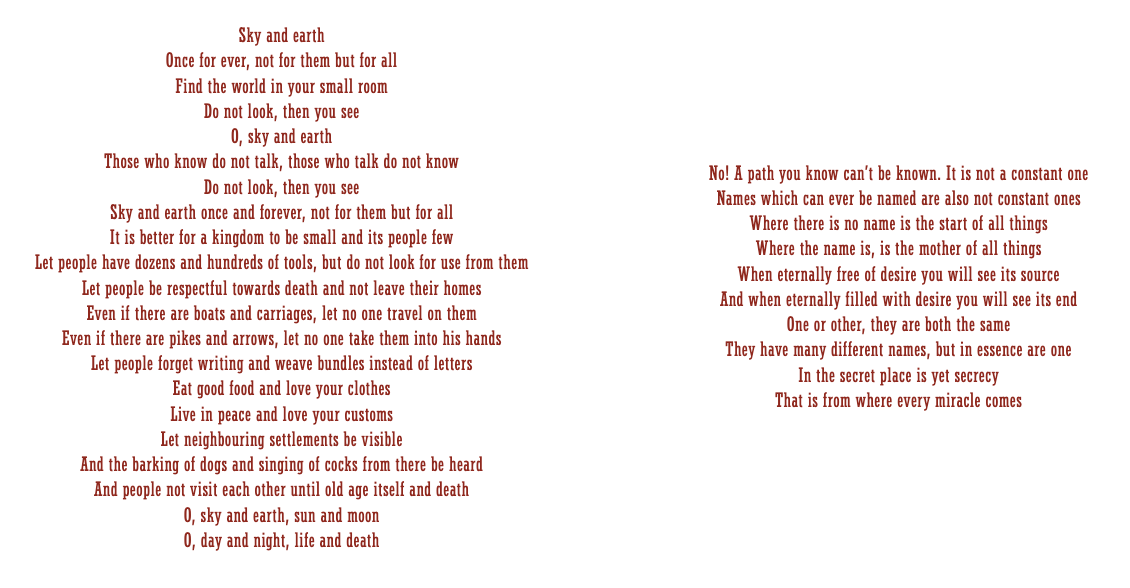 Listening to the piece across two parts, what strikes us first is the lyrics, allowing us to feel the spirit of the music, as it moves us to look towards the the sky and feel the earth, the claps and soaring voices celebrating life itself. Towards the middle of Part 1, we hear a violin solo that encapsulates what we have heard so far, almost like an instrumental response, repetitive and driving its core message of finding wonder all around us.

Moving towards a call and response segment, it seems to be more commanding, as a voice rhythmically instructs us on how to live life, the chorus echoing after the leader, as if a kingdom of citizens following their leader. We segue into a light xylophone solo, and it sounds almost like whispering, as we hear the planning,  the thinking, and the conversations. These give way to the trumpets and flute, where we can almost see the kingdom now taking shape, buildings rising up as the chorus returns, rejoicing at this majestic utopian metropolis they’ve built, ending Part 1 on a virtuosic finish.

Part 2 begins on a professional-sounding ‘hymn’, its lyrics almost absurd as it describes and reminds us of the unconstant, unpredictability of life. Heading into a classical love genre of music, we hear a beautiful conversation between the violins before heading into the chorus again. As the piano comes in, it sets the tone of the next stanza, as everything begins to settle down.

It seems we are now seeing much more clarity, in a moment we can all finally take a break and just listen, that feeling of having accomplished what you need to for the day, and finally kick your legs up and relax as you stare out at the window and just enjoy the passing scenes. That’s exactly the feeling I got listening to this piece, feeling peace as the chorus hummed alongside the violins and xylophone. As their voices came back in full swing, it seems almost like a recap of what we’ve gone through over the last hour, a glorious, poetic end to this orchestral masterpiece.

“A symphony dies if it’s not performed. If we don’t take this global – then it is a symphony for yourself. It means nothing again,” says Michael. “It is important that it enters into music history. The LPO recording is one step forward. When we started in 2005, we were moved and we wanted the world to hear it. It is a symphony for the common man, which is even more important in the global pandemic. The underlying vision of this symphony is a restoration of what it means to be human, striving to be better than ourselves even in a world full of anxiety and foreboding. We are honoured to have the LPO as part of this journey towards Utopia.”