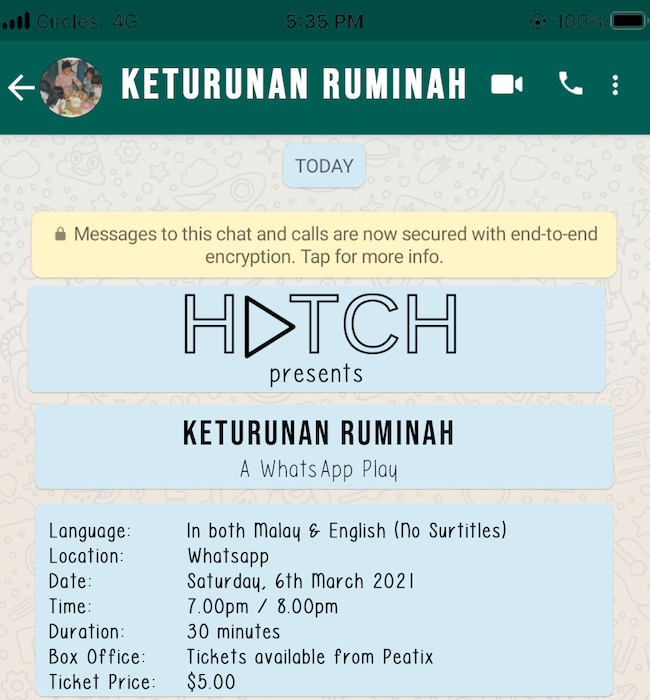 Drawing out the dramatic potential in a family WhatsApp group.

With live theatre still difficult to stage with all the restrictions COVID-19 has brought with it, experimentation in the arts remains rife, with various companies exploring new forms and means to create performances. Singapore theatre company Hatch Theatrics is the latest to try, with Keturunan Ruminah, a ‘play’ taking place entirely on WhatsApp.

Keturunan Ruminah invites audiences to one such group, as we observe all-too-familiar characters and phenomena we recognise from our own WhatsApp groups. Watching as an audience member (only the actors/admins are allowed to post messages), one of the first things we receive is a pre-recorded voice message, acting as a pre-show announcement that actually encourages us to use our devices and enjoy the ‘performance’ while multi-tasking or just sprawled on our beds.

Reminiscent of text-based adventures, we’re introduced to Ruminah’s family as they begin texting each other in real time, sending each other gifs, family photos, and audio messages. You’ve got older family members typing in caps, updates on upcoming events, and plenty of brutal honesty that comes from the familiarity of family, along with plenty of misspellings, colloquialisms and deleted messages that make the experience more realistic.

Things take a dramatic twist however, when it’s revealed that an elderly family member might be undergoing a health crisis, as she begins staring out windows and talking to her dead mother. Some speculate it’s a mental health issue from old age, and others believe it might even be a possession. It’s fascinating how quickly a simple issue like this can be misconstrued or blown out of proportion over WhatsApp, with a heated argument and miscommunication galore revealing the tenuous relationship this family shares.

As an experiment in form, Keturunan Ruminah is an unusual opportunity to get a glimpse into a Malay family’s dynamics over WhatsApp, able to capture an avalanche of emotions in just 30 minutes with how everything escalates so quickly. Even if you don’t have your eyes fixed on the screen the entire time, WhatsApp notifications ensure that you’ll remain engaged, checking back fairly often on how much the situation has deteriorated, and how they resolve their tussle.

If anything, this ‘performance’ proves that you can create drama out of anything – all you need is an appropriate and intriguing narrative. Whether as a piece on its own or as a part of a bigger project, Hatch Theatrics has shown the potential of WhatsApp as a viable medium for theatre, and left us curious as to how far artists might be able to take the form.