With the pandemic in place, school assembly programmes are becoming an increasingly tough sell for arts groups, who can no longer physically be present to perform for students. But for Bitesize Theatre, they’ve spent the last year innovating, adapting, and expanding a work that’s tailor-made for schools, with the release of their full-length online musical The Monster In The Mirror.

Written and directed by Terrance Tan, The Monster In The Mirror’s storyline makes it abundantly clear its target audience is the new generation of tweens and teens. Protagonist Jane (Sharon Sum) is a plain 16-year old student, but happy with her simple life, watching anime and hanging with bestie Rif (Seth Arri Azhar). But when she gets into a tiff with Hayley (Ashley New) her school’s biggest influencer, she awakens a side of her she never knew – a literal monster in the mirror.

With a makeover and newfound confidence, Jane uses her wits to clap back at Hayley’s bullying tendencies, and herself becomes the new It girl in school, taking the throne from Hayley as an influencer. While it starts off strong, by the time it reaches this point, The Monster In The Mirror becomes somewhat muddled in its message, and uncertain what exactly is the point it’s trying to get across, whether it’s the perils of social media or the issue of mental health. It is understandable that as a teenager, Jane faces a host of angst and problems, be it her fraught relationship with her single, beer aunty mother (Sharon Mah), or the one-sided relationship with Hayley’s ex Aaron (Marcus Chiau). But these end up distracting from the core focus of the play, where the simple premise is burdened by slew of characters and subplots it tries to introduce in its short span of 90 minutes.

Most problematic of all perhaps is the very presence of the titular ‘monster in the mirror’. Presented as a physical manifestation of Jane’s anxieties and doubts, the monster’s role is never clearly defined, making it hard to understand what exactly Andrea Joy Alingalan is trying to achieve with the character. At times a roadblock to Jane’s goals and at other times a means to defeat those in her way, the complicated nature of the monster is never fully explained even by the end, and often feels more like a secondary character than a lead. By its end, there is little reason to feel for her, despite the script insisting on making her and Jane’s relationship the climax of the performance, and refraining from providing closure for the mass of plot holes left wide open for the other characters. 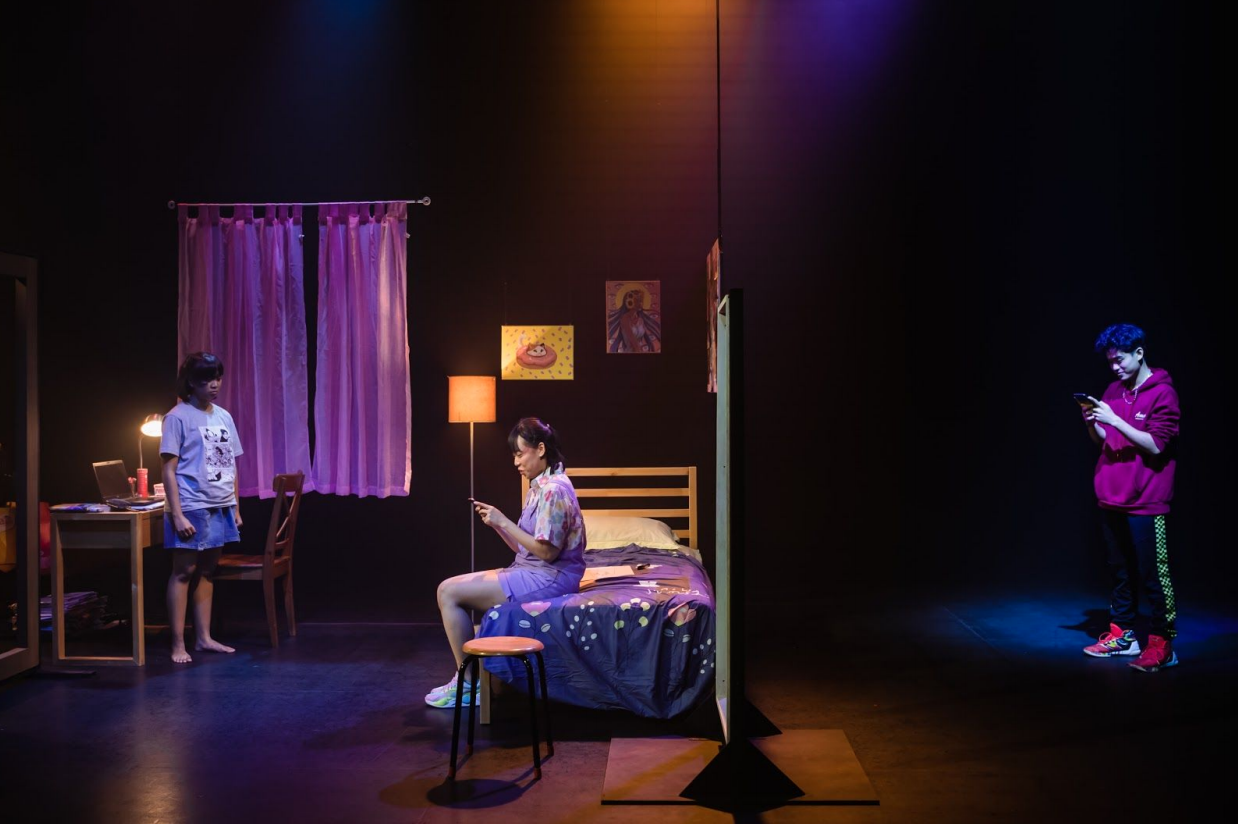 Still, as a musical, The Monster In The Mirror has plenty going for it. It’s hard not to get into the range of pop songs composed by Michelle Ler (with lyrics by Cheryl Chitty Tan). Whether it’s a rock record with guitar riffs, a soulful ballad, a hip hop-inspired rap battle, or even a techno club banger, each song works as a catchy standalone number, even if they don’t form as cohesive a soundtrack as the musical greats.

There’s a verve and energy to the cast that makes our protagonists easy to like as well, with good enunciation and strong commitment to their characters. It’s initially easy to root for Sharon Sum as Jane, as she brings out the character’s underdog nature, while as her rival, Ashley New embodies Hayley’s snooty demeanour, her face showcasing a constant expression of pride. Movement director Tan Rui Shan’s choreography is also befitting of the characters, with a particularly entertaining number by Terry Tan (as the green-haired comic relief ‘Fairy God Delivery Beng’) and his backup dancers.

Taking on the digital realm isn’t easy, and it is to Terrance Tan’s credit that he has directed his cast well to ensure it always feels dynamic, to make up for the lack of live-ness of an online stream. This sense of dynamism is also primarily thanks to director of photography Mark Wee, whose camerawork makes us feel like we’re right there with the cast, constantly moving and shifting onstage, while Alberta Wileo’s lighting helps enhance the mood and atmosphere in every scene. The frequent close-ups also offer no room for flaws, and the team has done a good job of editing and splicing the material together to give the illusion that it was filmed in a single smooth take, similar to how a live musical has no room for cuts and do-overs.

On the technical side of things, Bitesize Theatre has it all down, with their fresh cast of new faces to the scene, a well-made film, and good direction and music. It’s just a pity that it suffers from a script trying to tack on too many issues and ideas, weighing down an otherwise simple and clean plot.

The Monster In The Mirror is available online from 26th March to 4th April 2021. Tickets available from SISTIC

2 comments on “★★★☆☆ Review: The Monster In The Mirror by Bitesize Theatre and Gateway Arts”