Showing off local talents in this tribute to the French icon and celebrating Sing’theatre’s 15th anniversary.

Even outside of France, Edith Piaf established herself as a cultural icon, with her soulful, emotive chansons, and powerful vocals. But her life was never easy, faced with countless challenges that attempted to thwart her at every moment. It is thus a testament to her resilience that she made it through the tragedy, coming out stronger after surviving these incidents, one that is celebrated in the revival of Sing’theatre’s No Regrets: A Tribute to Edith Piaf.

While live performances have resumed, No Regrets marks a milestone as the first show to be back in Singapore theatre to feature a live band again, in this post-pandemic climate. That fact is key to Sing’theatre achieving that Parisian feel in the Alliance Francaise theatre, creating this bourgeoise atmosphere as the curtains open up, and we’re transported to a pleasant evening at a quaint French cafe. 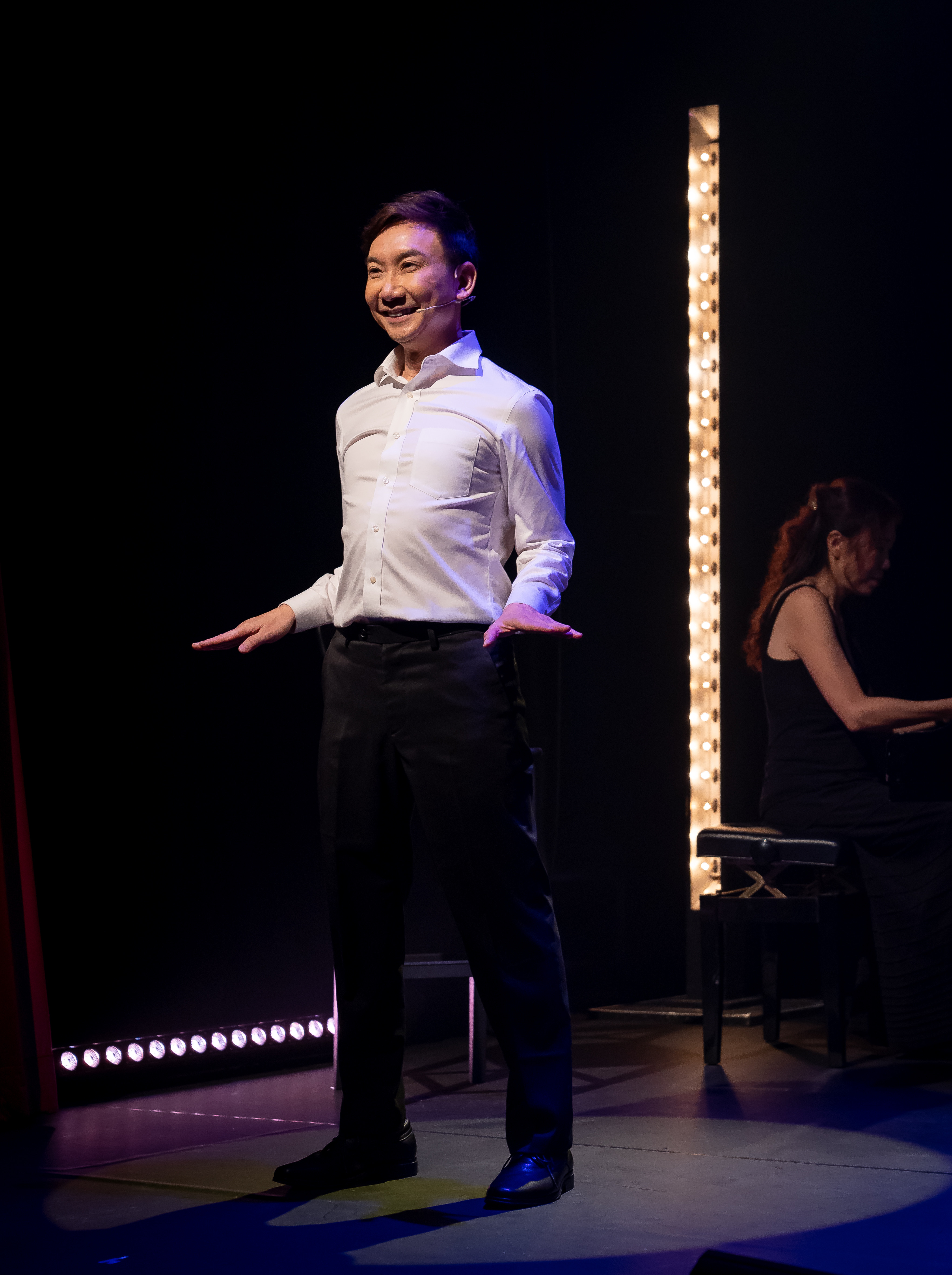 While primarily told through her most renowned songs, Piaf’s story is also narrated by cast member Hossan Leong, who first discovered Piaf during his time as a student, and fell in love with the French star and her music. There is plenty of love and respect in his voice as he provides anecdotes and snapshots of the key events in her life, throughout the show.

There’s no better number than the iconic ‘La Vie En Rose’ to start the show, reminding us all about her sheer stardom, and introducing us to our cast. Performer Maya Raisha comes on at first, before Mina Ellen Kaye and Rebekah Sangeetha Dorai join in, all showing off their vocal chops in the haunting number. When Hossan joins them, he adds a touch of masculinity to the three ladies’ voices, representing the many lovers that featured in her life. 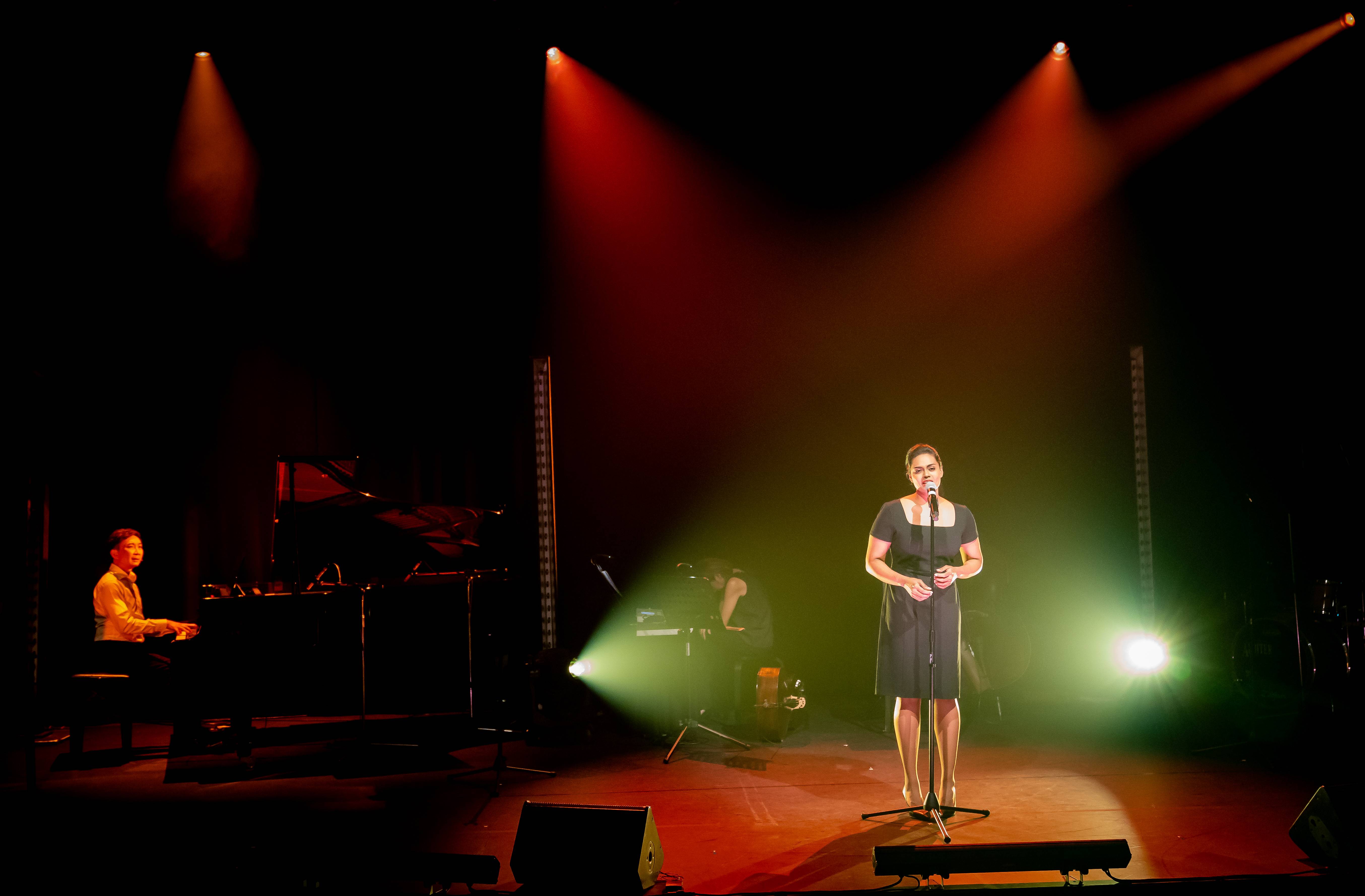 This naturally segues to Piaf’s humble beginnings, going from a beggar to be one of the highest paid stars in France. Here, Maya sings ‘Sous Le Ciel De Paris’, giving us an introduction to the 18-year old’s charm, as she delivers the song in a quintessentially Parisian voice, sultry and soulful. We can almost imagine ourselves in a smoky bar, with a cigar and whiskey in hand. 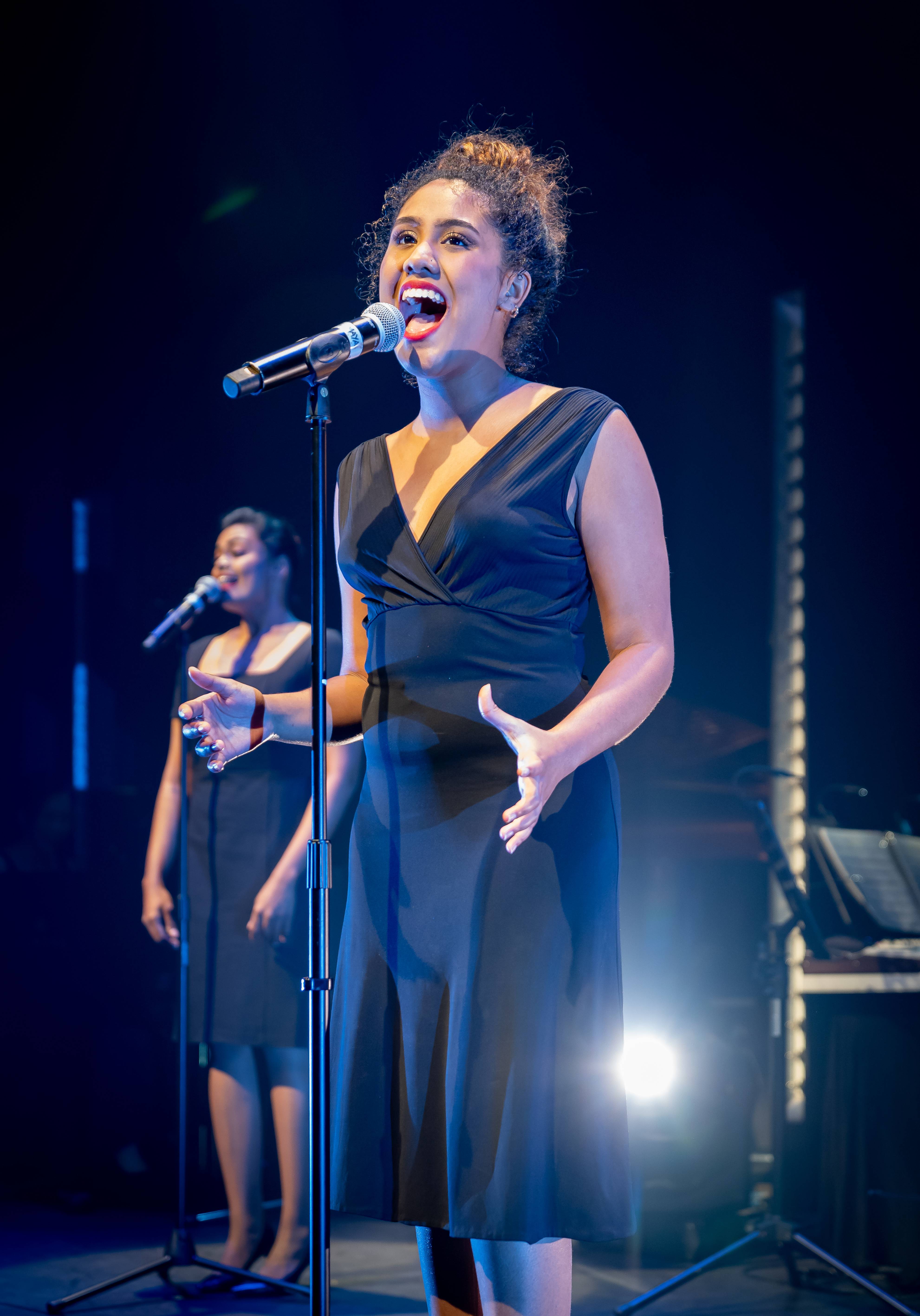 With such life experiences under her belt, it’s no wonder Piaf was able to imbue her songs with the depths of pain and the highs of happiness, with the latter coming through in ‘Hereuse’ (happy), as sung by Mina. Maya continues to keep the energy up with ‘La Foule’ (the crowd), bringing us into this world of pleasure and joy. 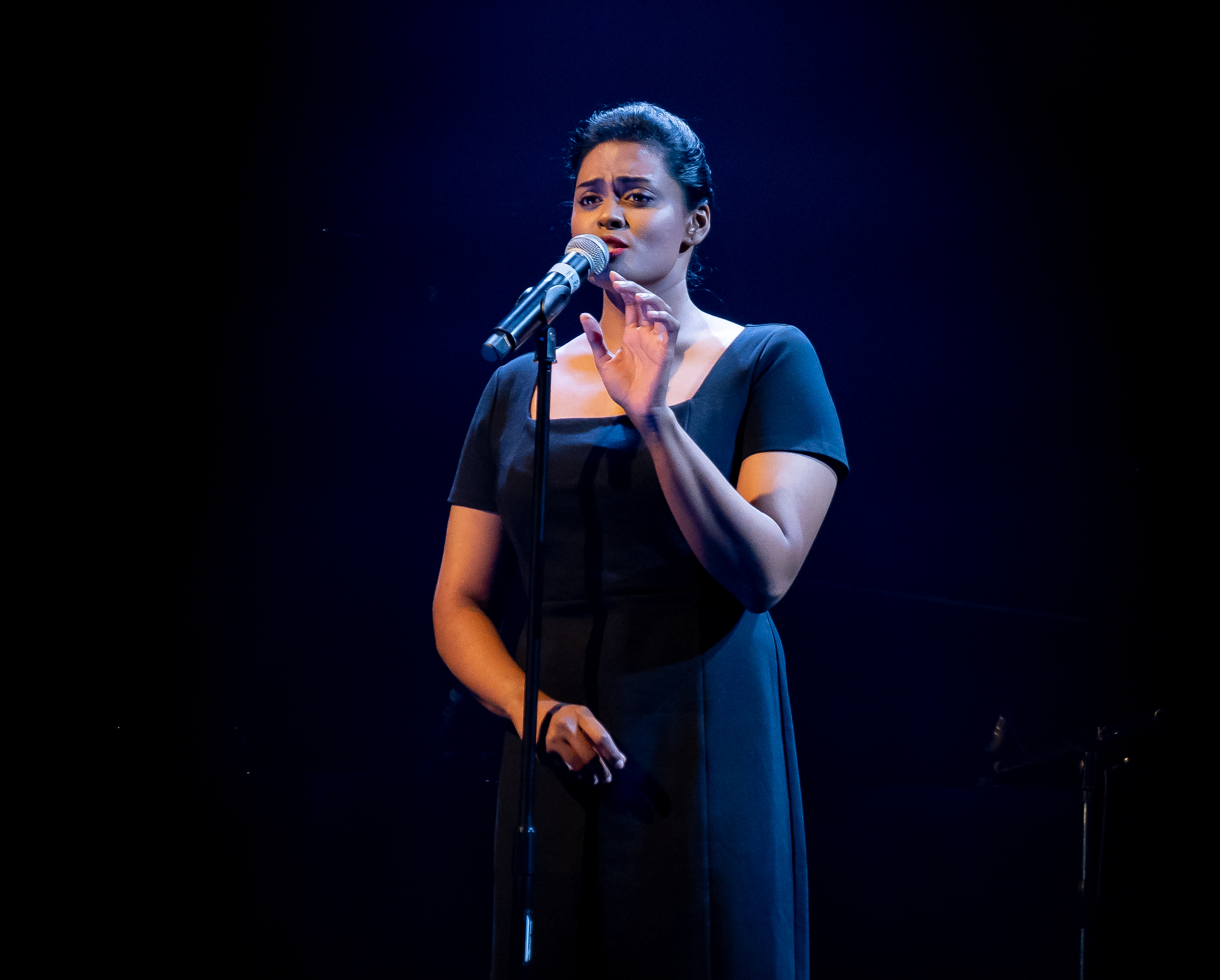 Sangeetha returns to change the mood, with ‘Les Amants d’un Jour’ (lovers one day), expressing a deep desire for something more as she shows off her vocal range and acting chops, portraying a disgruntled worker at a cheap cafe, always yearning for better things ahead. Taking to the piano, Hossan Leong sings ‘Les Feuilles Mortes’ (autumn leaves), and brings us on a journey, imagining the sight of red and gold leaves falling around us within the theatre. Sangeetha returns to join him, and with their strong execution and beautiful chemistry, their duet warmed all the hearts in the audience, and showcased how important relationships were to Edith Piaf. 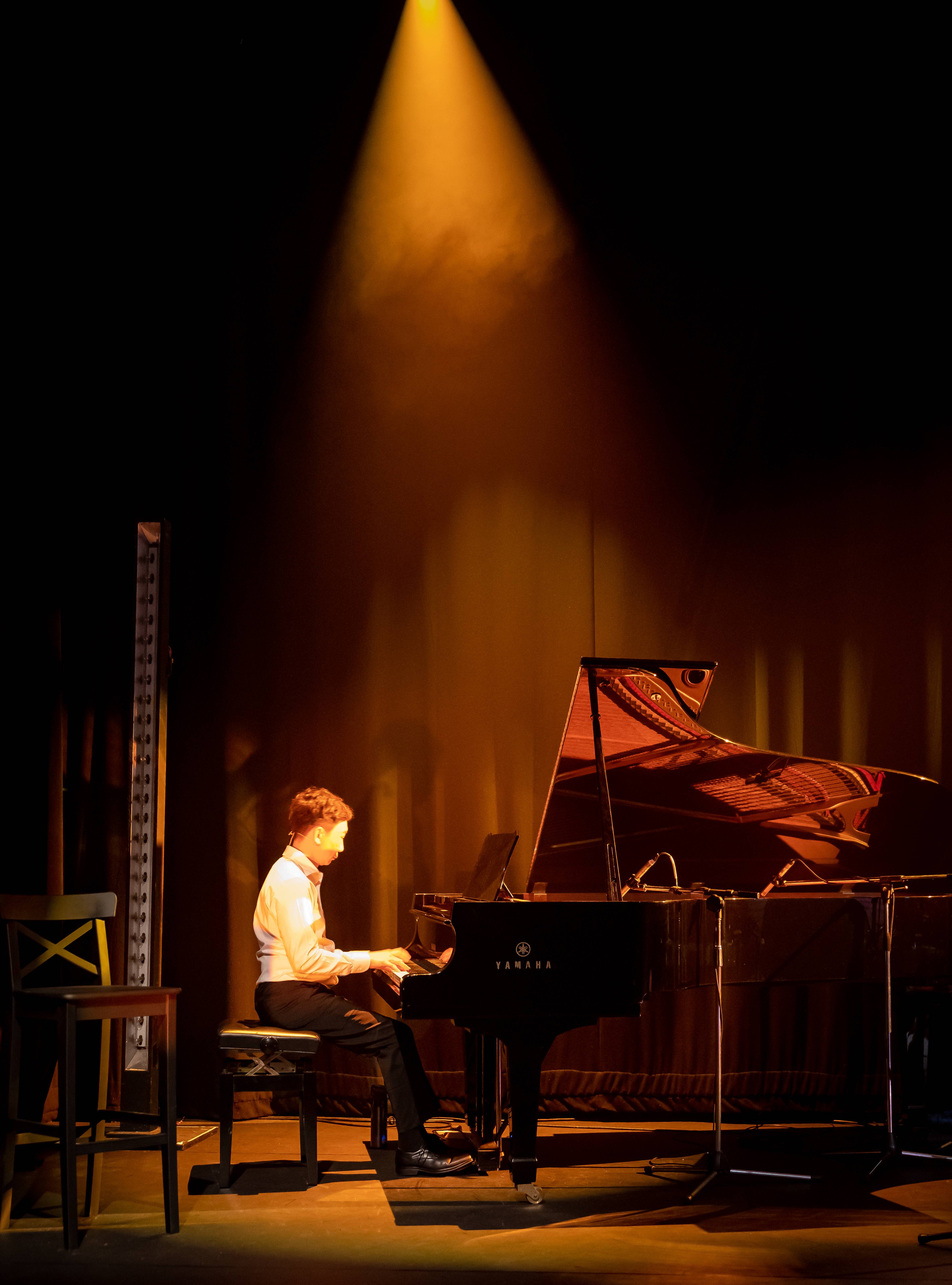 On that note, Hossan recalls how Piaf was abandoned by her own mother at birth, and again, emphasises the trials and tribulations she faced since the day she came into the world. And as the three ‘belles’ returned to the stage, they sang ‘The Three Bells’, their voices ringing clear and true, before Hossan went on to endow us with more of Piaf’s history, as a young girl singing on street corners for money. 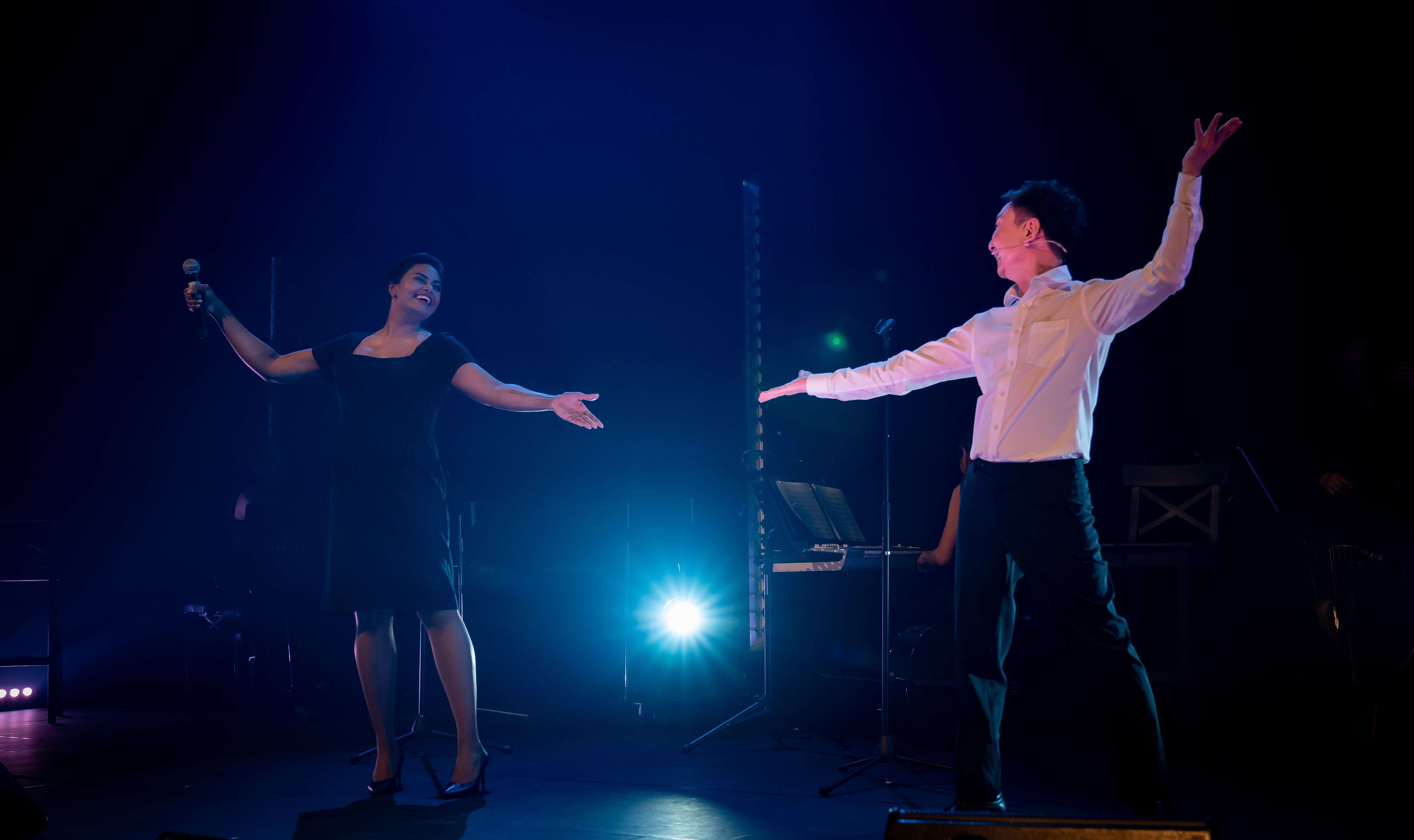 But after the struggle comes the light, with the three ladies performing Mon Manégé à Moi’ (a carousel for two). As a celebration of love, we saw the golden bulbs shining bright in the background, and it felt like they were on a carousel at the funfair, letting loose, having fun, and enjoying each other’s company. It is this same sense of familiarity and the power of relationships that comes through again in ‘À quoi ça sert l’amour?’ (what’s the point of love), a duet sung by Piaf and her husband Théo Sarapo, then 26 years old, compared to Piaf who was 20 years his senior. Once again coming together to perform this, Sangeetha and Hossan deliver on class and showmanship, with Hossan in particular embodying the infectious youthful energy of Théo, reaching out to the theatre as we felt Piaf’s love for her man. 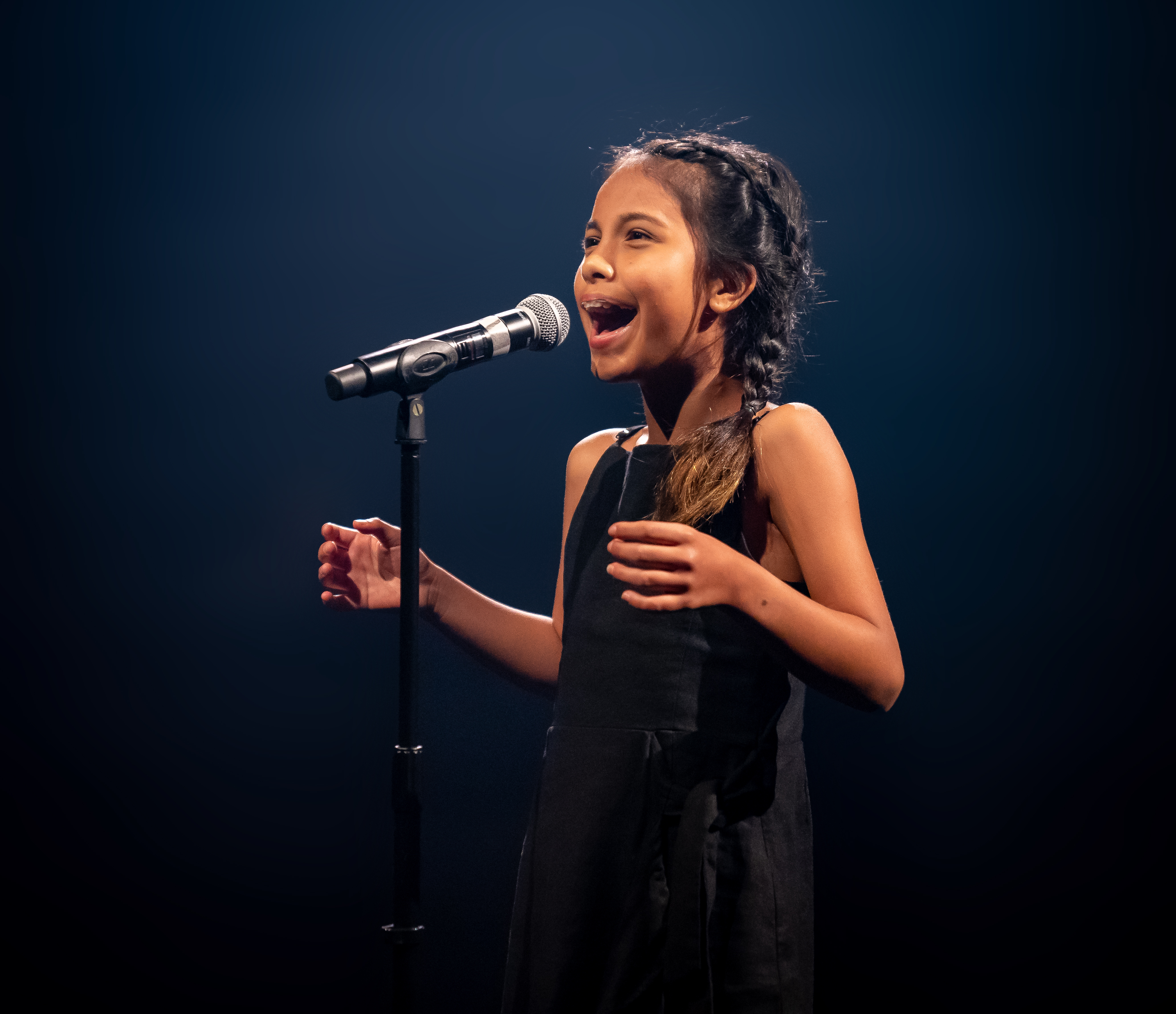 Sofia Poston was given her time in the spotlight, as she performed ‘La goualante du pauvre Jean’ (the ballad of poor old John), before Maya arrived onstage to perform ‘Milord’. Despite its technical demands, Maya executed it well, and showed her mastery over the material. Immediately after, she segues into ‘L’Homme à la Moto’ (‘Black Trousers and Motorcycle Boots’). Yet another demanding piece, it’s fantastic how Maya went into this at her best, singing with gusto, that we could imagine ourselves riding at high speed along the French Riviera, the wind whipping in our faces. 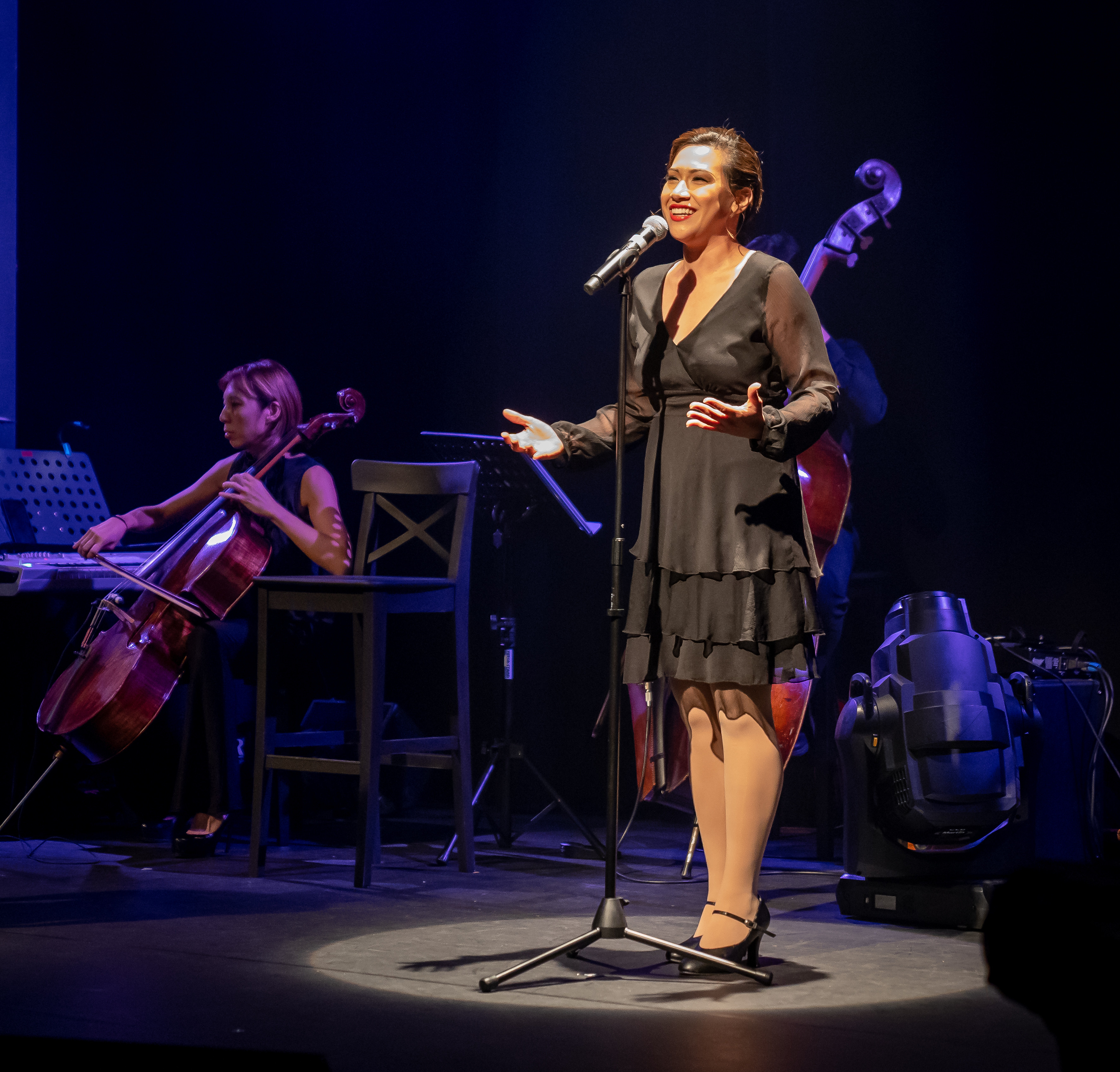 Once again, the mood seems to lift with the songs, as Mina performs ‘L’accordéoniste’ (the accordionist). Hearing an accordion playing in the background, Mina is evidently having fun with the piece, as she dances along, celebrating life while her voice soars with joy. 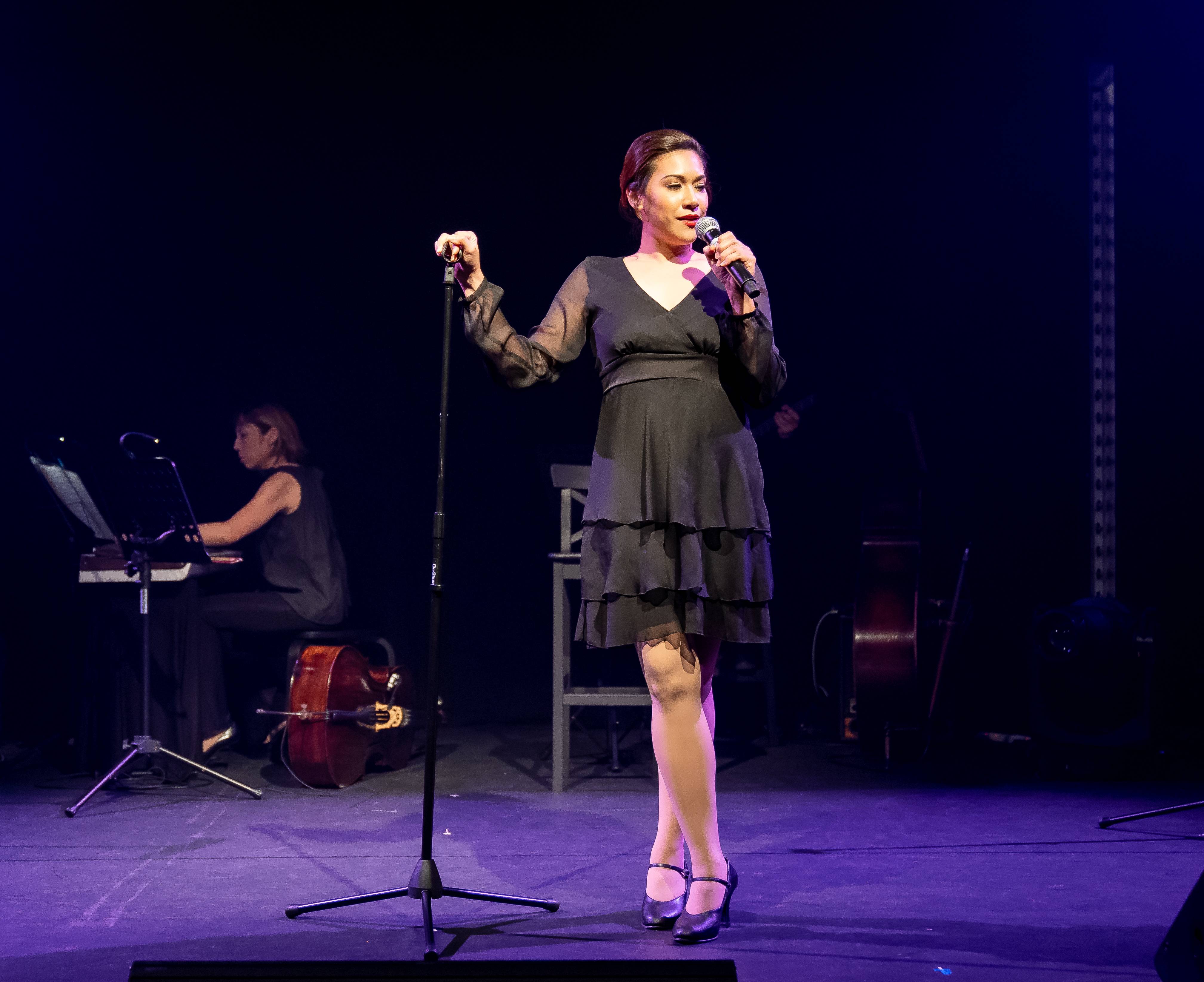 As Hossan returns, he explains the story of Piaf and her daughter Marcelle, and how much she loved her before she tragically died at the age of two. Hossan and Mina then perform ‘Les Amants’ – while it is ostensibly about two lovers, it becomes a song of yearning and passion, almost recalling the overflowing maternal love Piaf had for Marcelle. 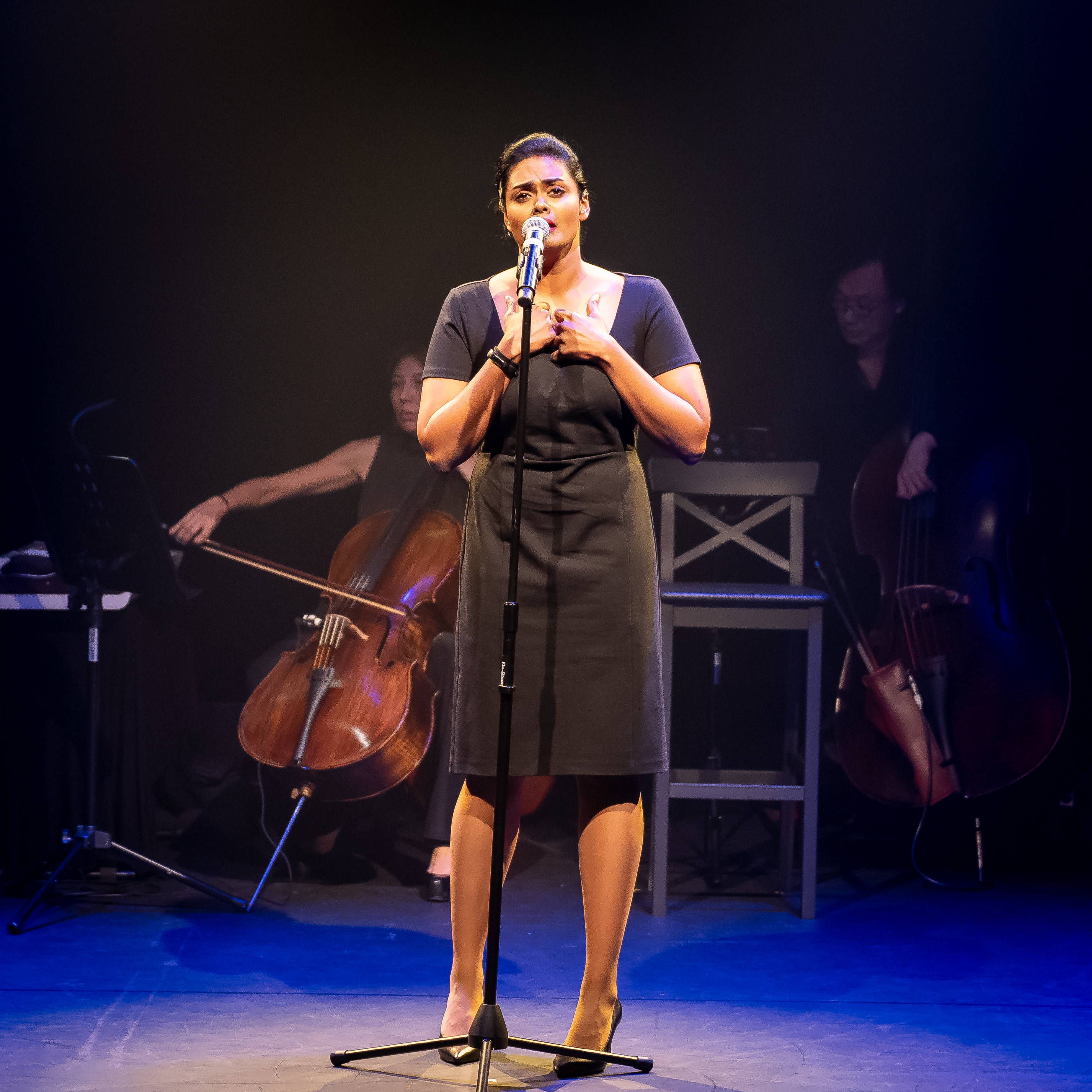 Segueing into ‘Mon Dieu’, Sangeetha takes to the stage and pours her soul into the performance. Stamping her own voice and personality onto this piece, she pushes herself to her limits, almost punishingly so as she considers the cruel nature of time. We reach the performance’s denouement, as the curtains reveal a portrait of Piaf. The singers turn to this portrait, and as a recording of Piaf’s ‘Hymn to Love’ plays, we feel the power of the performance as it recalls all that she’s been through, all her lovers and all the deaths she’s faced. Yet, through it all, she has no regrets, ending off with a final performance from our cast of her signature song of the same name. It seems that there will always be a light at the end of the tunnel keeping us going on in the darkest of days, as life goes on. 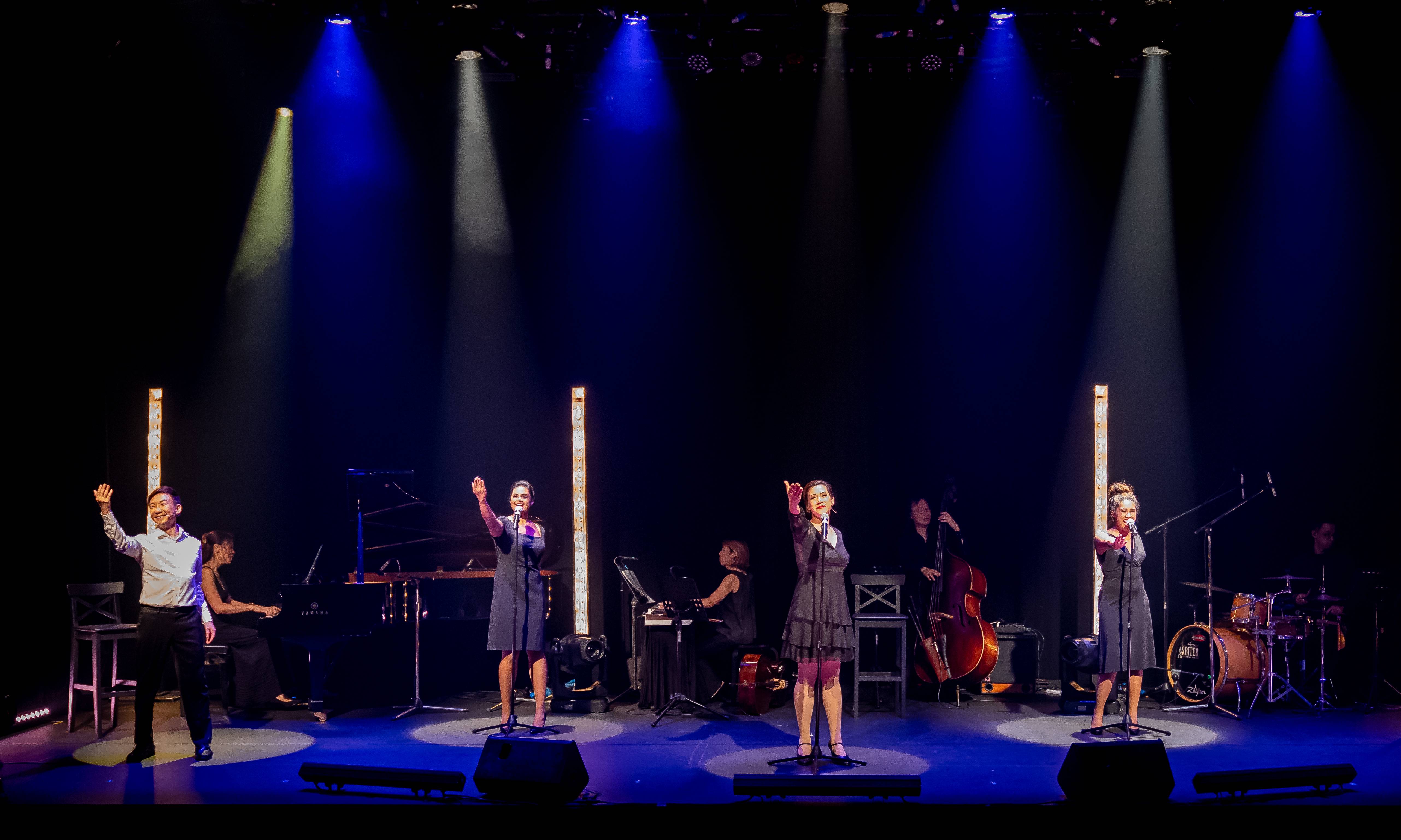 No Regrets: A Tribute to Edith Piaf played from 14th to 25th April 2021 at Alliance Francaise. Tickets available from SISTIC