If it’s one industry that’s seen spikes in consumption since the pandemic, it’s television. After all, it’s all we can do to indulge in a little escapism to forget the chaos of the world, something that period dramas do especially well, with their big, glamorous costumes, the posh accents, and really, just the sense that it’s somewhere far away from the here and now.

The latest period drama to join the ranks is BBC’s The Pursuit of Love, a romantic comedy-drama set in Europe between World Wars I and II. Adapted from Nancy Mitford’s novel of the same name, the three-part series follows the adventures and misadventures of the charismatic and fearless Linda Radlett (Lily James) and her best friend and cousin Fanny Logan (Emily Beecham). 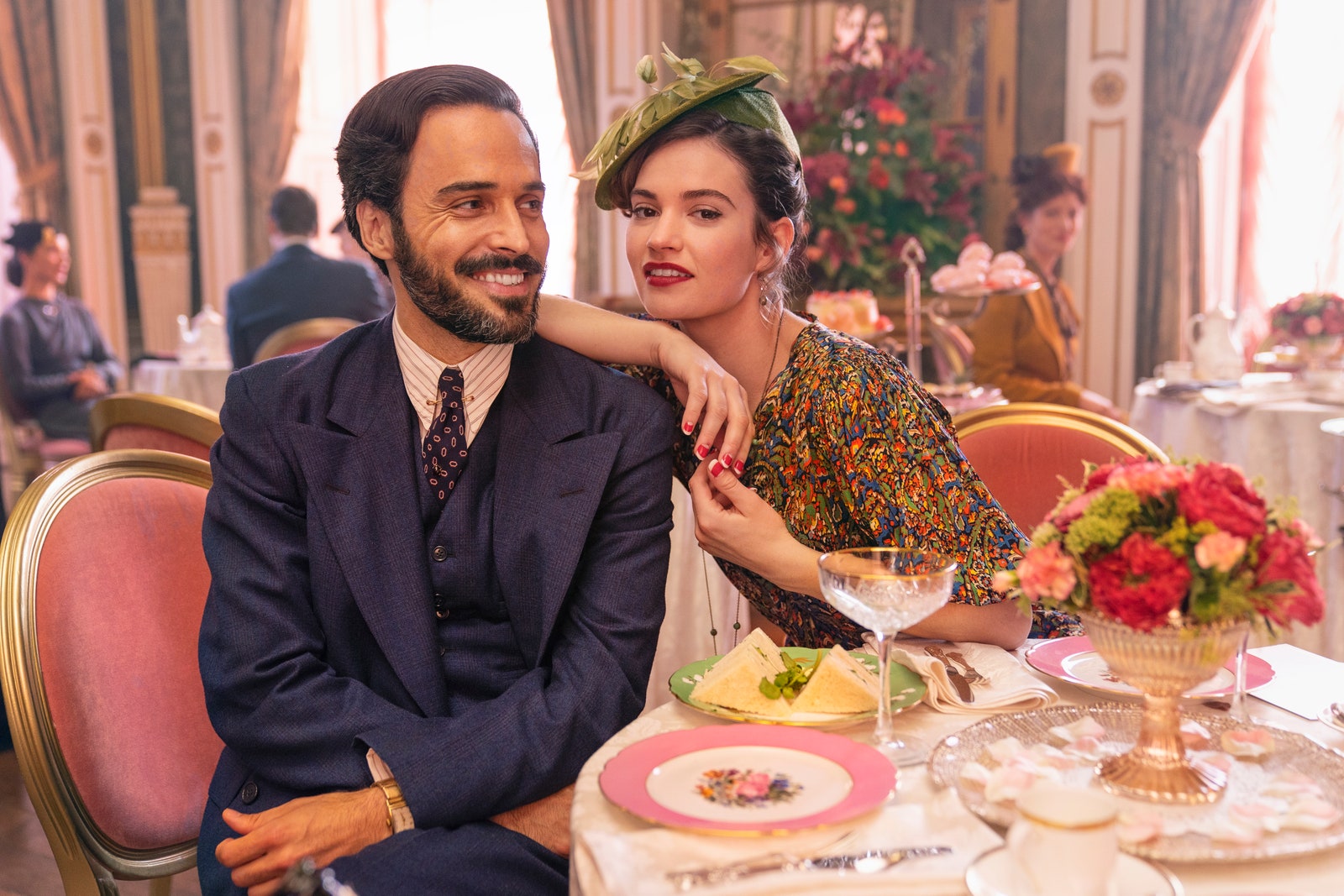 Written and directed by Emily Mortimer, it’s a fantastic and fun show – there are hints of Wes Anderson in the gorgeous cinematography and absurdism of the core dysfunctional family, the anachronisms of Bridgerton with its contemporary soundtrack, and above all, how ahead of their time our two protagonists seem, as they fight back against society’s expectations of women. Consumed by a desire for love and marriage, the two women hunt for an ideal husband, but their friendship is put to the test as Fanny settles for a steady life and Linda decides to follow her heart, to increasingly wild and outrageous places.

Speaking to both Lily James and Emily Beecham, we found out more about what went on behind-the-scenes of The Pursuit of Love, and what exactly it is that made this such a great project to work on. 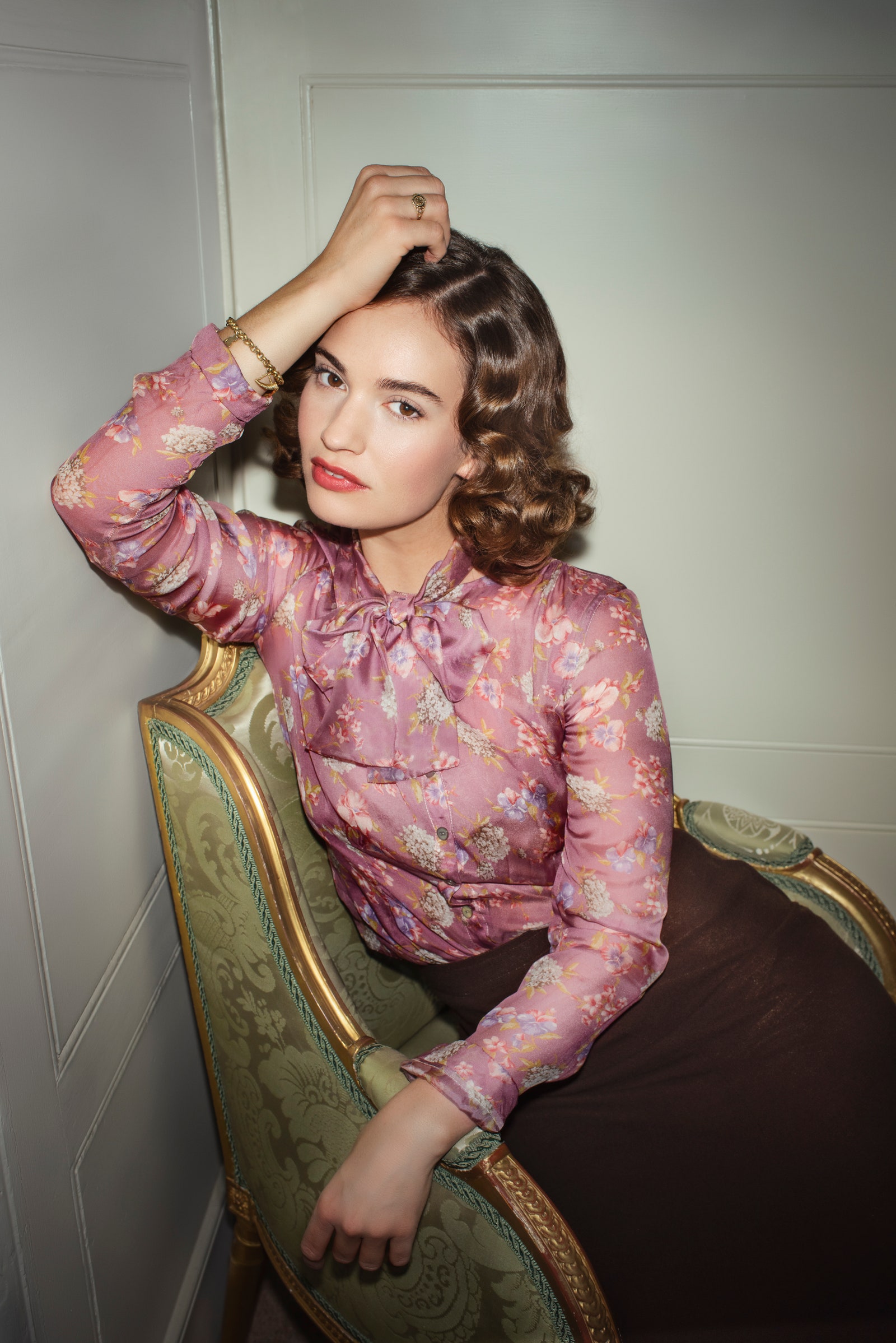 If it’s one thing that stood out to both stars, it’s how glamorous the entire experience was, from the unique appeal of shooting hunting scenes, to the high fashion costumes they donned on set.

“This was our costume designer’s first job as head designer, and what she came up with was out of this world,” says Emily. “Often, stepping into those clothes each day, it felt like we were on a runway. She drew a lot of inspiration from modern fashion, and combined them with inspiration from photos of real women from that time. Every detail, down to tiny elements like the neck scarf, help tell a story that supports our character.”

“Meanwhile, there’s this hunt scene we had to shoot, and I had to ride on horseback at the back of the hunt, ” she adds. “I’d ridden on horseback when I was younger, but I had to learn again for this show, and as terrifying as it was, it gave us such an adrenaline rush! There were so many animals on this show – like how there was this time where we got a bunch of tiny Rottweiler puppies, and they ended up falling asleep on me.” 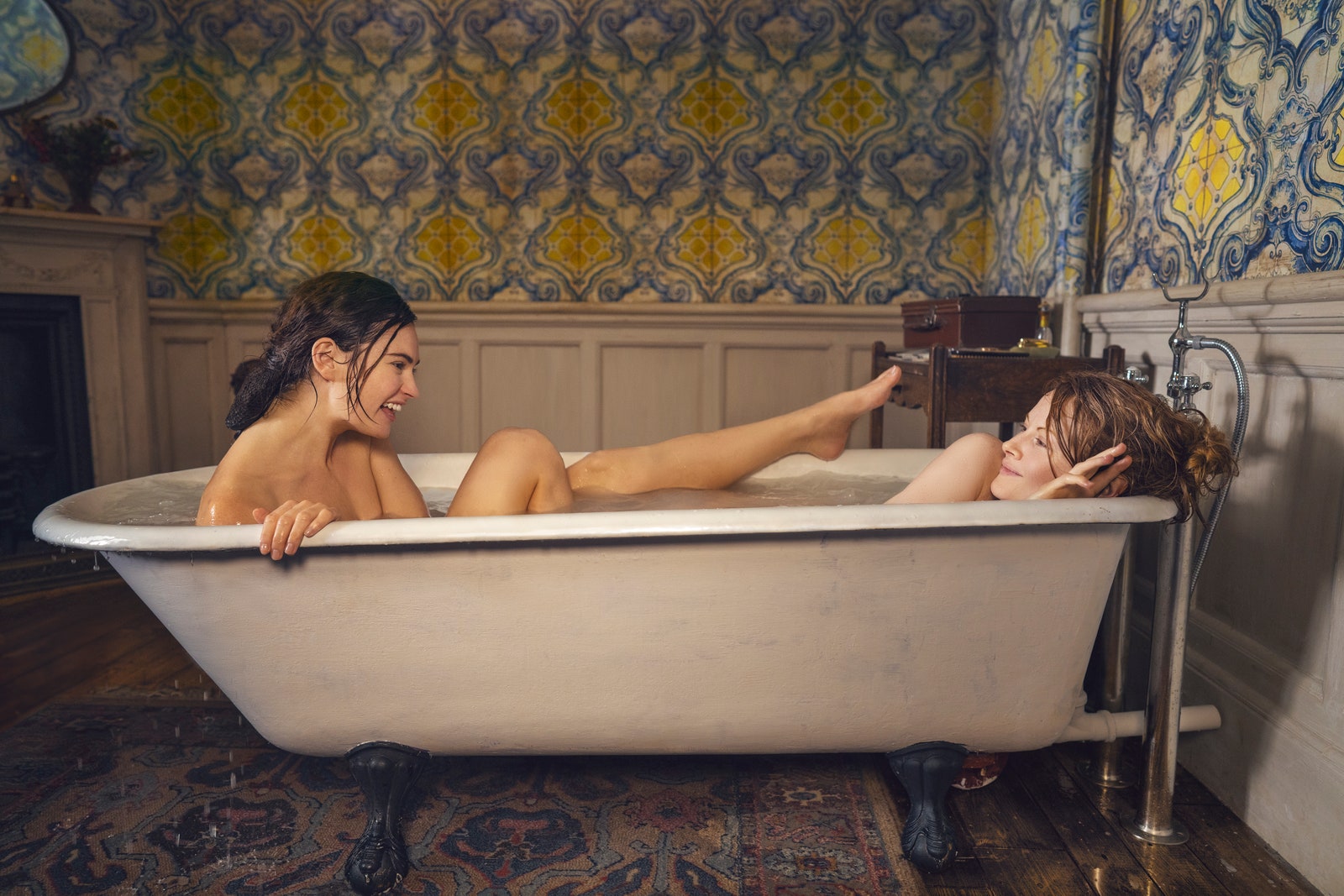 On building up their chemistry, Emily and Lily comment how easy it was to be on set with each other, despite never having worked together prior to this. “It was a very easy dynamic we had with each other,” says Emily. “And maybe that’s due to how there’s this raw honesty that the characters have deep down, where neither girl defines themselves by their femininity, as they go through this series trying to discover their identity and who they are.”

“We care so much about the source material, and how there were these two very different women we were representing,” says Lily. “We wanted to share all this, even as we explored, and wanted to do justice to Nancy Mitford’s work. We did a lot of research, and the cast were constantly trying to find the most important parts, and figure out how we wanted to tell it, and what to focus on. Because at the heart of it, it’s a very human story about friendship and love and about finding your own identity, while also pushing boundaries of what people thought about women, and we ended up bonding over that shared endeavour.” 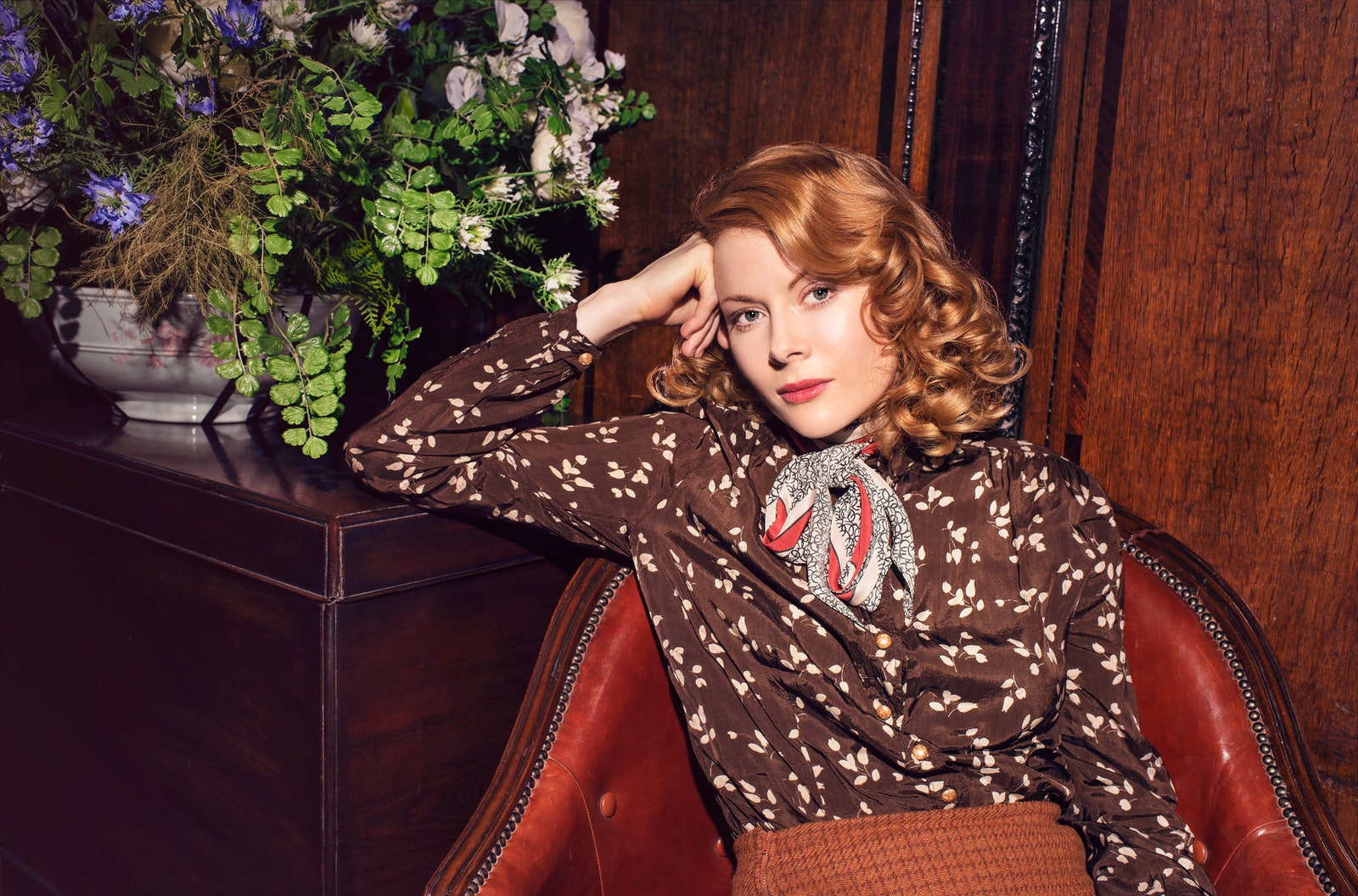 “Fanny and Linda have very different backgrounds, where Fanny has been abandoned by her mother, who was vilified by society for being loose, and she’s trying to find herself during the show,” adds Emily. “There’s a challenge to that, in wanting to be taken seriously. There’s a lot of constraints and judgments that were much tighter during that time, yet some of these still persist and remain relatable even today.”

In working with writer-director-actor Emily Mortimer, both cast members have nothing but praise for the experience. “Working with Emily Mortimer has been one of the greatest, most honest experiences I’ve had on set,” says Lily. “Everything was about discovery and there was just so much generosity from her. She comes on set and meets you with her spirit and her heart, and everyone fell in love with how she treats everyone with respect, and how she came on knowing exactly what she wanted. At the same time, I’ve never felt more free as an actor, it was phenomenal how much she’s supported this experience of us exploring this story.”

“Mortimer has always been known for her honesty, something I knew before meeting her,” adds Emily. “We have always maintained very open discussions, as we explored the complexities and change for these two girls’ friendship.” 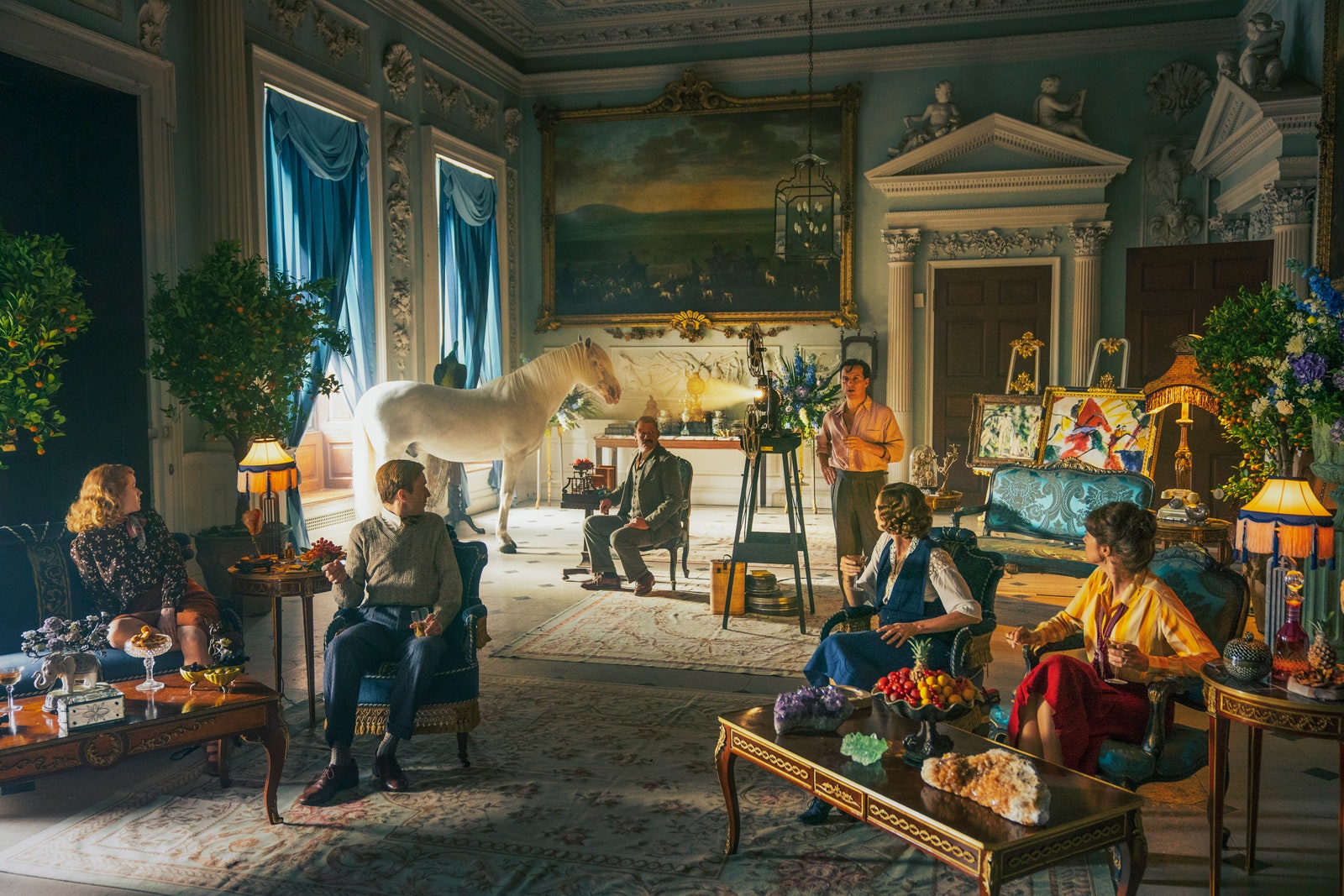 And as ‘vintage’ as the series is, both cast members believe that Mitford’s story is timeless, and still relevant for today’s viewers. “Mitford was very witty and funny, and her writing was very subversive too – there’s a lot of bravery and honesty and satire to her writing,” says Emily. “I felt like a lot of it spoke to the core of issues I fee, like as a woman, what is femininity? There’s so much conflict surrounding that in society, and then there’s the whole issue of class and Linda’s insular aristocratic family, and this need to break out, travel, and meet people from other walks of life. All of that is still so relevant in today’s times.”

“There’s definitely a huge element of escapism, and I’d say that this show is going to cheer people up after going through such a difficult year,” says Emily. “It was a joy for us to make, and we’re very privileged and lucky to be transported to and play out this Nancy Mitford story.

“At the heart of the piece is so much and struggle of finding the self, and finding one’s place in the world,” says Lily. “But at the same time, it’s also hilarious and very funny. It’s just this explosion of a brave bohemian world where daughters are fighting against the status quo as they’re catapulted into the real world, and every word from Mitford’s novel has been so well-interpreted and given life, something I’ve never seen any writer or director do so vividly with any material before.”

The Pursuit of Love premieres 10th May 2021. Available on BBC First (StarHub Channel 502) and BBC Player.

2 comments on “Television Time: An Interview with Lily James and Emily Beecham, stars of BBC’s The Pursuit of Love”