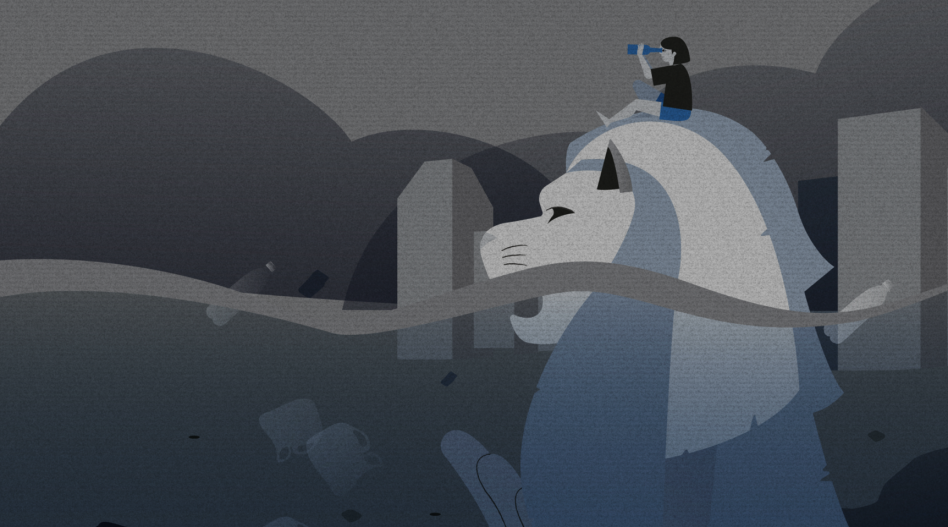 Singapore’s waters are teeming with beautiful life, but this ecosystem is under immediate threat. Furthermore, the link between ocean and climate has been overlooked. Only 0.56% of all philanthropic funding is channelled to the ocean, making the ocean the least funded Sustainable Development Goal. In line with the Singapore government’s recent commitments towards marine protection, Peering Into Our Future: A Series of Unfortunate Short Stories is a first-of-its-kind initiative that aims to use the power of creative storytelling to educate and compel people towards action.

Penned by five acclaimed local authors, poets, and playwrights – Suffian Hakim, Joshua Ip, Amanda Lee Koe, Pooja Nansi, and Neo Xiaoyun – the stories hint at various possibilities of a not-so-distant dystopian future, with the aim of education and to inspire individuals to champion the cause of ocean conservation.

From a talking Merlion to a family out for a day at the aquarium to a wife on the verge of an emotional breakdown, these stories leverage the power of creative storytelling to narrate the chilling, mysterious and darkly humorous fictional future that awaits us if action is not taken to care for our waters. In “OUR GIRL” by Amanda Lee Koe, plucky hawksbill turtle returns to Singapore after spending time with her mate. Pooja Nansi’s “Wherever we look, we will find them.” sees a lonely wife reflecting on her life and marriage after watching a documentary about the dangers of microplastics. “Sweet Sixteen” by Neo Xiaoyun sees thoughtful, ocean-loving Janice receiving a shocking gift on her sixteenth birthday. Suffian Hakim’s “The Last Tales of the Merlion” imagines rising sea levels threatening to overwhelm most of the world, and leaves the last Merlion to tell the remaining Singaporeans three stories. Finally, “WaterWorld” by Joshua Ip sees a family outing to WaterWorld highlight more than generational divides.

Reflecting on the need for small acts even when a problem looms so large, Pooja Nansi said, “I often think about our place in the family of things. We have one life and one earth and only a set number of years to make it a better place for the next generation. If that is overwhelming, we can just pick one actionable change in our lives so that we can still make a difference.”

Peering Into Our Future will officially be launched on 8 September 2022. This event will be a prelude to Coastal Natives’ Waves of Change Festival at the ArtScience Museum. From the 10th September – 9th October, the public is invited to learn about amazing marine life, the devastating impacts of global warming and how we can ally with the ocean to combat climate change through community and activism.

Kathlyn Tan, founder of Coastal Natives shared, “Not many Singaporeans have personally experienced the ocean’s magic even though we are surrounded by rich marine biodiversity. For instance, Marina at Keppel Bay has a city reef teeming with marine life such as seahorses and critically endangered hawksbill turtles. Coastal Natives was founded to attract new audiences to ocean conservation and what better way to do so through the power of art and stories. This initiative to embolden Singaporeans to action is more important than ever.”

Dr. Toh Tai Chong, co-founder of Our Singapore Reefs said, “These stories are not just fiction, but a very possible near-reality that we should be worried about, especially as Singapore is so closely nestled in surrounding marine ecosystems. We are experiencing unprecedented levels of ocean warming and acidification with real consequences for Singaporeans. Our sea levels could rise by 1.1m, with greater likelihood of monsoons and mass mortality events of marine ecosystems. Our government is already taking proactive steps towards ocean conservation laid out in Singapore Green Plan 2030, but community action needs to go hand-in-hand with this in order to drive tangible change”

Peering Into Our Future hopes to not only entertain, but move people and inspire action such as creating advocacy in communities, at home and in workplaces. Ocean conservation champions recruited via the campaign will be activated via partner organisations to take action by participating in beach and dive clean-ups, among other efforts. The campaign is supported by local NGOs, Coastal Natives , Our Singapore Reefs as well as Ocean Purpose Project, and led by award-winning agency Mutant Communications as part of their new ESG initiative.

Peering Into Our Future was officially launched on 8th September 2022, as part of Coastal Natives’ Waves of Change Festival at the ArtScience Museum, which runs from 10th September to 9th October 2022. Read the collection here. More information available here

0 comments on “By The Book: ‘Peering Into The Future’ gathers acclaimed Singaporean Writers to pen stories of the Dystopian Future of Our Oceans”