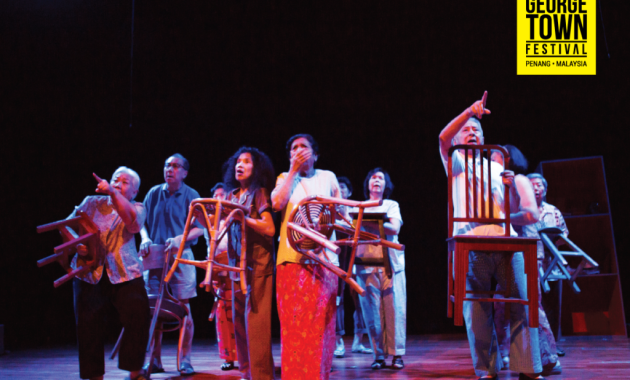 George Town Festival 2019: An Interview with The Glowers Drama Group

PENANG, MALAYSIA – It’s not every day you get to see a Singaporean theatre company perform overseas, let alone one made entirely of older actors and crew members. But with the […]

PENANG, MALAYSIA – Temples may be sacred ground, but for artist Lee Mok Yee, they also double as a gallery, specifically for his latest exhibition Superstition II. Inspired by their interiors and significance, […]

Change is the only constant. PENANG, MALAYSIA – While most modern city-dwellers have long gotten used to the constant march of progress as our cityscape moves forth, there remain those […]

LONDON – Opening The Bunker’s Autumn Season, This is Black will premiere theatre productions by four new and exciting Black writers across an alternating double-bill. Exploring identity, family relationships and universal […]

In London’s (Off) West End 2019: Femme Fatale by Fireraisers at Omnibus Theatre

LONDON – 1968. New York. Nico, singer with The Velvet Underground and Andy Warhol’s Superstar, waits to shoot his latest movie when her Chelsea Hotel room is invaded by radical feminist […]

Staging the painful truth of forced marriage in Afghanistan.  PENANG, MALAYSIA – Performed by Parastoo Theatre Team, a group of Afghan refugees who are based in Malaysia, Screaming in Silence uses the form […]

LONDON – After bringing their interactive installation Dear Cardboard Kitchen to Singapore in May, London based Singapore company FK Co-Lab has further developed the installation into a full length theatre production, set […]

LONDON – Tête à Tête: The Opera Festival returns for its twelfth iteration this July, giving the festival’s alumni and debutantes platform to experiment with unconventional operatic forms which may, […]

PENANG, MALAYSIA – Back for its 10th edition this weekend, the annual George Town Festival returns with a promise to deliver an  entirely new way of experiencing arts to everyone. This year, […]

EDINBURGH –  Few people are completely in the dark about English playwright/poet William Shakespeare. But did you know about the lost years of his life? Written and directed by Victoria Baumgartner, Will tells […]

LONDON – This autumn, Blackeyed Theatre brings to the stage a thrilling new adaptation of Charlotte Brontë’s masterpiece Jane Eyre. Adapted by Nick Lane, this world premiere embarks on a major […]

Hong Kong 2019: A Dream Like A Dream by Hong Kong Repertory Theatre (Preview)

“In a story, someone had a dream. In that Dream, someone told a story.” HONG KONG – Considered one of the most celebrated pieces of modern Chinese theatre, Hong Kong Repertory […]

LONDON – A brand new UK production of smash hit musical Sister Act has been announced by producers Jamie Wilson and Whoopi Goldberg (yes, THE Whoopi Goldberg of from the original film). Opening at […]

LONDON – Based on Jules Verne’s classic adventure novel Around the World in 80 Days, Fire Hazard Games are staging a new, high energy urban adventure for adults in central London! […]

Touring The UK 2019: Build a Rocket by Tara Finney Productions

LONDON –  Following international acclaim and an award-winning run at the Adelaide Fringe Festival, Build A Rocket, about a young mother from Scarborough, returns to embark on an extensive UK tour. […]

LONDON –  Andrew Lloyd Webber and Cameron Mackintosh have announce a brand new 2020 UK and Ireland tour of world famous The Phantom of the Opera, with stops at The Curve, Leicester, Manchester […]