W!ld Rice has always been known to be one of the glitziest theatre companies in Singapore, but with its restaging of Harvey Fierstein’s La Cage Aux Folles, it can safely walk away with the title of the brightest – what with its one THOUSAND lightbulb set, framing the stage in a cage pattern reflecting the translation of the play’s title (the “caged madwoman”). But the set wasn’t the only thing sparkling tonight at the Victoria Theatre; La Cage is a musical that perfectly encapsulates the W!ld Rice spirit of putting on huge, star-studded shows with stories that continue to touch the heart and brim with important social messages.

Last seen winning the 2013 Life! Theatre Award for Production of the Year, La Cage stars W!ld Rice artistic director Ivan Heng in the lead role as Albin – a family man by day, lascivious drag extraordinaire Zaza by night, performing on the fabulous Tanjong Pagar’s nightlife circuit at world famous cabaret La Cage. He and partner George (Malaysia’s Sean Ghazi) live a relatively quiet life until their son Jonathan (Aaron Khaled) decides to marry Anne (Mae Eliessa), the daughter of conservative politician Mr C.K. Tan (Darius Tan) and wife Mrs C.K. Tan (Jo Tan), archenemies of the Tanjong Pagar nightlife and hell bent on shutting it down. When Jonathan brings his future in-laws home to meet the family, the fabulous couple are forced to play it straight and keep the boas and heels under lock and key, but everyone knows that you can’t keep a queen caged up for long…

As mentioned, W!ld Rice excels at setting up the glitz and glam factor, particularly in Eucien Chia’s elaborate set. When the show started off, the set sleekly depicted the Singapore skyline before morphing into a colourful stage, ripe for an energetic opening number from the Cagelles (Amin Alifin, Ryan Ang, Gino Babagay, Andy Benjamin Cai, Ana Carazo, Tiffany Tallon and Yang Weicheng), setting the tone for the rest of the night. Frederick Lee’s various astounding, over the top costumes called back to the golden age of Hollywood musicals and Madonna concerts, with a myriad of vibrant shades of feathered and glittery costumes dazzling audiences as each of the Cagelles, and of course, Ivan Heng himself, performed their well rehearsed La Cage routines (choreographed by Lisa Keegan).  Ivan Heng was a real sight to behold everytime he appeared onstage, with countless flattering gowns that helped emphasise his curvature and really created the illusion of being a woman, alongside The Make Up Room and Ashley Lim’s diva-tastic makeup and hair respectively. We won’t spoil it for you but even our national flower gets its moment in the limelight when it makes an astounding (and hilarious) appearance during the show!

As the curtains drew to a close in the opening scenes, the larger than life Las Vegas style stage gave way to backstage drama stirred up, highlighting the nightmares of the entertainment industry and the growing fatigue from doing the same show night after night. This was balanced out by the introduction of Hossan Leong as an ambitious assistant and wannabe star, playing the role to perfection and evoking laughs from the audience.

But of course, the crux of the show lies in the relationship between Zaza and George. Ivan Heng and Sean Ghazi share a wonderful chemistry onstage that really portrays their characters as a loving couple, evident in scenes like how Zaza and  George would go to the coffee shop to have their usual kopi and beer in the mornings, despite their involvement in such a classy club.

It’s easy to see why Ivan Heng is often the face, the heart and soul of W!ld Rice, bringing to his performance the same gravitas in its emotional scenes as he excels in the high energy, spectacular numbers. In one scene, Zaza didn’t want to go on stage, but her husband encouraged her to go on anyway, and she had no choice but to keep the show running despite her fatigue. Sitting in front of the mirror, doing her make up, and lamenting about her life and who she is and being true to herself in “Mascara”, Ivan Heng brought out every subtle nuance and there was a wave of emotion that emanated from his performance. La Cage’s most outstanding number remains Zaza’s ‘I Am What I Am’ as she asserts her identity in the face of everything else, and Ivan Heng’s powerful rendition sent a strong message of pride in being who you are. 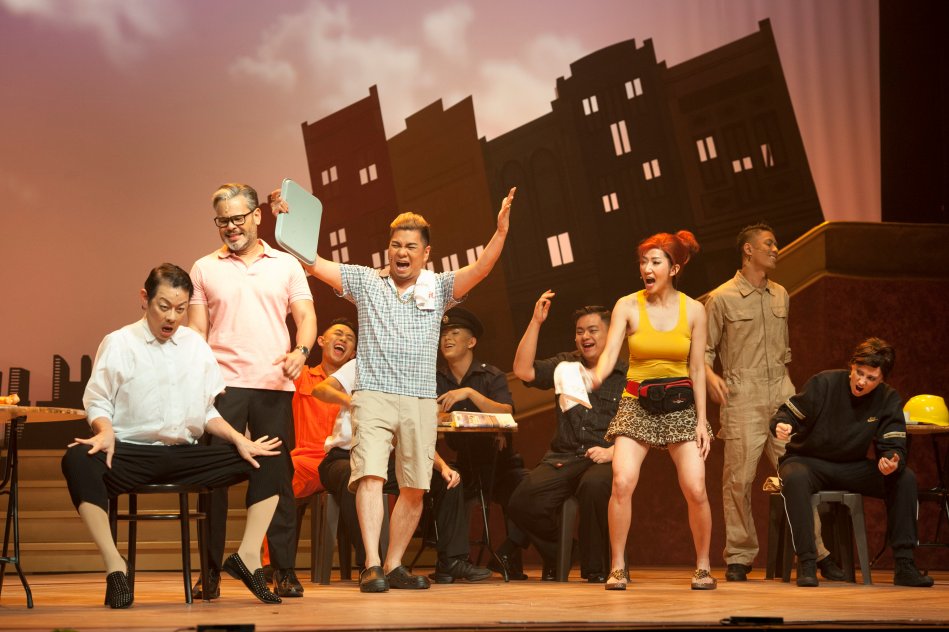 Of course, this being W!ld Rice, the other cast members are no slouch either. Aaron Khaled impressed us in his role as Angel in Pangdemonium’s Rent last year, but in La Cage, now plays Albin and George’s son, a heartthrob with a beautiful voice. Khaled really shows his versatility in roles with his performance, winning hearts with his golden boy onstage persona and winsome smile.  Dwayne Lau’s portrayal of the campy, sleazy, character “Letchmi Yentertain-Yu” with a whip in hand brought on the laughs as well, and Erwin Shah Ismail as production manager of La Cage always came in at the right moment to elevate the laughter and enjoyment of the scene. Meanwhile, Jo Tan as Mrs C.K. Tan plays a typical China beer lady who tries to be more local to blend in to Singapore, but always let slip her Chinese national roots, leading to some comic results, yet believable at the same time.

In the second act, there was no loss in pace or energy, and Zaza/Albin was tasked to play it straight for the impending meeting with Anne’s parents. Coffeeshop Uncle Ah Seng (Darius Tan) teaches Zaza how to man up in a hilarious number (“Masculinity”), edited for Singaporean flavour with references to National Service and even how to eat Kaya toast in a manlier way. During the number, as Zaza was taught how to sit, walk (not sashay!) and speak in a lower tone, the ensemble also popped up at the coffeeshop dressed as various stereotypical masculine roles, from solider to pilot to policeman, and of course businessmen in well-pressed suits, making for a high energy number that was wildly entertaining at the same time.

All of this results in the final de-gaying of the house when Anne’s parents finally meet, and the set was transformed from a flamboyant apartment to a more conservative one, even putting up a crucifix on the wall to espouse their ‘Christian values’. Hossan Leong as Zaza and George’s maitre d’ was very fun to watch, as his exaggerated ‘manning up’ left the audience in stitches. 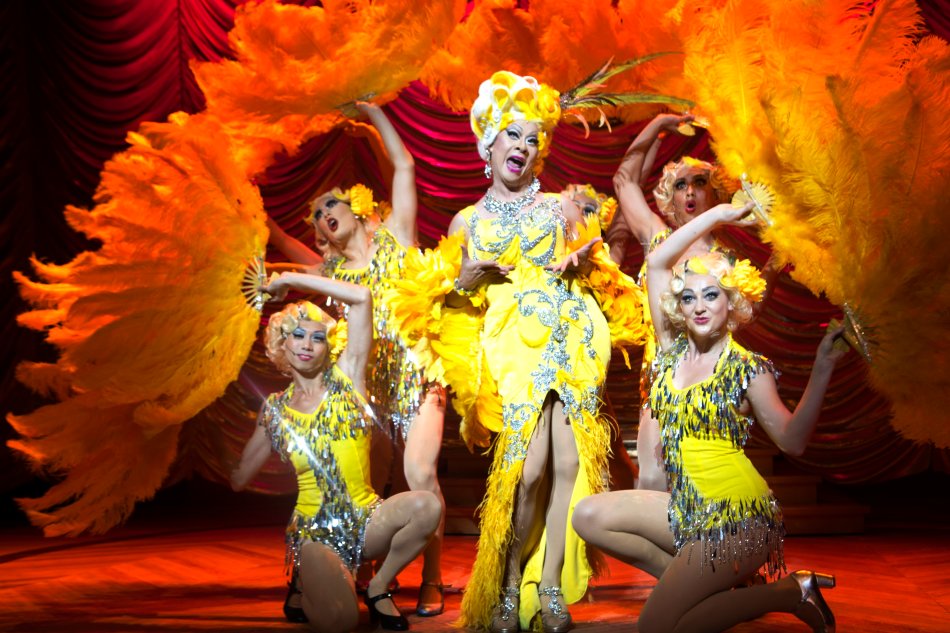 Having all the build up from the previous scenes, the audience can’t help but root for Albin every step of the way as he impresses the future in-laws with every move, getting the party a dinner reservation at the notoriously fully booked restaurant Jackie’s, drawing admiration from Mr Tan. From all the good feelings, Albin is eventually coaxed into performing a song, alongside Jackie herself (Frances Lee), and the two do a rousing performance of “The Best of Times”, a catchy number that matches their two voices to perfection and an absolute showstopper and feelgood number. Even Darius Tan managed to chime in with a few lines, spicing up the song even further.

Despite all the efforts to cover up the latent homosexuality though, Anne’s parents ultimately never accept Zaza and George for who they are. Yet, we were persuaded to shed a tear at its emotional ending, a family that remains united in spite of everything. La Cage Aux Folles is overall a brilliant production that kept our attention enraptured throughout the entire show, with an important message of acceptance and being true to one’s self that will almost certainly touch everyone in the audience, balancing sentimentality with big, over the top numbers and slick choreography, and a production that deserves to be restaged over and over again, perfectly representing the essence of W!ld Rice’s ethos.

La Cage Aux Folles plays at the Victoria Theatre from 19 April to 13 May. Tickets available here