Japanese avant -garde artist Yayoi Kusama is arguably one of the world’s most influential and well-known artist- playing an integral part in key art movements of the 20th and 21st century and transcending the art world to achieve pop culture relevance. This year, National Gallery Singapore presents Life Is The Heart Of A Rainbow, the first major survey of her work in Southeast Asia, featuring over 120 of her paintings, sculptures, videos and installations. 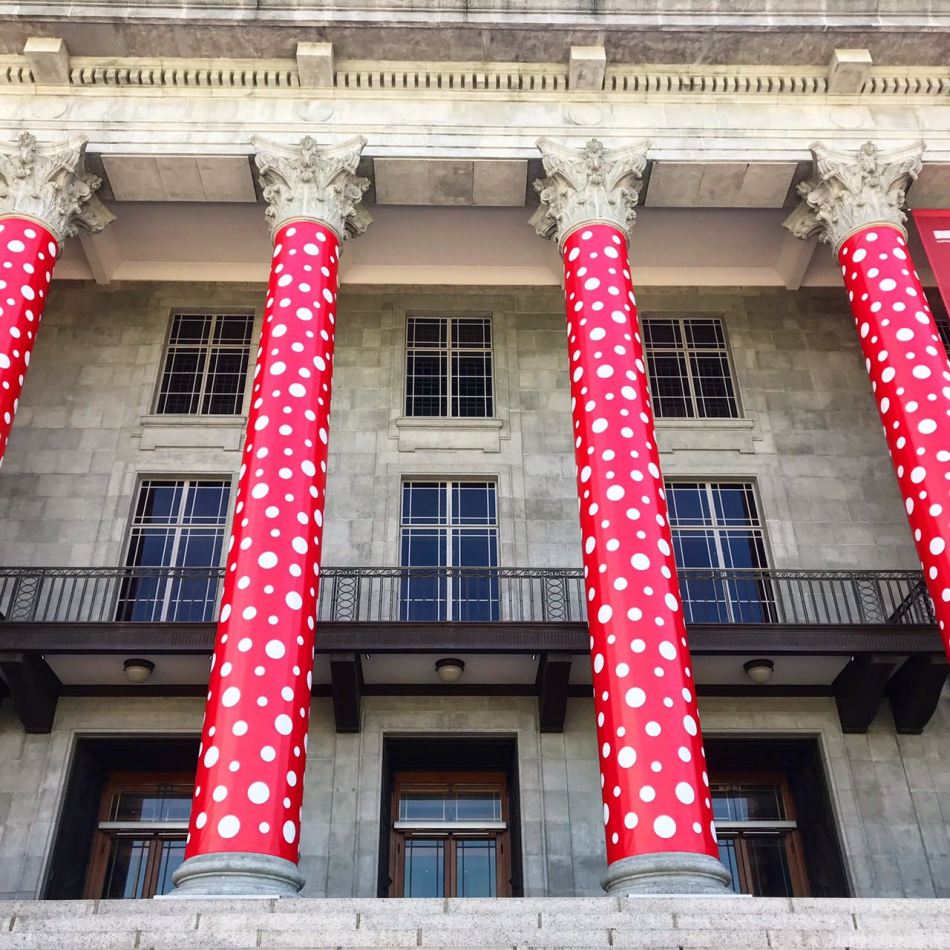 And to celebrate, the National Gallery has been completely Kusama-fied, with her iconic polka dots appearing everywhere from the wall of Gallery and Co, the giant facade pillars and the main foyer, where large polka dotted orbs hang from the ceiling.

Born in 1929 in Matsumoto, Japan, Kusama began painting as a small child and, against her parents’ wishes, began her training in Kyoto, Japan. Frustrated with the oppression she felt from conservative Japanese society, she moved to New York to continue pursuing art and eventually became a key fixture in the Pop Art movement with her provocative exhibitions and demonstrations.

After a prolific art career spanning multiple mediums (painting, sculptures, installations, videos, demonstrations, poetry, among others), she returned to Japan in 1970s where she checked herself into a psychiatric ward and has remained there ever since. Now 88 and wheelchair-bound, Kusama continues to produce art- one of the newest being Life Is The Heart Of A Rainbow, the titular painting this exhibition is named after.

With Kusama, it is difficult to divorce her art from her mental health. Her work and its motifs draw strongly from the psychological trauma she experienced since childhood, particularly her hallucinations of constantly seeing the world through a screen of dots. 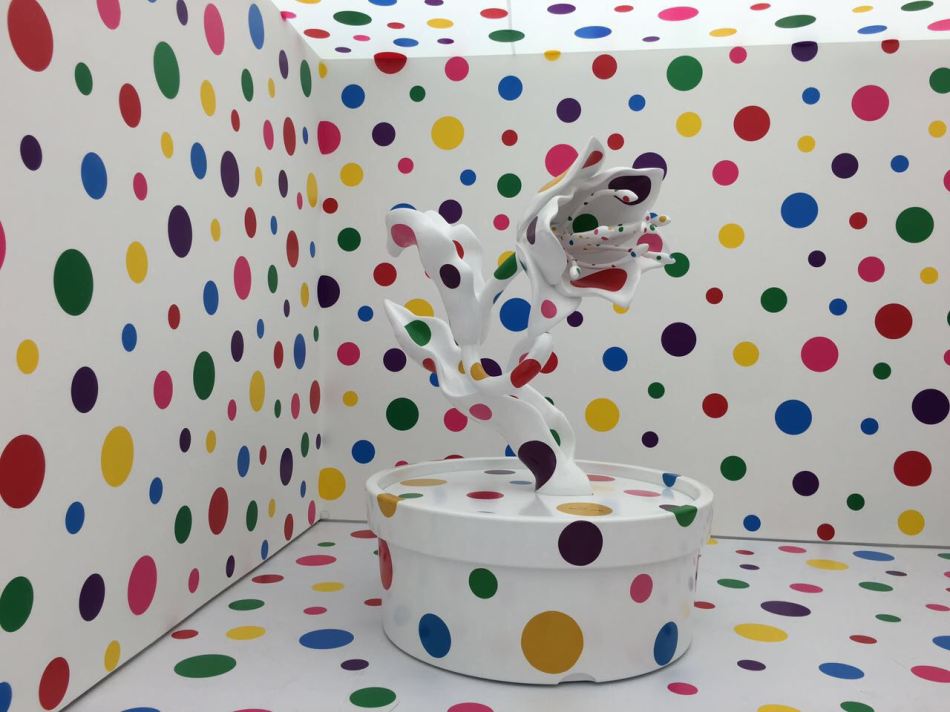 This inspired her exploration of “obliteration”, a key theme of her work which she describes as the complete destruction of every trace of something, and features in her artwork as paintings, sculptures, surfaces and even whole rooms covered in dots and net designs.

The exhibition focuses on the immersive and expansive nature of Kusama’s work and yes for those wondering, all the Kusama staples are here with dots, pumpkins and infinity boxes galore. 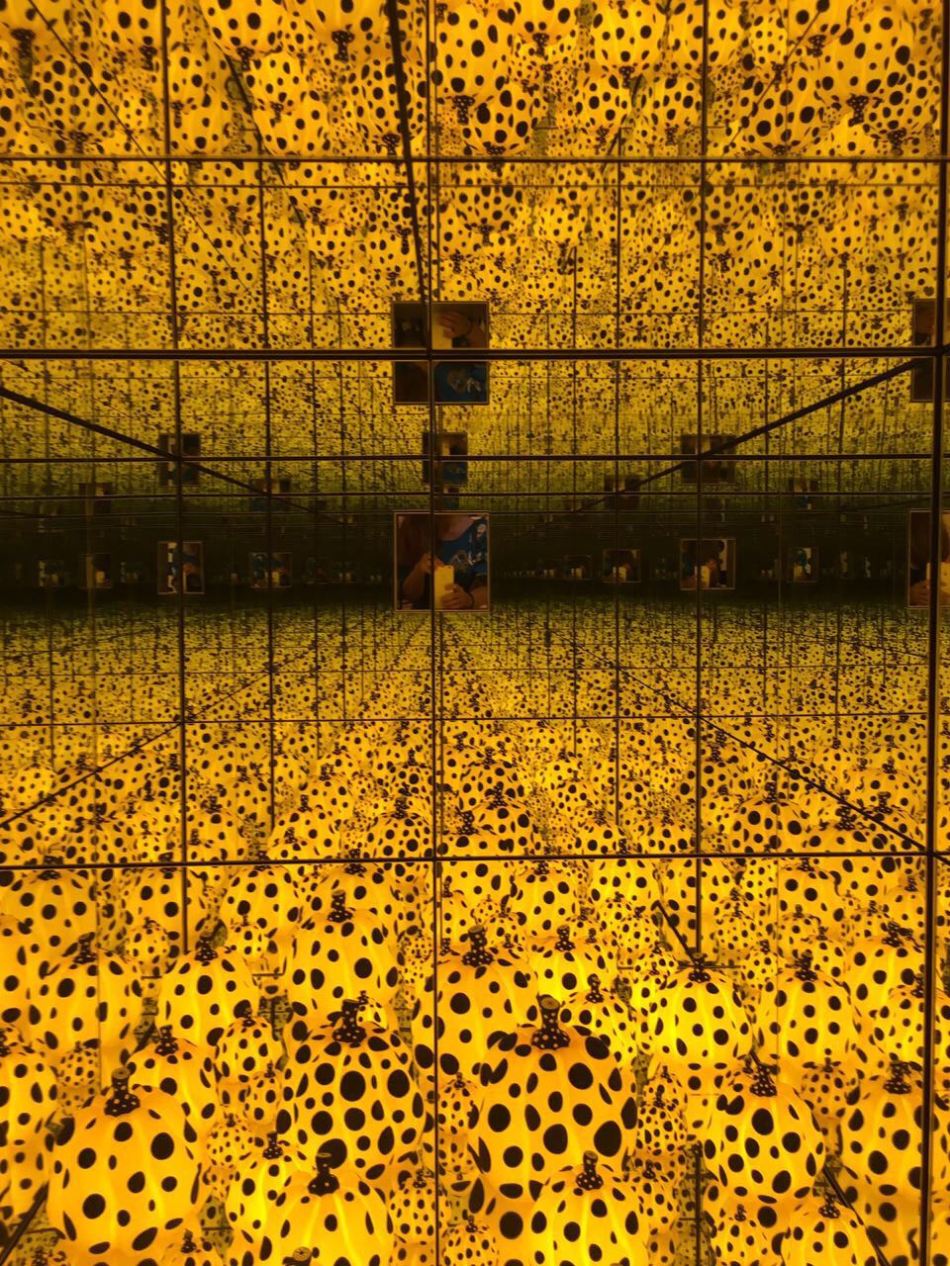 The exhibition at the National Gallery Singapore follows Kusama’s artistic journey chronologically, opening  with a series of her net paintings from the 1950s before embarking on a journey through her vast repertoire of mediums, including a multitude of infinity boxes and rooms, large scale installations, soft sculptures and paintings. Her iconic pumpkins also show up in a variety of mediums, most strikingly in a version of Kusama’s infinity box titled The Spirit Of The Pumpkins Descended Into The Heavens, where the viewer is confronted with a vast expanse of yellow and black pumpkins. The gallery smartly places the box and its mirrored exterior in a room wrapped entirely in the same print, further emphasizing the overwhelming and dizzying effect with polka dot overload.

Some of Kusama’s most political work are also on display, with images from her provocative performances and “happenings” staged during her time in New York. Using her bodies and others as a key element in her work, Kusama frequently covered her collaborator’s naked bodies in polka dots, as part of her anti-capitalist, anti-war social demonstrations. The exhibition ends with the titular painting, Life Is The Heart of A Rainbow, displayed alongside 24 other works from Kusama’s My Eternal Soul series (some which have never been displayed before).

What will arguably be the most popular work of the exhibition is Gleaming Lights Of The Soul, an example of Kusama’s wildly famous Infinity Boxes. Conceived as an attempt to translate her dot and net patterns into an immersive sensory experience, the nondescript box hides a mirror-lined chamber with floating orbs of light inside. Stepping into an Infinity Box for the first time is an incredible experience. As the door swings shut and the noise of the museum melts away, you suddenly find yourself suddenly suspended in an kaleidoscopic illusion of infinite space. Surrounded by pulsing lights, it feels like you are floating in some pocket galaxy- an experience that manages to be both vast and surprisingly intimate at the same time. Due to the expected popularity of the work and a restriction of 2-3 people in the box at a time, expect snaking queues and a substantial wait. Also each group is limited to 20 seconds within the box, which means the line moves relatively quickly, but unfortunately results in there being scarcely enough time to fully experience the vastness and magic of her work, before the door opens and the illusion breaks. If photos are a must, it’s worth going twice: once to enjoy the work and another to get the requisite selfie for Instagram.

A personal favourite is Kusama’s video installation: Song Of A Manhattan Suicide Addict, where the artist clad in iconic red wig and polka dot dress, recites a poem reflecting her struggle with depression against against a backdrop of spinning psychedelic patterns. The effect is compounded with the use of opposing mirrors flanking either side of the projection, reflecting Kusama into infinity. The title comes from Kusama’s debut novel and gives us an insight into her worldview and motivation to create art. With lines like “swallow antidepressants and it will be gone, tear down the gates of hallucination…” juxtaposed against the bright and cheerful colours, it is a poignant look at an artist finding joy and beauty through her personal suffering.

More than a year into its opening, The National Gallery Singapore once again proves its ability to collaborate with some of the world’s top museums and artists and to bring in big names in the art world. With the amount of hype the exhibition has already generated and the record number of visitors expected, it seems like almost a moot point for me to ask you to book your tickets. But as you prepare your cameras, phones and battery packs, remember to look beyond the instagrammable and get ready to discover the extraordinary life and work of Yayoi Kusama, the eccentric Grand Dame of Avant Garde. 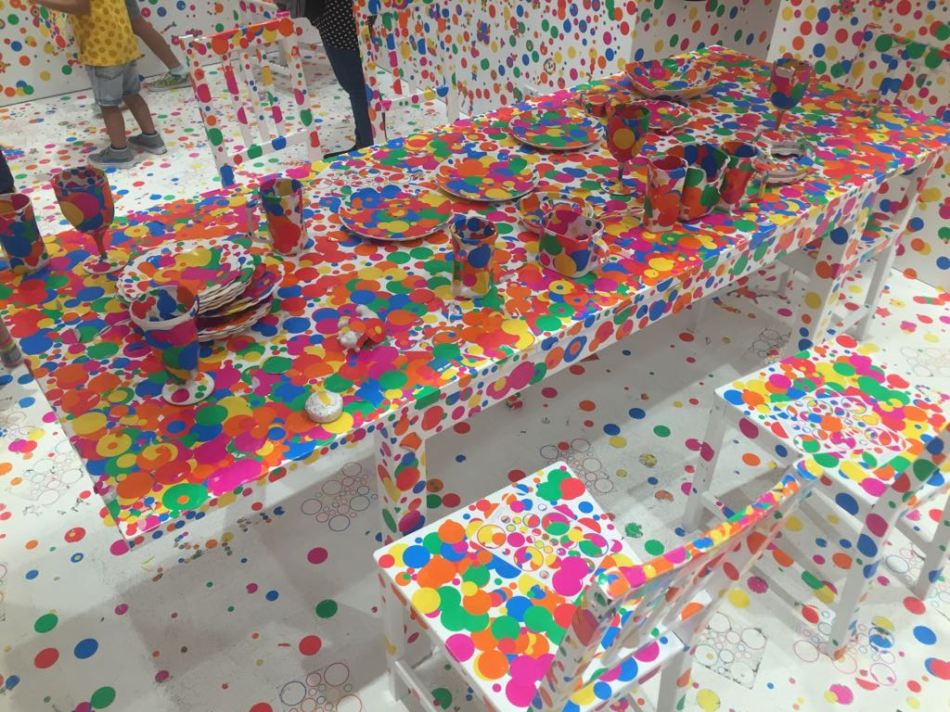 Still can’t get enough of Yayoi Kusama? Make sure you check out Kusama’s The Obliteration Room, presented as part of Gallery’s Children Biennale. Once again using polka dots as a leitmotif, this participatory children’s exhibition invites viewers to stick thousands of colourful round stickers in an entirely white room and furnishings and to watch as the “Obliteration” process happens in real time. Don’t forget to drop by Gallery and Co where they have curated a special selection of Kusama-themed products including shirts, postcards,mugs and more featuring her iconic motifs and prints.

By Sim Xin Yi for Bakchormeeboy

Yayoi Kusama: Life is the Heart of a Rainbow runs from 9th June to 3rd September at the National Gallery’s Singtel Special Exhibition Gallery on Level 3. More information and tickets available here.

0 comments on “Yayoi Kusama: Life is the Heart of a Rainbow at the National Gallery”