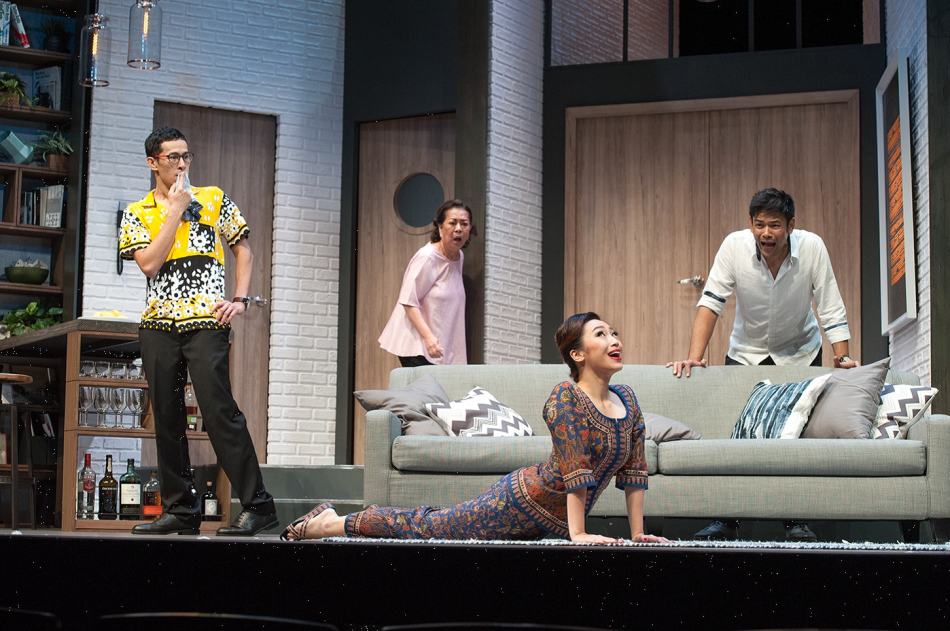 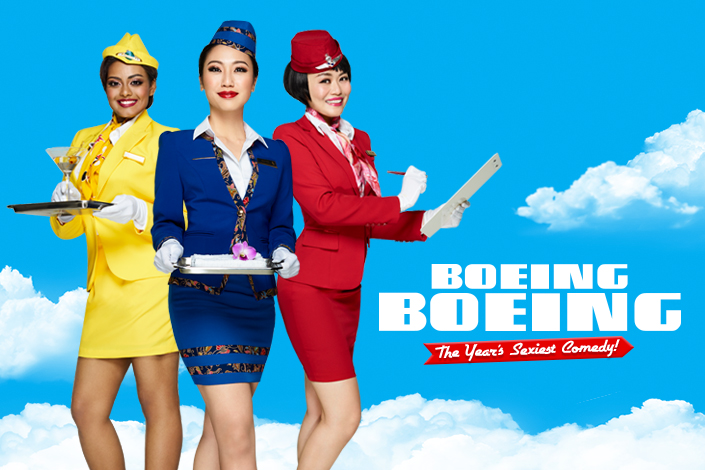 Mile-high mayhem may be looming on the horizon, but whichever Star Alliance member you end up flying with, be it Singapore Airlines, Air China or Air India, your ‘in-flight’ entertainment is guaranteed as W!ld Rice returns with a riotous fourth staging of a comedy classic.

Boeing Boeing has always been one of W!ld Rice’s classic bestsellers. Ever since the company brought it here and Glen Goei first directed it for local audiences in 2002, it’s received overwhelmingly positive feedback and sales, subsequently returning for similar successful restagings in 2005 and 2010. Just as Goei made a 1960 play relevant again in the early 2000s, 15 years on from its maiden flight, Pam Oei makes this new production of Boeing Boeing a play for the 2010s, upgrading it and maintaining its status as a choice ‘destination’ for theatregoers. 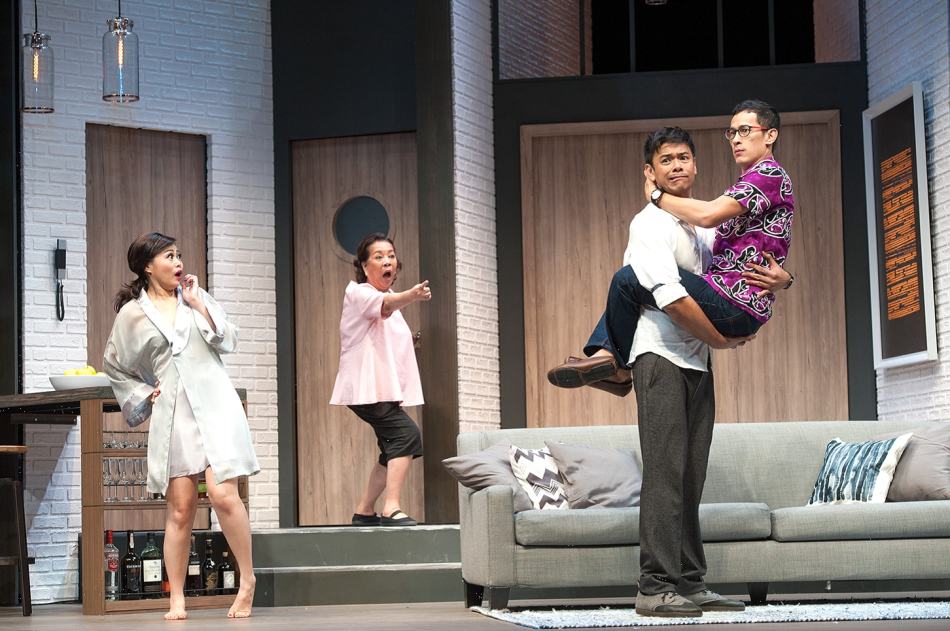 Director Pam Oei is no stranger to W!ld Rice, and particularly familiar with Boeing Boeing, having acted in previous iterations of the play as Miss Cathay Pacific. So it’s no wonder that audience expectations would be running high after taking over the mantle from Glen Goei as ‘Pilot-in-Command’ to direct this all new version of the play, with a new cast and new lineup of air stewardesses.

Boeing Boeing follows the antics of modern day Cassanova Bernard (Rodney Oliveiro) as he juggles simultaneous engagements to three gorgeous air stewardesses with an impeccably organized flight schedule. But his foolproof plan encounters a touch of turbulence when he’s beset with unexpected sandstorms, faster planes and flight delays. What ensues is a comedy in chaos, as all three stewardesses return home on the same night, threatening to expose and end his philandering ways once and for all, and he, along with visiting friend Robert (Shane Mardjuki) and long suffering maid Rosa (Bibeth Orteza) desperately attempt to keep it all under wraps. 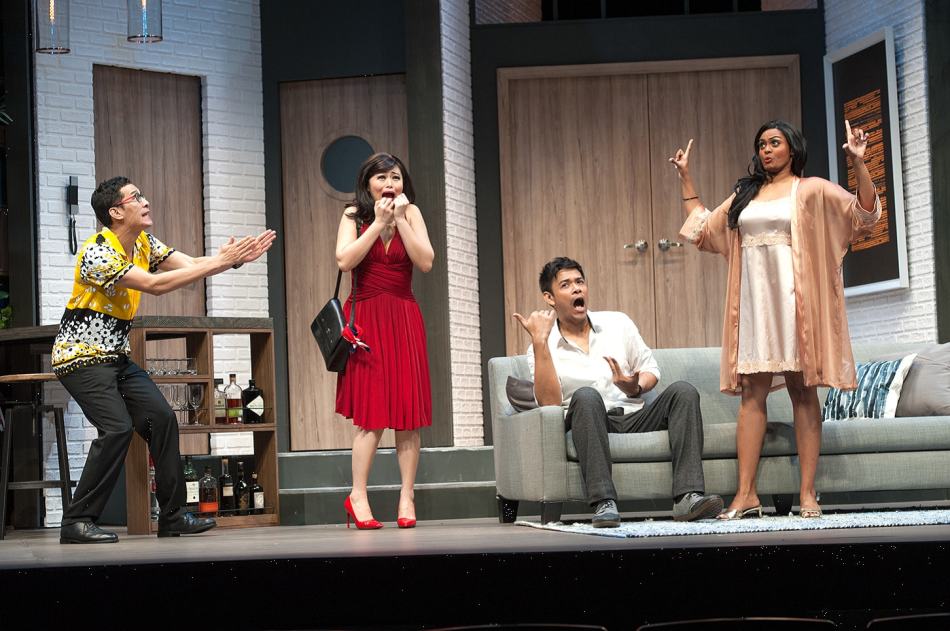 Boeing Boeing’s humour comes mostly from the Murphy’s Law that befalls Bernard’s plans. Everytime he successfully placates one girl, another swoops back into his life to create a new set of problems to resolve, the cycle repeating itself and only getting more jumbled each time. A play like Boeing Boeing is always at risk of losing control of that chaos, but Pam Oei steers her vessel with aplomb, allowing the chaos to run wild, yet maintaining a strange sense of order to it that allows each and every cast member to shine with their own brands of humour amidst the chaos.

It’s fascinating to watch Rodney Oliveiro as the initially superconfident and put-together Bernard completely unravel over the course of the play and get his comeuppance. Meanwhile, Shane Mardjuki shines as the innocent Robert, who tempers his character’s wide eyed admiration of Bernard with the occasional hysterics and cheeky style of flirting. Even in a smaller role, Bibeth Orteza is a constant presence throughout the play, and her humour extends beyond her stereotype as a Filipino domestic worker when she reveals her sassy attitude towards the other characters and exasperatedly airs her grievances.

But of course, the stars of the show are still the three stewardesses, all clad in scarily accurate uniforms by tireless longtime W!ld Rice collaborator Frederick Lee. Judee Tan as Air China stewardess Jin Jin is a Szechuan firecracker, exaggerating her every movement a la Chinese opera while reacting just a little too loudly when taken aback by Robert’s advances. Tan maintains a hilariously accurate China accent throughout, and her high energy pays off in spades, ensuring that every time she appears onstage there’s bound to be a guffaw somewhere in the crowd.

Meanwhile, breakout star Rebekah Sangeetha Dorai is absolutely incredible as her turn as Air India stewardess Jayanthi gets the stereotype just right without going overboard. All of her hand gestures and angry muttering in Tamil were spot on, and Dorai displays exemplary control over the comedic touch, balancing perfectly between Bombay bombshell and goddess of rage. A single shush from her is powerful enough to silence the audience before they erupt into laughter at her confused exasperation. Dorai is a force of nature to watch out for, and we can’t wait to see her continue her good work with W!ld Rice in future shows.

Of course, we can’t possibly forget about our resident Singapore Girl. Oon Shu An as SQ Girl Jeanette is a delight to watch as a woman who knows exactly what she wants and will stop at nothing to get it, perfectly encapsulating the entitled tai tai wannabe stereotype, getting the accent exactly right while showing off a penchant for aggressive flirting and relentless pragmatism. One particularly memorable sequence and stroke of directorial genius sees Jeanette being thrown onto the couch after she is nearly caught in flagrante delicto with Robert, rolling off it like a batik-patterned popiah onto the floor before hurriedly moving into a yoga position, acting as if nothing’s wrong, evoking laughter from the audience at the sheer ridiculousness of the situation.

We were also very charmed by Eucien Chia’s set, a modern, minimalist interior of a house that’s basically a millennial’s dream home, with chic furnishings and industrial style walls – concrete grey and exposed brick painted white. What’s even more impressive was his sheer attention to detail, creating interiors to each individual room giving the illusion of it being a complete and real house, and how strong the set was to withstand the constant slamming of doors. There’s also something immensely satisfying about a tall set that fills out the space nicely without overwhelming the cast, and was the perfect backdrop to Boeing Boeing. 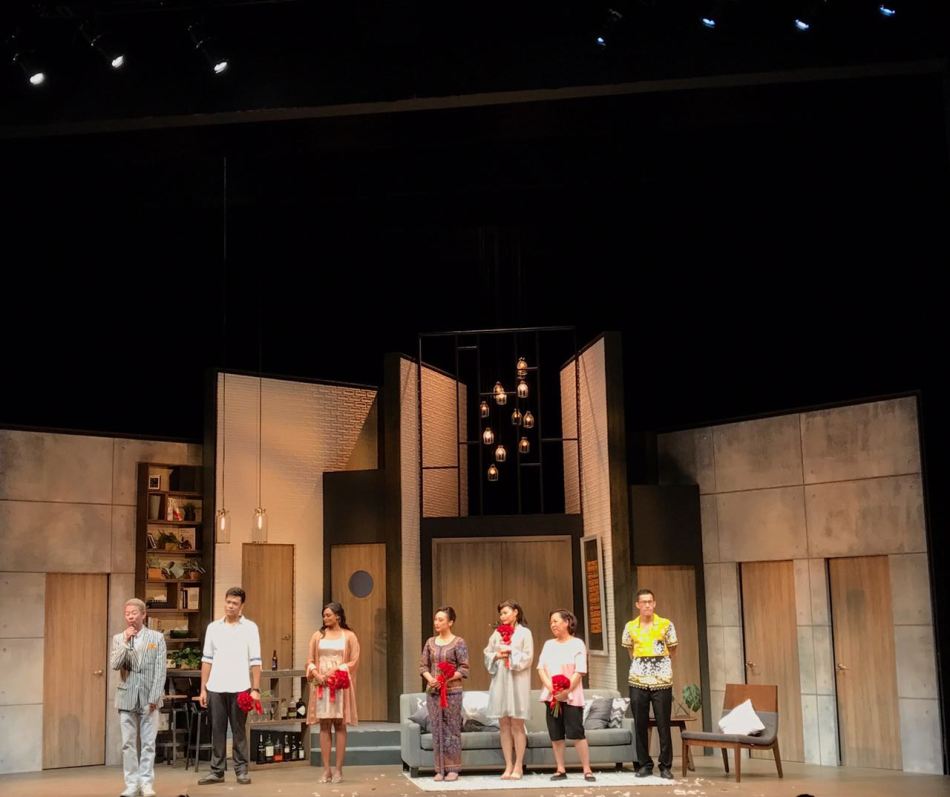 It’s not easy producing laugh a minute antics, but Oei has surpassed expectations with her excellent handle on the material, breathing new life into Boeing Boeing with her directorial vision and leading the exceptional cast into keeping the laughs running throughout with their superhuman energy. For this production of Boeing Boeing, the sky’s the limit as it goes full throttle on the comedic front with no time for stopovers in between the jokes. We highly recommend you to cash in your miles and secure your ticket, because this flight is first class.