“The Beast of Bolsover” gets a media makeover in Dennis Skinner: Nature of the Beast. This is no nature doc though, and director Daniel Draper succinctly and skilfully peels back the skin of the beast to reveal a surprisingly heartfelt and intimate look at the man behind the Labour politician.

Peppering the film with snippets of Skinner’s public appearances and speeches, it’s clear to viewers why he’s been labelled the Beast – his style is loud, unrelenting and full of vim and vigor as he speaks out for the working class, impassioned, steadfast and uncompromising. A true force of nature, one would never imagine the other side of Skinner – a man brought up in a small mining village in Derbyshire, raised alongside nine siblings. In the interviews with Skinner, we see a sensitive portrait of a man with a surprisingly keen interest in horticulture, complete with some choice shots set in Richmond Park, a view of the Isabella Plantation, flowers and babbling brooks as Skinner talks about his love and expertise on parks and recreation.

Although peppered with the occasional political slant, Nature of the Beast never claims to be a political film, instead chronicling the drive and history behind what made Skinner the man he is today. The film manages to treat the man’s political career and character with an immense amount of respect, yet sheds some light on the man’s interests, hobbies and ultimately, unveiling a keen relatability while keeping that sense of reverence. 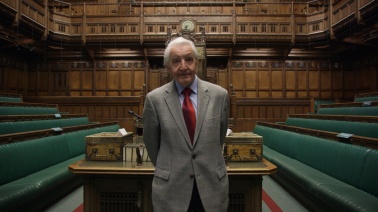 As far as documentaries on political figures go, this one’s a pretty fun, easy watch with a surprisingly charismatic subject at its centre, one you’re willing to listen to for hours on end. Even if you don’t agree with his politics, it’s easy to see how and why he sees things the way he does, and inculcate a mad amount of respect for the tireless amount of work this man has put into his cause for the last 50 years.

Dennis Skinner: Nature of the Beast is out in UK Cinemas 8th September