“Eh, you think this one your grandfather’s road ah?” Is a common retort to careless drivers or pedestrians acting as if they own the roads. But in the case of Neo Kim Seng, it can be taken quite literally if you ever find him walking down Neo Pee Teck Lane, named after his grandfather.

First presented in 2015 as an English-language monologue, a photo exhibition and a book, My Grandfather’s Road is a theatre project of stories surrounding Neo Kim Seng’s life as he grew up on Neo Pee Teck Lanealong Pasir Panjang Road, until he moved out in 1973. This June, the project will be making its return in the form of not one, but two versions of the same text, performed in English by Karen Tan, and in Catonese by Gary Tang and Tan Cher Kian, both of whom also did the translation and adaptation into Cantonese.

Says Kim Seng: “It’s actually not entirely a story about my grandfather, and I wrote it as a means to renew my relationship with my family. I first wrote the book for my mother. She’s getting very old and as I was writing it, I realised the urgency to create this, to capture these stories before the people who can tell them forget. A lot of people were surprised that I was opening up to tell this story; I had a difficult relationship with my father and never really knew my grandfather. But I think that it was important to tell this story – it’s not going to change the world, but it needs to be told.”

The staging of My Grandfather’s Road will reflect that focus on the stories at hand, utilising a simple setup of a table, two chairs and a screen displaying photos of the past and surtitles. On the two versions of the work, Kim Seng explains: “We initially wanted it to be a direct translation of the English text, but found it wasn’t possible. The Cantonese version then becomes a response to the English text, where Cher Kian will be speaking from a first person perspective before segueing into Gary’s storyteller, third person narrative. As for the English version, it’s an expanded version of the one we first staged in 2015, with new material based off interviews with my relatives.” 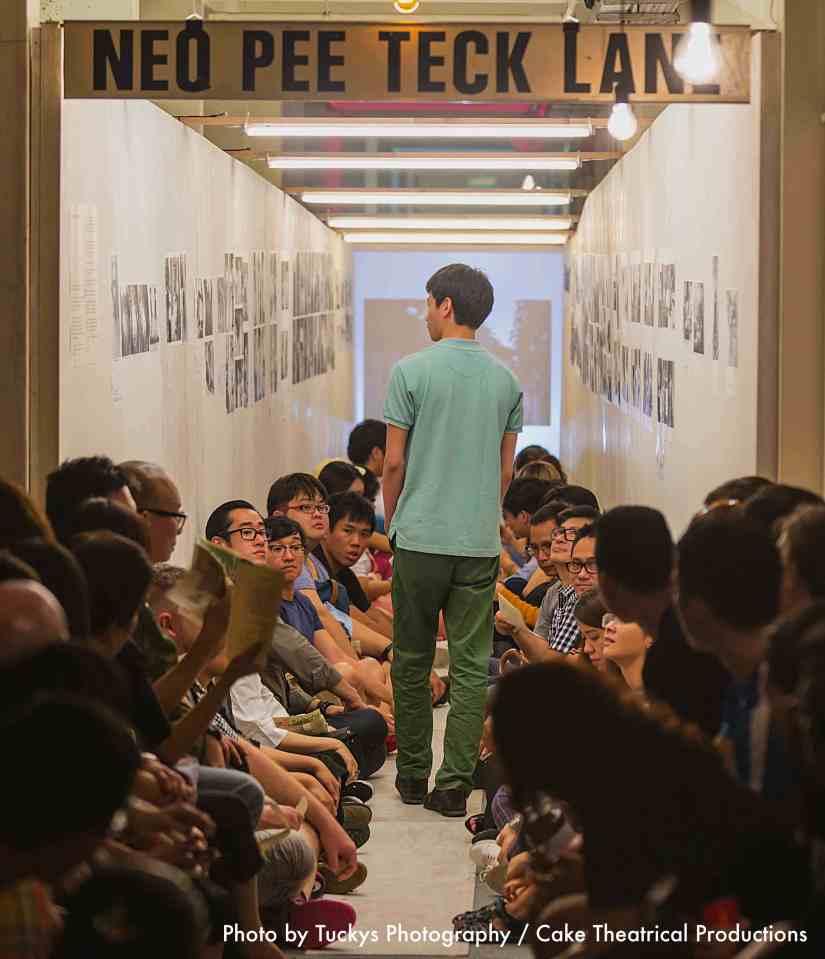 Says Karen Tan, in sharing her thoughts on dialects: “Already, as performers with different backgrounds and personalities, you’ll see the performances taking on very different presentations with how we’ve chosen to approach it. Everytime I watch something in dialect, I immediately think back to how people like your ah ma or neighbours growing up used to speak like this. It draws people in naturally, and even if you don’t understand exactly what they’re saying, it’s already a different way of experiencing the story.”

Kim Seng adds: “Whenever I go to Chinatown, I’d order from the hawkers in Cantonese, or even in Sungei Road, when a peddler spoke to me, I answered in Cantonese. It’s a language you learn orally, it’s always been there since learning it as a child and you can’t erase it.”

On the casting process, Kim Seng expressed his desire to work with Karen, in that she was someone who would understand the script and take time to interrogate the character before getting into it, helping immensely with the creation process. As for the Cantonese version, he felt that the text took on new layers of meaning, with an unexpected socio-political message about lost dialects and history itself, and chose Cher Kian for his background and intimacy growing up with the language, and Gary for his fiery passion for the preservation and survival of the language.

Says Gary: “In my performance, I hark back to the days of storytelling, back when Cantonese storytellers could still be heard on the radio. If the ban on dialects never happened, we might still be able to sit around and listen to all these different dialects. Although we may think of it as niche and associated only with certain types of arts groups, what Kim Seng is doing is a brave new frontier to see how else we can bring dialect into the modern world and keep it relevant and accessible.”

Says Cher Kian: “I’ve always had an affinity for the non-formal languages, and I grew up speaking Hakka and Cantonese. In Malaysia, it’s interesting how instead of being suppressed by the government as it has in Singapore, the government doesn’t really care. Instead, it’s the language Nazis who create a self imposed censorship, like how the Chinese schools impose a fine on people when they speak in dialect. In doing this show, we’re renewing history itself as we renew personal relationships.”

Gary adds: “Its quite sad, I know people in their 30s and 40s who tell me straight up that dialects are impractical languages, so there’s no point in passing it down to their children. And then there’s the people who want to, but because they don’t have the foundations or knowledge, they don’t have the capability to pass it on either, and it becomes more convenient to just send your children to learn a completely different third language altogether.” 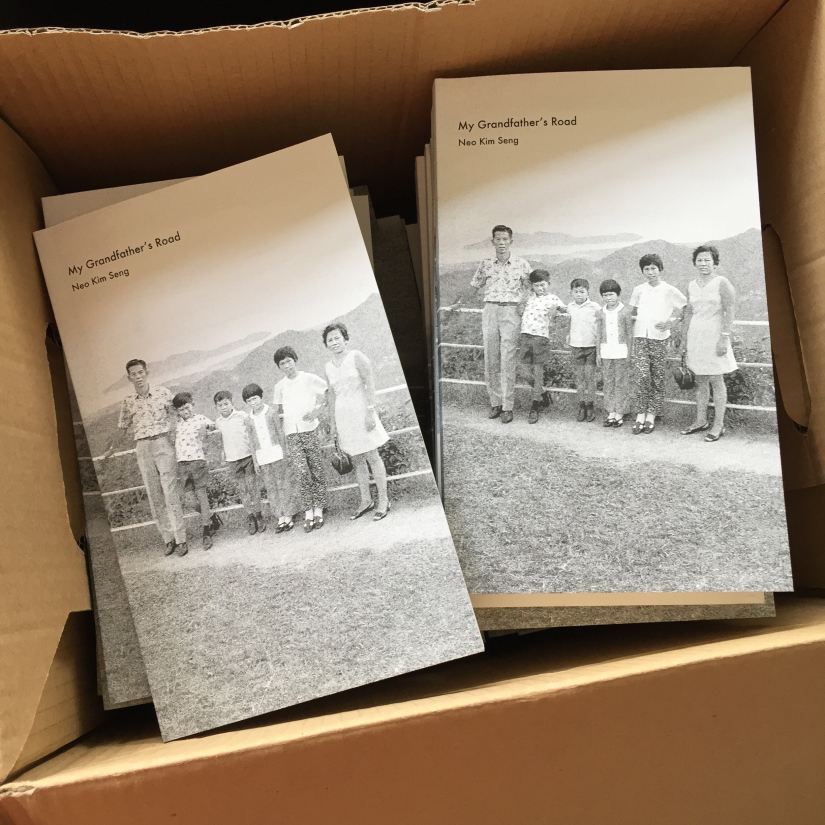 In a sense then, it becomes even more important for locals to remain open to the idea of watching both English and Cantonese versions, and as a result, Kim Seng has decided to offer audience members interested in watching both versions of the show a discount, to encourage experiencing My Grandfather’s Road in its entirety. Says Kim Seng: “I hope that through this show, people can think about their own stories and become more open to talking about them to their families. Our personal stories all contribute to the social fabric we share, ultimately forming the story of our homeland.”

Karen concludes: “All this work I’ve had a chance to do is about people who are no longer around, not just Kim Seng’s grandfather, but the entire generation he represents. You’ve got people saying oh, my parents or grandparents never taught me how to do that. I think we’re all kind of rootless, and always looking for some kind of connection somewhere. Sometimes people forget, whether naturally or on purpose. There’s a universal kind of rootlessness everyone experiences now, and it wouldn’t be unusual to tell a story like this somewhere in Australia or Indonesia. And this show, it’s really just all about looking for a connection to the past through the power of storytelling.”

Photos from My Grandfather’s Road blog

My Grandfather’s Road will be performed at the Centre 42 Black Box in English on 14th and 16th June (8pm) and 15th June (3pm), and in Cantonese with English surtitles on 15th June (8pm), 16th June (3pm) and 17th June (2.30pm). To book tickets, email Kim Seng at nptlane@gmail.com, and visit their website for more information. For those interested in watching both English and Cantonese versions, a special concession rate of $18 per ticket is available when buying both, do indicate this when emailing Kim Seng.