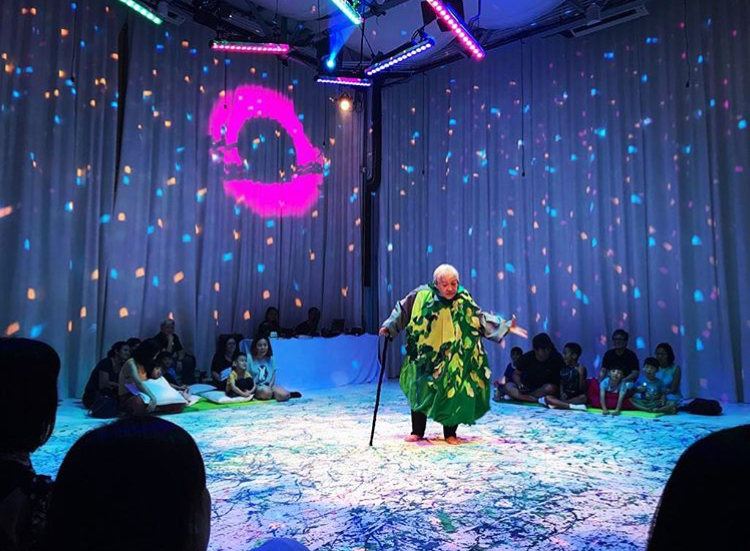 An immersive, interactive meditation on solitude and friendship opens the inaugural 100 and 100 More Festival

Jeffrey Tan’s Into The Blue Forest charts a day in the life of an ordinary, old tree (Beatrice Chien) as she encounters flora and fauna living in the forest as they interact with her, from to a wisecracking spider all the way to a sly snake. Midway through, she chances upon the idea that she wants to become a blue tree, figuring out ways and means to achieve that dream as the performance goes on.

“Why does a silly old tree want to become blue?” is a question many might be asking, alongside “What is the moral of the story?” Surprisingly, unlike most children’s theatre, there isn’t a moral, or if there is, it’s not made explicitly clear. There’s something endearingly simple about a tree wanting to do something for the sake of it, rather than possessing any kind of hidden agenda or intent behind it. Many of the actions and scenes are left to one’s own interpretation, unfolding naturally rather than lecturing or hammering home a point.

Audiences are immersed into the surreal environment from the very beginning, as they . step into the huge white box in the Artground, with a Rorschach-like floor splattered with flecks of paint, an abstract version of a forest left to evoke audiences’ imaginations. Adding to this are Alberta Wileo’s moody lighting, bathing characters in what feels like light that has had to pierce multiple layers of canopy,  and Chung Ee Yong’s sound design, chirpy or tense as the situation calls for it. The fact that animal friends make their entrance from any of the four curtained sides keeps an element of surprise throughout the show, with audiences unsure which new creature might make an unexpected appearance.

Children take on the role of animal and flower friends that come visit the tree throughout the day, led by either Grace Kalaiselvi or Fadhil Daud as they task audiences to follow their actions. Most of these audience members seemed more than willing to be a part of the theatrical process, with both Grace and Fadhil easily coaxing them to join in with their encouraging tone and complete immersion into their own characters. Despite the multiple languages used sparingly in the script, the story and execution were easy to follow and understand. From time to time, even this adult viewer felt a twinge of melancholy as we watched this tree make fleeting friendships and struggle to make sense of what she wanted, in particular with the brief scenes in which she found herself completely alone.

Into the Blue Forest asks only for audiences to let go of any inhibitions they might have and get lost in participating fully in this charming, enjoyable show for kids, and above all, it is watching young audiences’ enthused and varied reactions that makes all the team’s effort worth it.

Into the Blue Forest plays at the Artground at Goodman Arts Centre from 25th – 27th May, while the entire 100 and 100 More Festival runs from 25th May – 3rd June. For more information and tickets, visit their website here