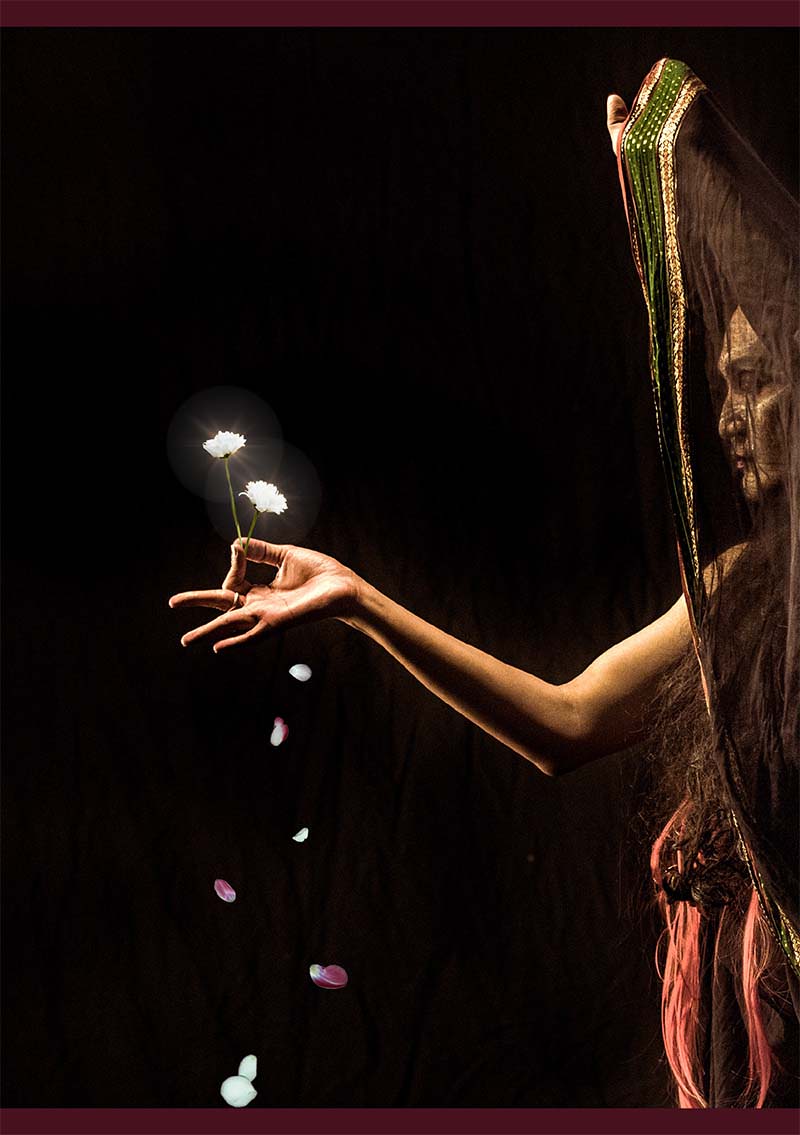 Breaking the silence and giving tortured form to the horrors of abuse.

As part of their regular PANCHA programme, Maya Dance Theatre presents Flowers Don’t Bloom All The Time, the 3rd in the series. In carrying on with their ongoing theme of focusing on one of five elements each time, this year’s programme centres around ‘Earth’, and specifically explores issues of domestic and sexual assault against women and children. Based on real life accounts, the production then aims to shed light on these issues and give a voice to the many who carry on living in tortured silence.

The dance performance was born out of a collaborative effort between conceptualisers Kavitha Krishnan and Shahrin Johry, who worked with local and Indonesian choreographers to craft each vignette in the production, featuring dancers Eva Tey, Subastian Tan, Dewi Galuh Sintosari and Quin Kusumo. Here, Maya Dance Theatre has created a performance that fully utilises Centre 42’s entire grounds (with set designed by Muhammad Izdi), where one’s attention is already caught when you step into the centre, noticing a fire place where one smells burning charcoal and hears crackling flames, creating a sensorial atmosphere to set the performance in. 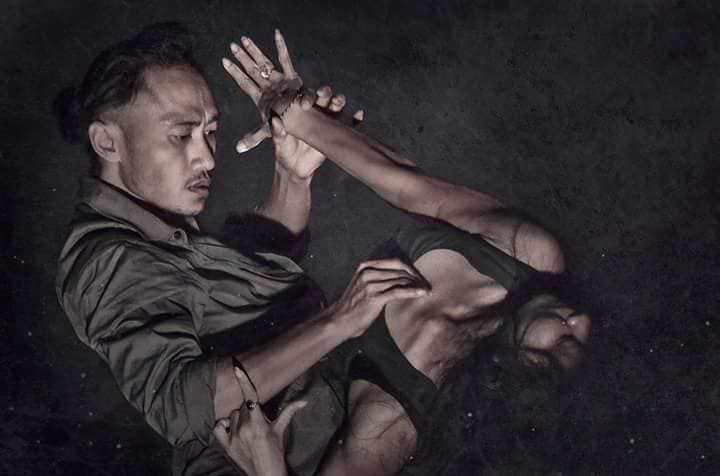 As the performance begins, music starts playing and we hear the faint sounds of metal anklets clinking, only getting louder as she approaches the stage. We watch a woman with 5 husbands as her dance takes us on a journey through her life. She becomes smitten with every man she meets, easily falling for each one as her expressions do the talking for her. As a man walks in with a violin, almost serenading her as he plays, we see her face display happiness, then sorrow, then frustration. Drums act as her voice, creating a steady beat that feel almost as if they represent a conversation between herself and the men. There’s a sense of frustration gained from her inability to communicate as she is drowned out by the loud sounds, leaving only anger and sadness to take over, an air of loss that hangs in the space.

In the next scenario, as a female dancer lays in the corner, we open with a sense of dread as we hear a constant knocking on the door from the soundscape as well as ominous giant footsteps. The space almost resembles a room in a flat, but doubles up as one that is prison-like in its appearance. As we hear the creaking of doors, one can imagine it as the sound of prison gates clanking open and shut. This dancer is trapped, living in constant fear of her tormentor returning to abuse her once again. As much as she struggles and panics, the room is inescapable, expressing her pain and suffering through movement and expression, eventually numbing herself completely as she slows down to a standstill. There is nothing but bleakness in her futile quest for hope. 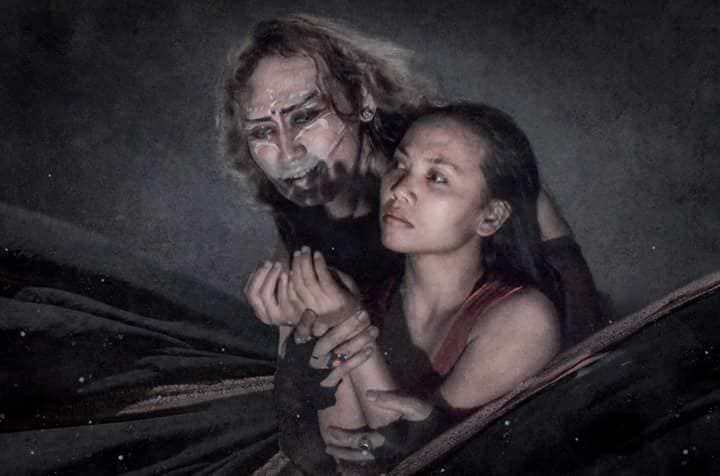 In the next scenario, we’re introduced to a man who walks into the space, where tangled strips of saris have been laid, with 5 of these strips intertwined together. We now bear witness to a story of a man who had been through his own journey of pain and abuse, but suffers from silence because of his male ego and the air of shame that prevents him from showing such ‘weakness’. Abuse affects everyone, regardless of gender, and here, we see how it affects his life, as he takes that abuse into his own actions. In growing up, he takes this out on the five women he encounters (represented by the saris), showcasing an intense lust in his eyes as he touches, caresses and smells each ‘woman’. While he does enjoy the act itself, there is a deafening fear that underscores his every move. Yet he feels compelled to carry on in this way, not knowing any other way to deal with his inner demons, eventually suffocating and drowning in his own sorry and sadness with no other means of escape.

We are then entreated to a conversation between two women, working in Singapore as domestic helpers. When one is told to clean the house, her male employer watches her with ill-intent, and one imagines that it has happened time and time again. As his hand reaches for her shoulder, she knows exactly what is coming, leaving her with trauma in her eyes and fear in our hearts. The soundscape (by music director Kailin Yong) here plays an important role, as we hear the sound of glass breaking and windows being smashed. While the other woman sees what is happening, she is helpless as she is rendered silent by the man. As the reconvene outside the house, they break down and cry, wiping each other’s tears as they feel the impossibility of escape. They have come here for a better life, but at the cost of their dignity and sanity, one can only imagine the amount of fear they go through on a daily basis, entrapped by the decision of whether to speak their truth or keep their jobs in suffered silence. 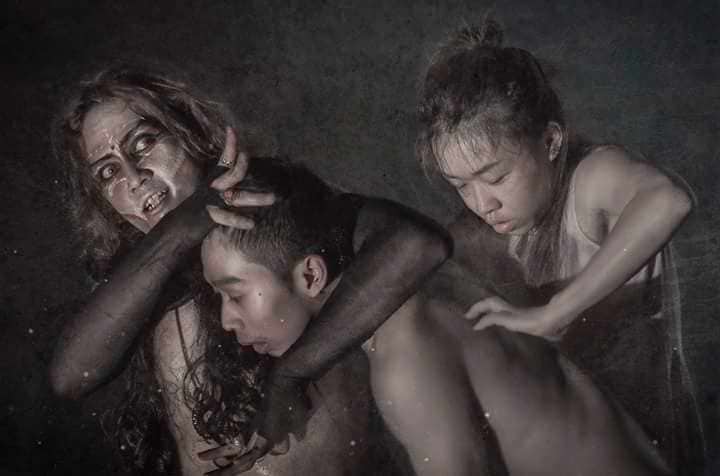 A man then begins to play a string instrument as two women dance. This piece displays raw emotion at its finest, as the women show how ruined they have become, dancing out their fear and sadness, despair and desperation as they experience loss and a complete paralysis at being stuck, unable to do anything. While they are drained by the experiences they have gone through, they seek refuge in each other, completely at a loss as they turn to the audience as if expecting a divine intervention for what they should do.

As a whole, music collaborators Akshara Thiru, Govin Tan, Neil Chua and the SA Trio have worked well together to create a stirring soundscape and atmosphere to maintain a disturbing and emotional feeling throughout the production, while Alberta Wileo’s lighting designer drew our attention to the performers appropriately throughout, shining a spotlight on the dancers and effectively used to add to the set, such as using light to create the semblance of prison windows. Dramaturg Jeremiah Choy also left a poignant note on this production, weaving these stories together so tightly and drawing out their poignancy that some audience members even felt discomforted enough to leave midway through.

The smell of jasmine flowers then fills the air, and we spot a manifestation in the corner, resembling Kali, the Indian goddess of death and associated with sexuality and violence. As the mother goddess watches, the abused woman gives birth to a baby, breeding hope with new life. One sees a change in mood wash over the space, as she feels a renewed sense of vigor and life, a red string entangling the performers to represent how everything is connected by a thread of destiny. The mess needs to be unburdened, and with the string, one sees how difficult it is to be cut loose from the hurt and trauma. In approaching the audience, they seek not simply a solution, but a means of coping, of escaping the stranglehold previous torments have put them through. And once they speak to someone, there is a sense of release, and new purpose that helps them live on.

Flowers Don’t Bloom All The Time isn’t just a contemporary choreography though, and features not only the dance performance, but also an art exhibit that discusses issues of abuse. In one exhibit, a piece highlights the prevalence of child marriage in Nepal. Because of the irresponsible and immature relationships formed as a result, multiple child brides face almost certain death. Flowers Don’t Bloom All The Time takes audiences on a difficult journey as it brings them through a trail of destruction, highlighting the everyday struggles that may be invisible upon first glance, and a still prevalent need to bring these struggles and pains into the light.

Flowers Don’t Bloom All The Time plays at Centre 42 from 15th – 18th August 2018. Tickets available from Peatix For the full PANCHA lineup of events, visit May Dance Theatre’s website here