A space-time continuum busting series of parodies that makes for a successful second outing for this youth theatre group.

Staged in a small, intimate living room space above brand new bookstore-cum-cafe The Moon, Stupid Cupid is a quirky play that feels perfectly designed for a millennial audience. The second production from Patch and Punnet, Stupid Cupid imagines a hapless Cupid (Jit), constantly drunk and unable to fulfil his duties of helping couples fall in love. Over the course of the play, Cupid is then given ten chances to unite a single pair of star-crossed lovers (Mel Bickham and Krish Natarajan) doomed to fail again and again across realities and parallel universes, failing which spells evisceration from existence itself for the god of love. 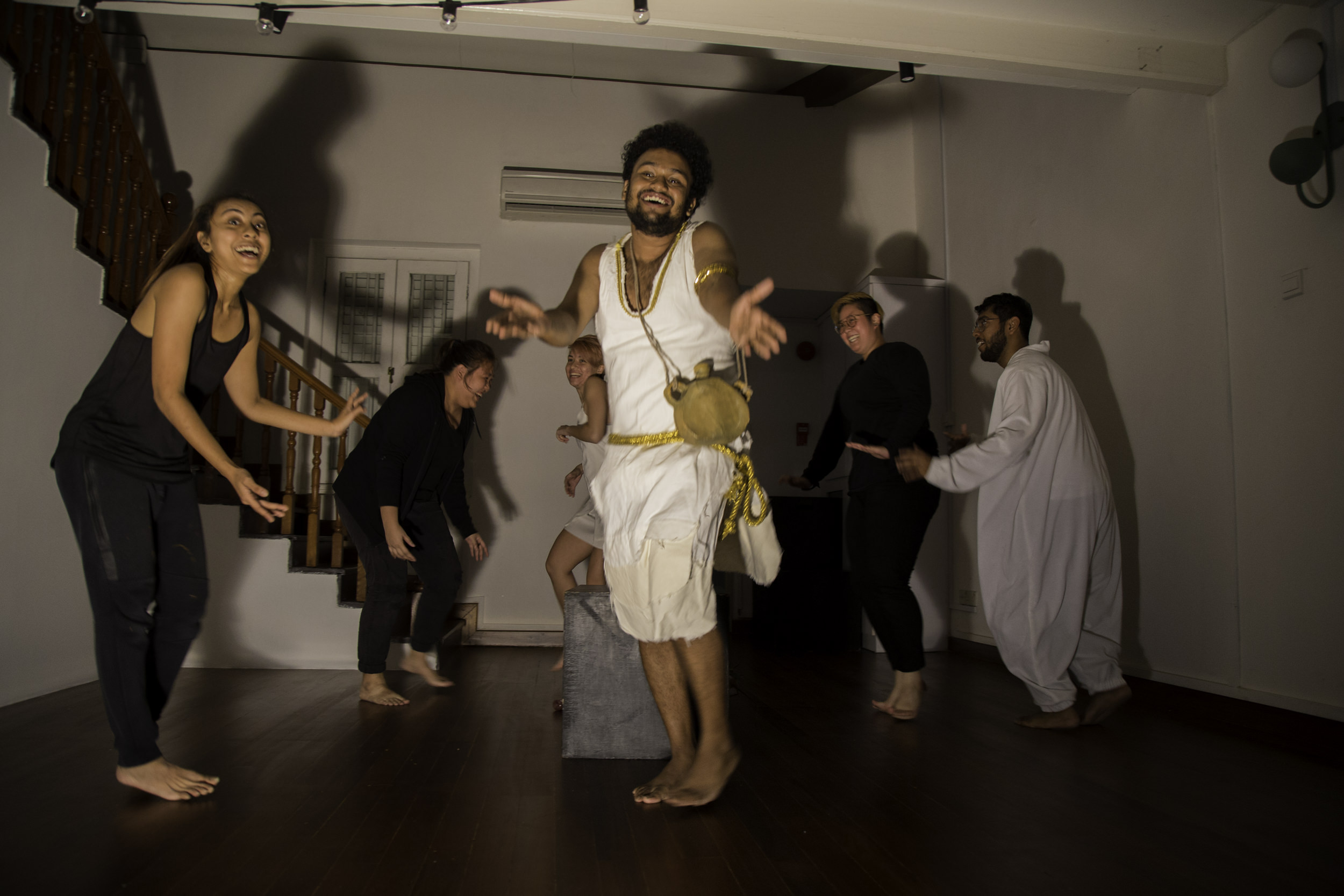 Watching Stupid Cupid is a little like binge watching a series of YouTube parody videos; each scenario presented by the group comprises an unlikely setting making explicit reference to a pop culture phenomenon, ranging from Game of Thrones to Pocahontas, to High School Musical and even Titanic (complete with the infamous bad recorder cover of ‘My Heart Will Go On’). As such, the more one goes in with prior knowledge of pop culture, the more one is likely to take away and recognise as obvious jibes at the tropes encountered in these films. 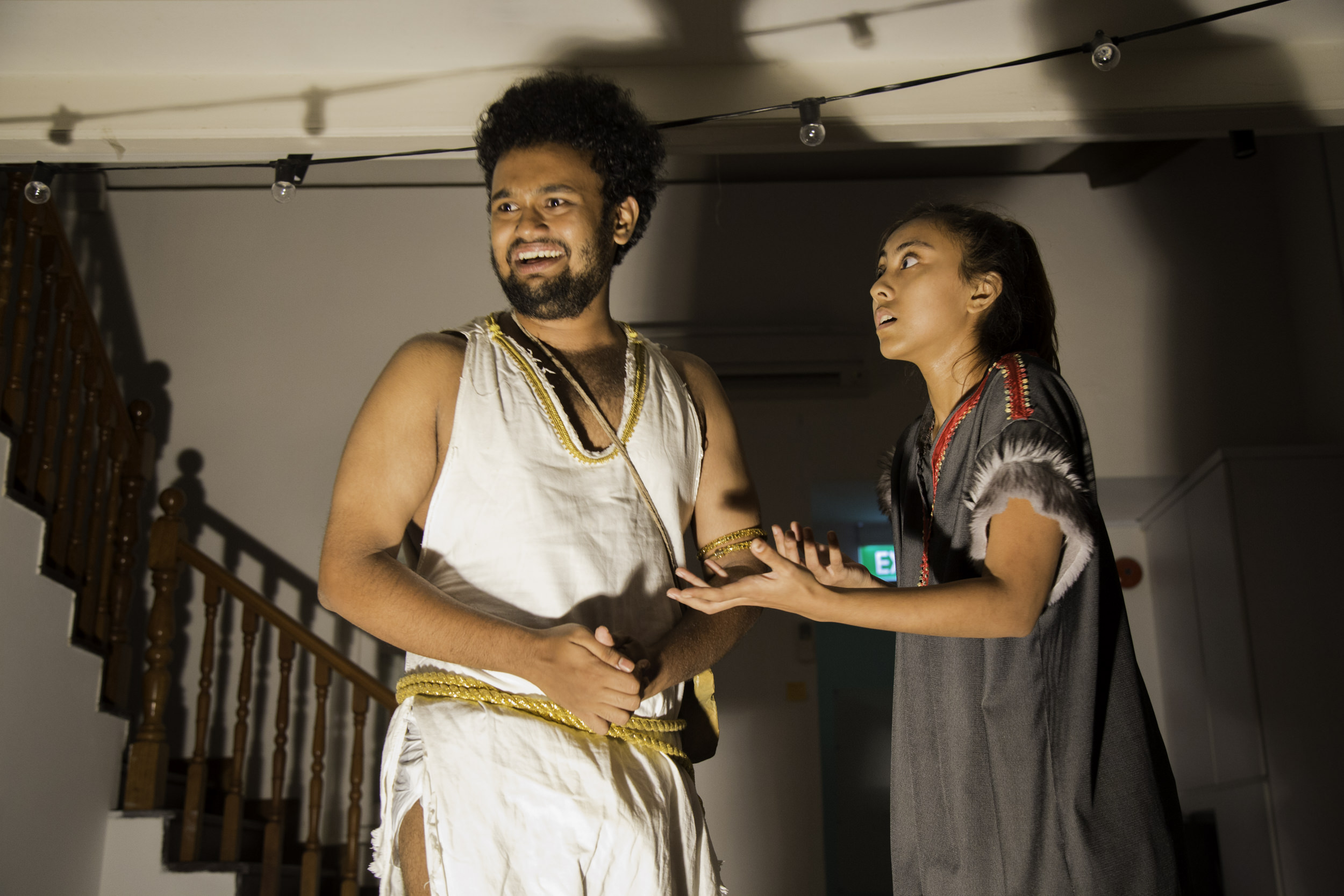 The jokes in every scenario are often irreverent and farcical, with over the top accents and meta-humour (the Teen Titans theme is appropriated and used as the theme song for every scene transition), with the central pair of lovers almost always facing some form of untimely death (personified by Ong Yi Xuan in full goth-loli getup). Adding to the play’s odd charm is how effectively the team have used the unusual performance space, where cupboards under the stairs become their backstage, while cardboard props descend from the second level on visible strings, allowing audiences to better appreciate the makeshift nature of the production, almost as if it is a performance by friends, for friends. In short, it’s an unabashedly wild, comedic ride that audiences never feel they have to take too seriously as they indulge in the weird and wonderful world Patch and Punnet easily invites one into. 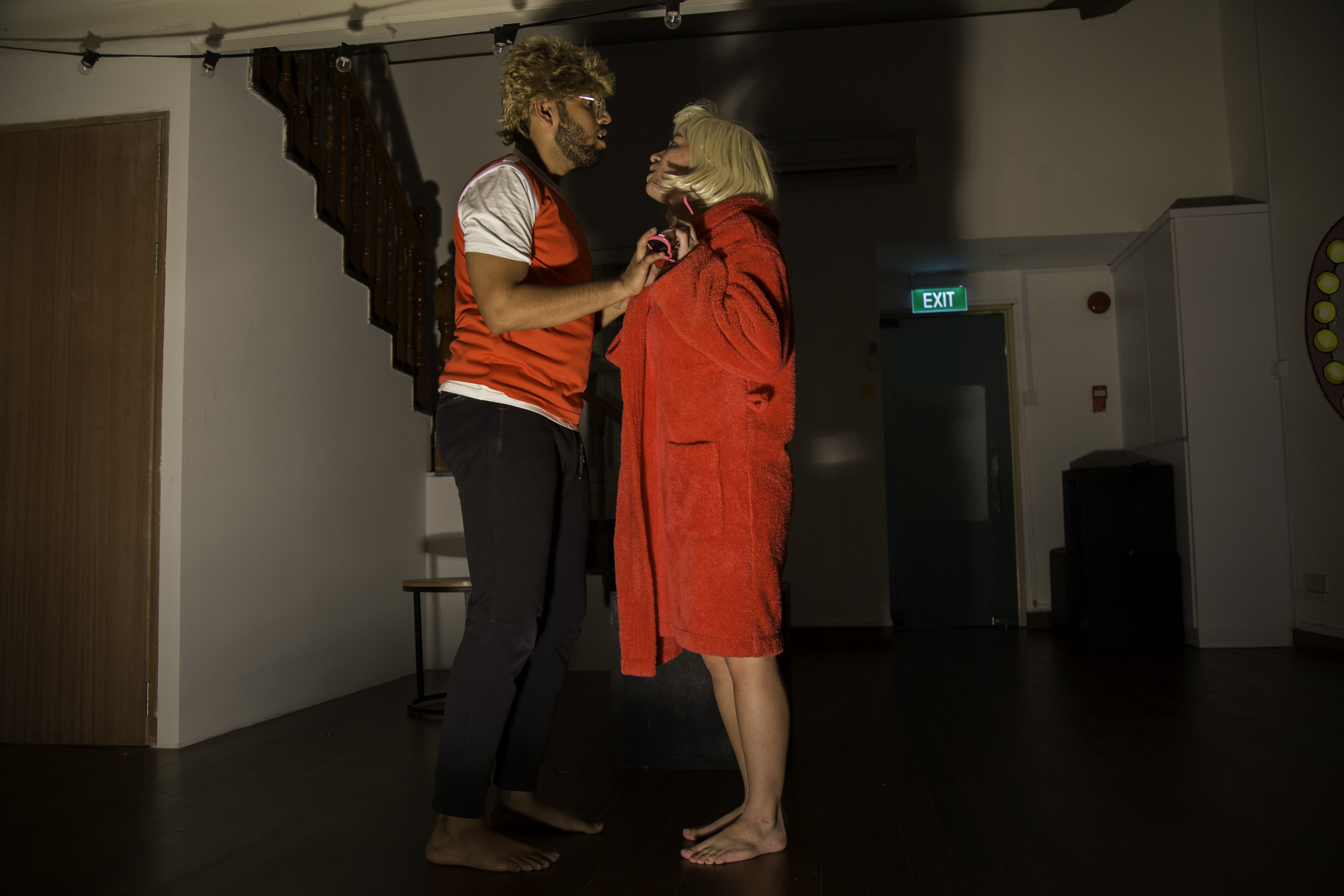 Which is precisely why it’s a pleasant surprise how in the final scenario, Patch and Punnet completely subverts their comic plot to unveil a far darker conspiracy beneath its otherwise surface-level exterior. It feels a little like a sobering comedown after a night of drunken shenanigans, and manages to pull this off somewhat successfully, bringing out themes of fatalism, regret and destiny. By navigating around a complete tonal shift by playing on the slowed down pacing of the final scene set in a futuristic old folks home, one is left feeling as if one has watched a production with deeper meaning than one that is simply comedy for comedy’s sake.

With their second production and a complete rebranding, Patch and Punnet seem to have grown to become more sure of themselves as a youth theatre collective, filling a previously unoccupied niche in the local theatre industry of creating comedic, fringe-like work easily accessible to new theatre audiences. There is potential and promise in this group if they keep at this and continue developing their craft, proving that there’s some value yet in the new perspectives and processes of these self-proclaimed ‘strawberries’.

Photos from Patch and Punnet

1 comment on “Review: Stupid Cupid by Patch and Punnet”