Love is the drug, and oh what a terrible, wonderful drug it is too.

For a four letter word, ‘love’, to this day, remains one of mankind’s greatest mysteries. At times absurd, most times frustrating, occasionally uplifting and always messy, it’s no wonder we’re practically obsessed with solving it, unable to live with or without it.

In French playwright Joël Pommerat’s The Reunification of the Two Koreas then, the attempt to define, or even dissect love in all its forms and occurrences feels like a task as gargantuan and impossible as the phenomena it takes its title from. Thinking a little further, one might even interpret the entire production itself as a metaphor for the reunification of North and South Korea, where the characters we bear witness to onstage become representative of the surge of emotions and potential conflicts citizens from both sides of the border may encounter upon reunification, a fundamental breakdown in communication due to the completely separate lives and mindsets they’ve grown up with. 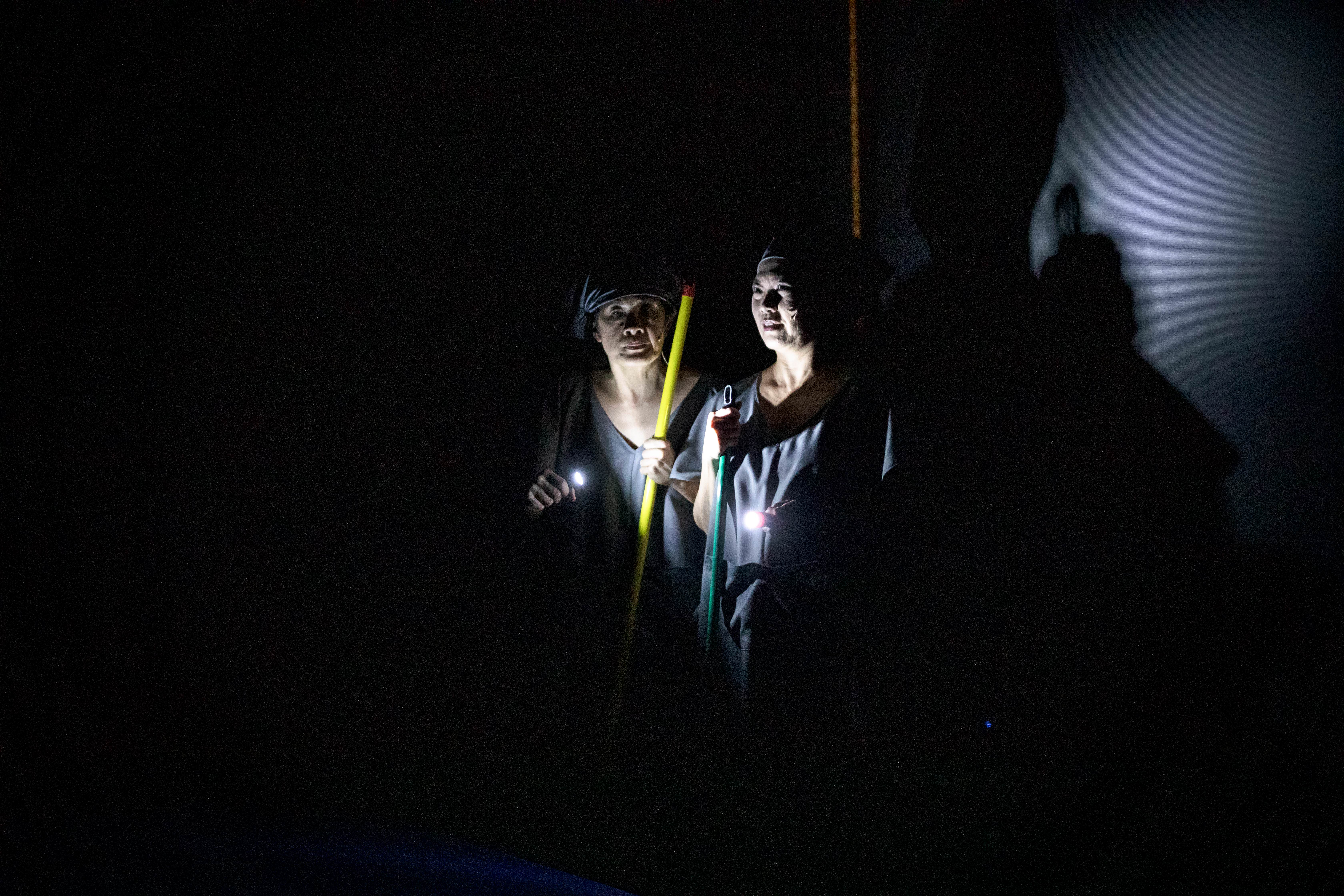 Translated by Marc Goldberg and directed by Jacques Vincey, the cast of nine play couples, lovers, friends and other relationships across the entire spectrum of humanity across the play’s eighteen (unrelated) scenes. Taking place in a modified ‘black box’ style space (set designed by Dennis Cheok), all we see is a blue stage on which the performance itself takes place, minimal to allow us to focus completely on the actors and scenes at hand. Surrounded by two floors of scaffolding holding the lights, translucent black cloth is stretched over it, acting both as a makeshift projection screen and also allowing for some of the lighting set up behind the stage to shine through it. Sound designer Bani Haykal sits on the second level, performing his emotional soundscape and music live throughout the production.

As we enter the space, the entire cast of nine is already present, visibly seated in a single row behind the stage and dressed only in sleeveless white tops and black pants. Flanked by clothes racks of costumes (designed by Afton Chen of fashion label Reckless Ericka), they don a new outfit in each scene, changing in front of us before discarding them after each one save for the final scene they appear in; this breaks the illusion of theatre, making us aware that the actors are each playing roles, raising the awareness that these characters, as fictitious as they may be, are in fact real people we may very well have encountered in our daily lives. 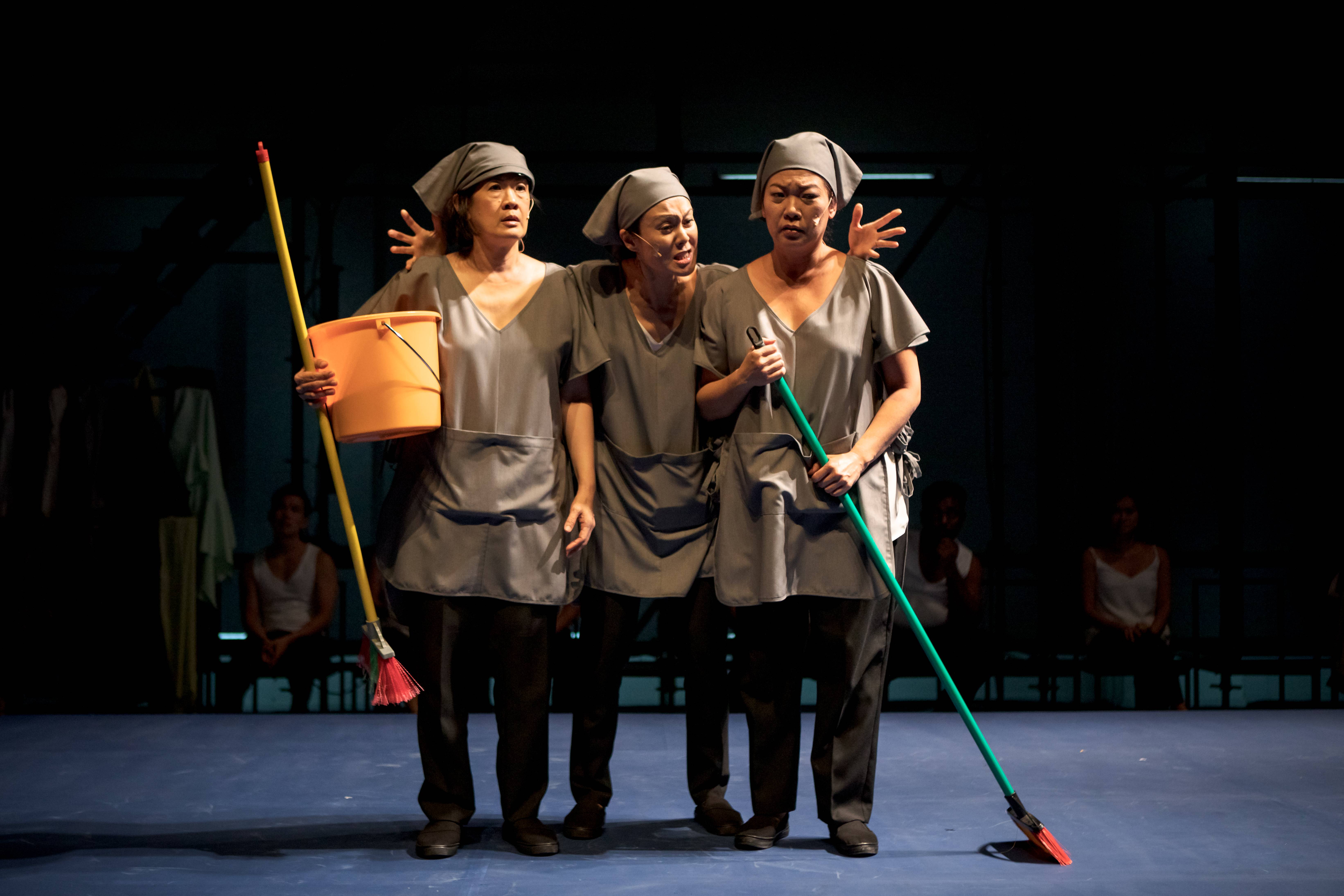 We open with Zelda Tatiana Ng taking the spotlight, a middle-aged woman on the verge of a divorce as the rest of the cast interrogate her about her decision, not menacingly but genuinely curious as to why she would arrive at such a choice. Her answer is simple: “there is no love between my husband and I”, and that, as unbelievable as it may be for some, is enough.

This scene then sets the tone for the remainder of the scenes, each asking what is love, exactly? The question echoes throughout, from the tragic, where Umi Kalthum Ismail and Cynthia Lee MacQuarrie play a couple about to breakup, kicking, screaming and demanding, to a laugh out loud scene where Timothy Nga and Karen Tan play a couple on their wedding day, only for things to go completely awry. In the latter, as absurdly hilarious as it is, the scene’s absurdity is precisely what belies the darkness underneath, where as close as you think you are to your family, everyone has skeletons in the closet, and perhaps, some secrets best left hidden away. 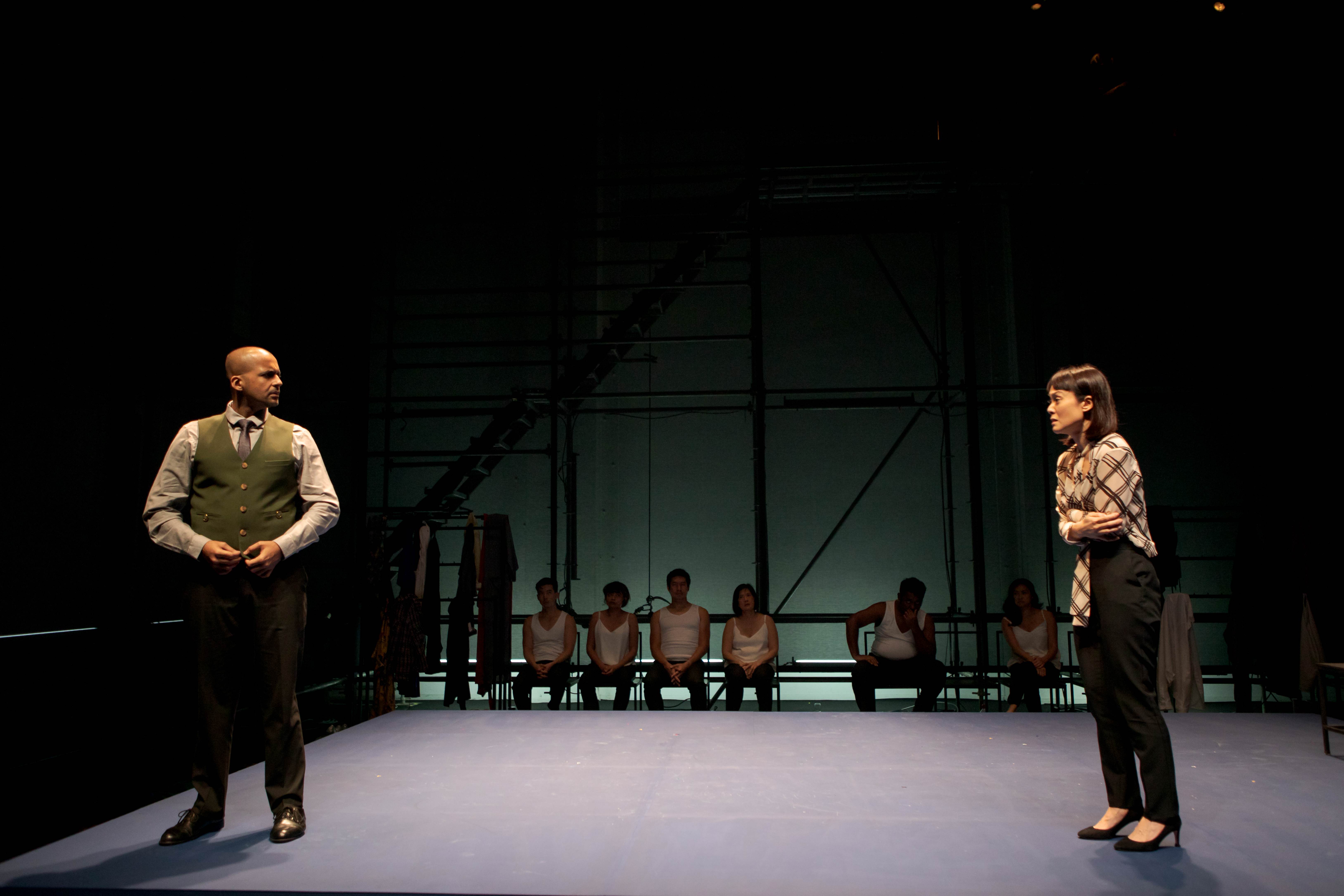 Each scene is a snapshot of life, capturing situations that while at times exaggerated, are essentially relatable for the core emotions that run through them. The sudden thud and blackout that punctuates each scene transition, emphasising the fear, betrayal, bewilderment, and surprisingly, hope that underscore these scenes, almost an assault on the senses each time. These fundamental emotions lend an authenticity to them that makes Reunification so utterly addictive to watch, like a car accident you can’t look away from at how so many of these lives are unravelling at the seams. These scenes may all be fleeting, and while all of them start in media res and end ambiguously, they give us enough to go on that we are left a little less broken from the catharsis of knowing we aren’t the only ones hurting in love.

As an ensemble, the cast displays a chemistry that is evident both on and offstage, watching the scenes play out while sitting in the wings and reacting appropriately. When onstage, there is undeniable electricity that runs through the theatre, with each actor given at least one crowning scene to showcase their talents. Timothy Nga and Cynthia Lee MacQuarrie, each as one half of a married couple (not married to each other) create an awkward sexual tension in the room the audience longs to break, while in another scene, Tan Shou Chen plays a teacher who defends his actions in the name of love in an impassioned monologue. 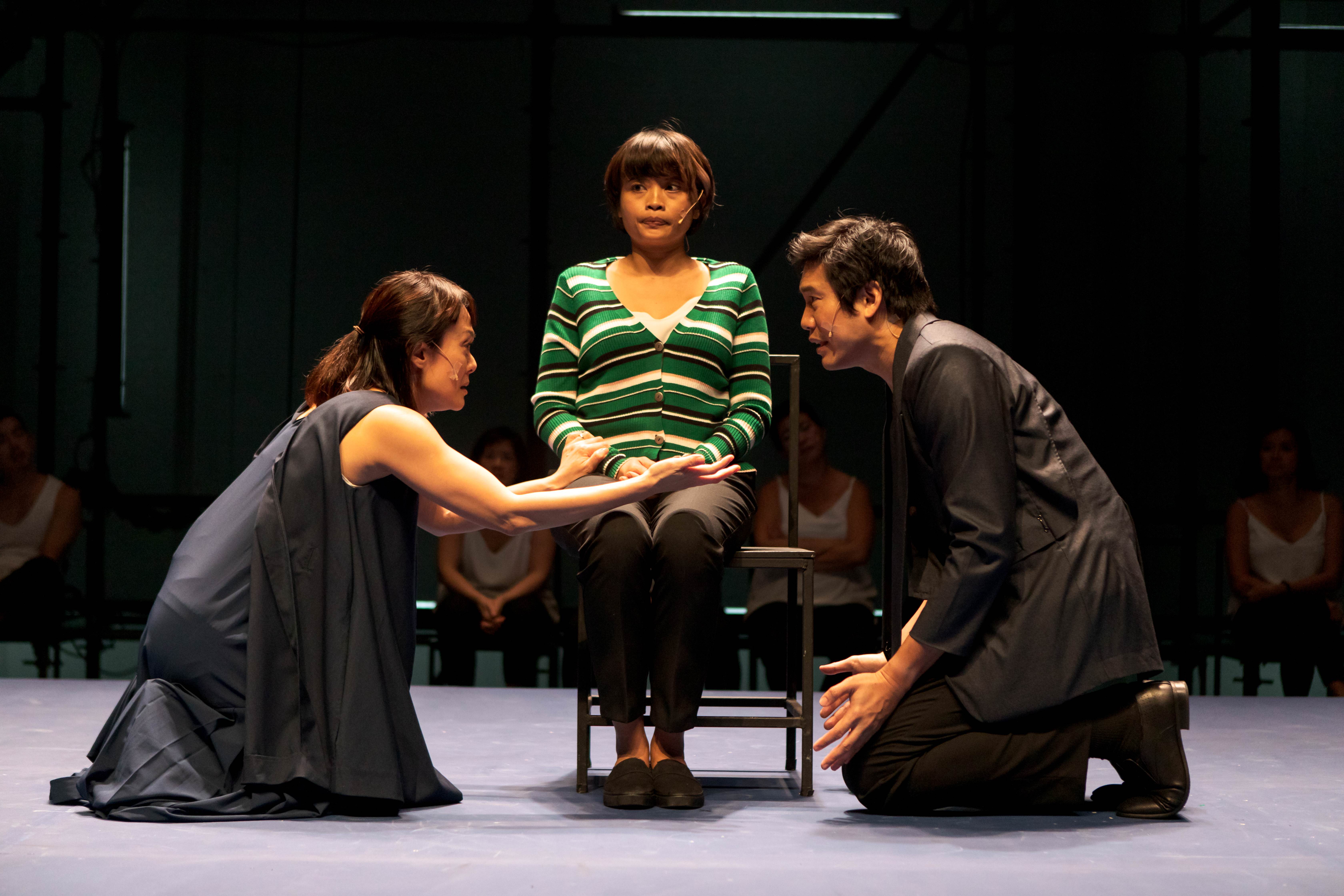 Janice Koh and Umi Kalthum Ismail are both chameleons in their own rights, shifting from self-righteous ex-wife to mousey colleague, freelance maid to unhappy fiancee respectively. Pavan J Singh and Karen Tan share what is perhaps the most hopeful of all the scenes, as a husband coming to a facility everyday to visit his amnesiac wife, constantly reminding her of who he is each time, annoying as it is, but always finding that spark again, while Karen does a pitch perfect scene with Ebi Shankara as an escort negotiating her relationship with a pastor.

In the final scene, Reunification symbolically comes full circle as Zelda once again becomes the centre of attention, a spurned street walker in desperate need of both money and intimacy, aching on the inside. Segueing into an achingly melancholic rendition of 月亮代表我的心, bringing out the song’s inherent sadness and longing as the rest of the cast return to the stage and waltz in pairs, as the lights fade to a blackout. This longing and desire makes us think back to all these instances of love we’ve just seen, all the miscommunications, the surprises these characters face and realize just how little they know of each other. We think of the secrets they keep to themselves, that the true tragedy is never being able to fully connect with another person, that there is a very real cost to desire and that to love is to knowingly enter into a social contract promising pain and pleasure in equal amounts. 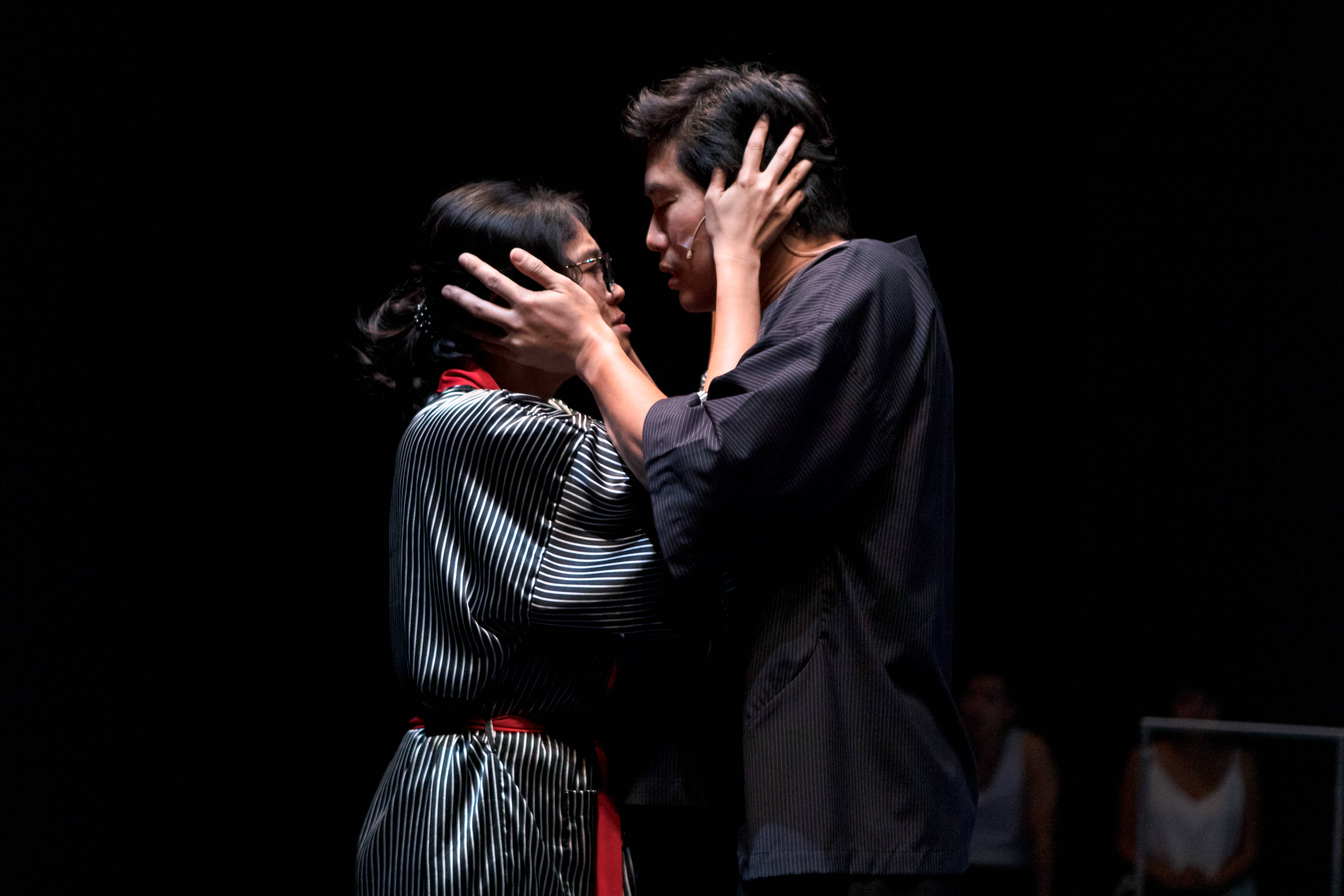 Love is a double-edged sword that cuts deep and leaves a wound that never quite heals; like the fabled reunification of the two Koreas, it is pure unbridled joy when a family divided comes together, yet at the back of their minds, they know it’s an uphill climb towards true reunion. The Reunification of the Two Koreas is Korea, is love itself – and if you’ve had the slightest experience going through human relationships in any of its facets, then this is a play that will no doubt find resonance in the most unexpected ways to pierce right through your past and future broken heart. As Umi puts it while playing a character who decides suddenly, without discernible reason to leave her relationship: “love is not enough.” Indeed it isn’t, and the road to love, paved with hardship, fights and turmoil, is one that one must willingly go into knowing they won’t leave unscarred.

The Reunification of The Two Koreas plays at 72-13 from 1st to 11th November 2018. Tickets available from SISTIC

1 comment on “Review: The Reunification of The Two Koreas by Theatreworks”